Thread: Have you ever heard the story about the gang of white outlaws who tried to rob a black-owned bank?

It's a story about slaves who actually received reparations, one of the most famous criminals in American history and a rich, all-black town.

Have you ever noticed why so many towns in Oklahoma re almost all black? Well, that's a part of this fascinating story, too.

Many people don't know that a lot of the Native Americans in what used to be called "Indian Territory" also enslaved Africans.

Some of these tribes fought for the Confederacy during the Civil War while others, namely the Muscogee or "Creek Indians," stayed loyal to the Union.

The reason some natives sided with the South was that the Confederates promised they would make the Indian Territory a state and let the Indians keep it. They were lying, though. White people from the South were constantly trying to move there and steal land.

The Muscogee, however, stayed loyal to the Union. Enslaved Africans even fought alongside them against the people we some people now call Confederates (I call them that, too. Mainly because "white supremacist traitors" is quite a mouthful.)

After the Civil War, the American government gave the former enslaved black Muscogee their own land. This could have set a dangerous precedent so, to get around giving reparations to ALL former slaves, the gov't made the "Creek Freedmen" official members of the Muscogee tribe

Remember, this territory was not an official state, yet but everyone knew it would soon be one. During the post-Civil War era, black people were tired of living around white people so they came up with a brilliant plan:

They started sprinkling black people in small towns all around the Oklahoma territory hoping that when it became a state, they'd do a head-count and say: "Oh shit, this place is full of black people!" White flight would ensue and we would have our own state.

The railroad was coming through the Indian Territory and a black woman named Abigail Barnett-McCormick owned land that she had inherited as a Creek Freedman. Her land was right along the planned railroad route and the railroad wanted to put a stop there.

The railroad company's lawyer thought the stop was a bad idea because there was no way black people could run a town But a railroad employee named Mr. Boley insisted they could. So in 1903 the town of Boley, Creek Nation, Indian Territory was founded.

Black people flocked to Oklahoma for the opportunity. They built an HBCU. Boley even had a black-owned electic company. (I'm also pretty sure this was when the electric slide was created.

One of the reasons people flocked to Boley and other parts of Oklahoma was because they thought this was going to be one of the few places where Jim Crow didn't live.

Southern Whites wanted to make the Indian Territory a segregation state but Roosevelt promised to veto statehood if they put segregation in the constitution. Blacks continued to flock to Okla. anticipating a non-racist, black state.

I know y'all smell the trickeration coming

Oklahoma didn't put segregation in its constitution and it became a state. But as soon as Oklahoma gained statehood, they passed racist, anti-black laws

I'm not being facetious. Literally, the first bill ever passed in Oklahoma is commonly known as Senate Bill 1, or:

Anyway, yall know we were disappointed. But instead of dealing with it, Black people just moved to black towns and supported each other. The black wealth started to grow. Places like Greenwood, in Tulsa, Oklahoma became known as "Black Wall Street."

Part of the reason the black towns were so rich was that, when Okla. instituted Jim Crow, those dumb motherfuckers essentially banned black folks from patronizing white businesses. So all the black folks traveled to nearby black towns to shop, dine, drink and be entertained.

But none of those places could fuck with Boley.

Remember, Boley was on a train route between two white towns. So black folks spent a lot of money there.

And in the center of town was the crown jewel:
Farmers and Merchant Bank 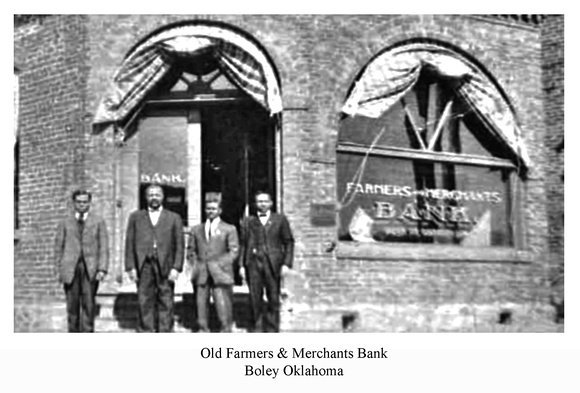 These were people who essentially LIVED in the WIld West.
They herded cattle.
They fought off white lynch mobs.
They were REAL black Cowboys so everyone knew not to fuck with those niggas in Boley.

White people knew this too.

In 1932, a gang of bank robbers set their sights on Boley's black bank. Now these were some crazy, white boys. If they had lived today, they'd probably be planning a school shooting or working in the Trump administration

But when the gang leader heard his homeboys were planning to rob Farmers and Merchant's, he was like:

But these crazy white boys wouldn't listen. So the gang leader said: "Look, y'all can go if you want to, but I'm just gonna chill. I'm trying to tell yall, these ain't the ones you want to fuck with."

"Don't be a fraidy cat. We've already scoped out the place. We're gonna go when there is only two people there: The bank president and the bookeeper. What the fuck are they gonna do?"*

*Again, these are not actual quotes although I do believe white people say "fraidy cat." Otherwise, where does the phrase come from?

Anyway, the gang went to rob the black-owned bank without their leader.

There were three robbers:
George Birdwell carried a .45 pistol
CC Patterson had a shotgun
Charles Glass was the getaway driver

They entered the bank and, just like they planned only two people were there.

But they didn't realize, these weren't ordinary dudes.

Early in the morning of November 23, 1932, Birdwell and Patterson burst into Farmers and Merchants, pointed a a .45 caliber pistol at the head of the president of the bank and told him:

DJ Turner, the bank president (Although that would be a great name for an actual DJ), just stood there. He knew he had another employee in the bank hiding and didn't want anyone to get hurt but he couldn't take watching these white boys empty his people's the money into a sack

So Turner said: "Fuck it," and pulled the alarm.

"Did you pull that alarm?" asked Birdwell

"I'll kill you for that," replied Birdwell, as he opened fire.

As soon as Birdwell shot, out of nowhere, the bookkeeper shows up! He wasn't hiding at all, this motherfucker had slipped in the vault and grabbed a rifle. He aimed it at Birdwell and shot him!

People from all across Boley, just regular people were waiting outside...

They had their guns. A LOT of guns.

And they weren't scared.

Glass and Patterson said: "Fuck this" and dropped Birdwell.

Patterson was wounded but Glass hopped in the car and tried to drive off but the people of Boley were like: "Fuck that, not with our money!"

And they shot Glass dead.

Birdwell the robber was dead, Glass the getaway driver was dead. Patterson was wounded and so was McCormick the bookkeeper, but both lived.

But thanks to the people of Boley, that notorious gang was now all dead in jail, except of course, for its leader who TOLD THEM not to fuck with those people in Boley.

Less than two years later, the FBI would name the leader of that notorious gang "Public Enemy Number One"

He would be caught and killed soon after, partly because he didn't have his gang to protect him. Now, he was killed when officers supposedly spotted him by accident.

But officers had tried to set up a trap for him two years earlier.

After that notorious bank robbery, police were SURE that this gangsta would show up and try to get revenge on the men who killed his partner. The code of the street DEMANDED IT.

So at the funeral of Turner, the bank President, more than 50 law enforcement officers showed up in plain clothes to see if this notorious criminal would show up to get his vigilante justice.

But he knew not to mess with people from Boley

The company that owned the train line that went through Boley eventually folded, farming died down and the Great Depression hit Boley hard. Today it is a tiny little town, although it is still mostly black

The only thing most people know about Boley is that every year, the town swells with visitors because, since 1907, people flocked to Boley every Memorial Day for the Black Rodeo, perhaps the oldest and biggest black rodeo in the country because people know they have REAL cowboys

Even white people go to that rodeo to see the black cowboys.

That railroad line that ran through Boley, the Fort Smith and Western Railway, also ran through a little town called Akins, Oklahoma.

Every year, kids would ride that train from Akins to Boley to see those cowboys. A lot of white people say the Black Rodeo was the only time they felt comfortable going to Boley. But one cute little white boy named Charley never got to go because his parents wouldn't let him

Charley would grow up, would ride the train often, but would NEVER get off on the Boley stop. He didn't mess around there.

That cute kid eventually became a famous bank robber who warned his friends not to rob the bank in Boley, to no avail.

But Charley is now buried in Akins, in what used to be Indian Territory, not far from where Turner is buried. He is still considered a town hero. You can even go visit his grave. You can even still visit the Farmer's and Merchant's Bank in Boley.

But if you go a few miles down the road to Akins looking for Charley's grave, people might look at you funny.

You have to ask for him by the name everyone called him: