History, it could be said, is horrible. The past is full of suffering, deprivation, and injustice. Sometimes, however, it's the telling of history that ends up somehow being more awful.

I was reminded of this, when researching German folk tales today. 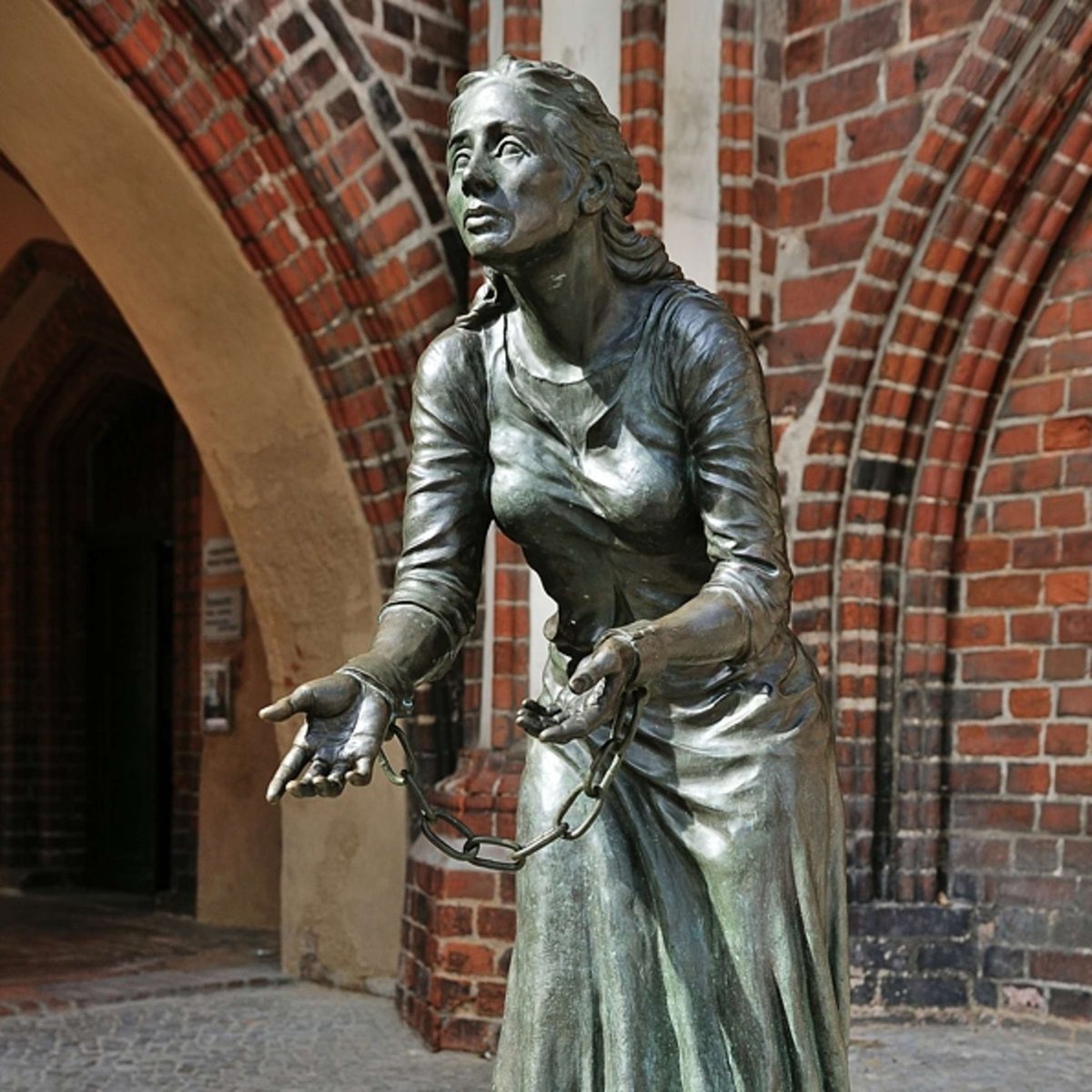 Tangermünde is a 1,000 year old town on the Elbe River, in the German state of Sachsen-Anhalt.

It was a center of culture and learning as the court of the Hohenzollerns, and was a bustling trade centre as a member of the Hanseatic League. 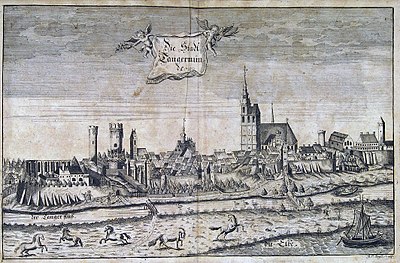 On that day, September 13 1617, almost all of Tangermünde was destroyed by a fire.

Hundreds of homes, warehouses and barns went up in smoke. One of the few buildings to survive was the rectory of the church. 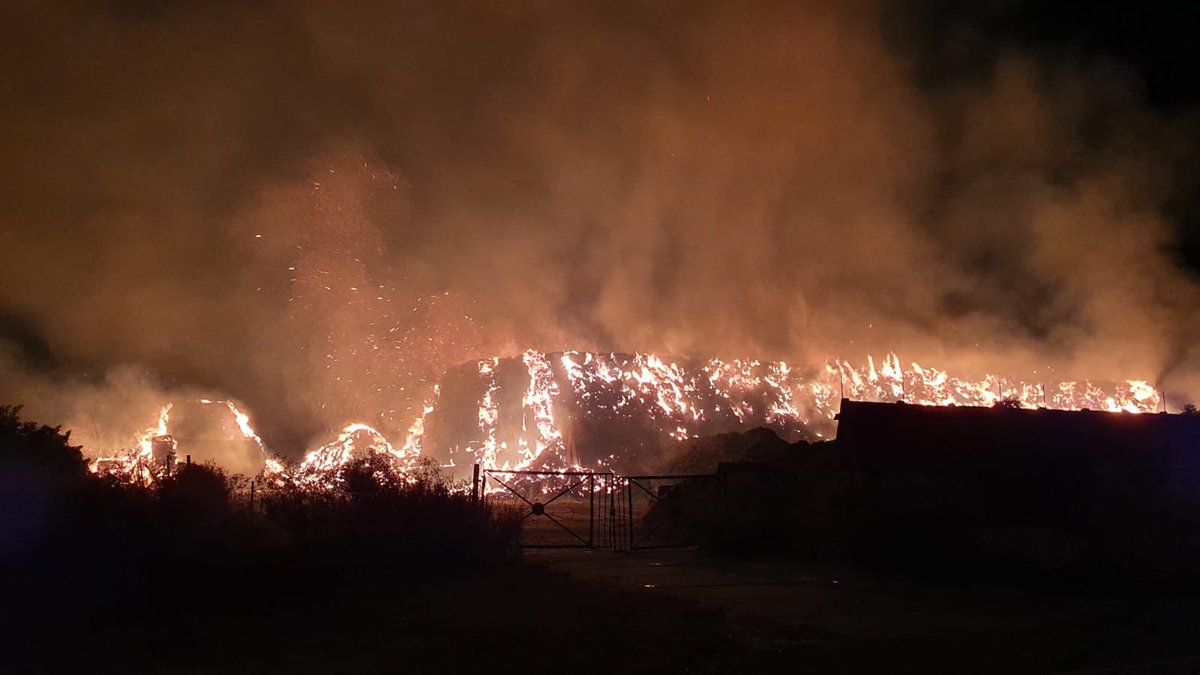 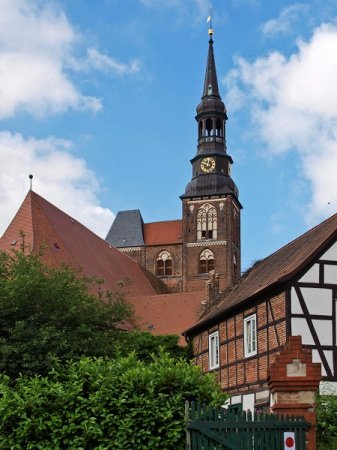 Now, if you believe the celebrated German author Theodor Fontane - and a surprising number of people do - the fire was the work of a young woman, Grete Minde, in an act of revenge. 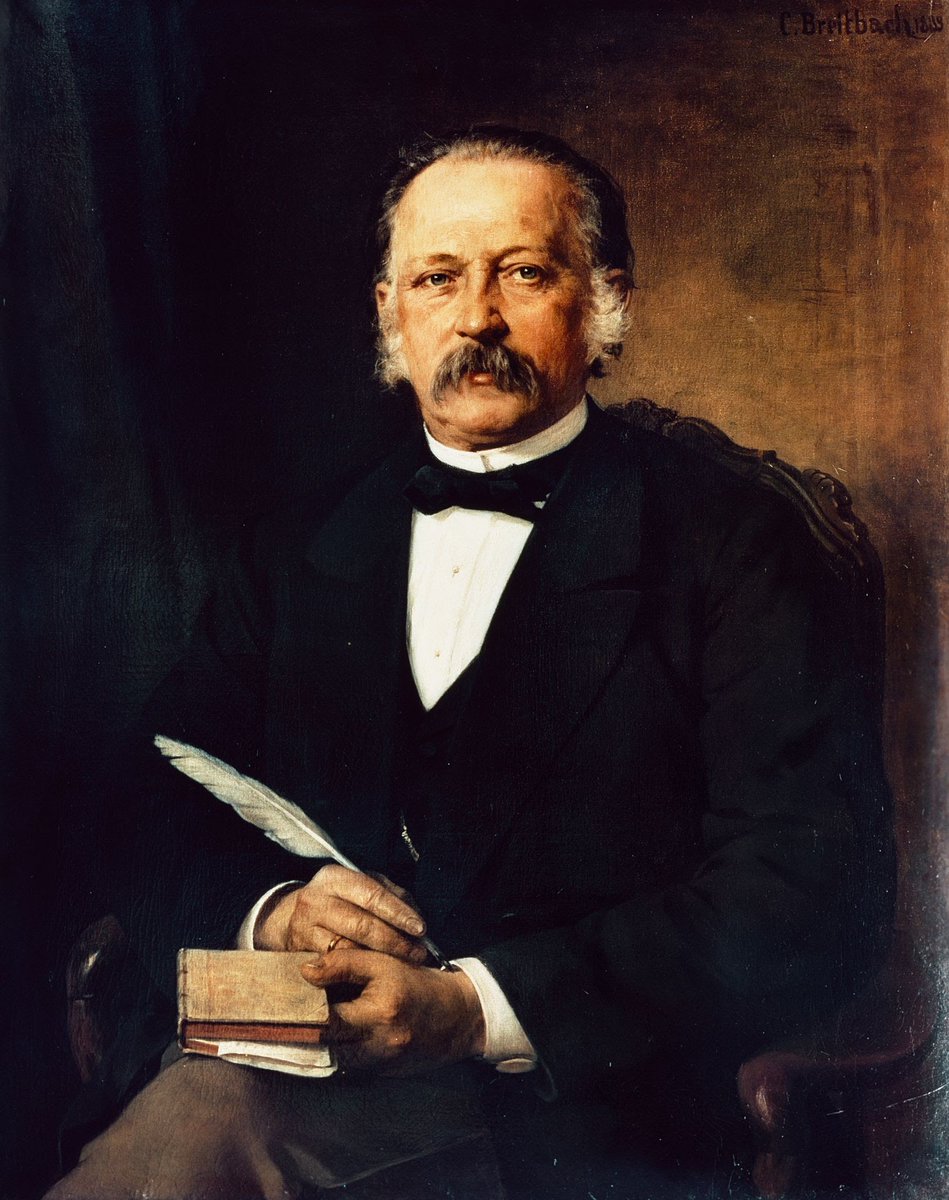 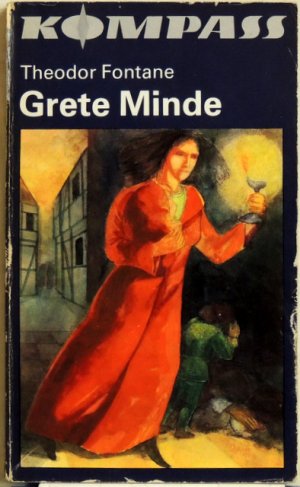 Grete, he claims, was a girl mistreated by her greedy stepmother, and scorned by townsfolk due to having a Catholic mother (in a very Protestant area). The only light in her life, it was said, was Valtin Zernitz, the boy next door, with whom she ran away. 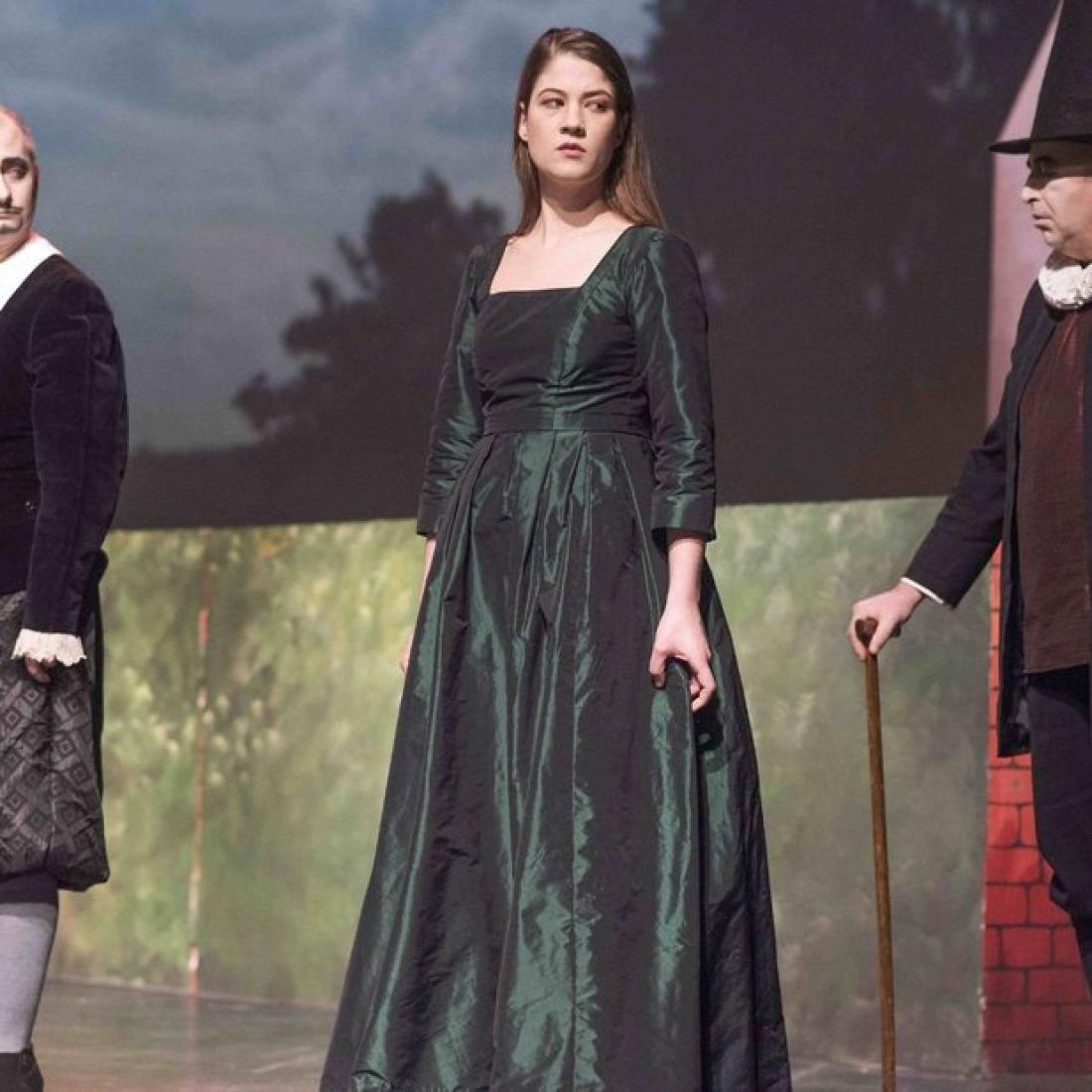 For three years, Grete and Valtin were happy. However, because this is a German tale, he of course, dies of a lingering illness.

The last thing he tells her is that she should go back to Tangermünde with her son, and get her inheritance from her greedy stepmother.

Of course, this being a 19th century work of Romantic fiction, the greedy stepmother refuses.

Not only that, she refuses to take Grete or her child in. They are left penniless, destitute.

This leads Grete to her breaking point.

She sets the city ablaze, and takes her child to the tower of the Stefanskirche, where she watches the destruction before the tower collapses, killing them both.

Sounds a little too dramatic? A little, let's say, operatic? Yeah, I thought so. Turns out that Fontane took the story from the work of an author, lawyer and politician, Ludolf Parisius, who uncovered the real, horrid story...

Margarethe von Minden came from a patrician family. However, her fall from grace came when her father had to leave town, after he was accused of murder.

Her stepmother even helped her with trying to get her inheritance, but she was only given a token donation.

She then met a soldier of fortune/brigand (pretty much the same thing at the time) called Tonnies Meilahn, who tried to help her get more of her inheritance. However, when it became obvious that this wouldn't work, he left to go be a highwayman with a nearby band.

Margarethe, by this time, was perceived by her family as an embarrassment, not fitting the patrician image they held.

So, they forced her out of town. Her and her child were reduced to begging.

Eventually, by August 1617, she ended up in a community called Appenburg, where her and her son and were taken in.

Margarethe was chronically ill by this stage and largely confined to her bed.

Of course, Tangermünde burned the next month.

However, Margarethe wasn't responsible. She was miles away.

She got the blame because when Tonnies was captured for robbery, he framed her - he was mad he'd never got any inheritance.

You see, the elders of Tangermünde needed a scapegoat for . Fires don't just happen - someone needs to light them.

When Tonnies was captured in 1619, they were under pressure.

In this case, Margarethe made sense - she had been run out of town, even if it was by her own family.

In March 1619, Margarethe was arrested and brought back to Tangermünde.

There, she confesses under significant, prolonged torture.

As we all know, such confessions are worthless.

On March 22,1619, Margarethe was led to the marketplace. There, she had her fingers removed with red hot pliers before she was beheaded. Her body was then burned at the stake. Her head was placed on a city gate.

If it makes you feel any better, Tonnies met the same fate.

Ludolf Parisius called the case an act of 'judicial murder', following his investigation, and he's right. For years he tried to raise awareness of the case.

However, Fontane's narrative was oh so much more captivating. It sold wildly.

It's taken decades for the truth to emerge.

Now, in the centre of town, a small statue commemorates Margarethe and explains her fate.

Despite this, the town still performs adaptations of Fontane's work.

At least someone has the balls to steal the chains from her occasionally, liberating her in a way. 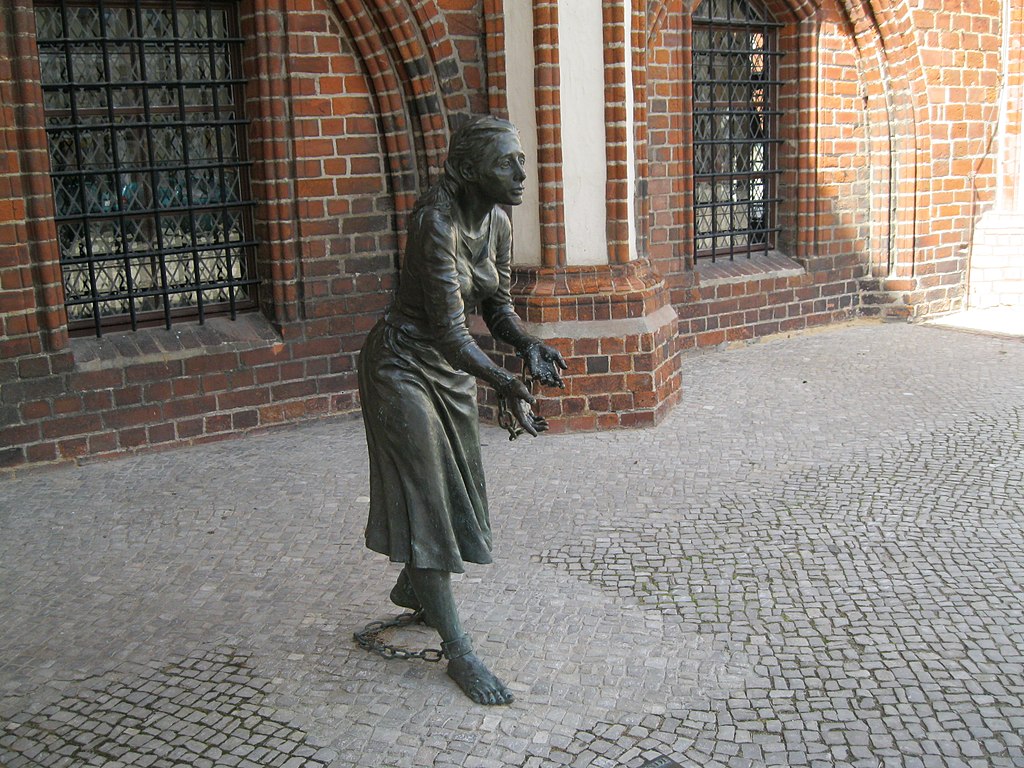 The crazy thing is, there's many tales like this across Germany - of victims of injustice, turned into villains, or vengeful madmen.

The shocking thing is, most of them originated in the 19th century, as writers scoured the past for inspiration.

Stories must be allowed to persist, but in cases where a narrative overtakes real history, we've got to remember the real people at their core, and remember them as we can.

We know that Margarethe wasn't a vengeful murderess, but a victim of a deeply misogynist age.

...and you know, isn't that more of a compelling narrative? /FIN