Good morning from New York, and grab your raincoats.

More for what’s likely to go on inside the court for the Michael Cohen proceedings today than outside.

Look out for the live-feed soon and read the story below. 🔽

Let's get the jargon reminders out of the way so that you can refer to it quickly later.

"Pro hac vice" = "for the occasion," as in to appear in federal court here, rather than California, where he's licensed.

Intervenor: A nonparty -- not a plaintiff or defendant -- who has an interest in the case.

Trump and the Trump Organization have been granted intervention so far.

Now, Avenatti wants it to be Stormy's turn.

Special master: The court-appointed attorney in charge of a certain aspect of discovery.

Here, retired federal judge Barbara Jones is the special master in charge of sifting through the files seized in the FBI raid of Cohen's properties for attorney-client privileged materials.

Have you come across any other jargon related to this case that you need a refresher on, or any other questions related to these proceedings? Let me know.

Roughly 30 minutes to go before we begin.

Guys, I meant questions for which I know the answers! You all are really sharp observers, and I'm going to use your crowd-sourced inquisitive minds for my own research.

Just noticed a sentence from Judge Jones' report from yesterday that caught my attention.

"It is understood by all the parties... that the special master will not conduct a review of all material for responsiveness."

Responsiveness: Relevance to the underlying warrant/probe.

That's a win for prosecutors, who were concerned about whether a responsiveness review would mean a special master "mission creep."

They wanted Jones to assess privilege and privilege alone. Of course, she's now also assessing whether the files are "highly personal" too.

So there was probably some horse-trading between prosecutors, Cohen and the intervenors about the scope of Judge Jones' review.

Wood: I'll begin by seeking the government's update on its production of material.

Prosecutor: Government completed its rolling production, except for two things: Blackberrys and the "contents of a shredding machine"

Prosecutor says that the contents of that shredding machine are "not voluminous."

They've gone through 1.3 million of them.

"We're about a third of the way through the materials we received from the government."

This is Todd Harrison speaking for Cohen.

Harrison: "We estimate that we will be done with the review possibly mid-July."

Wood: Let me hear from the gov't about the reasonableness of the proposed deadline.

Wood worries that it is taking too long.

"It sounds like we may have to revert to the taint team," she says.

Employee developed a "tremor in his hand" from lack of sleep. Worked over the long weekend. Sleeping in the office, he says.

"I can assure the court that we're working around the clock," Harrison says.

Wood asks how many lawyers are working on this.

Wood: "By mid-June, you need to finish the balance of the production that you've had to date."

AUSA Maimin pivots back to the two BlackBerrys and the contents of the shredder.

The BlackBerrys may belong to Cohen's wife, Harrison says. (He says he doesn't know for certain because the devices are so old.)

Prosecutor Maimin says that she just learned that, and she may go to her with help in opening them.

Prosecutor Maimin says the government takes no position on the pro hac vice motion and does not take a position "at this time" on the motion to intervene.

Avenatti: We have no issue and we agree with the government that that should be held in abeyance.

(It may not be necessary, he says.)

Part of that involves the audio recordings between Stormy Daniels and her ex-attorney Davidson.

Avenatti says that he received a press inquiry from a reporter who heard the audio tape of that conversation. Recorded by Cohen, involving Davidson and Daniels.

"I'd be shocked" if the U.S. Attorney's Office leaked that to the press, Avenatti says, narrowing down the leak to Team Cohen.

Daniels did not waive her privilege, Avenatti says.

"From what I've been told there are other recordings" between Cohen and Davidson related to privileged information about Daniels.

Wood: It seems to me you have no standing to make these points unless you want to intervene.

Avenatti pivots to the pro hac vice application, saying it's "unusual" to deny it and have opposition.

Referring to Avenatti's disclosures in the report on Cohen, Avenatti says: "There's been no linkage between that information and this proceeding."

"Your honor's been on the bench for a very, very long time," he notes.

It's not her first high-profile case, either, he adds.

Avenatti says he's an "exemplary" member of the bar, and he would be prepared to address any questions Wood may have

Wood says granting Avenatti's motion would not give him the "roving" ability to comment on whatever he'd like. Just this matter.

Wood notes that the parties have been sharing the cost of the special master 50-50. Half government, half Cohen and intervenors.

Stephen Ryan (Cohen's attorney): I have never seen an attorney conduct himself in the way Mr. Avenatti has.

He calls that alleged act "entirely reckless and improper."

Ryan: "It was a drive-by shooting of anyone named Michael Cohen."

Notes that Avenatti disclosed information about another Cohen. (The Canadian one.)

Ryan: "My phone rang off the hook, the day before, during the day" Avenatti released his report

"If you want to know about leaks to the media," Ryan says that Avenatti leaked to print and TV outlets that cay.

"It was a premeditated drive-by shooting of my client's rights."

Ryan: "This is about the aggrandizement of a single attorney and his client."

He refers to Avenatti's 170 appearances on TV.

Ryan: If we had released those audio tape to a reporter, it would have been the biggest story in America. It has not occurred.

"I am unaware of any release of an audio file of this kind."

Ryan: "I apologize for the vehemence in which I've approached this morning."

"Who knows what's gonna trick out next week," he adds later.

Avenatti says there's "no evidentiary basis" for Cohen's allegations because "we did not."

And there's no connection between that and this matter.

"We haven't been contacted by the Inspector General." Nor the Treasury Department. Nor the Justice Department.

Wood says he has a different view from Avenatti.

"In my view, this matter which is a potential precursor to a criminal trial against Mr. Cohen if charges are filed..." which she says means Avenatti would have to stop doing much of what he's been doing.

She says no more "publicity tour," which she says she does not mean in a "derogatory" way.

Wood says that such conduct could potentially taint a jury pool, if such a thing would happen "way down the road."

Wood: You would have to move to intervene, and you have no particular portfolio to intervene here unless there are Miss Clifford's rights that you are protecting.

Avenatti says that his concerns have been confirmed because Mr. Ryan said there were recordings "under lock & key."

Ryan responds to that.

"We're burning money in a rate that candidly, I don't think that I can even increase."

Wood says that she can turn the matter over to the taint team, if that's the issue.

Wood: "What I'm considering in addition is the fact that the special master can keep up with the production."

And Jones can keep up in a way that Team Cohen cannot, Wood says.

Ryan: We've already made compromises to meet the court's deadline... We're only reviewing documents that make a hit on the search terms for privilege.

Ryan says he needs more than the June 15th deadline.

Trump attorney Joanna Hendon says that she believes that the special master's firm has a different (smaller) task that Cohen's team, and she proposes an alternative.

"I know that your honor is keen to keep us on a fast-track," she says.

Hendon says that they join the motion opposing Avenatti's pro hac vice application on behalf of the president.

"When I came into the courthouse this morning, there was a podium with eight microphones," she said.

Nobody asked to interview her when she walked in, she notes.

Avenatti walks to the podium.

"Mr. Trump had adequate notice of my pro hac vice motion," he notes, adding that the president didn't file anything.

Addressing the bankruptcy matter, Avenatti says that's a different firm that does not represent Daniels.

Avenatti slams "palpable" irony that Trump has had his own "fair share of bankruptcies over the year" and also uses Twitter.

Hendon addresses Avenatti's talking point about the other firm in the bankruptcy matter, and she submits an exhibit with the court.

These involve Avenatti's emails to counsel to the president from that other firm on another case in the Southern District of New York, she says.

Hendon: Avenatti was "not straightforward," "not open" with the court in his affidavit.

Hendon: "When someone is prepared to be not straightforward, and cute," on the tiny matters, it calls larger matters into question.

Her exhibit is marked Intervenor Exhibit #3, and it is received.

Wood tells Avenatti: "Until you are admitted here, I don't expect you to stand and be heard here."

No ruling on either of his pending motions. Hearing adjourned.

Upshot: Judge Wood just read Michael Avenatti the riot act, but she was not necessarily unreceptive to either of his motions.

Look out for a story TK.

While I have you here.... #shameless  https://tinyletter.com/KlasfeldReports

By the way, unlike every other hearing, Michael Avenatti took no questions after making a brief statement.

My colleague @FRIED_ALIVE says that Avenatti "darted off" pursued by cameras.

Some extended thoughts here, plus a link to the story with colleagues @amandaottaway and @FRIED_ALIVE.

This is a developing story, update TK.

In case you missed it, Michael Avenatti withdraw his pro hac vice motion. 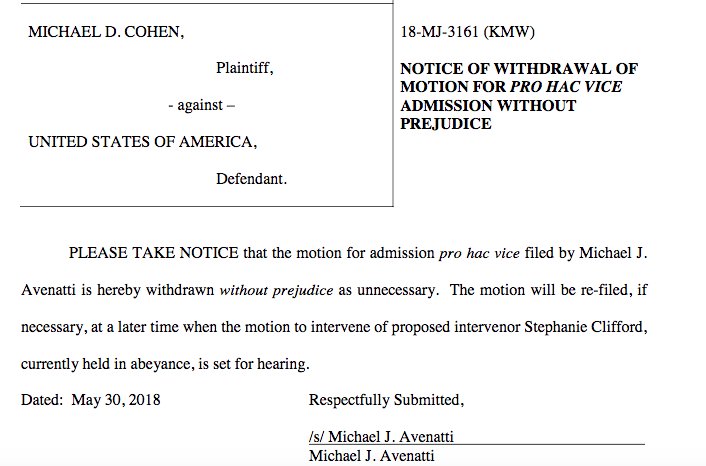