1/ He cued me. So here is thread on what MARKETS can learn from BIOLOGY...

2/ I like analogies coming from other disciplines outside of investing + VC. They help lower my own ignorance + have universal principles useful in many facets of life.

To the man with only a hammer, every problem is a nail.
It’s fun to add new mental models to your own toolkit—

3/ Here are two interesting examples in nature of phenomena that may hold relevant: the first is interesting to know + remember; second may be useful to see what may be have been going on in investing markets over recent years...

4/ From the time you are born until age 3 or 4—-there is a rapid + exponential increase in the number of synaptic connections in your brain.

Then what follows is a precipitous pruning (as @mjmauboussin has noted) 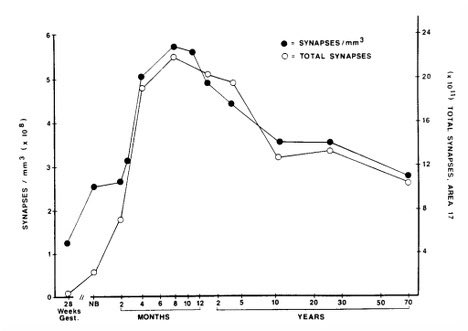 5/ Who cares?
-Anyone entering an industry or betting on early entrants to win.

Why?
-b/c this same chart pattern has played out time + time again in the business world (as evidenced by the following charts also c/o Michael)...

Here is the graph with PC + disk drive: 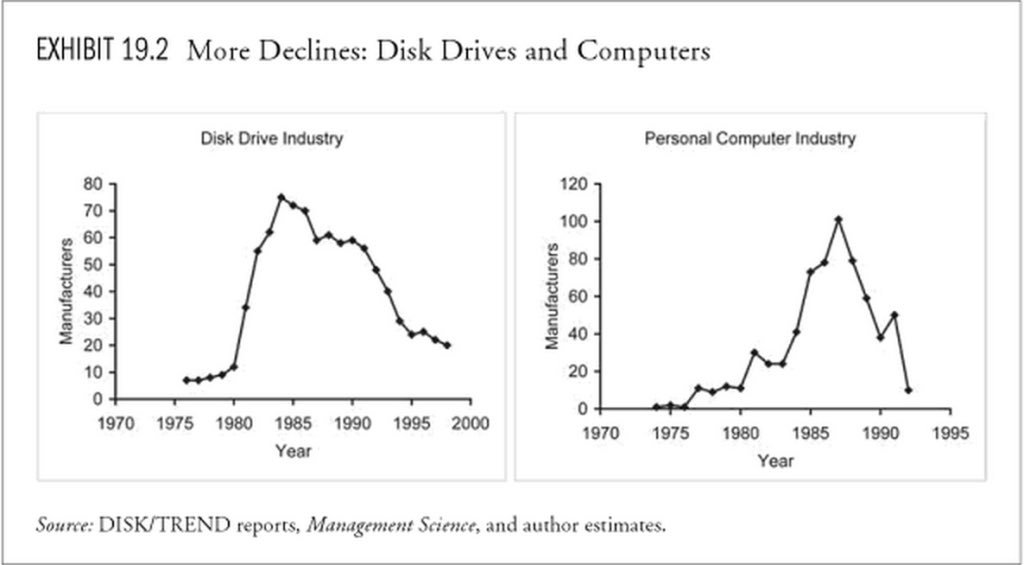 6/ Notice the incessant birth + death of synapses, messy & inefficient, seems to be a universal lesson for entrants in new industries: And then there were but a few. 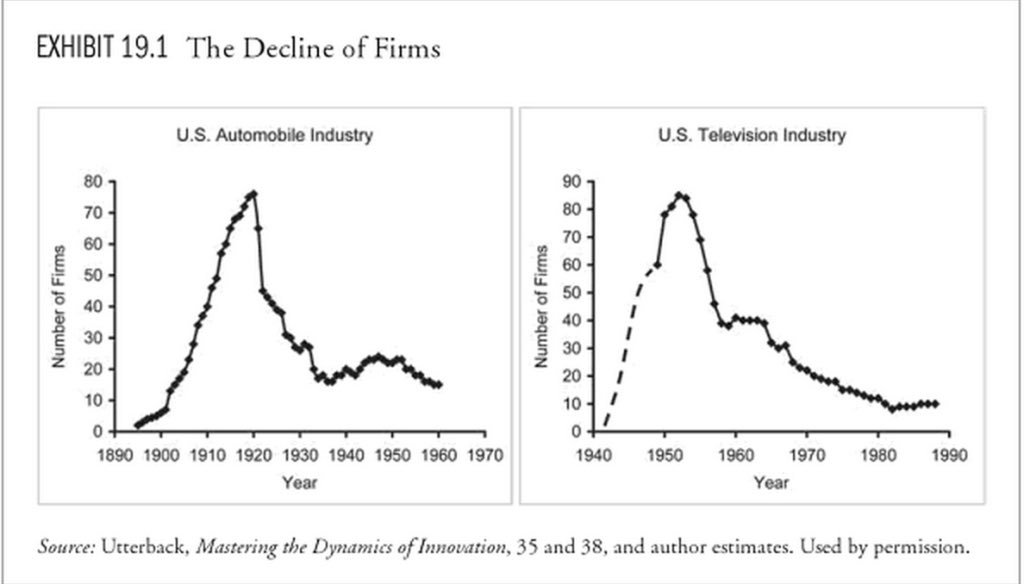 7/ You cannot predict the specific companies, but you can put high probability on this general shape of entrants + survivors (individually rational, collectively irrational)

Here of course is the internet. 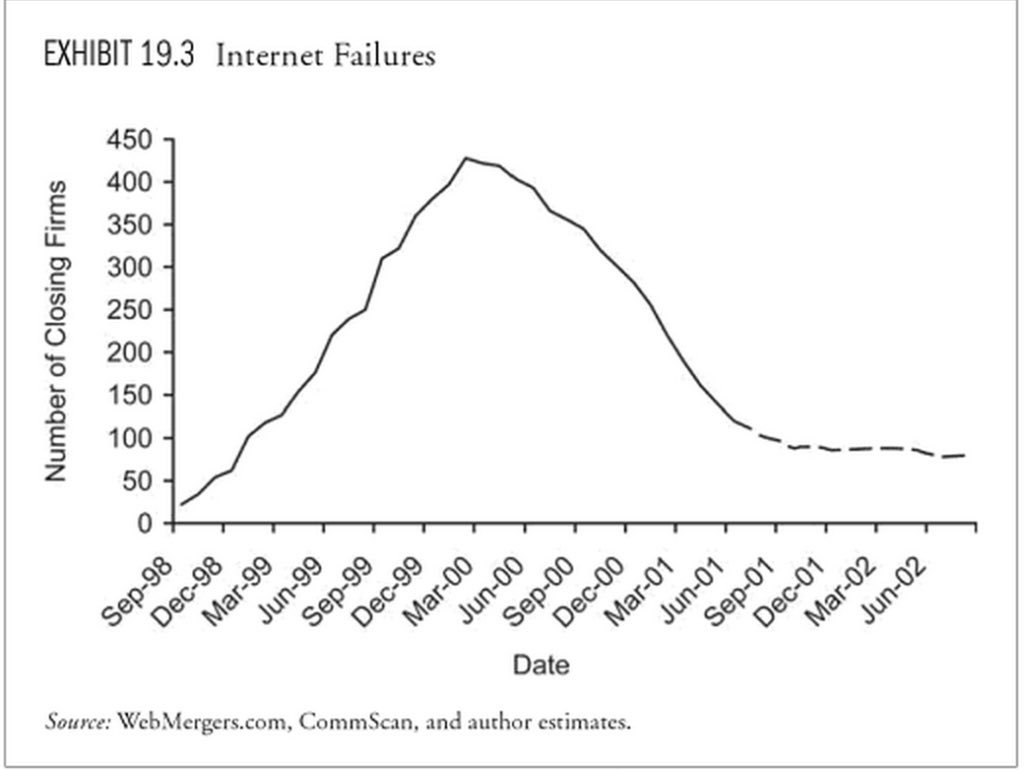 8/ Another analogy we’ve catalogued from nature with insights for markets: the SLIME MOLD.

9/ As long as food is abundant, it exists as a single cellular organism + can venture out looking for more food.

But when food gets scarce, warning signals in the form of chemicals ripple through, sending the single cells congregating into a single mega body.

10/ With abundant cash sloshing about—people are widely acting like the slime mold.

If you have friends that are or were bankers, lawyers, accountants or consultants there are quite a few over recent years that’ve tried startups or even VC or angel investing...

11/ If you had friends that weren’t the “smartest” or hardest working who raised a lot of money at what you heard is a pretty high valuation—it might have motivated not just you, but others to go + try the same thing. “If that guy just raised money, I can do it!”...

12/ In this process, LOTS of startups are forming + hiring.

The main and obvious beneficiaries?

13/ If + when rates rise, VC + angel money pulls back, the operating leverage the landlords + owners get on the way up will hurt on the way down as startups without funding lay off people, downsize and can’t pay rent...

14/ Shockingly, this very scenario took place 15 years ago and landlords went from taking equity in their startup tenants to demanding 6-12 months cash up front in case they weren’t good for it.

15/ Today we are still in the “slime mold” dispersion phase. Resources are abundant. Every experiment is being tried. Many will do amazing things. Most will fail.

But the byproduct of their detritus will be the fodder for the next wave to recombine into more useful things...

16/ At some point, many will abandon their adventures + head back to the safety, security + predictability of motherships (like McKinsey, Goldman, JPM and Deloitte).

Sadly and too often the pressure of family expectations, significant others + in-laws often demand it...

17/ The real question is when?

But everyone has a feeling something is awry.

My best measure of “when?” is based, in a Keynesian beauty contest way, on an expectation of other people’s expectations...

18/ I have been regularly polling people over the last few years as to when they think that this boisterous cash abundant environment ends.

Some incorporate anecdotes and references to macro economic forces....

19/ Some invoke Mohammed El-Erian, referencing a “New Normal” + tout those timeless and dangerous words “this time is different”, referring to the virtue of better capital efficiency, being able to do more with less —while conveniently forgetting the corresponding vice...

20/ Lower barriers and many more entrants make it harder for investors to see all, let alone pick winners.

Some point to central banker benevolence printing $ to stave off deflation, induce inflation, reduce unemployment, devalue currency against sovereign debt and interest due

21/ Some point to the historically relative low, zero or negative yields available for government bonds, rising equity prices and declining earnings yields–in short the absence of yield in otherwise safe places that have “forced” investors to make riskier investments...

23/ I track what % of people I polled + spoke with on a given week said “two years”. 4 years ago from a pretty diverse sample set ranging from cynical short sellers + deep value equity investors to CEOs, VCs and bullish entrepreneurs it was 10%...

24/ Remeber this is small sampling of people imperfectly and not very empirically polled,

25/ My speculation has been when 80% of my imperfect sample size measure answers “2 years”, then things turn. Markets discount expectations.

With all the anecdotes, weak signals + empirical evidence of experience and varied vantage points—

26/ When the incremental believers are fewer and further between—-what likely happens is this: first the RATE of available incremental resources, incremental buyers slows, then it declines— the slime mold retracts.

Nature is beatifully gross—so are markets.