LINT. On my way up to the studio tonight to debate Dersh, I was reflecting on my Fed Crim Law class I took at @YaleLawSch with Professor Abe Goldstein. I looked up his bio, and thought it might interest @JesseBWatters, who apparently thinks he can assess the value of immigrants

2. I pulled up Professor Goldstein's obituary (he passed away in 2005) from the Yale Law Report. He was the fourth child of Ukrainian immigrants, fruit and vegetable pushcart owners who only spoke Yiddish at home.

3. He served in the army as a demolition specialist and counterintelligence expert, and attended Yale Law School under the G.I. Bill. What he had to say about attending Yale: 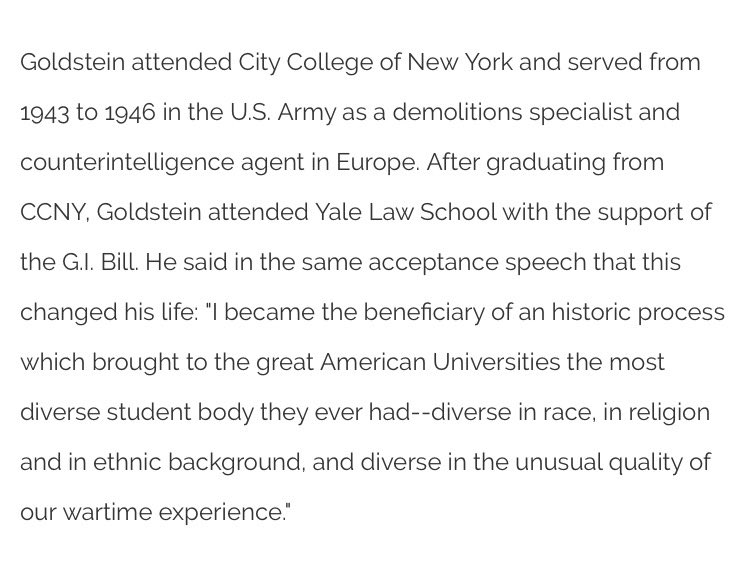 4. He spent several years at a D.C. law firm, defending people who had been accused of lying to the State Department Loyalty Board during the McCarthy era. When he was recruited to the faculty at Yale, here were his thoughts:

6. Just saying that before you go knock "someone's uncle from Zimbabwe" or people who don't have skills or speak English or have an education, @JesseBWatters, you might want to consider that their children might end up better educated and more successful than you. 🤷🏽‍♀️

P.S. Professor Goldstein's crim law class was awesome and I rocked it. And oh, I'm the daughter of immigrants and didn't speak English till I was 5.