(Thread) Trump and the Russia Mafia

What’s “collusion” got to do with it?

Spoiler: The word is entirely inadequate and misdirects the inquiry.

Fact: Trump was bought and paid for by the Russian mafia.

Mogilevich got his start as a young man in the Soviet Union (SU) scamming his fellow countrymen who wanted to emigrate. He offered to sell their assets & send them the money, but instead, he pocketed their money.  https://www.theguardian.com/world/2008/jan/25/russia.lukeharding …

2/ His victims had left the country so they couldn't do anything.

By the mid 1980s, he had millions and needed to launder it.

Money laundering means putting illegally obtained money through a few complicated transactions to hide the origins of the money.
https://www.law.cornell.edu/wex/money_laundering …

3/ Mogilevich knew it made no sense for a young man in the SU to have millions—so in 1986, he sent his operative to buy 6 luxury condos in Trump Tower.
https://www.justsecurity.org/60528/understanding-pres-trump-vs-bruce-ohr-russias-top-crime-boss-semion-mogilevich/ …
Foreigners, by this time, discovered that money could easily be laundered through US luxury real estate.

4/ It should also have occurred to Trump that a man in the SU hadn’t come by $6 million in cash legally—but he asked no questions. He permitted anonymous buyers to purchase his condos, so he was a magnet for dirty money.

He personally attended the closing of Mogilevich’s condos.

5/ The Soviet government owned all resources and industries.
When the SU broke up, the Russian Federation was established as a constitutional republic with president and parliament chosen by free elections.

But democracy never took hold. Before rule of law was in place . . .

6/ . . there was a wild rush to control the nation’s industries and resources. A few people became billionaires (by stealing what belonged to the people).

7/ One of the new billionaires was Mogilevich, who was soon at the top of the Russian mafia and on the FBI’s Ten Top Most Wanted List (for a scam in PA)  https://www.fbi.gov/wanted/topten/topten-history/hires_images/FBI-494-SemionMogilevich.jpg/view …

As the oligarchs wealth grew (mostly through scams) they looked for ways to launder the money.

8/ By the late 1990s, Trump was considered uncreditworthy and bankrupt. He owed $4 billion to more than 70 banks, and showed no inclination or capacity to repay the money. (Source for a lot of this info👇)

Russians, through shell companies, bought his condos and propped him up. 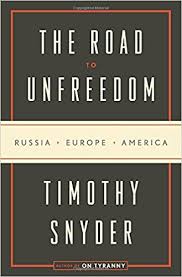 9/ In 2002, after Trump went belly up in Atlantic City, he was bailed out by Bayrock, a real estate development company with ties to Mogilevich.
Bayrock moved into Trump Tower.
Felix Sater was senior advisor to the Trump Org. and partnered with Bayrock.
https://www.justsecurity.org/60528/understanding-pres-trump-vs-bruce-ohr-russias-top-crime-boss-semion-mogilevich/ …

In 2006 Russians financed building Trump SoHo & gave Trump 18% of the profits, though he invested and did nothing.

11/ “Russians make up a pretty disproportionate cross-secton of our assets. We see a lot of money pouring in from Russia,” said Trump Jr.
https://www.washingtonpost.com/opinions/a-history-of-donald-trumps-business-dealings-in-russia/2017/11/02/fb8eed22-ba9e-11e7-be94-fabb0f1e9ffb_story.html?utm_term=.1a7a10c02e06 …
April 2013: The FBI arrested 29 men for running gambling rings in Trump Tower.

12/ The gambling ring was overseen by Alimzhan Tokhatakhounov, a Russian who also ran a money-laundering operation from a condo in Trump Tower directly under Trump’s own.

(The FBI raid was authorized by Preet Bharara, who Trump fired when he became president. Coincidence? Nah.)

13/ While the FBI was searching for Tokhatakhounov, he was sitting a few seats from Trump at the Miss Universe pageant in Moscow.

Speaking of the pageant, Aras Agalarov, a Russian, helped Trump bring the pageant to Russia, for which Trump pocketed $20 million for doing nothing.

14/ The Agalarov family offered to help when Trump decided to run for President, and initiated the famous June 2016 Trump Tower meeting. (Coincidence? Nah.)

What came next? You can pick up the story here, at Tweet 3:

15/ Most of this info was available, but the 2016 election coverage was dominated by Her Emails.

Why? Because Americans weren't prepared for Russian style propaganda & disinformation.

And because spreading simple lies is easier than understanding—& talking about—complex crimes.

16/ Even now most Americans don’t understand what is happening.

(Next thread, probably Thurs: what we can do. Spoiler: Understand what's happening & work to strengthen our institutions. Institutions don't work without people making them work. Source 👉  https://www.csis.org/analysis/countering-adversary-threats-democratic-institutions … )