Pre-dawn rise to cover today’s #UNGA speeches for the start of general debate.

By tradition, Brazil’s up first. Then, it’s Trump followed by Ecuador’s Lenin Moreno, Turkey’s Recep Tayyip Erdoğan and a dozen other speakers in today’s morning session.

Diplomats milling about in anticipation of the first day of UNGA general debate, as reporters, photographers and videographers look on from above. 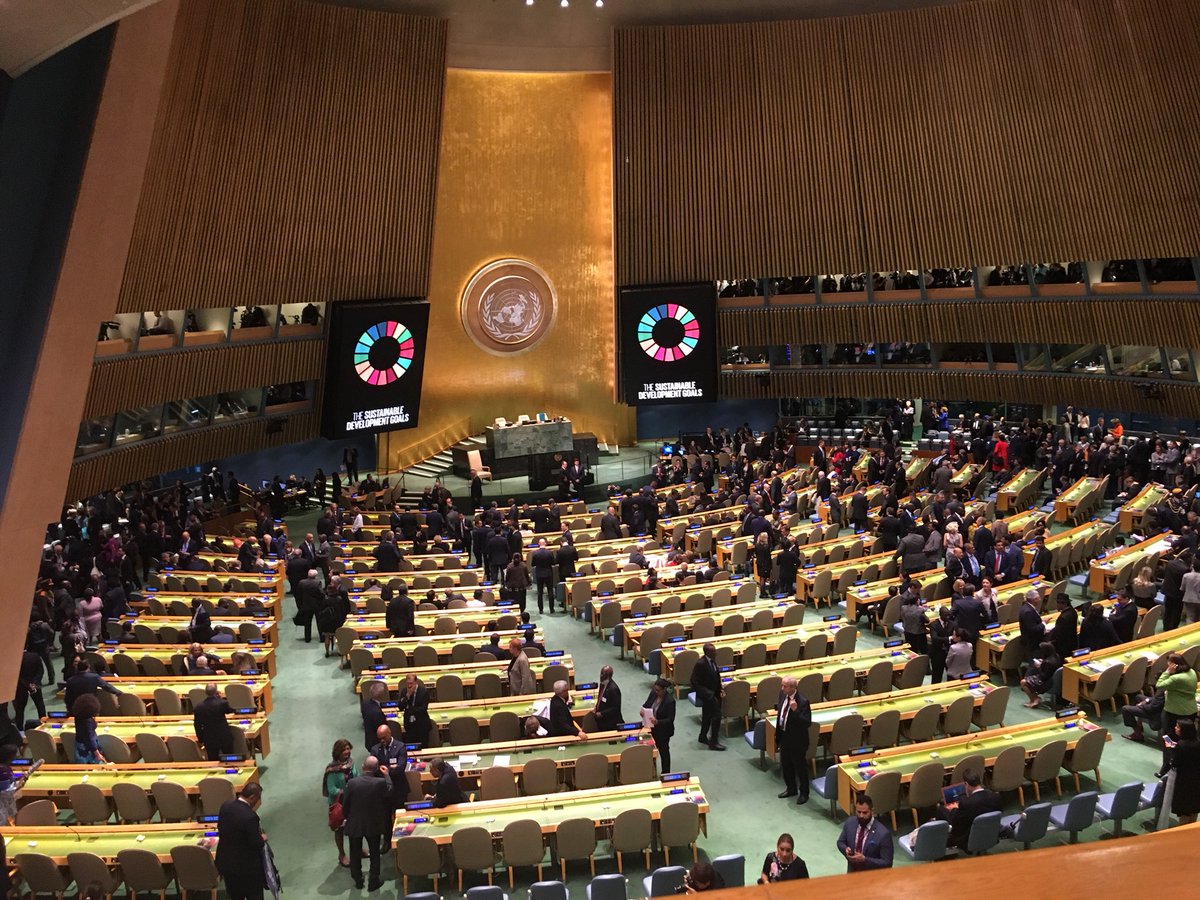 Diplomats mostly standing and walking in the hall.

After a moment of silence for Kofi Annan, Guterres begins his speech on the theme of "trust deficit disorder."

"Within countries, people are losing faith in the political establishment... Populism is on the march."

Guterres: "Universal values are being eroded. Democratic values are under siege."

"Multilateralism is under fire precisely when we need it most," he said.

Guterres added that "we are moving toward a multipolar world," but that won't necessarily solve problems.

After warning of burgeoning authoritarianism, Guterres said: "We need to move ahead based on facts not fear, on reason, not illusion."

"We must guarantee the implementation of the Paris agreement... but its targets, which represent the bare minimum... are far from being met."

"Welcome to the only place where a meeting of this kind is possible," Garces says.

Garcés speaks about violence against women, implementing the global compact on migration, and combating climate change and pollution.

She pivots to protection of people with disabilities, whom she calls the "planet's largest minority."

Garcés ends her speech with a tribute to Eleanor Roosevelt and the Universal Declaration of Human Rights. She recommends 15 minute speeches. Trump clocked in at three times the recommended floor time last year.  https://www.courthousenews.com/trump-un-bind-america-first-global-cooperation/ …

By tradition, Brazil is up first with president Michel Temer, who recently spoke of the graft charges against him to the Associated Press.  https://www.nwitimes.com/news/national/ap-interview-brazil-s-temer-denies-graft-defends-legacy/article_55f2d8b2-f4c2-5ca6-8243-94d12e51fc2d.html …

Temer talks about defending the "integrity of the order."

Temer bemoans a growing tide of "Isolationism, intolerance, and unilateralism."

"Isolation may even give one a false sense of security at first," he said. "Protectionism may even sound productive."

He talks about promoting dialogue and solidarity.

Temer is talking about a "large scale migration wave" in Latin America, particularly from Venezuela, where he notes more than 1 million have fled. He speaks of welcoming these migrants.

Temer talks about being the first leader to sign a treaty to abolish nuclear weapons last year. More on that.

Brazil's Temer steps down. Trump is up next.

There may be a shakeup in the schedule. There is a ramp before the podium, because Ecuadorean President Lenin Moreno - who uses a wheelchair - is now in the number two speaking spot.

Moreno waxes philosophical for his first line: "Everything in life is cause and effect, and every effect implies a cause."

Moreno's florid speech is less a list of global challenges, international crises and issues than it is an ode to the imagination. "Someone asked me once what gave rise to this thinking? Perhaps I was born and grew up in the Amazon region. The lungs of the planet," he says.

Turning to a specific issue, Moreno criticizes the pharmaceutical industry's effect on global health in pursuit of profit.

"From this wheelchair, I see from the eyes of the heart," he adds later.

Reminder: Earlier this morning, the President of the General Assembly, Ecuadorean diplomat Garcés, spoke about her goal of protecting the rights of people with disabilities.

Note: I covered #UNGA last year, and this is an uncommonly poetic, personal and passionate speech, filled more with first-person reflections and philosophizing than the issues on the head of state's agenda.

Moreno slams how "this country" - the United States - continues its "blockade of ... an almost defenseless country," Cuba, in light of its principles of life, liberty and the pursuit of happiness.

After quoting Thomas Jefferson on the Declaration of Independence, Moreno invokes Jose Martí on migration from Venezuela.

Moreno finishes his speech. Is Trump here yet? We’ll see.

Trump steps to the podium, and his speech begins.

"One year ago, I spoke before you in this auditorium for the first time," Trump says, boasting about allegedly accomplishing more in two years than almost any administration.

"I wasn't expecting that reaction," Trump adds, referring to the laughter.

Lashing out at "global governance," Trump talks about respect for U.S. "national sovereignty," before pivoting to his meeting with Kim Jong Un.

"I'd like to thank Chairman Kim for his courage and the steps he has taken," Trump says.

"I am pleased to report that the bloodthirsty killers known as ISIS have been driven out of Iraq and Syria," Trump says, denouncing what he calls "radical Islamic terrorism."

Pivots to Syrian civil war and then lays into Iran.

"The Iran deal was a windfall for Iran's leaders," Trump says, lashing out at agreement.

Trump talks about reimposing sanctions in November and promises "more will follow."

Then, he pivots to trade, where he says U.S. is "systematically renegotiating broken and bad trade deals."

Trump rips into the Human Rights Council and the International Criminal Court.

"As far as America is concerned," Trump says, the ICC has "no jurisdiction" and "no authority."

"We will never surrender American sovereignty to an unelected, unaccountable bureaucracy," he added.

As every other country and diplomat talks about climate change, Trump trumpet's so-called "clean coal" and claims America is getting ripped off by other countries on oil.

“Above all, we love our country,” he says.

He talks about the “heart of a patriot” inside people of every nation.

“Together, let us choose a future of patriotism and pride,” Trump continues.

“Thank you, God bless you and god bless the nations of the world,” Trump concludes.

Applause. Trump steps down from the dais.

Experiment with dramatic shifts in tone:

Then report the whiplash of that experience back to me.

The hall largely empties of press and diplomats. The Trump show is over and the Erdogan show is scheduled to begin.

Erdogan steps to the dais and begins his speech.

“We are holding this meeting on the 100th anniversary of the end of the first World War,” he says, speaking of the UN’s genesis from WWII.

“Even if the entire world turns its back, Erdogan says, Turkey will support the side of the “oppressed Palestinians.”

“When we say the ‘world is greater than five,’” Erdogan says that Turkey is becoming the “conscience of the entire human race.”

Erdogan, who has been trailed by a corruption scandal linked to tens of millions in bribes to his top ministers, blasts income inequality and the power of the wealthiest 62 people in the world.

Turkey took in 4 million refugees, he continues, in a portion of the speech on Syrian refugees and humanitarian aid.

Erdogan cites Alliance of Civilizations as an example of country’s humanitarian. The organization was accused of muzzling a press event at the UN.

Pivots to portion of his speech on the July 2016 coup attempt, blaming it on what he calls FETO, Turkey’s acronym for Fethullahist Terrorist Organization.

Erdogan demands extradition of Gulenists, says price for not doing so will be “quite hefty.”

Erdogan's speech ended some time ago.

Service advisory: Left the #UNGA hall, and I'm working on an update to this developing story.