Here’s a story of popular rage, out-of-touch elites and fake news. It’s not snatched from the headlines however - it occurred in southern Germany, in the Year of Our Lord 1476. It concerns a young man by the name of Hans Boehm, his drum and the trouble they caused. THREAD /1 One thing you need to understand about Germany in the century prior to Martin Luther is that a reformation - not just a spiritual one, but a political and social one, was well underway. The old certainties of the feudal order and the rule of the Church were teetering. /2 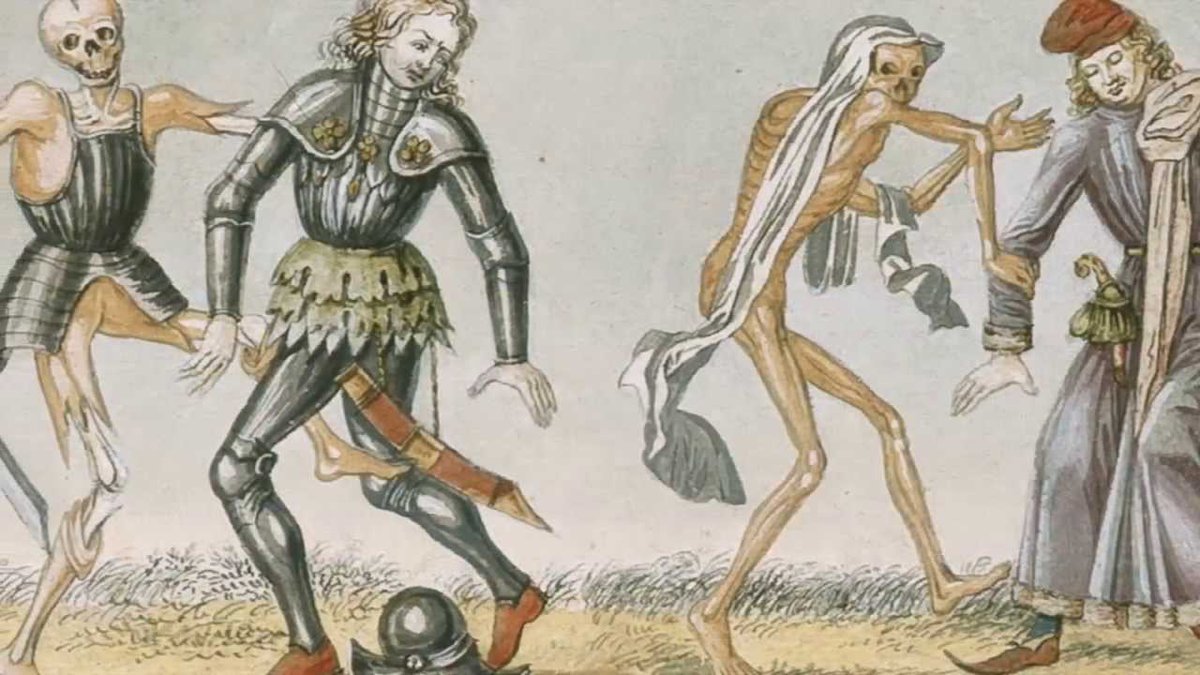 An increasingly literate population, a shift in the value of labour due to the Black Death and the invention of the printing press meant that more questions - for good or ill, were being asked than ever before. The air fairly crackled with urgent whispers and queries. /3 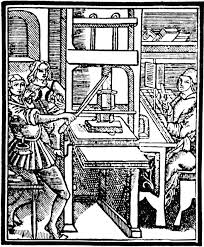 Another thing you need to understand is that this was also a time when superstition & zealous belief still ruled supreme. The saints played a huge role in the lives of everyone. Shrines dotted the countryside. The world was a dark place, with only God’s light to protect. /4 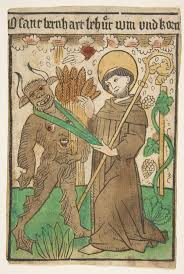 All of the stories about Hans Boehm have this in common - he was a young shepherd, who spent his time with his flock in the pastures around Niklashausen, in the Franconian region of Germany - not far from Wuerzburg. When not on the job, he played the drum and flute in taverns. /5 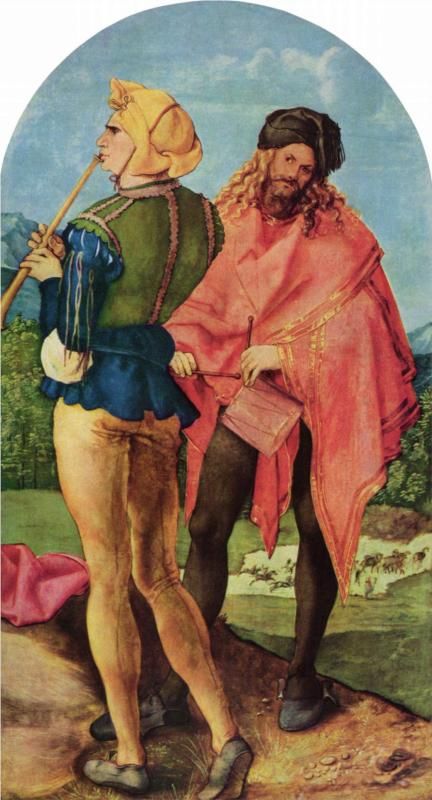 One night, the accounts go, while tending his flock, it’s said that the Virgin Mary appeared to him. She told him, that God was angry at the Church and the Princes of the Land, and that there needed to be an awakening of the people, to take back what belonged to *everyone*. /6

Heeding the Virgin Mary’s warning, Boehm went home and burned his drum. He then went to Niklashausen to preach, imparting the Virgin’s message to anybody who would listen - the land belonged to all, reject your trinkets, follow a life of simplicity & stand against the princes! /7 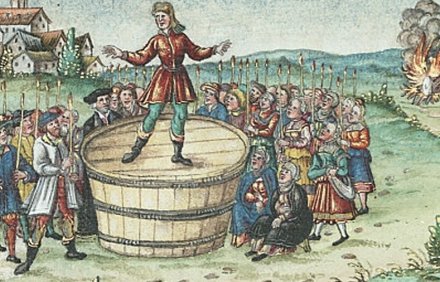 Now it’s at this point that accounts differ. Some say Boehm had this experience all on his own, others suggest that he was ‘coached’ by a Beghard priest - a kind of radical hermit - who had his cell near Boehm’s flock. Some accounts would later paint him as a sinister adviser. /8 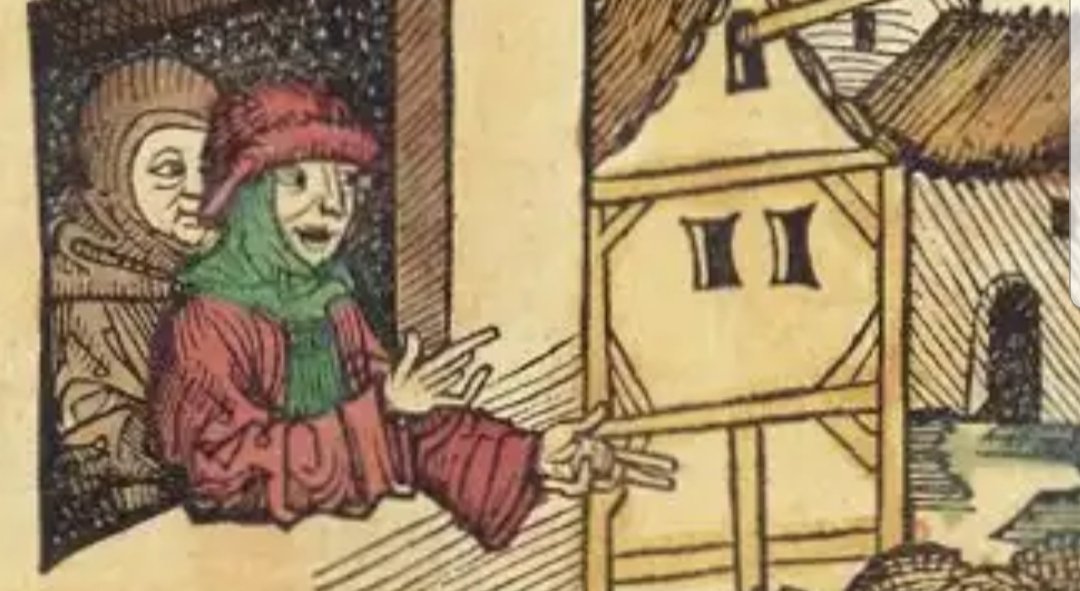 Whatever the case, Boehm’s preaching attracted attention. Soon, around 70,000 pilgrims gathered around Niklashausen to listen. Great crowds of people, singing hymns & hearing a message that they should turn against the princes and the Church, & make the world equal once more! /9 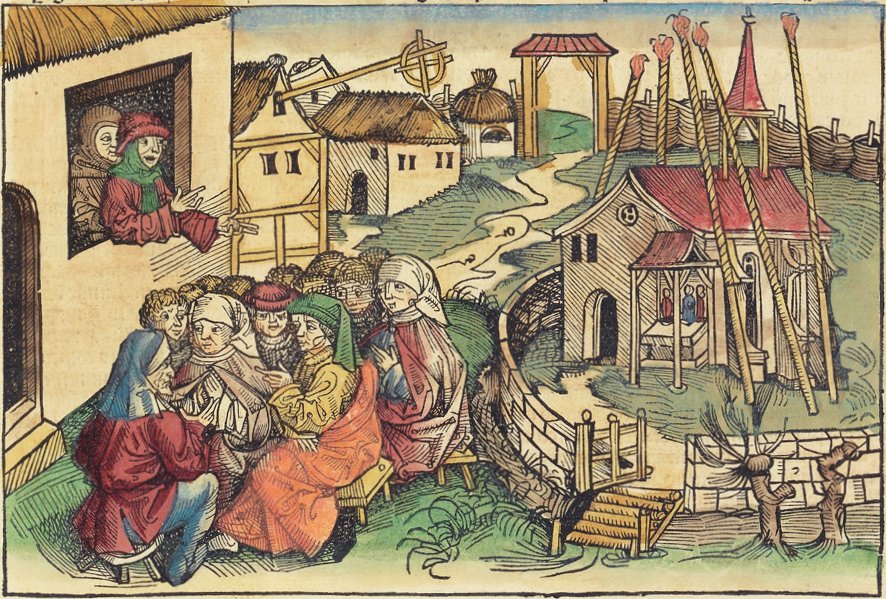 Of course, this was bound to attract attention. The Bishop of Wurzburg sent spies who listened to the discussions in the crowds. We don’t have context for what was said, but it was clear that there was real anger and resentment towards the early Princes and a corrupt Church. /10 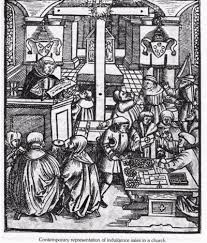 From accounts, we also know that the pilgrims were burning their own possessions in what was known as a ‘bonfire of the vanities’. It was clear that these people felt that, stripped of their worldly possessions, they had nothing to lose and everything to gain. /11

This prompted the Bishop of Wuerzburg into action. Once night, twenty odd knights appeared at the lodgings where Boehm was staying and arrested him. Those who resisted the knights were arrested too, and all were taken to the Marienburg Fortress. /12

At the Marienburg Fortress, Boehm & his compatriots were tortured - not only to gain a confession, but to have them recant everything that they had preached. The movement had to be broken there and then. Boehm was suspended on a rope, then dropped repeatedly, smashing bones. /13 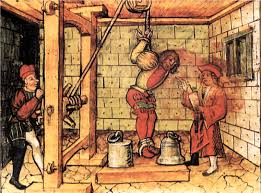 Outside, the pilgrims had marched from Niklashausen to rescue their prophet. The crowd grew so large that the cannons were fired first over their heads, then into the crowd, to disperse them. When the smoke cleared, the crowds had begun fleeing. The spell was broken.  /14 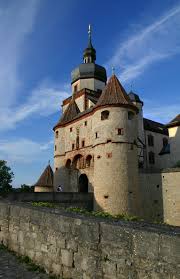 In July 1476, Boehm along with two others - one, perhaps, the Beghard priest - were executed at the Marienburg Fortress. The other two were beheaded - he was burned alive. /15 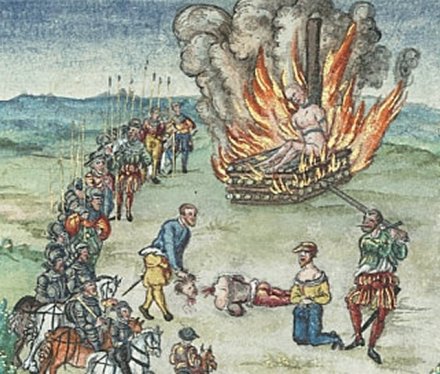 Despite Boehm’s death, it took a while for the stories about him to subside. In fact, the Bishop ordered the church at Niklashausen to be destroyed IN 1477, as over a decade after Boehm was executed, it was still serving as a place of pilgrimage. (They rebuilt it later). /16

In fact, the stories about Boehm lasted for decades. Slowly, over time, they moved from praising him, to posing him as an idiot, a patsy, the tool of radicals - most probably under the influence of the authorities. /17 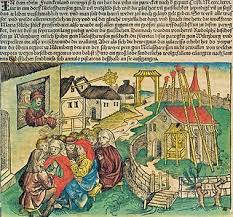 So where’s the truth? We’ll never know. People of the late middle ages had no problem believing in religious experiences, and report many. I have no doubt that what Boehm claimed, he genuinely thought happened to him. /18

However, I also believe that he was *also* the tool of others - radical priests, farmers who saw the inequity of their lot, opportunists and scoundrels. Heck, I think maybe even the clergy of Niklashausen may have encouraged him - pilgrims mean a hefty income stream. /19

All of these frustrations and anger would erupt spectacularly in the fifty years after Boehm’s death - first in the ‘Poor Konrad’ rebellion of 1515, then the German Peasant’s War of 1525, which practically set Southern Germany on fire until it was brutally quashed. /20 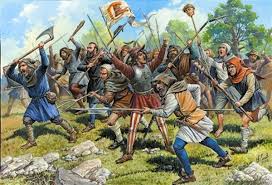 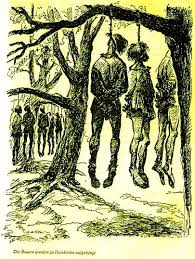 I see a lot of the present in the story of Hans Boehm & his drum - a powerless population with a fervour for change. Sudden outbreaks of religious zealotry. Nervous authorities coming down hard to prevent rebellion. Stories being warped & changed to suit a ruling narrative. /21 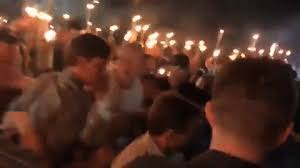 If you want to learn more about Hans Boehm, may I commend @executedtoday, who has a terrific article about him, with links. /22  http://www.executedtoday.com/2014/07/19/1476-hans-bohm-the-drummer-of-niklashausen/ …

This is why I study history - to try to understand what’s happening around me. Truly, there’s nothing new in the hearts of men, only the technologies, the structures, the terms we use change. Funnily enough, I find comfort in seeing the patterns, even if they end grimly. /23

Germany during the 15th and 16th centuries - hell, Europe - is a great period to study if you want to understand what might be happening now. Not for the same structures, and players per se - of course not - but the overarching themes and emotions driving the turbulence. /24

Thanks for listening. I’m trying to make these stories a regular, sustainable thing. If you like what I do, you can tip me at  http://ko-fi.com/mikestuchbery  I’m also open to any writing gigs that you may have - let me tell stories for you! :) /FIN