In honour of the @KhmWien opening their exhibition devoted to Pieter Breugel the Elder, I thought I’d do a thread on the bloke and some of his greatest works. Basically, he’s my favourite painter - always has been. Here’s why… THREAD /1 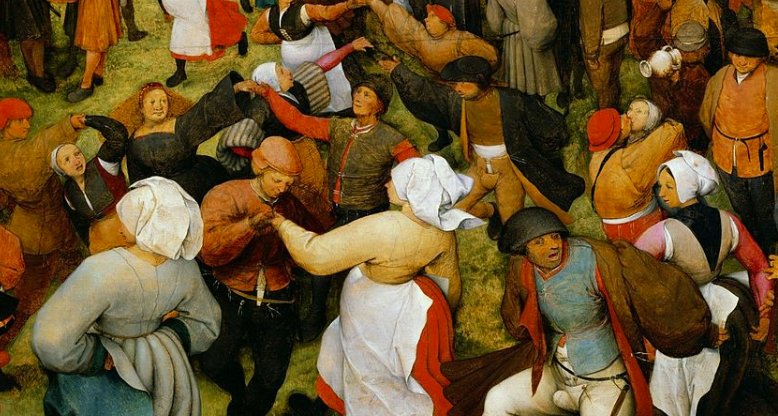 Note: All paintings in this thread come from @WikiCommons, unless stated. /1a

Biographical details for Breugel are sketchy, though we know that he was born in the Netherlands, in or around the town of Breda, some time *after* 1525. He was apprenticed to the workshop of a painter called van Aelst & spent his training working on altars and paintings. /2 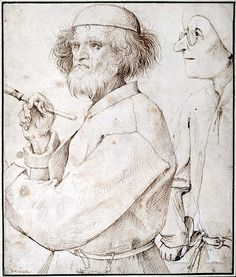 After a trip around Italy - the powerhouse of painting at the time, Breugel ended up in Antwerp as a member of the painter’s guild. This is where he began producing some of his most well-known works, from around 1557. /3

It’s worth interjecting here to point out that this was a time of incredible change and growth across Europe. The Protestant Reformation was well under way and humanism was also still ascendant. There was lively debate on man’s nature, especially in centres like Antwerp. /4

While he might not have been a philosopher or theologian, unlike several notable figures that he would have known, he had a tremendous gift for exploring the human psyche through paintings that presented a vast scene, crammed with detail and often including pastoral figures. /5

A painting that embodies this particular gift is ‘Netherlandish Proverbs’ circa 1559, now held in Berlin’s Gemaeldegalerei. It includes visual references to over 100 common sayings in use in the Netherlands at the time. You can access a guide here. /6  http://projects.mcah.columbia.edu/bruegel2/ 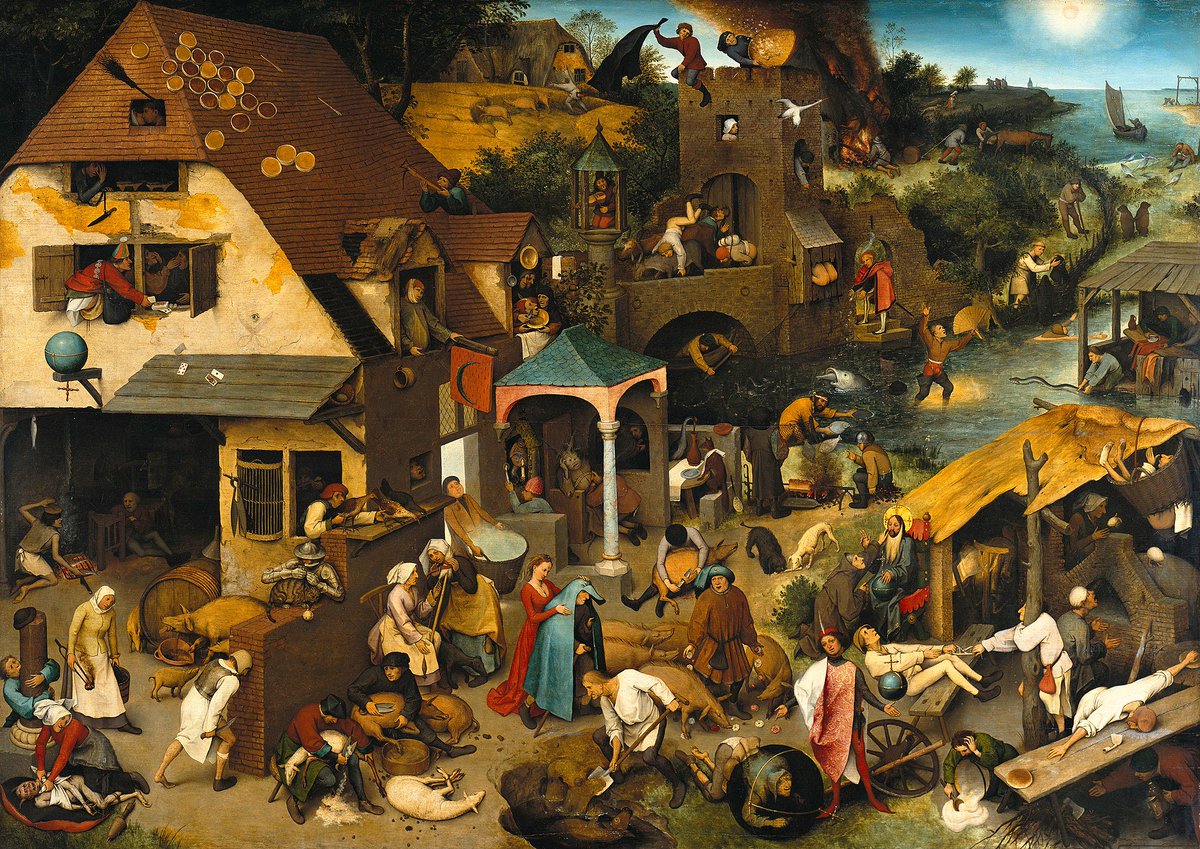 ‘The Wedding Dance’ c. 1566, held in @diadetroit, is a lot more intimate, but no less packed with detail. I love that you can almost smell the scene - woodsmoke, beer & sweat - and hear pipe & drum. It’s earthy & sensuous - an exploration of what is good amidst a hard life. /7 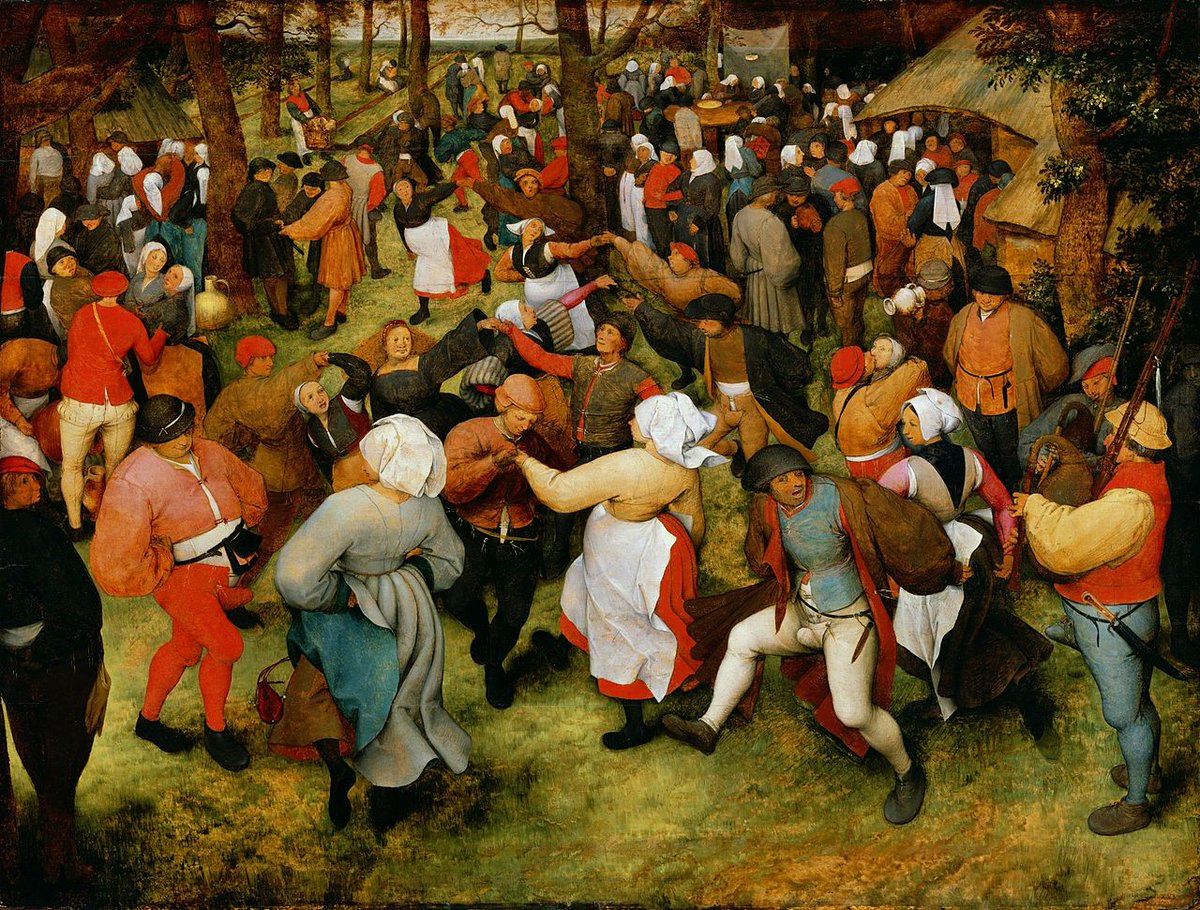 Look for the canoodlers off among the trees, the blokes having a beery chat, the women being whirled around by their partners. It’s a vibrant, thriving, throbbing scene. One meant to be celebrated. /8 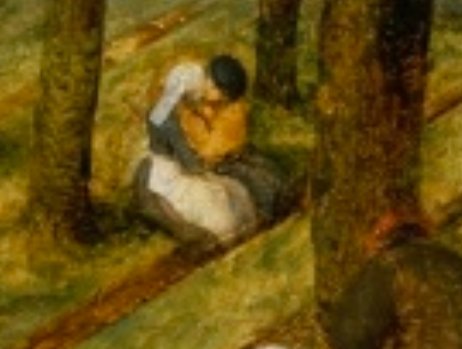 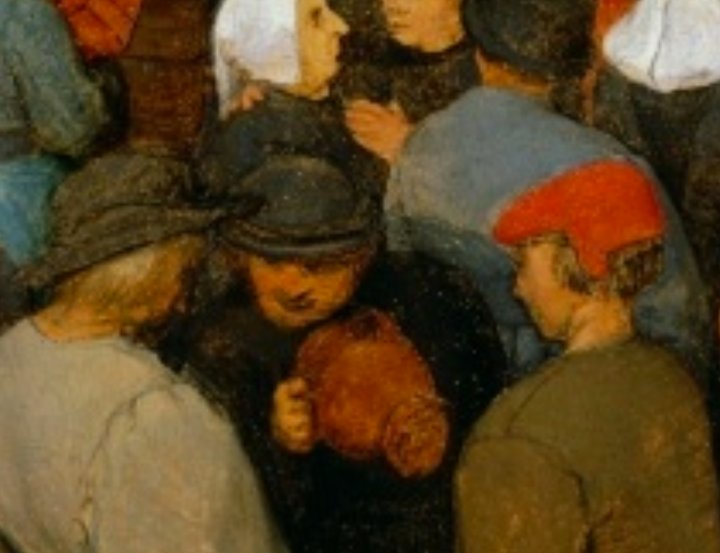 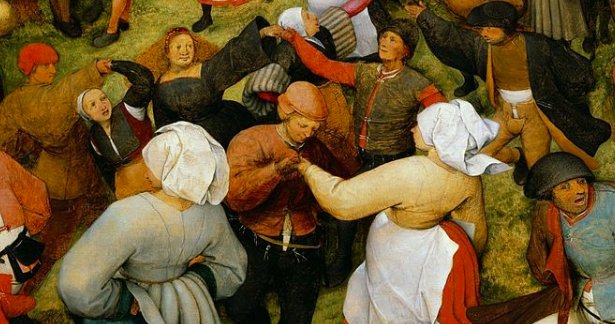 I love ‘The Fall of the Rebel Angels’ - c. 1562, held in @FineArtsBelgium - for very different reasons. Among grotesque demonic figures fighting with angels, in this Bible story I see a keen eye for the natural world. The unearthly made real, through a keen, studious eye. /9 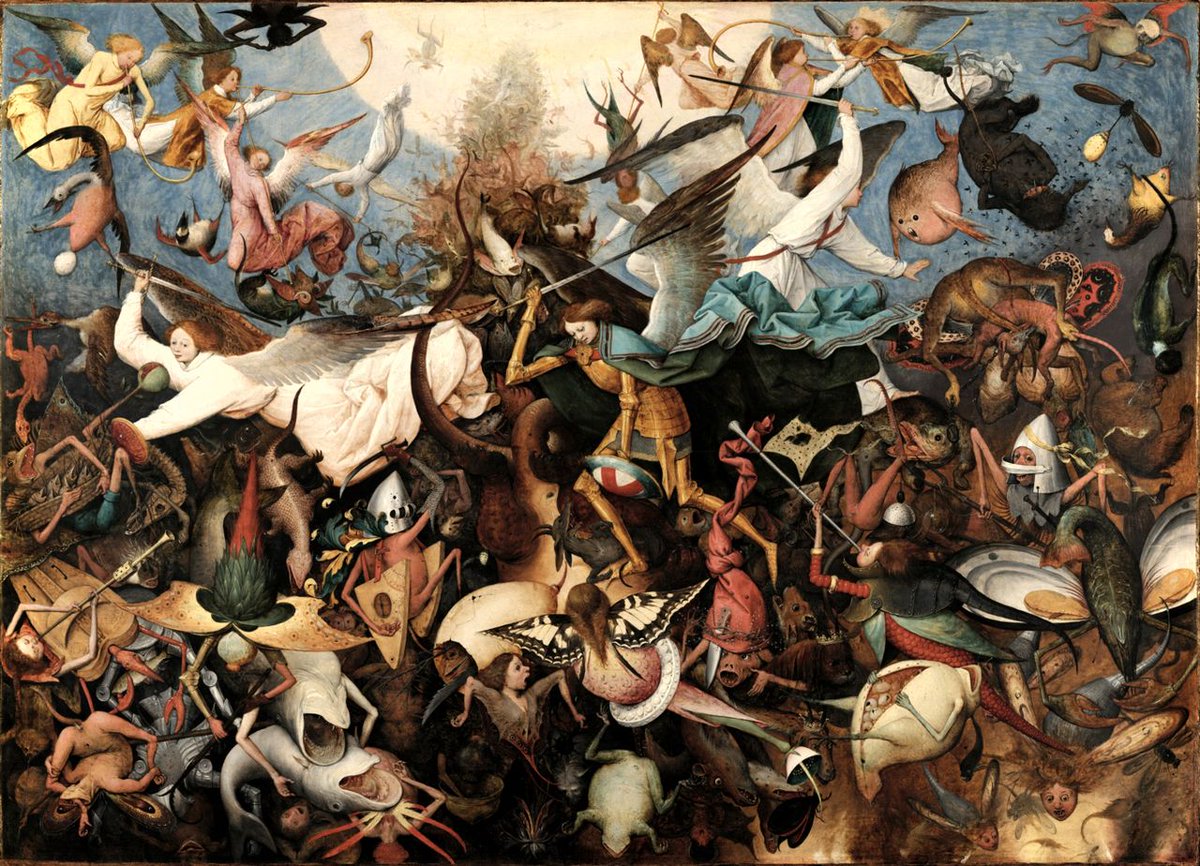 Here, keep an eye out for butterfly wings, insect thoraxes and gaping fish heads among the infernal combatants. It’s a clever way of rooting the scene in reality, whilst maintaining a level of revulsion for the forces of evil. /10 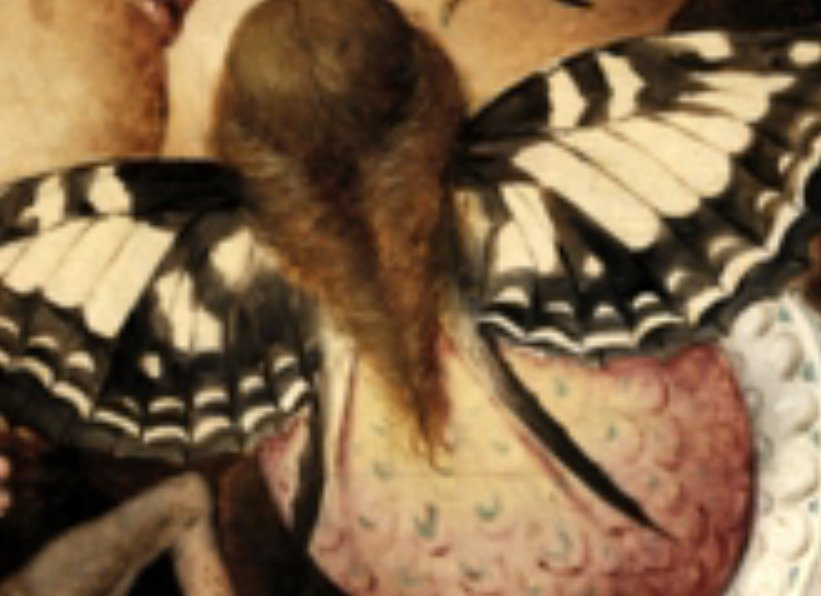 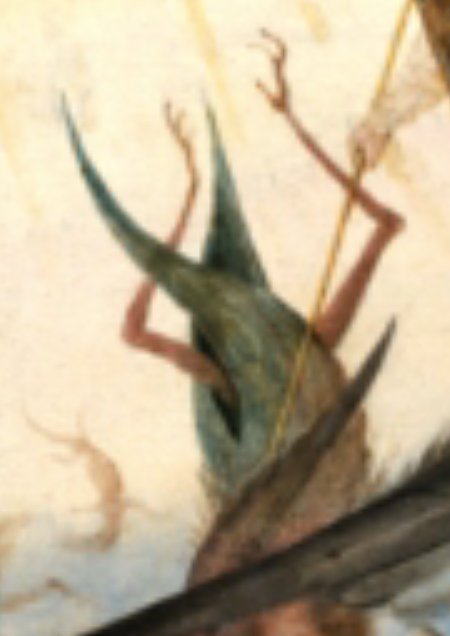 While ‘Dulle Griet’, or ‘Mad Meg’ - c. 1563 and held in @AMUZantwerpen - is supposed to be poking fun at loud women, I also find it a rather empowering piece for them. In this scene, the folkloric figure storms into Hell, raiding it and scaring out the devils. /11 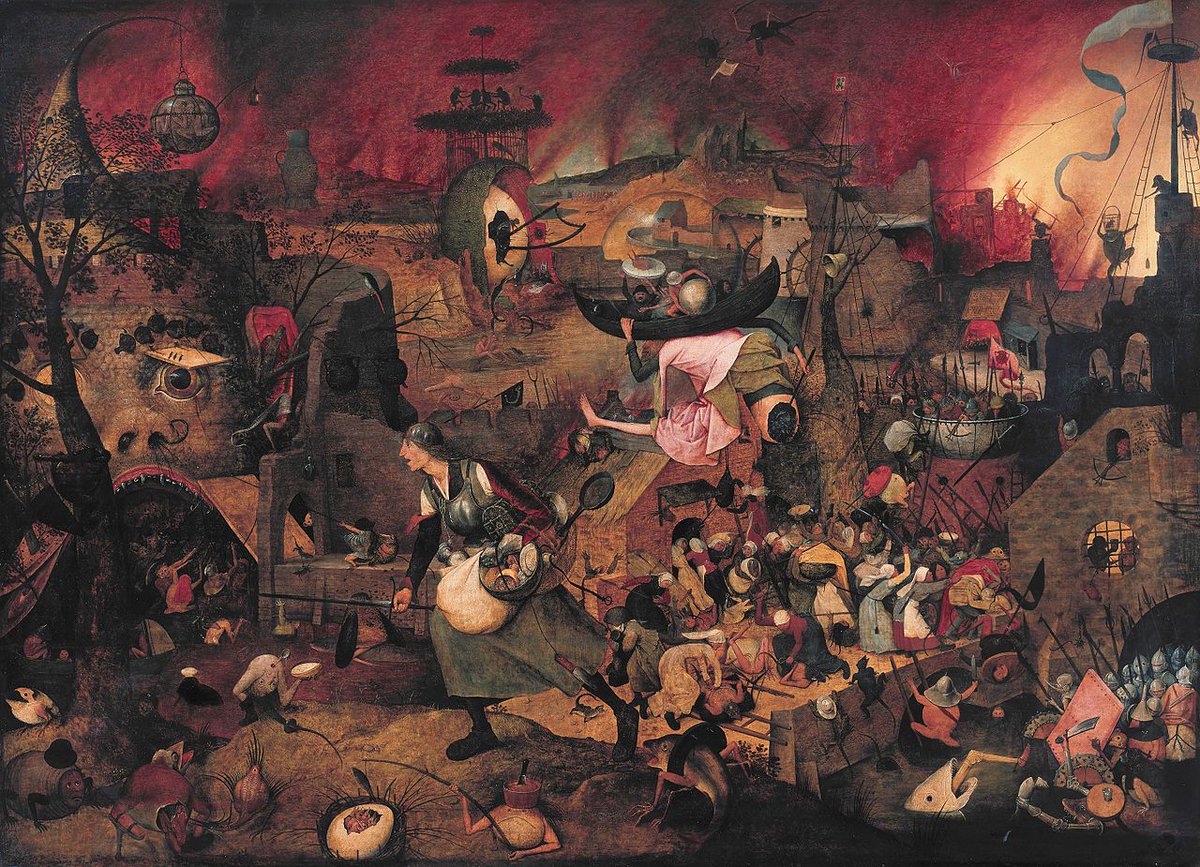 Look at the crowd of women, beating the devils back, while ‘Meg’, like a force of nature, rushes at the mouth of Hell, that seems almost terrified that she’s come to wreak havoc. It doesn’t feel a malicious work to me - more a wry acknowledgement of a woman’s fury. /12 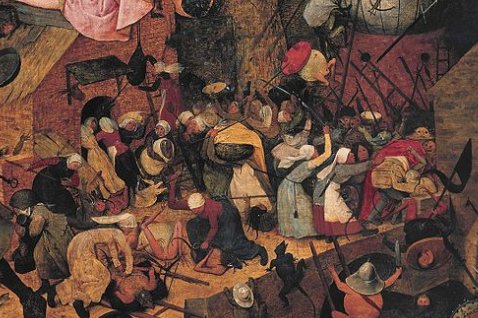 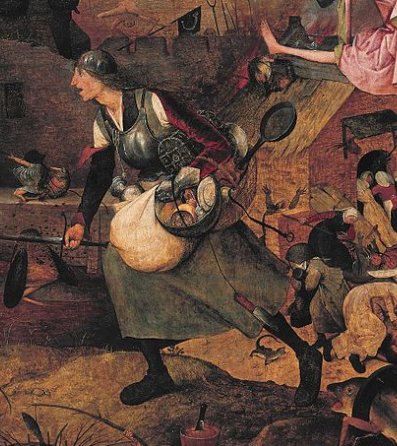 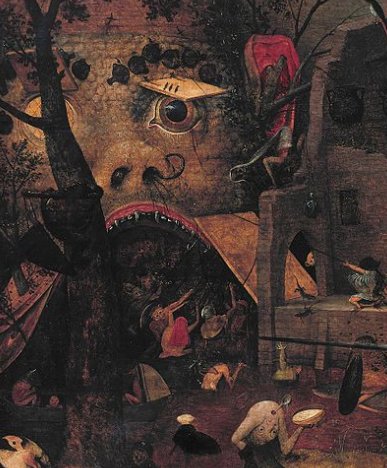 There are many more paintings that I could talk about, but I’d like to finish with ‘The Triumph of Death’, c. 1562, and held in the @museodelprado. Here we have what seems to be a rather over the top, macabre scene of the dead storming across a landscape. /13 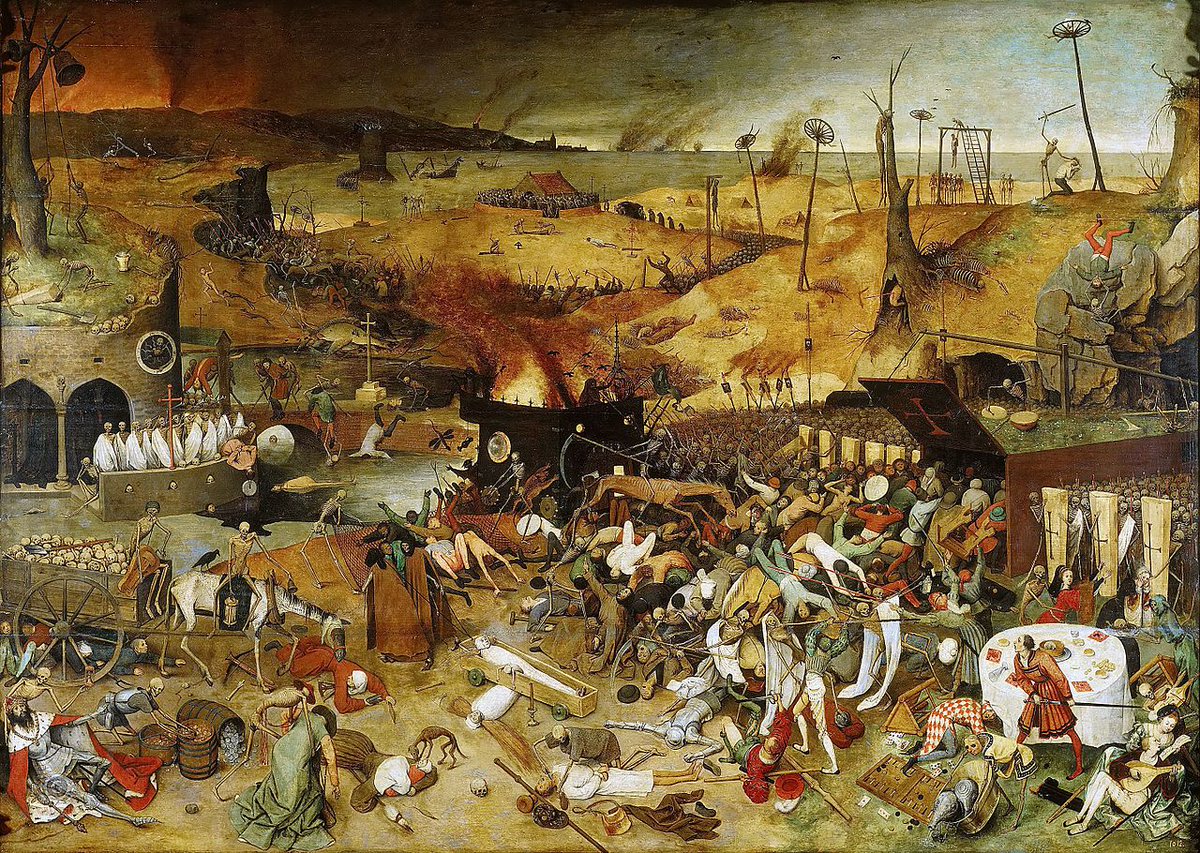 ‘The Triumph of Death’ represents the apex of Breugel’s imaginative, fantastic painting, but it also carries much that is very real and honest about it. It is loaded with the fears and anxieties of an age where the very ground under the feet of many seemed to be moving. /14

Within this painting, we see rich and poor alike being dragged away by the dead. We see corpses lying in the open, gnawed at by dogs. This strikes deep at the fear of being buried without making peace with God and 'dying well' - death is relentless and can strike at any time. /15 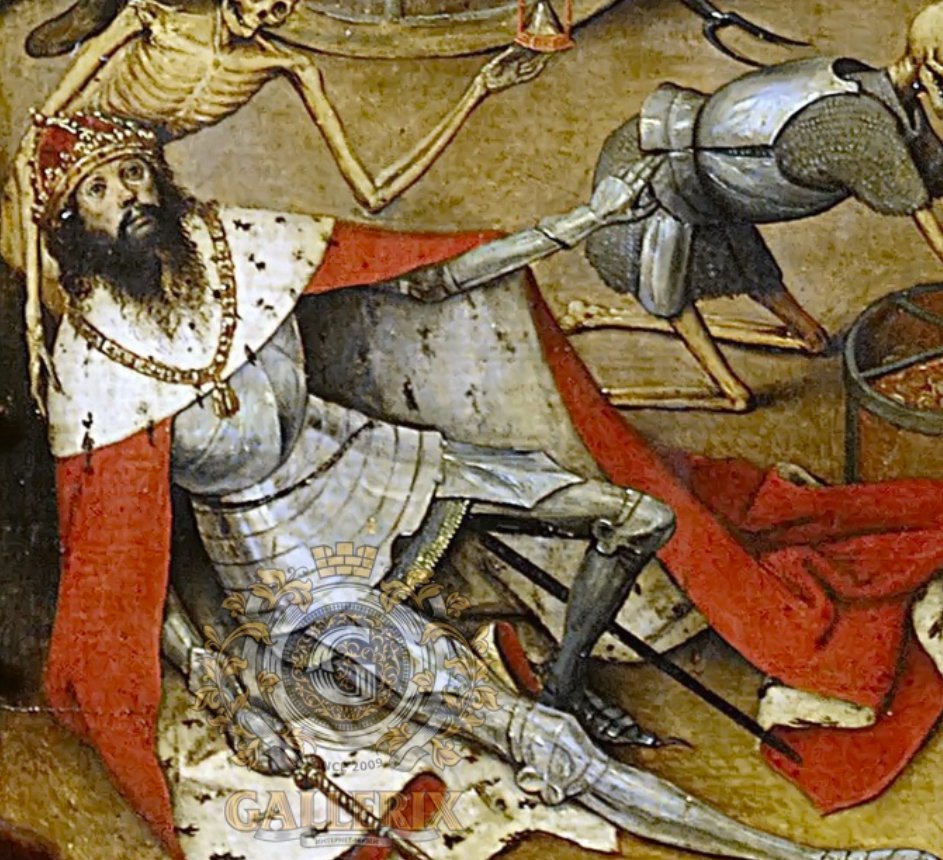 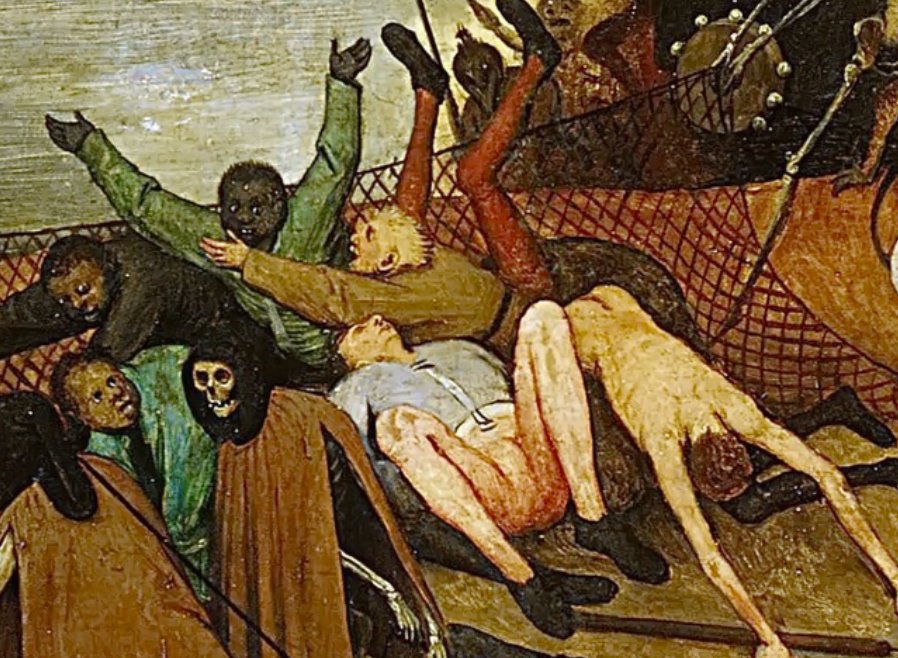 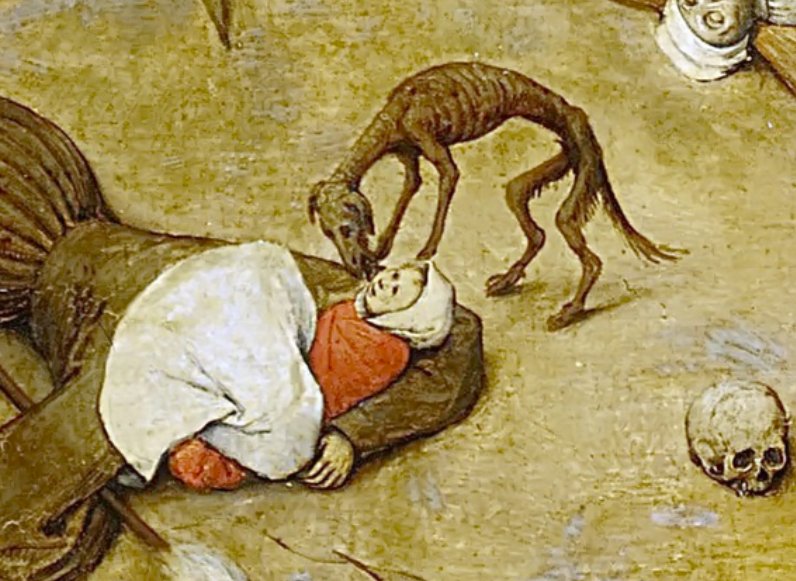 Elsewhere in the painting soldiers, dressed like German mercenaries or ‘landesknechts’, try to hold back an advancing army of skeletons. Bodies hang from gallows and buildings burn. This evokes the constant fear of war sweeping across the land. /16 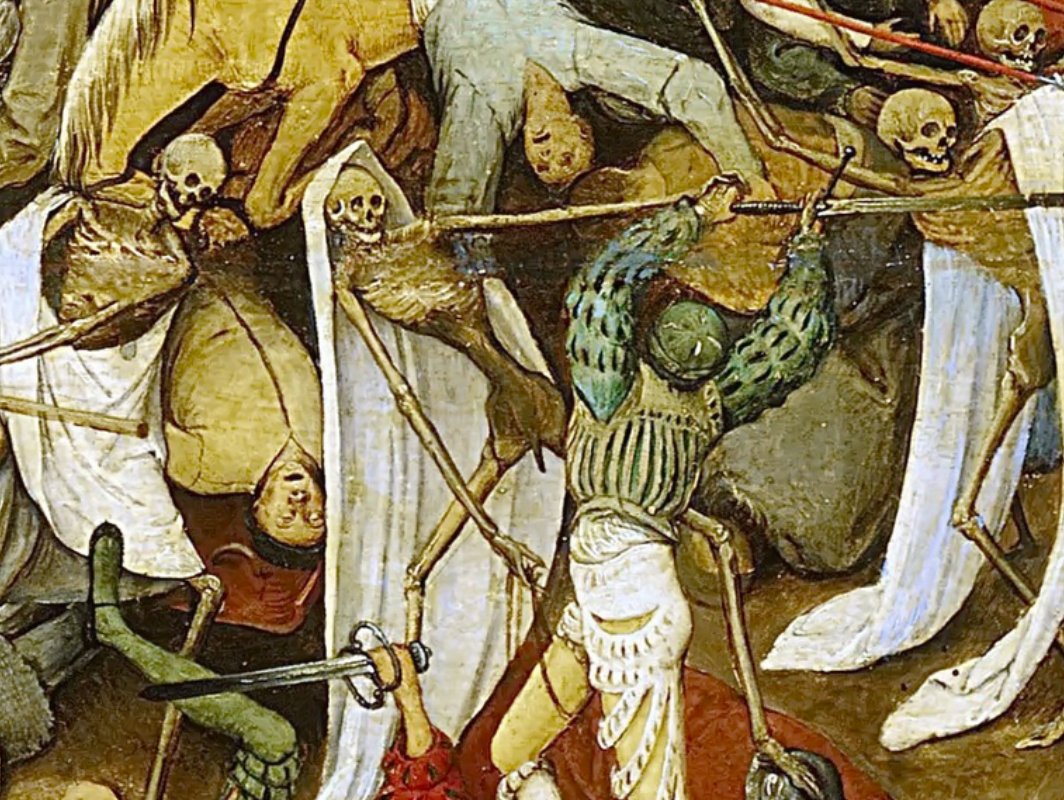 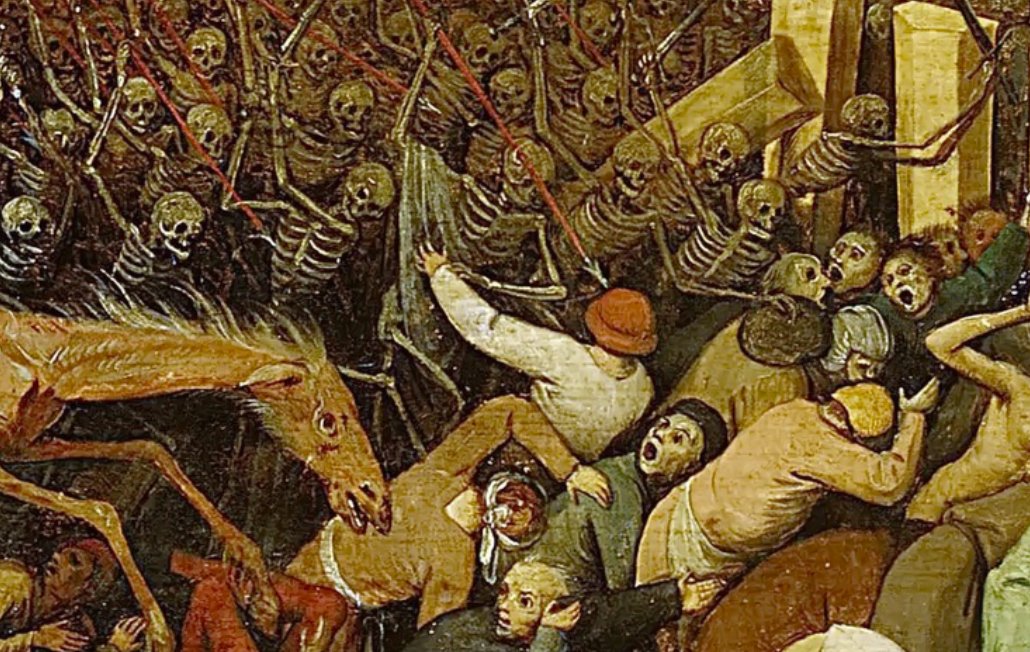 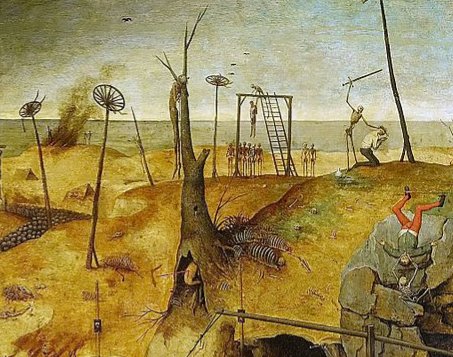 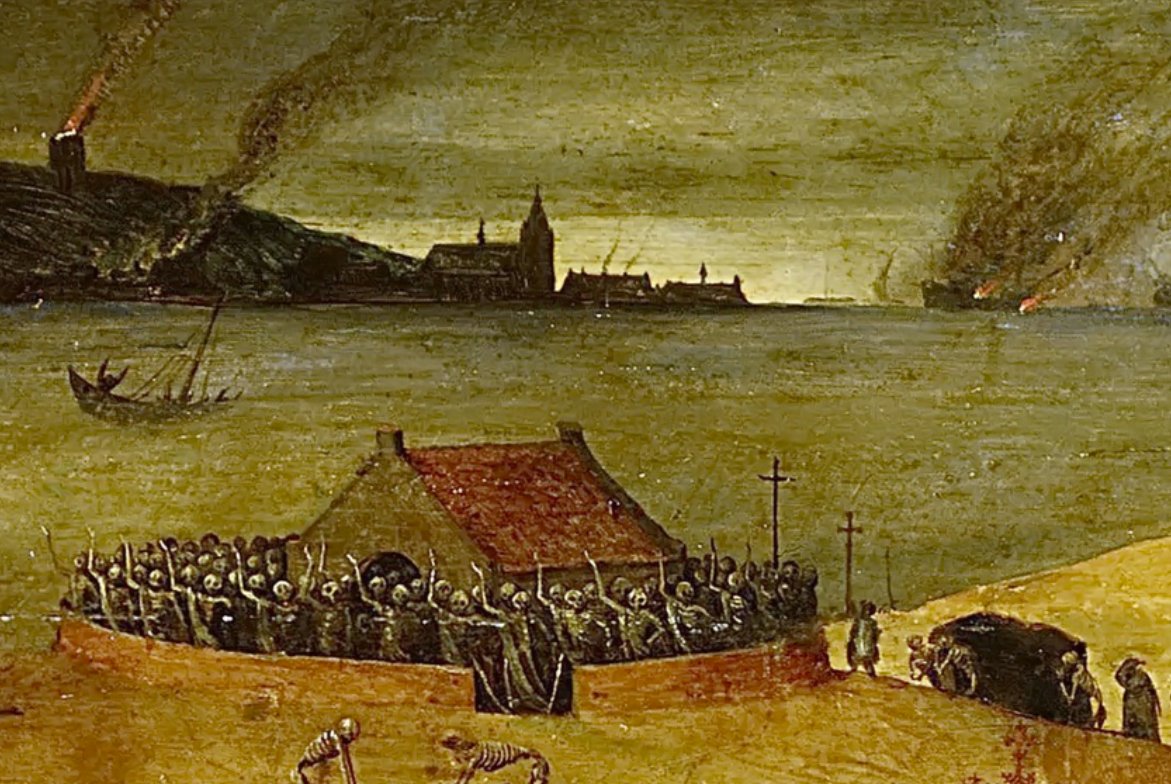 While the Low Countries never faced an onslaught from the living dead - at least, not one recorded - these are scenes that could come from any number of the religious & territorial conflicts of the age. Devastation & horror to us was a possibility to Breugel’s audience. /17

The Triumph of Death’ is a nightmare committed to canvas, and one that tells us much about what our ancestors feared as they entered the early modern age. It’s not an easy view, but it is one that speaks to us across the centuries. /18

Breugel only lived to around age 39. He died in 1569, leaving behind two sons that would go on to make their own careers, trying to capture a little of their father’s magic. They couldn't match Pieter Breugel the Elder’s detailed, vibrant ‘cinematic’ flair, however. /19

Breugel’s artwork is all about exploring what it means to be human. It takes us from lively, homely scenes, to disturbing vistas, populated by monsters. It is our desires & fears that he revels in, placing them in the frame of an allegory or religious fable to examine them. /20

For a simple overview with more information about Breugel’s works and the places you can see them in the Netherlands, I recommend this @VisitFlanders page. 21/  https://www.visitflanders.com/en/stories/arts-and-heritage/the-paintings-of-pieter-bruegel.jsp …