Alright, enough bad news! I feel like we're not getting sufficiently spooky enough, with Halloween fast approaching. Here then, is a glimpse at an eldritch tome of demonic abominations, so horrible that it comes with a warning to the reader... THREAD! /1

This cursed grimoire, this blaspheming text claims to originate from the distant past - 1057, to be precise. It is written in a mixture of Latin and German, suggesting that it originated from the dark, forsaken forests of the Holy Roman Empire. /2

To warn the ready of the horrors within, this book, this 'Compendium of Demonology and Magic' advises the reader, 'noli me tangere', or 'touch me not'. I advise all those with a nervous disposition to forgo reading the thread at this stage. Only terrors ensue. /3

The further we go in, we find the (Enochian?) signs and sigils of elemental (and other sorts of spirits). If you've read your Hellboy - and you should - you will probably recognize some. Truly, this is a work of forbidden knowledge. /4 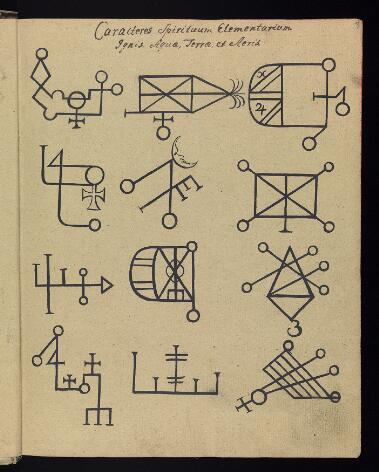 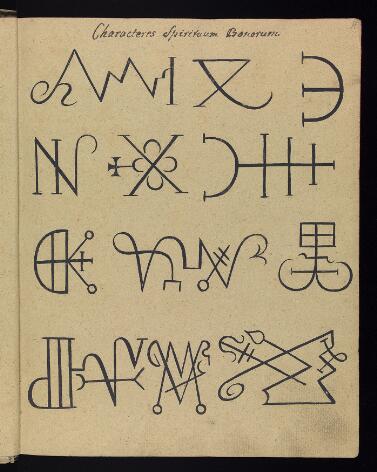 Here we find the tools one needs to summon baleful spirits from beyond the tattered veil. It looks like you'll need a censor, a skull, some appropriate grimoires, a skull and a sword. Oh, and a drawn magic circle - watch your Enochian grammar there, lest you summon Santa. /5 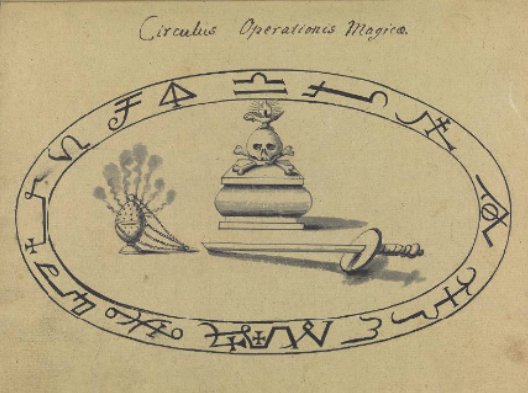 While the text is often too obscured - or too horrific for me to comprehend - the illustrations do much of the talking. Here we note that in order to perform fell rites, you need to be cool with nudity, bodysnatching and occasional demonic attack. /6 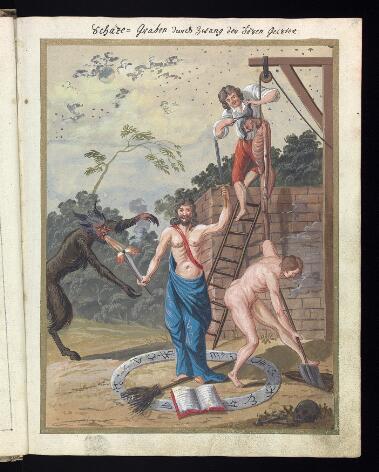 Much of this work is taken up with introductions to some of the hierarchy of the infernal realms. This absolute unit, this tubby boi, is Belzelbub, aka The Lord of the Flies. /7 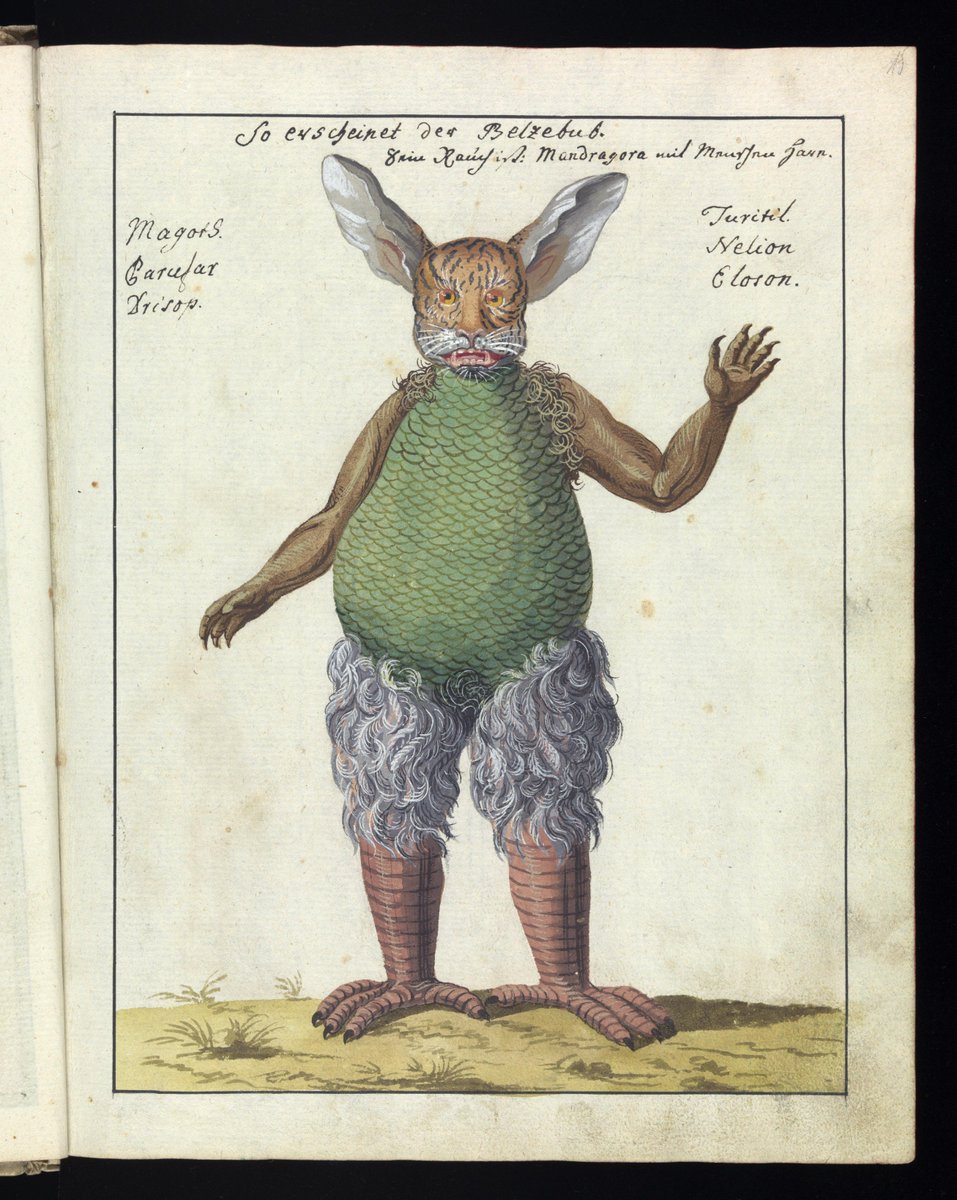 This beaky fellow is Asmodeus, lord of the spirits of the earth, banging his drum with a rather fetching top that incorporates skulls into the design. Notice he has his little demonic peenie out. This seems to be a motif throughout the text. /8 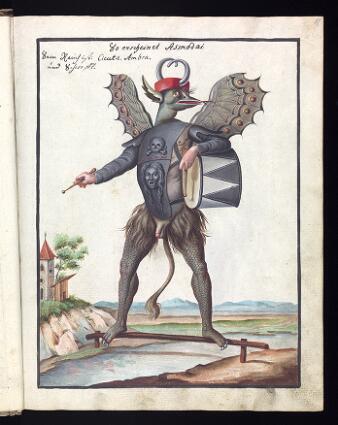 Dagon, lord of the inferno, gets his own, black-edged page. Look at him there, bathing in the flames, enjoying a tasty mixed grill. What a life, hey? I can see why some would have wanted to contact him - who doesn't like a leg-and-arm skewer? /9 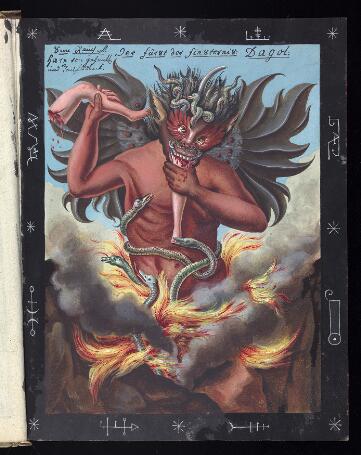 Much of the rest of the text seems to be devoted to showing magickal practioners at their art. We see a sorceress, some sort of cleric at work in a graveyard, and a man performing a rite under the gallows. Seems there's more than one way to contact the hell-realms! /10 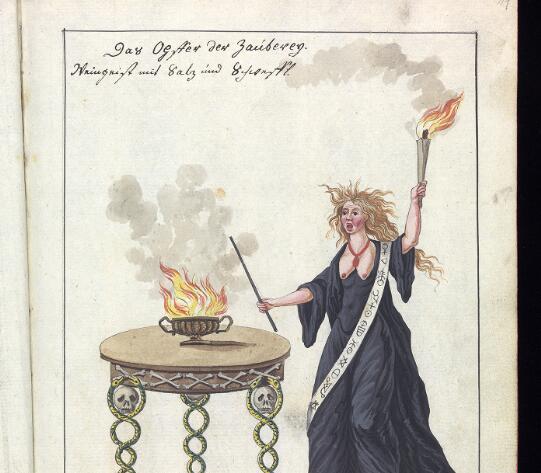 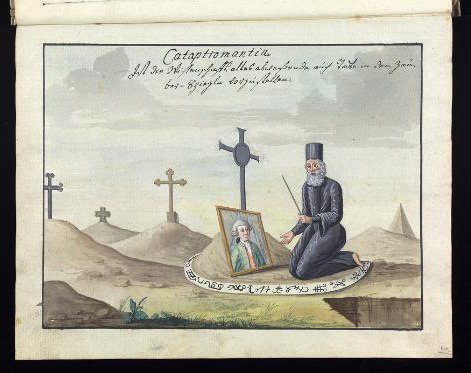 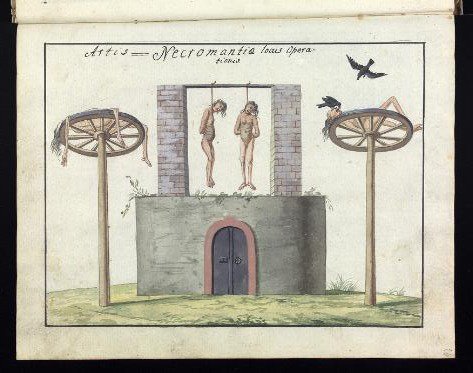 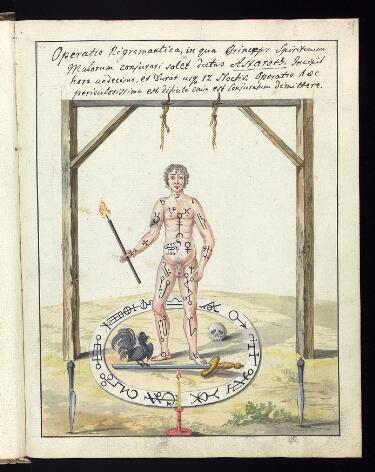 Is this really a magical text from 1057? Of course not. It dates from the 18th century, and was probably back-dated to give it some sort of credibility in the eyes of potential buyers. Those in possessions of the book - @explorewellcome - suggest it was made around 1775. /11

Despite the modernizing forces of the Enlightenment, there was a rich esoteric and occult tradition in Germany that dated back centuries, at least to the Renaissance. Remember, this is the land that gave us the story of Faust (based on a real personage, most probably). /12 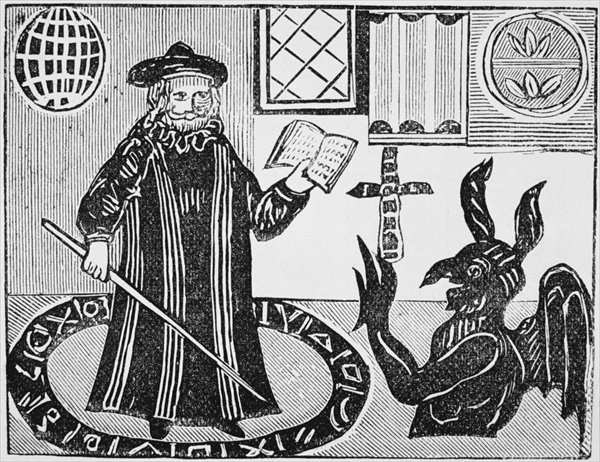 The Rosicrucians also popularized the occult in Germany. A bit of a undergraduate lark established by a southern German theologian, it got out of hand & soon gentlemen all over were dabbling in the mystical arts. Good @Skeptoid about it. /13  https://skeptoid.com/episodes/4164 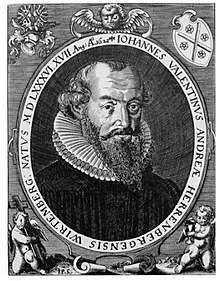 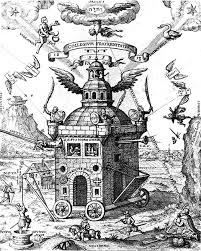 Just as an aside, there was a huge double-standard at play in the 17th and 18th centuries. Rich men could go dabble in the 'dark arts' as much as they liked. Women who performed apotropaic ('to ward off evil') rituals often found themselves hanged or burned. /14 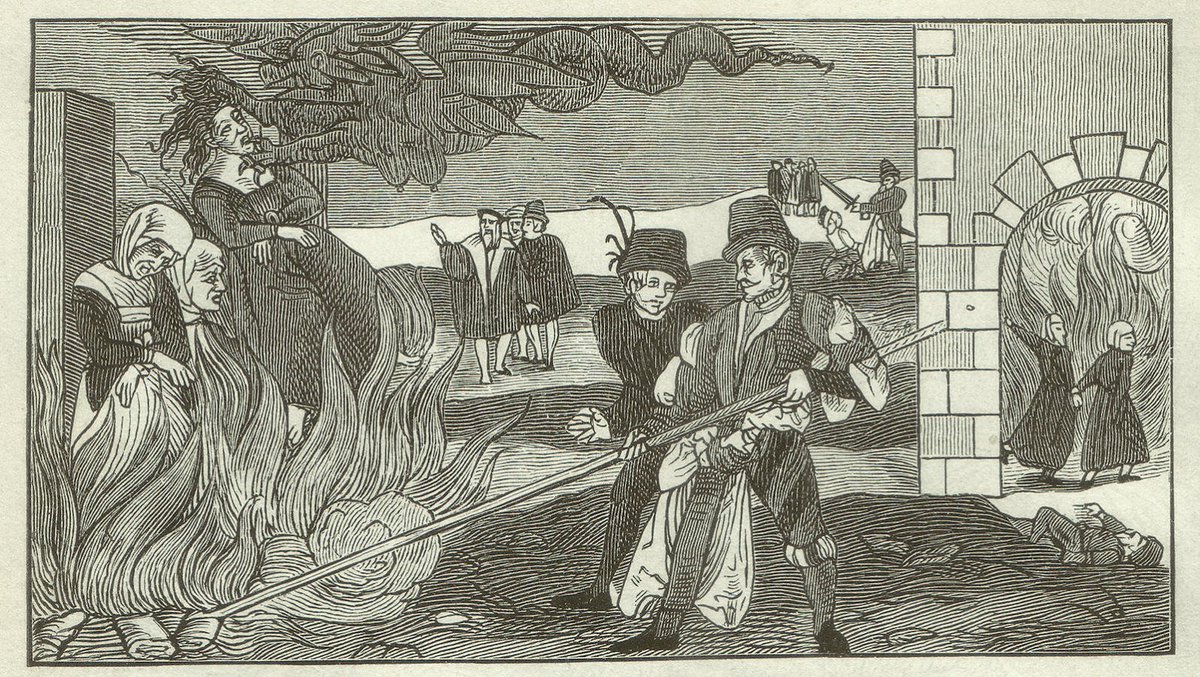 By the time that our book was created, figures like Count Alessandro di Cagliostro and Conrad Dippel were known for their alchemical experiments and attempts at magical rites. They would later be remembered by the writers of the Romantic movement. /15 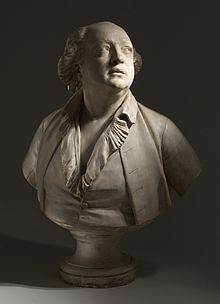 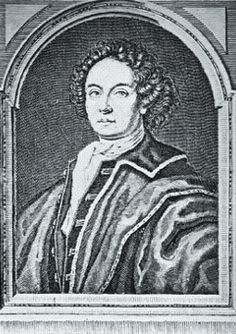 So what *is* this book, really? I believe that on one level, it was meant to entice a rich buyer or patron who might want to join the craze, so to speak, and dabble in the occult. On the other, I think it's an artifact showing the desires and fears of 18th century Europeans. /16

The 'Compendium' really is a treasure. It's something to sit with, read and let your imagination soar. It's obvious that a great deal of love, care and attention went into its creation, no matter how ghastly or strange the contents might seem to us. /17

So, I hope that you enjoyed that brief dive into a most strange and wonderful text. There's so much more I could say about it, but I think I'll leave that for later - look for a longform piece in the future! /FIN

PS. @ExploreWellcome, can I come in and touch it? Just a little?