Here's something suitably gross and historical to ease you into your day - be warned though, it is really pretty gruesome. It's a case of new evidence coming to light that supports a theory that archaeologists held. THREAD /1

We all grew up learning about Pompeii - possibly the best-preserved Roman town in the world, thanks to the tonnes of ash and pumice that buried it in 79CE, as Mt Vesuvius erupted. Not so well known is the nearby town of Herculaneum. /2 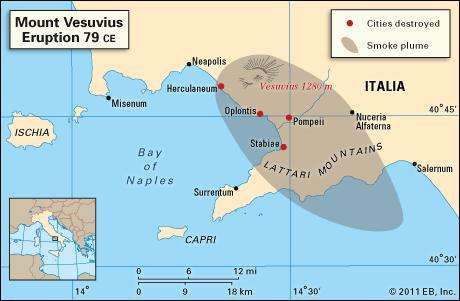 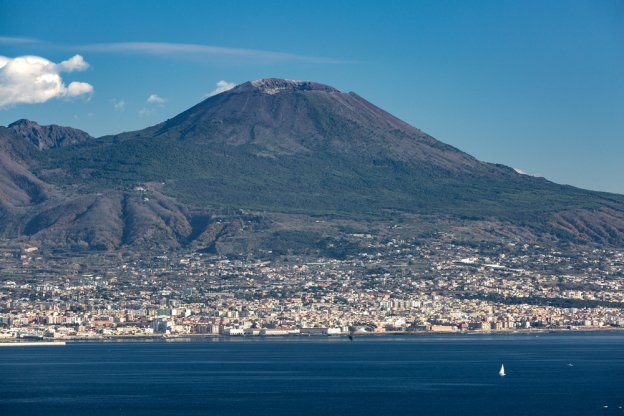 While Pompeii got the ash and pumice, the inhabitants of Herculaneum had a torrent of boiling mud to deal with, along with a turbo-charged pyroclastic flow of super-heated gases and tephra - almost like floaty asbestos. /3

Herculaneum was where you lived if you had a bit more money than those plebs over in Pompeii - more upmarket and self-contained, with a number of villas and, importantly, boat sheds for fishing boats and private craft. /4 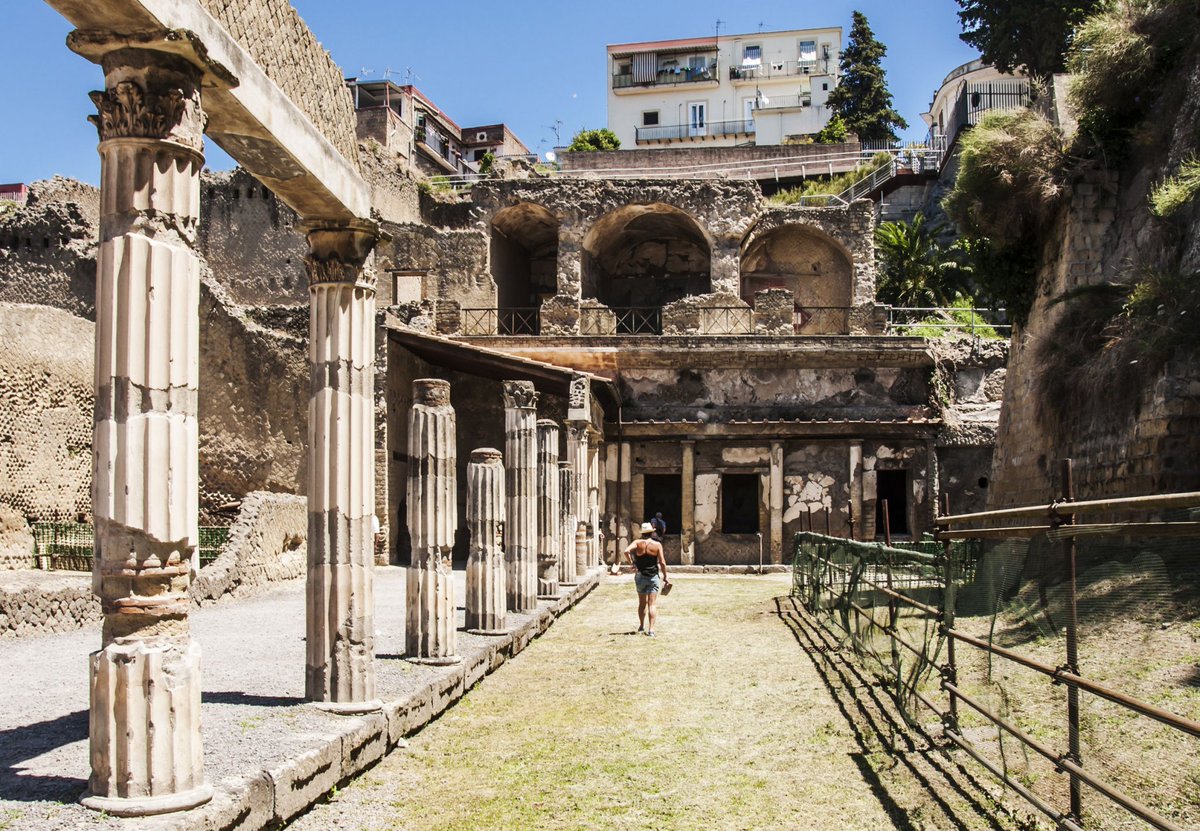 In the early eighties, digs at what had been the boat sheds on the beach uncovered over fifty skeletons. Some lay on the beach, otherwise huddled in the boat sheds. It appeared that all had died at the same time - but what killed them? /5 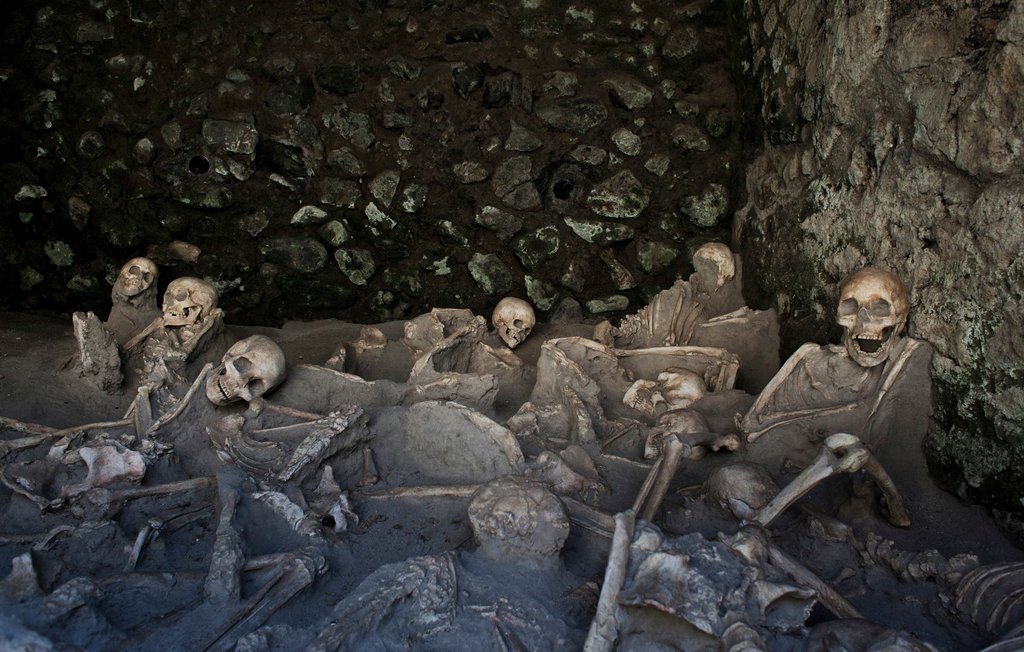 Well, that's pretty easy - pyroclastic flow. We're talking gas heated anywhere from 300 to 1000 degrees Celsius, and travelling over 100km per hour downhill. It appears that those huddling in the boat sheds copped it when it hit the beach. /6

Now, many of the skulls in the boat sheds showed fractures. Were these caused by things falling? People falling over? What? It was then suggested that the superheated gases caused people's head to explode.

Don't worry, they wouldn't have felt anything. Probably. /7

There was debate over this hypothesis, and many were sceptical of publishing this sort of thing, reluctant to sensationalise what was an ongoing project. More recently, however, a study by Federico II University Hospital recently added weight to the theory. /8

Archaeologists had noticed a red-black colouring to many of the skulls found, but nobody had really bothered to look at it more closely - probably a kind of singeing. This study examined these skulls with a mass spectrometer to identify what was responsible. /9

The team of scientists and archaeologists were very interested to discover that the red-black colouring contained heaps of iron. This was consistent with fluids being boiled, such as blood. It seemed that it had emerged from the skulls as they cracked open. /10

So, we can now fairly confidently say that those who sheltered in the Herculaneum boat sheds suffered a horrible, but mercifully brief death. It is now that that shortly after their skulls 'popped', their flesh was vaporised by the super-heated gases. /11

This goes a way to explaining why there aren't the casts at Herculaneum that there are at Pompeii. Sheltering patterns, combined with a possibly more direct pyroflastic flow hitting the town, meant that bodies were vaporised before they could be buried in ash and pumice. /12 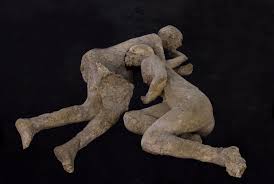 While talking about Herculaneum, we can't forget about its unsung hero. During excavations, the skeleton of a soldier was found, lying face down on the beach. It is thought that he may have been signalling to boats, or directing people into the sheds when the flow hit. /13 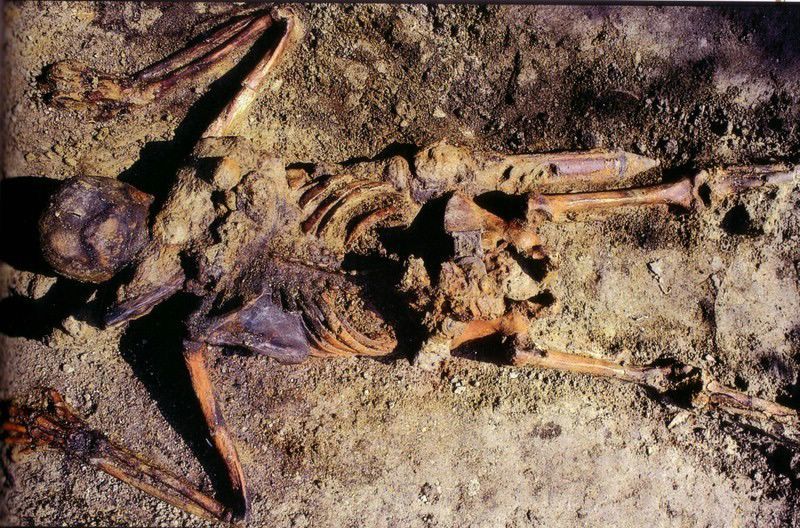 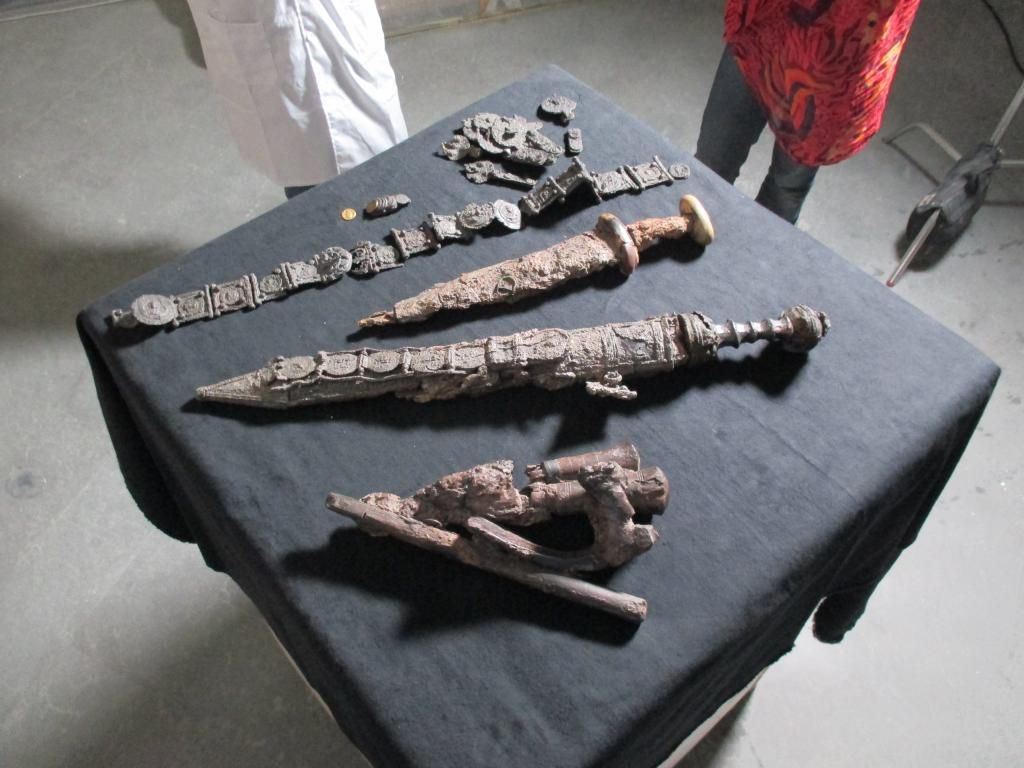 If you'd like to know more about the recent study, here's a great article from @PopSci that goes into depth about the findings. /14  https://www.popsci.com/vesuvius-blood-boil …

So, that's pretty damn gross, but also very, very interesting. Something to roll around in your head as you go about your daily tasks, confident that you don't live near an active volcano. Well, most of you... /FIN

PS. If you are a museum, library, gallery or archaeological service - or know people in that area - please ask them to let me know about new discoveries and findings. I have the time and inclination to learn all I can about them and tell their stories!