Eric Garland+ Your Authors @ericgarland Strategic analyst. Here for the Endgame and the next chapter beyond. Nov. 20, 2018 2 min read + Your Authors

Good morning, Counselor! I read it and it's legally ignorant to the point of sedition. I say this as a French major, so, it's pretty bad. Block away!

First off, fronts for the Main Intelligence Directorate of the Russian military are not publishers, but enemies of national security. So, the lede starts as a disaster.  https://www.theatlantic.com/ideas/archive/2018/11/prosecuting-julian-assange-puts-free-press-risk/576166/?utm_term=2018-11-19T14%3A42%3A34&utm_content=edit-promo&utm_campaign=the-atlantic&utm_medium=social&utm_source=twitter …

That's appears to be your lede. 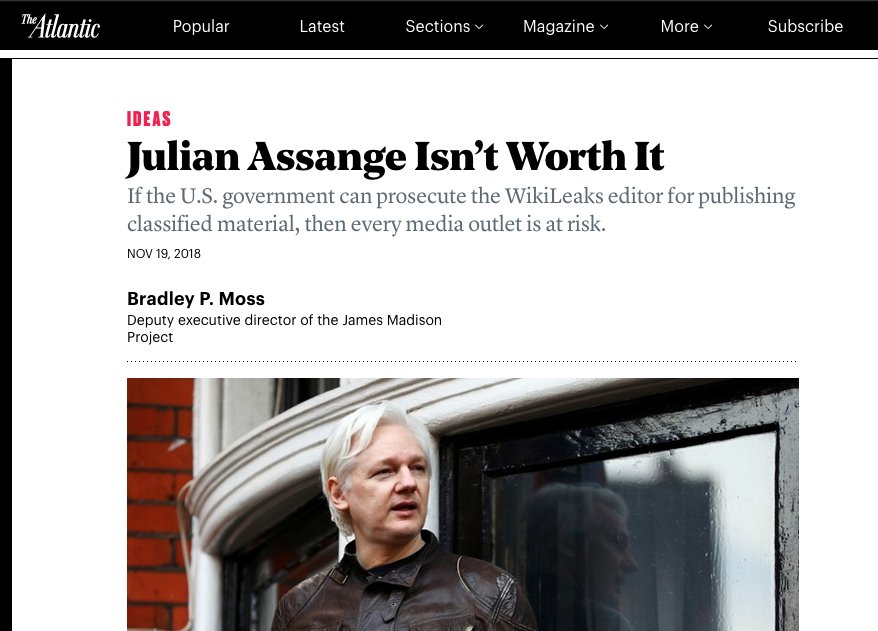 Julian Assange is, by every measure, a foreign political operative, and not covered by America's Constitution while hiding out in an embassy. What is the case law that allows foreign interference in our elections, counselor? And why should this override 18 US Code?

Manning didn't "leak" - she pleaded guilty to felonies that involved giving up our our counterintelligence posture. She was not exonerated, nor was she involved with "publishing."

Otherwise, the US MSM collaborated with foreigners in political warfare Ops through Wikileaks. 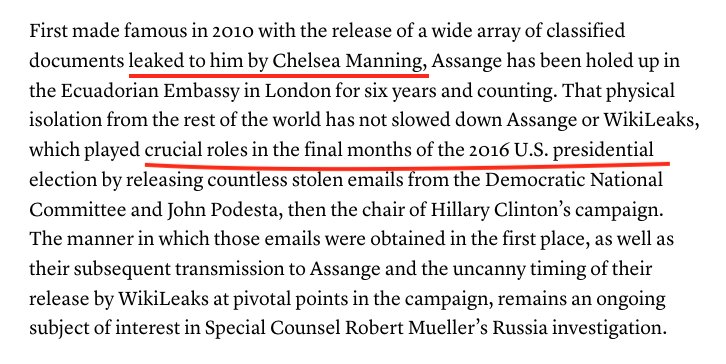 Counselor, you're already tearing apart your own argument. Felonies are not typical parts of legitimate media operations, so yes, I'm curious too what this spy/enemy gets charged with. And why I don't conflate him with American reporters who get our Constitutional rights.

Let me shorten this paragraph for you: "Felonies are crimes; they might even get prosecuted when they attack our democracy on behalf of global organized crime." Yes.

Hand-wringing about prosecuting National Security crimes? Is your argument, counselor, that the United States shouldn't be able to protect defense information? I look forward to that brief and its wending its way to SCOTUS.

Counselor, we've indicted many, many Russians including *the GRU with their patronymics included* for this matter, so this seems a touch obtuse.

Key paragraph here: you oppose the notion that these felonies under 18 US Code should be enforced. Well, you can pretty much leave public discourse. That is dangerous ignorance of a bewildering sort.

We're through the looking glass. Theft of classified information is a felony, not free speech, and I don't see a single bit of case law backing this up. And, again, I'm a French major. So this argument is a failure.

No, counselor, madness lies in conflating foreign hostile intelligence operations with holding our government to account through actual reporting which does not, by definition, REQUIRE THE COMMISSION OF NATSEC FELONIES. 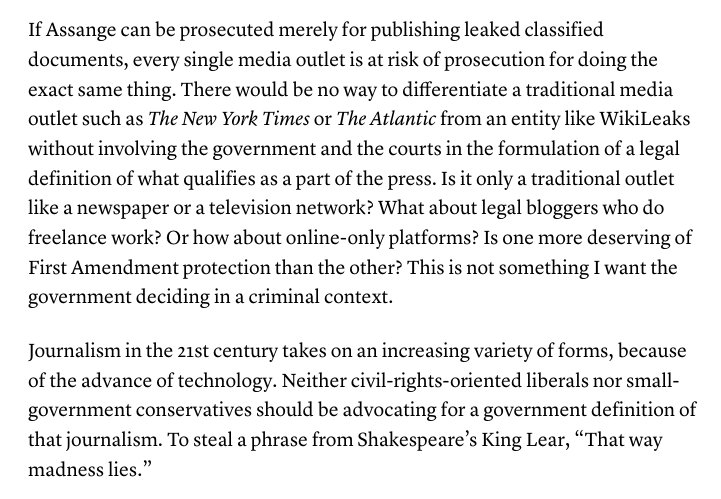 So. I read your article.