In times of instability, much like we face now, fascist movements find fertile soil. Seems like a good time to talk about a movement that quickly rose & fell in the hothouse of the thirties, yet can tell us much about how they operate - the British Union of Fascists. THREAD /1 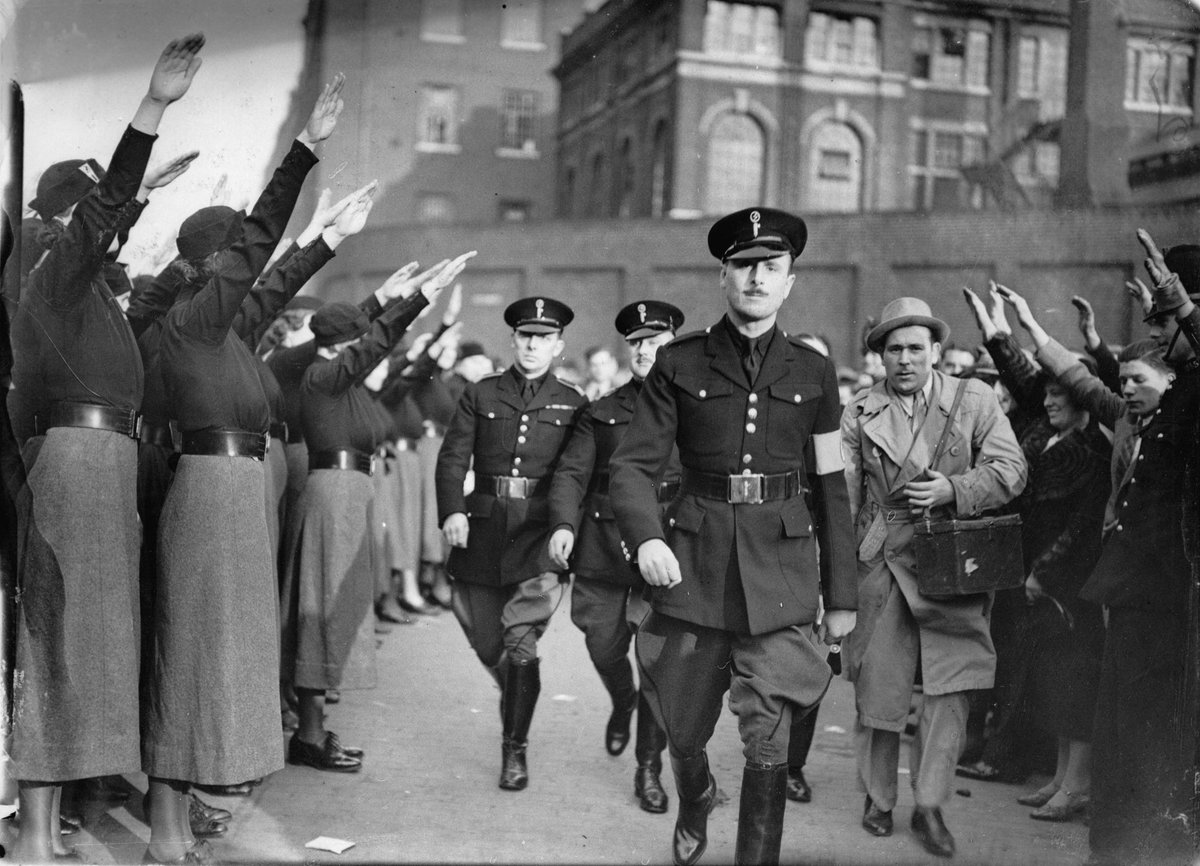 Utterly central to the British Union of Fascists was Oswald Mosley - born in 1896, in London, son of a baronet, from ‘good country stock’. During World War One, he served as a soldier and a member of the Royal Flying Corps. On paper, he was the picture of aspiration & success. /2 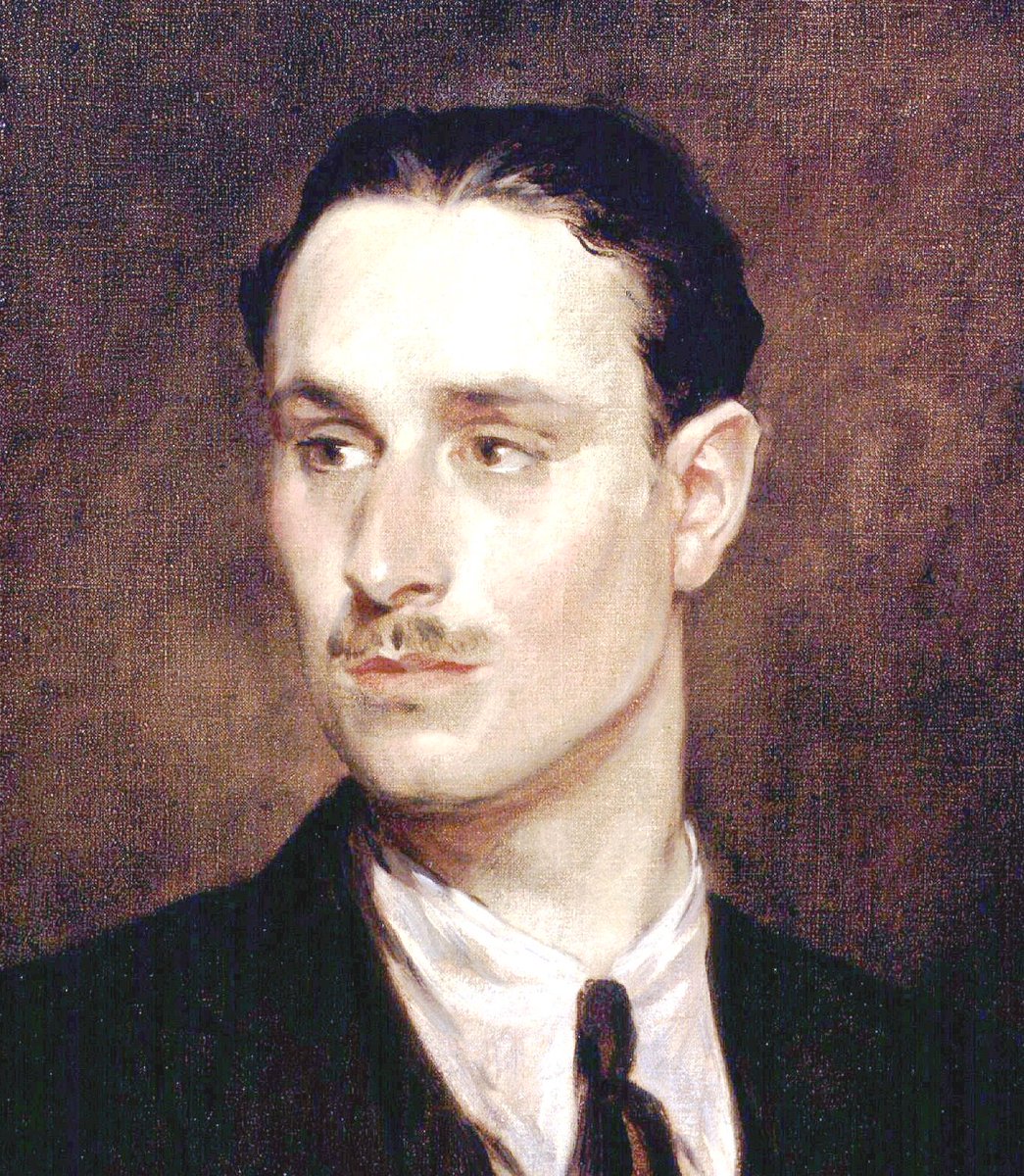 Despite the fact that fascists often promote themselves as revolutionaries, a large proportion of those directing movements represent partly a picture of conventional success within the system - the war hero for example, the noble heir or even better, a ‘self-made man’. /3 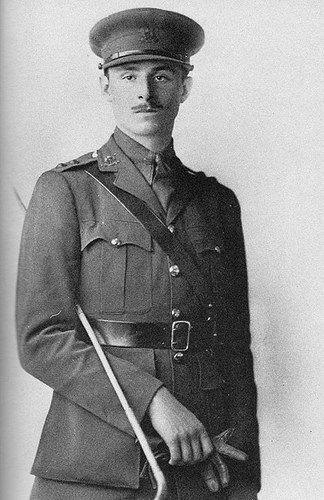 Following his military service, as a popular, well-respected gentleman, he decided to go into politics. Over his career, he drifted from office as a Conservative MP, to an Independent, then Labour, before establishing his ‘New Party’ in 1931 - which were creamed at the polls. /4 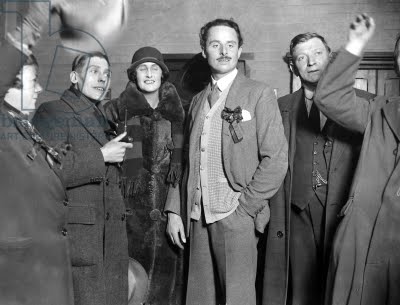 Leaders of fascist movements often don’t fit neatly into the taxonomies we’ve developed to describe political allegiances. After trying to fit within the ‘system’, they spurn it and instead draw on the support of the disengaged. This is what happened to Mosley at this time. /5

Faced with the support of disenchanted Britons, who were struggling in the early years of the Great Depression, yet rejected by the electorate as a whole, Mosley explored his options. In the early 30s, he visited the fascist regimes in Italy & Germany, examining their methods. /6 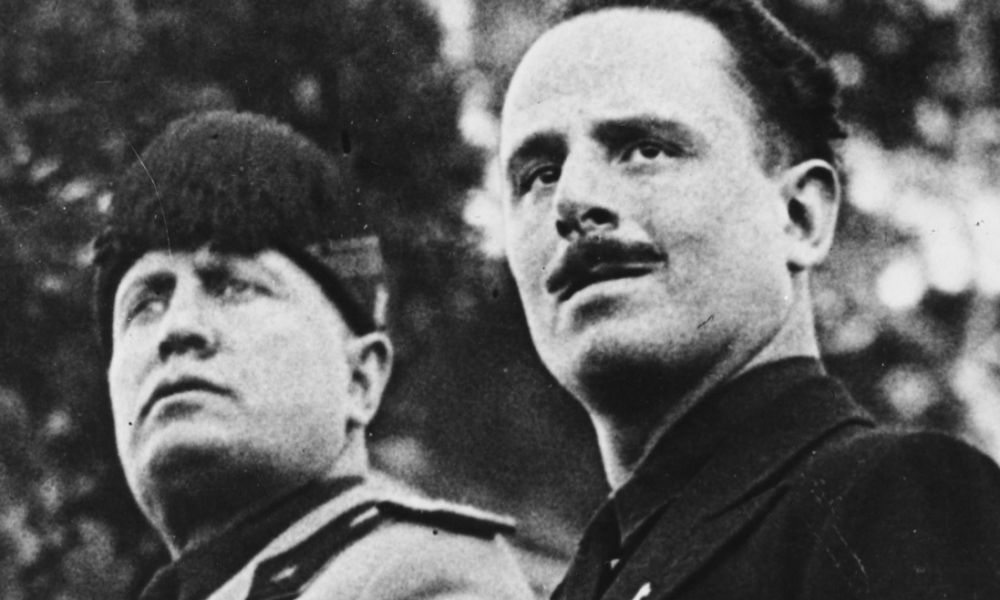 How close was Mosley to the Nazis in Germany? He married his second wife, Diana Mitford, in Berlin, at Goebbels house. He counted on senior figures of the Nazi regime as good friends. Mosley was an excellent networker, & took advantage of the support offered to him back home. /7

In 1932, Mosley created the British Union of Fascists. A considerable portion of those who joined from the ‘lower’ levels of society became part of a paramilitary section known as the ‘blackshirts’ - not unlike the Sturmabteilung (SA) in Nazi Germany. /8 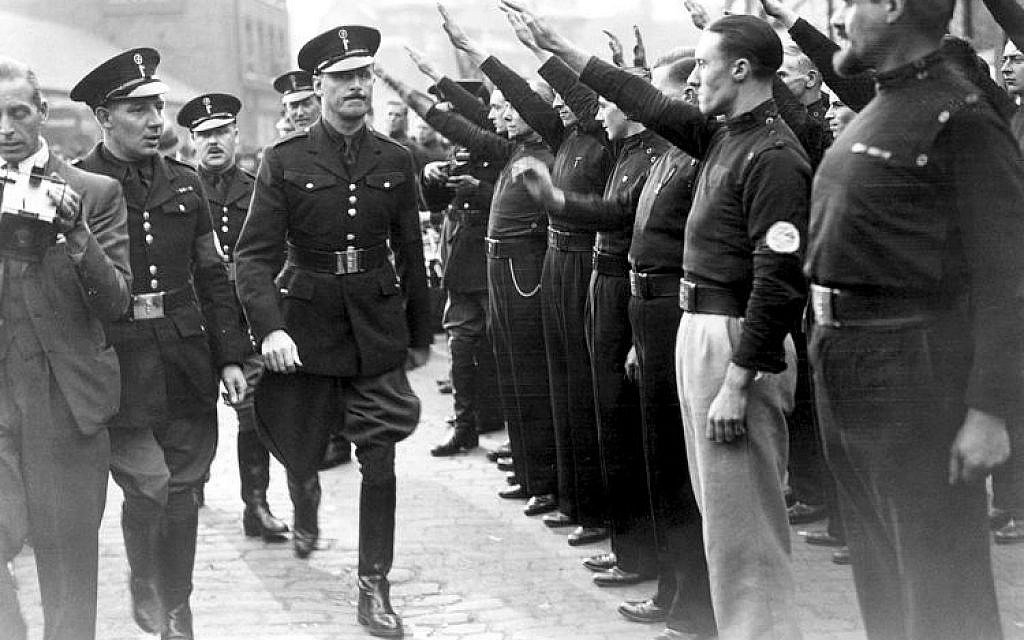 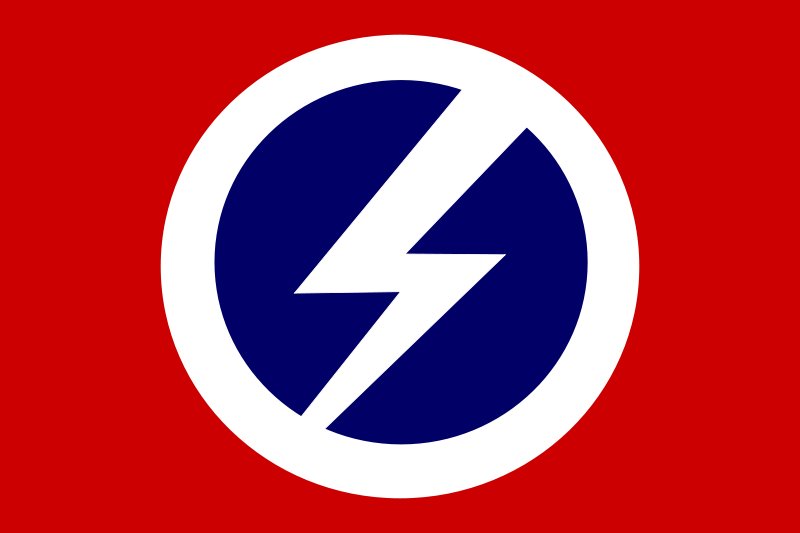 Like the SA in Nazi Germany, the ‘blackshirts’ began as a protective force, before taking on a reactive, aggressive role. Not only would they guard BUF events, but they would interrupt the meetings of left-wing groups, and engage in street fights with their perceived enemies. /9 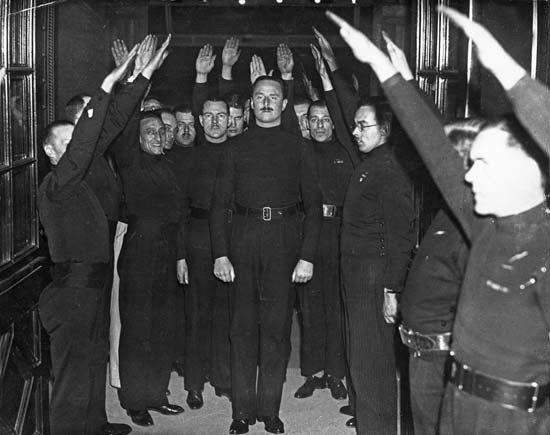 In the beginning, the BUF - and the blackshirts - had some respected backers. Lord Rothermere, owner of the Daily Mail once penned an Op Ed - ‘Hurrah for the Blackshirts’. Many members of the establishment gave their support, if not directly, then through donations. /10

That’s one of the central deceits of fascist movements - railing against the elites and hegemonies, while drawing support from the very same establishment they claim to oppose. Whether this makes them a mere illusory revolutionary force, much more a grift, I leave it to you. /11

For a few months, it seemed that the BUF could conceivably continue to grow as a movement. In the honeymoon of Hitler’s meteoric rise to power, with the horrors of the Nazi regime yet to really manifest, they seemed, at least outwardly, to be addressing the ills of the era. /12

In reality, however, they were adding to the violent anti-semitism of the era, assaulting Jews in the East End, leading to a growing chorus of alarm. Meanwhile, the police were essentially acting as security for the BUF, helping them into meetings, holding back protesters. /13

Fascist movements often use the police forces as protection, citing the supposed violence of the left or otherwise as reason for them to have the state act as their bodyguards. Even today, we see that fascists & white supremacists enjoy a close relationship with police. /14 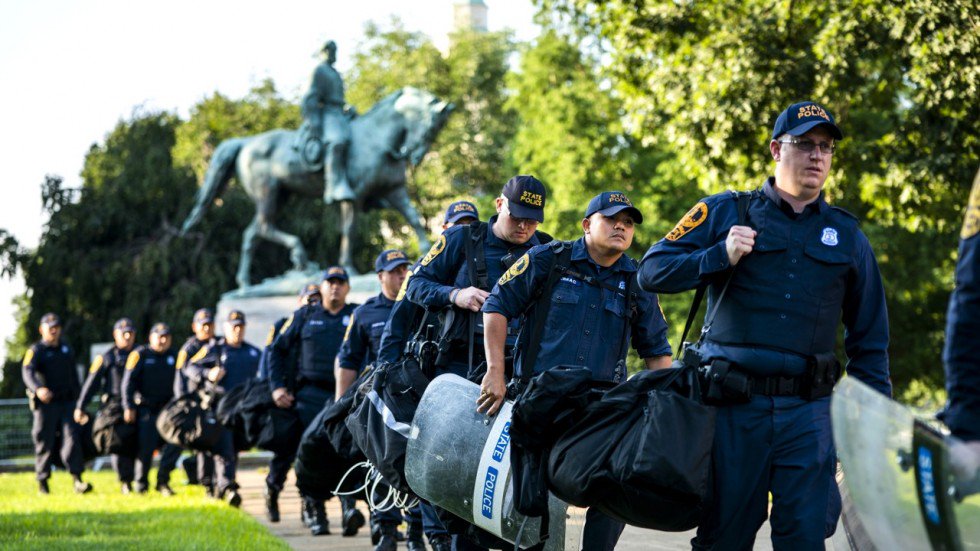 The BUF reached the apex of its popularity on July 7th, 1934, when Mosley addressed over 10,000 at the London Olympia, in a rally that borrowed almost everything from those held in Italy and Germany. There were searchlights, banners, military formations - the works. /15 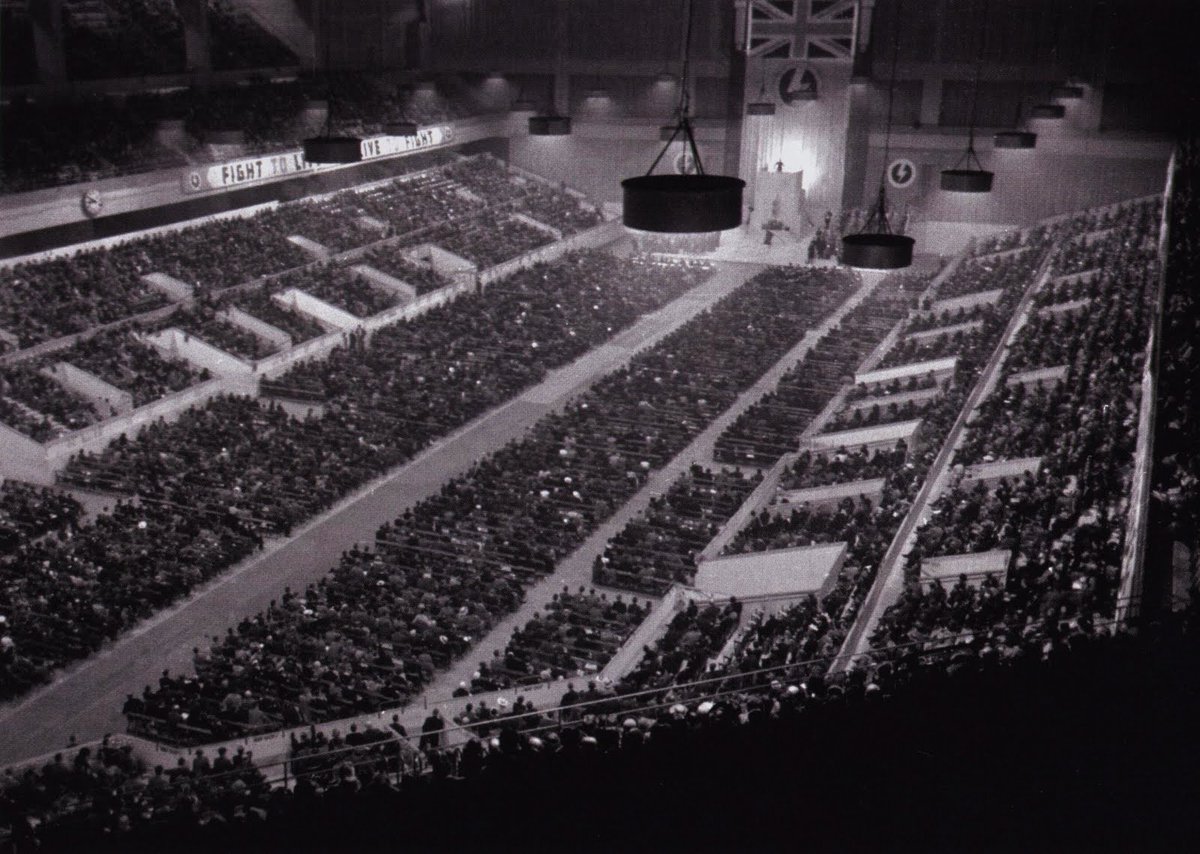 When communists and left-wing activists in the crowd began to heckle the BUF, blackshirts swarmed on them. There was fighting in the stadium even as Mosley spoke, with several protesters being quite badly hurt by the blackshirts, who overwhelmed them. /16  https://www.theguardian.com/politics/1934/jun/08/thefarright.uk …

The shocking violence and Mosley’s aggressive rhetoric led to legislation being passed that addressed the BUF, such as forbidding the use of uniforms in a political capacity. The media also barred them. This was a substantial blow to the movement, who traded on their image. /17

Many say that the nail in the coffin of the BUF was the Battle of Cable Street on October 4th, 1936. Mosley planned a march through the East End, as a kind of antagonizing gesture - he realised the power of provocative acts. The police were drafted in to deal with protesters. /18 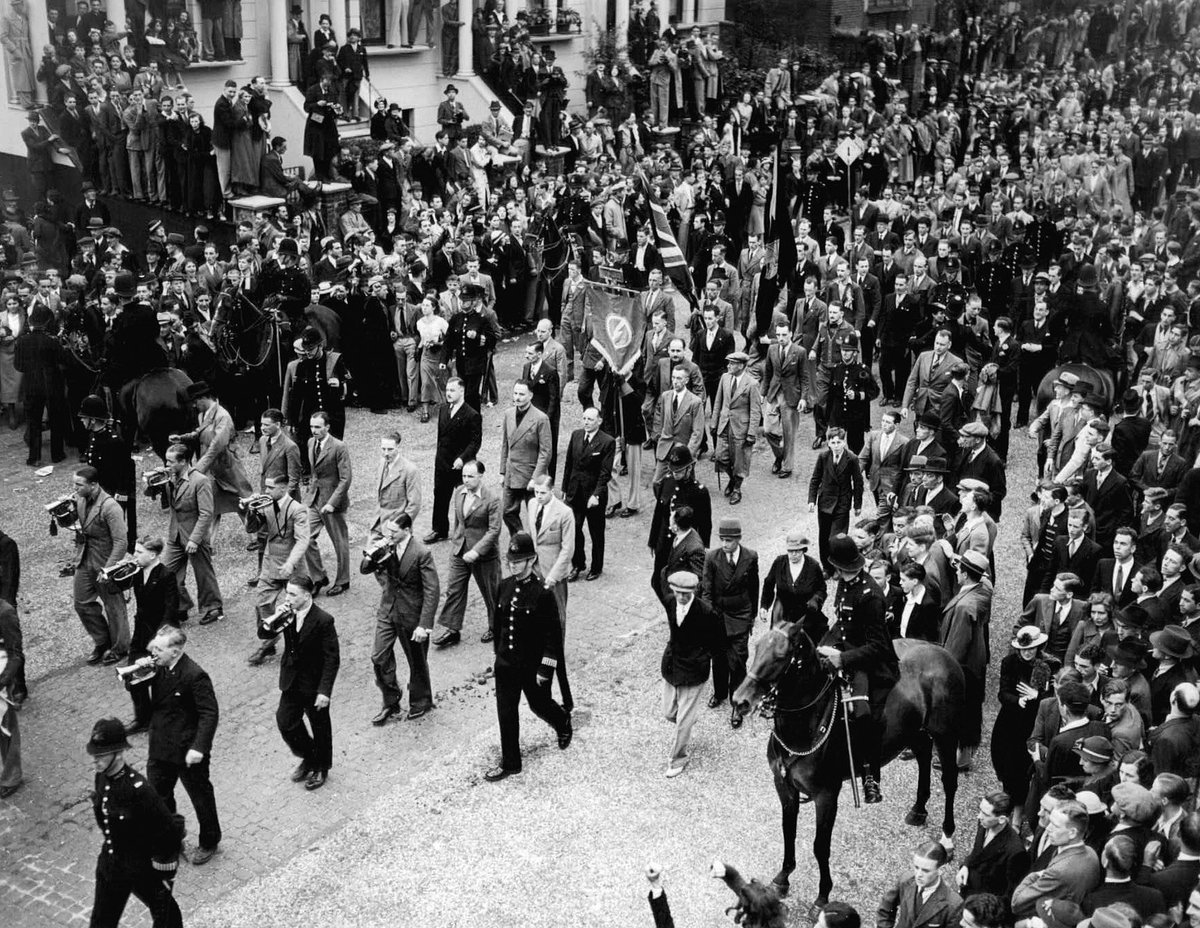 Outraged at fascists marching through their neighbourhood, Jews, communists, anarchists, migrants & unionists came together to block their way. Fights broke out with the police as the BUF were kept back. After hours, the march was cancelled. /19  https://www.bbc.co.uk/programmes/p00b0lg0 … 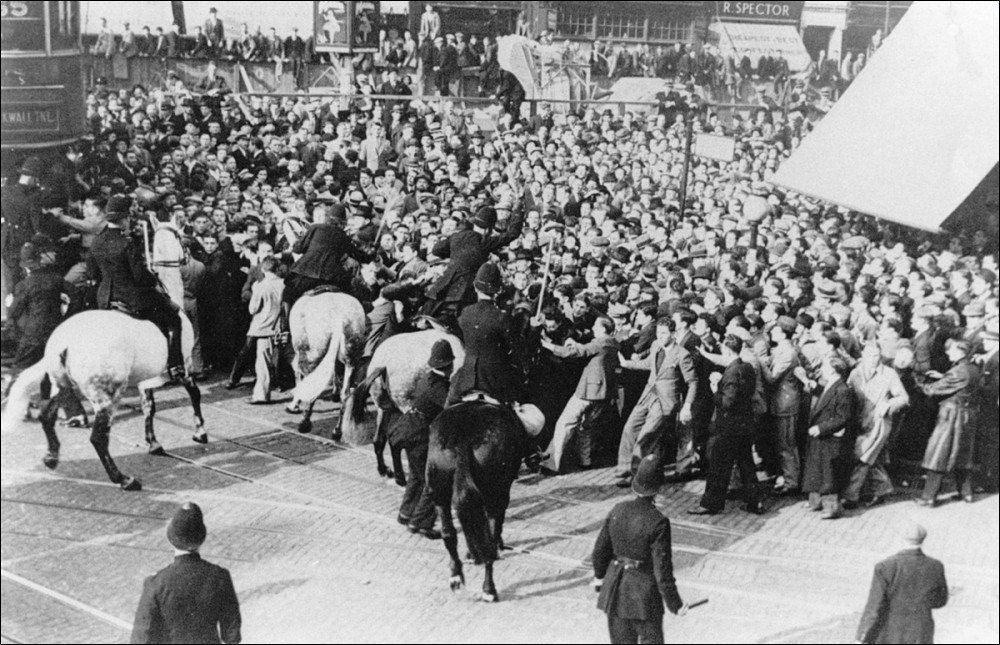 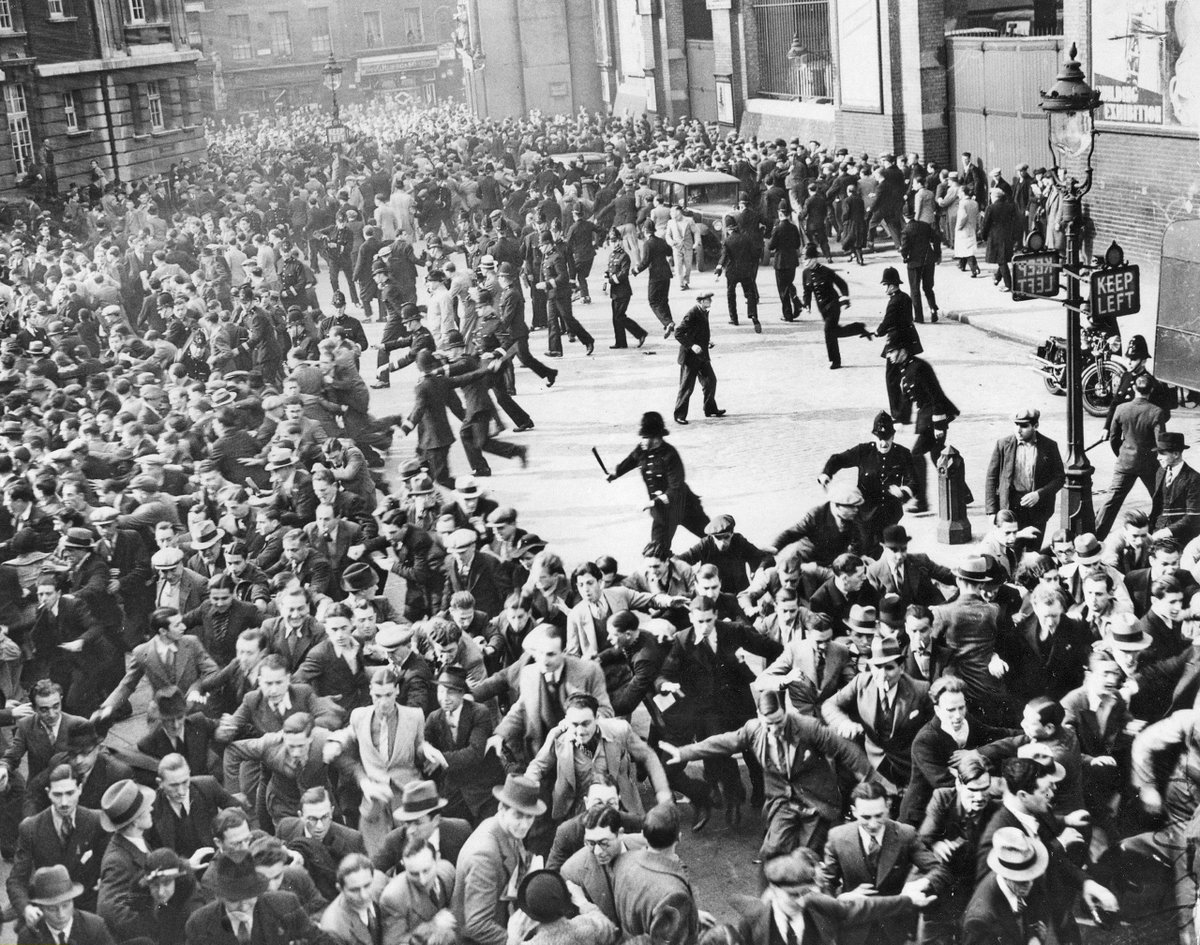 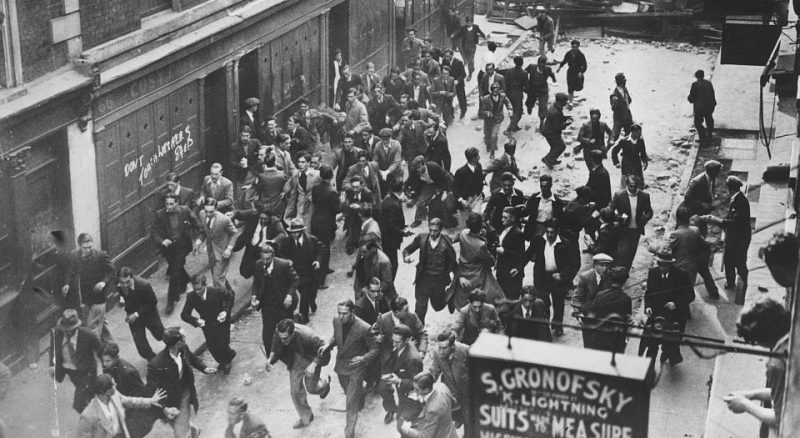 Now, we don’t know whether that would have been the real end of the movement - the Second World War came along and the movement was proscribed. Many former blackshirts joined up, or went back to work. Mosley himself was interred for a few years as a security risk. /20

After the war, Mosley would try again with political movements such as the New Party of Europe (agitating for a proto-EU, funnily enough), but every time, anti-fascist groups like the 43 Group would interrupt & brawl with supporters. /21  https://www.youtube.com/watch?v=PzzQVJZjHf4 …

The BUF, in the end, went with a whimper, more than a bang. When their defining characteristics and means of visibility were removed - their uniforms, their marches, their access to media - they ceased to be any kind of real threat. They soon, in fact, dissolved. /23

The BUF also suffered when severed from the overseas fascist movements that sustained it. Hitler’s Germany had kicked in over £3,000,000 in funding (in 2018 money) before the plug was pulled. After that, running the movement became a financial burden. /24

Now, none of this is to saw that the BUF weren’t dangerous, or a threat to society. They were violent thugs, with a philosophy of hate, who threatened the security of entire neighbourhoods full of those they considered enemies. They were, essentially, an establishment tool. /25

However, the story of the BUF does show that successful resistance to fascism is possible. What it takes are people coming together in sufficient numbers to block their path. What is needed are those in the media to be brave enough to refuse them access to a podium. /26 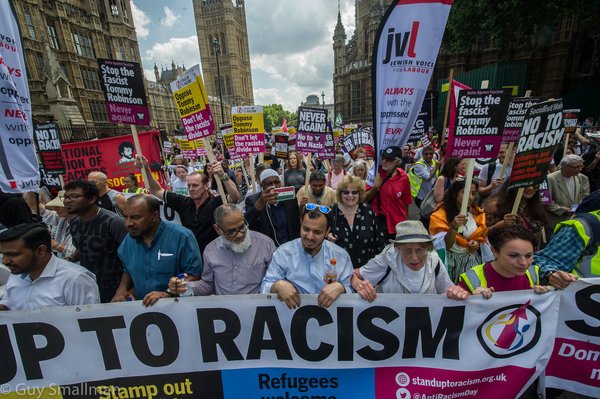 Intolerance of the intolerant is something that many have grappled with, in the age of ‘the marketplace of ideas’, and yes, Popper’s paradox can feel weird. However, it’s the best tool we’ve got in fighting the same forces that razed Europe to the ground under a century ago. /27 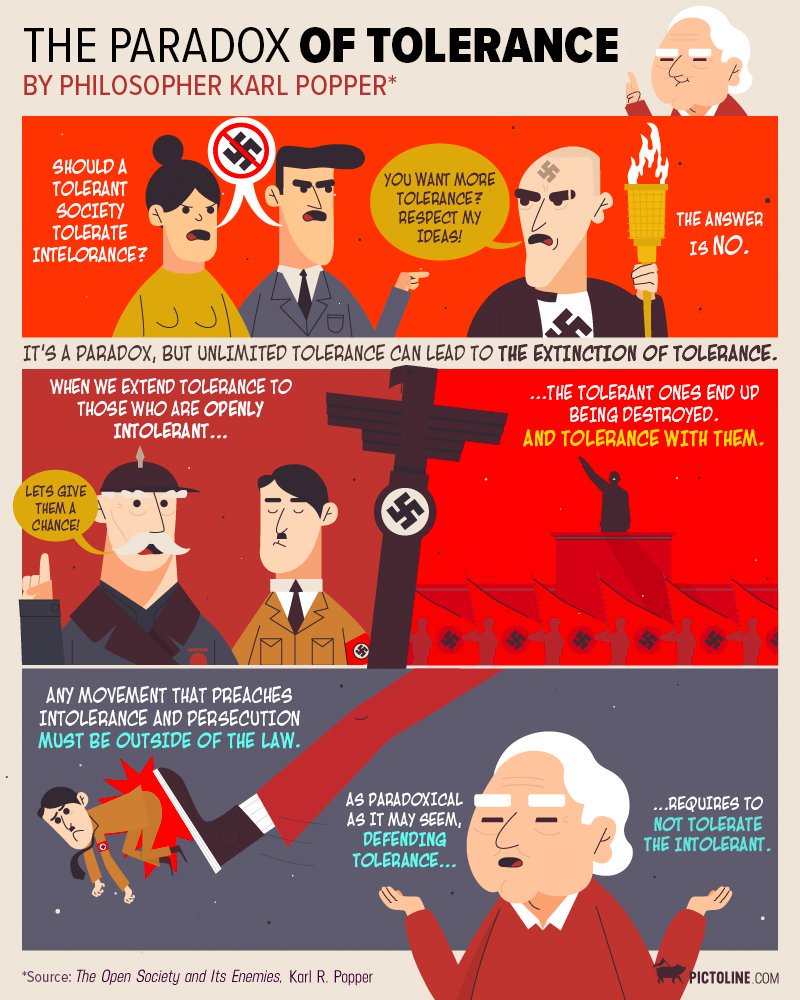 If you’d like to learn more about the BUF, I recommend this link, from the always excellent @JohnSimkin of Spartacus Educational. /28  https://spartacus-educational.com/Pfascists.htm

If you’d like to learn more about Oswald Mosley, I recommend this link, also from Spartacus Educational. /29  https://spartacus-educational.com/PRmosley.htm

I’d like to close with this. The BUF aren’t a historical one shot. They’re simply the natural product of fascist thought. Just because they fizzled doesn’t mean that a similar movement can’t learn from its mistakes, and enjoy as much supportmore. Thanks for reading. /FIN 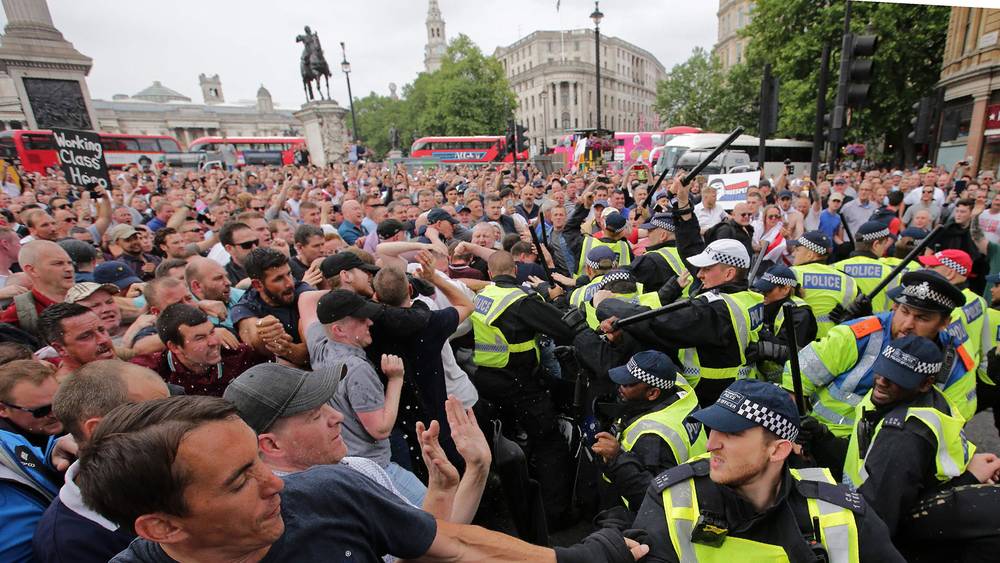