JUST IN: The U.S. National Climate Assessment is now public.

This is the report that the Trump Administration doesn’t want you to see. Years in the making, released on the day after Thanksgiving. #ClimateFriday

Here are some of the main highlights:

This report is mandated by Congress and focused on the impacts of climate change in the U.S.

Basically: This is what our best scientists think will happen to us as a result of the actions our government is (not) taking to address the most important problem in human history.
/2

300 experts in 13 federal agencies volunteered their time to make sure you have this information.

“Climate change is projected to significantly affect human health, the economy, and the environment in the United States.”

To expand on that finding:

“In the absence of more significant global mitigation efforts, climate change is projected to impose substantial damages on the U.S. economy, human health, and the environment. ...”
/5

“... Under scenarios with high emissions and limited or no adaptation, annual losses in some sectors are estimated to grow to hundreds of billions of dollars by the end of the century. …”
/6

“… It is very likely that some physical and ecological impacts will be irreversible for thousands of years, while others will be permanent.”

This can’t be emphasized enough: We are currently on course to *permanently* damage our land, our water, our country, and ourselves.
/7

The report finds these changes are already underway.

“The impacts and costs of climate change are already being felt in the United States, and recent extreme weather and climate-related events can now be attributed with increasingly higher confidence to human-caused warming”
/8

The report also finds that a radical change in current policy and action is necessary to prevent future catastrophic warming.

“Large reductions in present-day emissions…are necessary to achieve **any** long-term objective of preventing warming of **any** desired magnitude.”
/9

What we do now matters *a lot*:

“Decisions ... over the next few decades will set into motion the degree of impacts that will likely last throughout the rest of this century, with some impacts (such as sea level rise) lasting for thousands of years or even longer.”
/11

The report says “there would be virtually no chance” of keeping warming to safe levels if the countries of the world don’t meet their emissions reductions commitments under the Paris Agreement.

The report notes that President Trump has pledged to withdraw from the agreement.
/12

There’s a nice map that shows which states and cities are leading the way to reduce emissions and adopt climate-friendly policies:
https://nca2018.globalchange.gov/chapter/29/#fig-29-1 …
/13 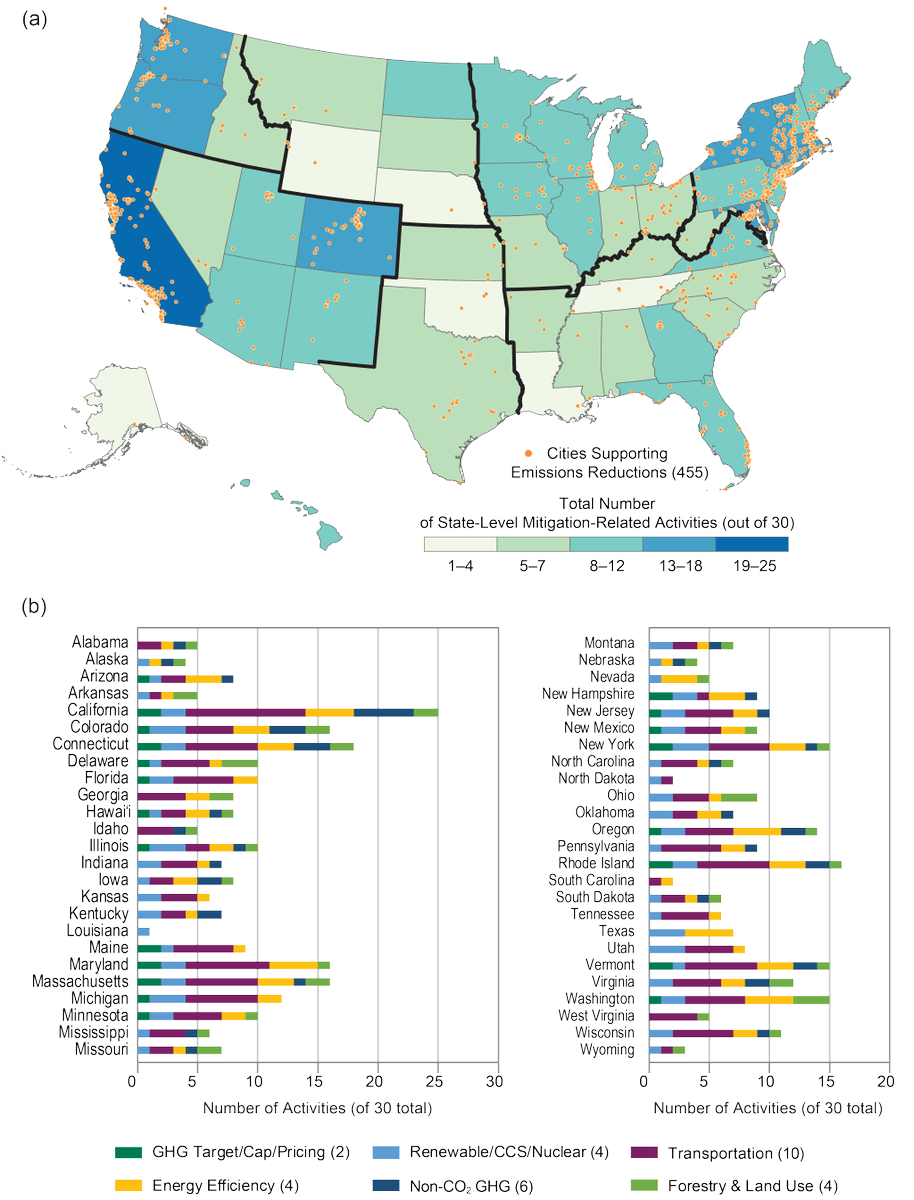 Going a bit deeper:
“The impacts of climate change are already being felt in communities across the country...presenting growing challenges to human health and safety, quality of life, and the rate of economic growth.”
/14

“Without substantial and sustained global mitigation and regional adaptation efforts, climate change is expected to cause growing losses to American infrastructure and property and impede the rate of economic growth over this century.”
/15

“Climate change affects the natural, built, and social systems we rely on. ... These interconnected systems are increasingly vulnerable to cascading impacts that are often difficult to predict, threatening essential services within and beyond the Nation’s borders.”
/16

“While mitigation and adaptation efforts have expanded substantially in the last four years, they do not yet approach the scale considered necessary to avoid substantial damages to the economy, environment, and human health over the coming decades.”
/17

“The quality and quantity of water available for use by people and ecosystems across the country are being affected by climate change, increasing risks and costs to agriculture, energy production, industry, recreation, and the environment.”
/18

“Impacts from climate change on extreme weather, air quality, and the transmission of disease through insects and pests, food, and water increasingly threaten the health and well-being of the American people, particularly populations that are already vulnerable.”
/19

“Without substantial and sustained reductions in global greenhouse gas emissions, transformative impacts on some ecosystems will occur; some coral reef and sea ice ecosystems are already experiencing such transformational changes.”
/21

“Expected increases in challenges to livestock health, declines in crop yields and quality, and changes in extreme events in the United States and abroad threaten rural livelihoods, sustainable food security, and price stability.”
/22

“Without adaptation, climate change will continue to degrade infrastructure performance over the rest of the century, with the potential for cascading impacts that threaten our economy, national security, essential services, and health and well-being.”
/23

“Many coastal regions will be transformed by the latter part of this century. ... Even in a future with lower greenhouse gas emissions, many communities are expected to suffer financial impacts as chronic high-tide flooding leads to higher costs and lower property values.”
/24

“Outdoor recreation, tourist economies, and quality of life are reliant on benefits provided by our natural environment that will be degraded by the impacts of climate change in many ways.”
/25

The report also provides a huge amount of information at the regional level on how climate change is already and will continue to reshape the United States:

In short, climate change is already a huge problem in the United States and it’s expected to get a lot, lot worse. Our nation’s best scientists could not be more clear about that truth and see the need to act immediately — even if our nation’s leaders do not.
30/30