The special effects for the computer-display in the glider from John Carpenter's Escape From New York (1981) are really neat.
They're a neat wireframe display of the city, presumably from some kind of radar.

The neatest part? They're not computer generated.
Well, they're partially generated. The overlaid text is, yes, but the actual wireframe? it's a physical model!

They made them by making a model of the city painted fully black, then put UV-florescent tape along the edges of the buildings.
Lit with a blacklight, you can only see the tape, not the matte-black blocks representing buildings.

So they faked computer graphics with practical effects.

You can get a hint of it being a real model in this clip. Watch the right view, and notice how there are shadows and the light moving.
Computer generated wireframes would have neither

I've not seen any discussion of it elsewhere, but I think there's more going on here than is usually explained. See, I think this is the last of the practical-standing-in-for-computer shots.

Cause this is the next one, and I think they switched to actual computer graphics for this one.
Notice the shapes on the right? they're hollow, rather than hidden-line like you'd have with real models.
The lines are also thinner.

Then one more shot of computer graphics.
Notice how the vertical line on the left moves at the end? that's supposed to be the side of the screen, whoops... I think they're moving/zooming a camera pointing at a screen

This does make sense. There's earlier computer graphics in the film.
So I think maybe they did final wireframe scene as a computer-generated test, then switched to the practical version when they realized it would be too complex/expensive to do the whole sequence that way.

But at the same time, it's done, so why not put it in the film anyway?

Here's a picture of what the model looked like when lit normally. 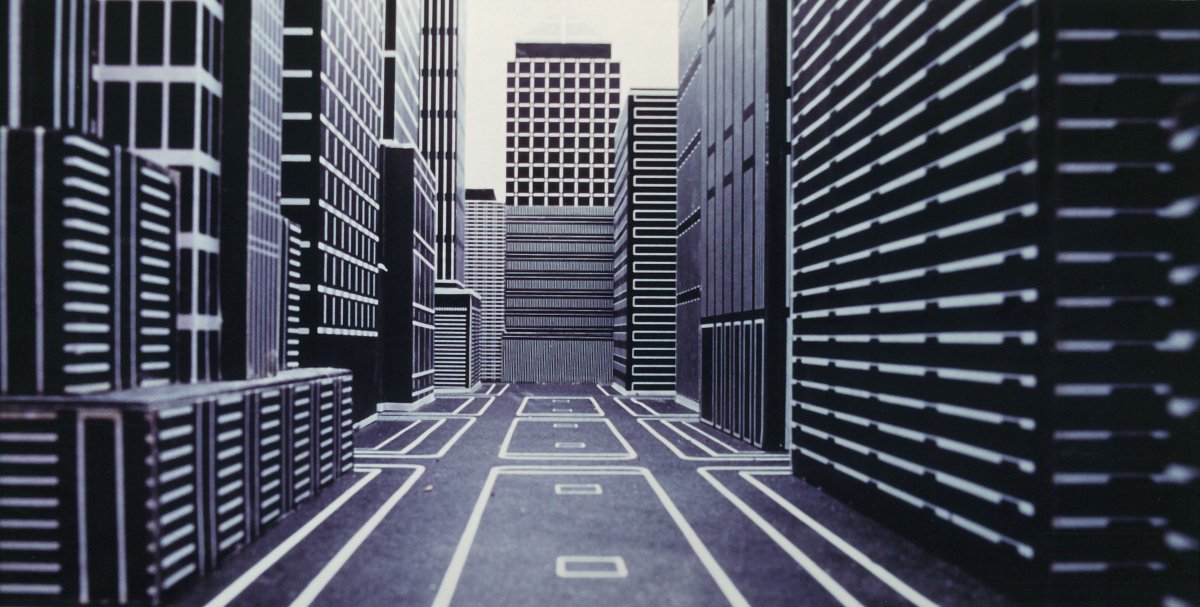 Here's another picture of it, showing the scale:
http://www.theefnylapage.com/pressexclusiveinterviewsjohncwash.htm … 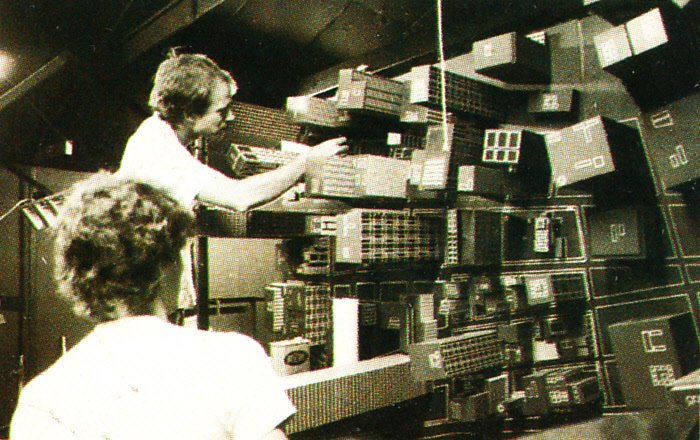 BTW, the special effects wizard who did this was John C. Wash, who did another computer-generated animation in a film that you definitely saw.
This one!

BTW, did you ever notice that that animation has the "dish" of the death star placed on the equator, which isn't where it is on the actual model? 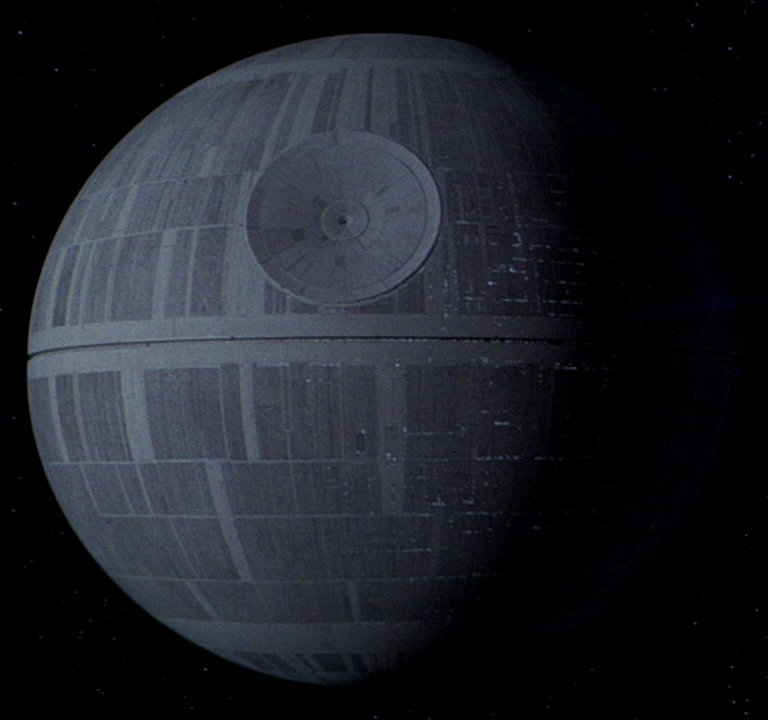 This is because the animator was going off this concept art by Ralph McQuarrie, which was an earlier design.
By the time it'd been changed, there was no time left to re-render the animation. So it's wrong in the final film (even the remastered versions!) 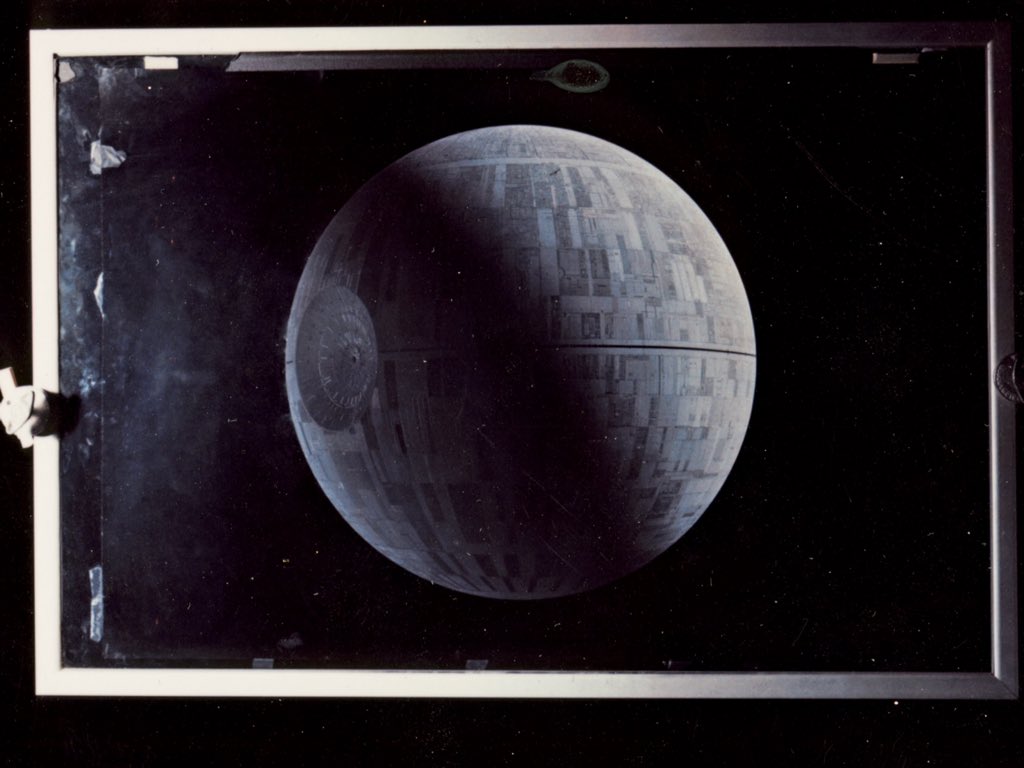 re-rendering was expensive back in the 80s. Computers were slow.
Like, there was a problem discovered when rendering this complex computer-generated shot from Star Trek II: The Wrath of Khan (1982).
But you probably can't see it at this resolution...

It's in this section. The effect of the mountains rising up had a minor issue: they couldn't really preview the effect until they'd rendered it, and rendering it took a very long time.

And right around when they'd rendered up to this point, they realized that the camera was going to hit the mountain ahead.
Whoops! But changing the layout would mean they'd have to re-render HUNDREDS of frames! that would take forever.

They applied a manual override to the generated mountains and just sort of magic a valley into existence over the course of two frames, and the camera magically flies right through it.

There's also a part of the screen that doesn't change between two frames.
I think this is because we're seeing through the scenery and seeing the underside of later mountains?

BTW, I forgot to mention the other Star Wars connection:
The company hired to do this ground-breaking computer animation?
George Lucas's Industrial Light and Magic!

Speaking of which, did you ever wonder how they make the Star Wars titles?
They're simple to generate them on a computer, of course, but this had to be done in 1977 or earlier. Computing power was at a premium.

The answer is remarkably simple, and shows how much they had to work to do even the simplest effects back in those days...
They painted them onto glass, then had a motorized camera move down them! 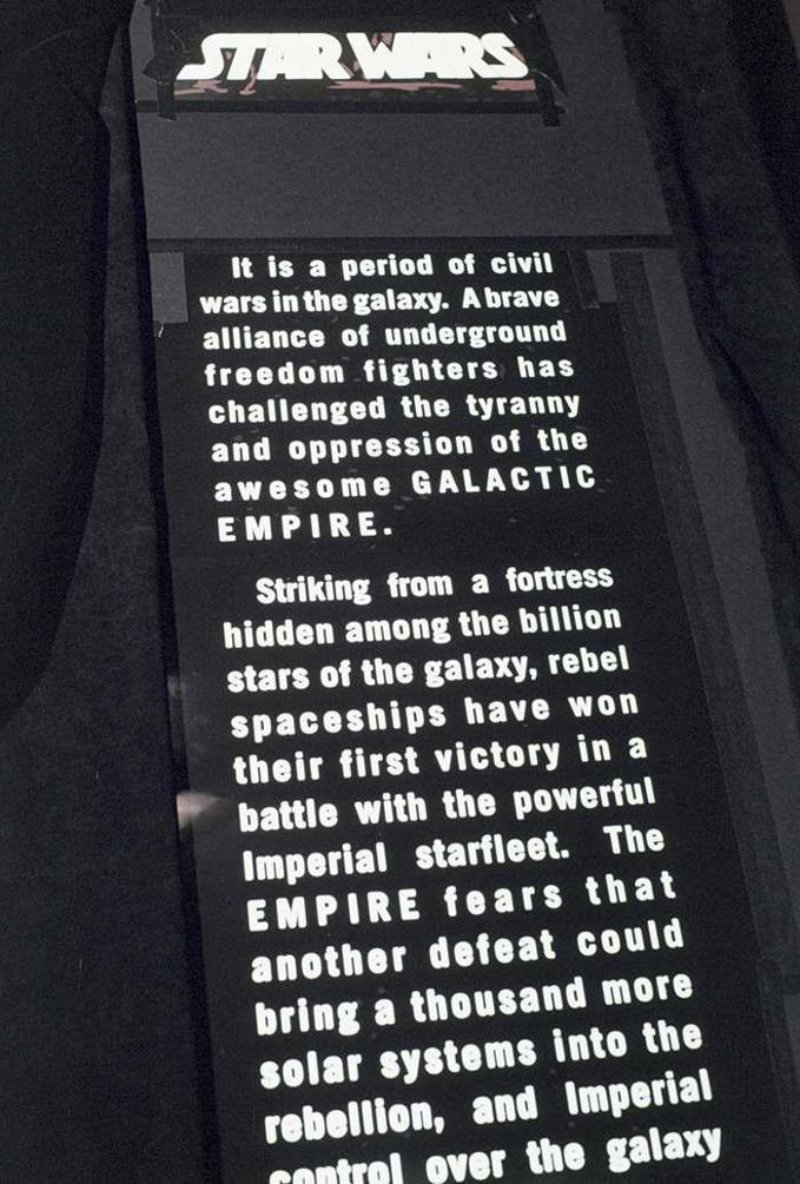 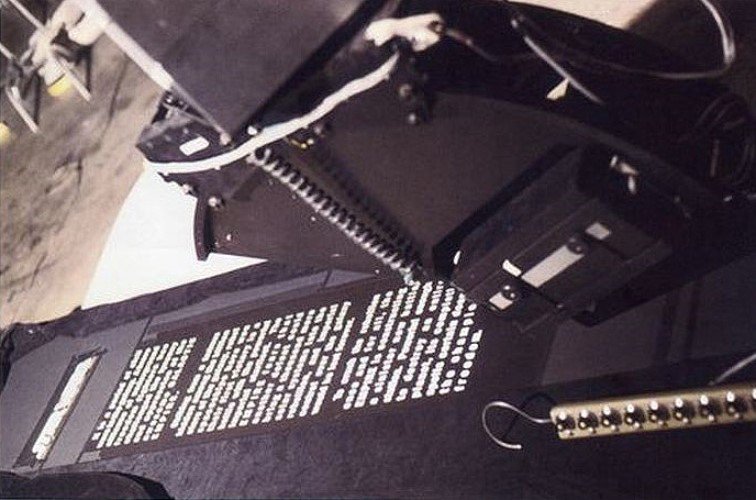 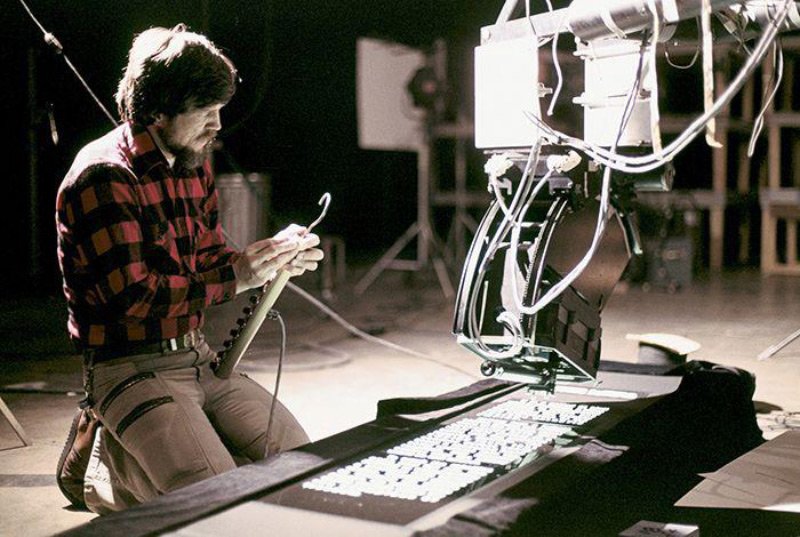 And bringing it back to John Carpenter and titles...
The Thing (1982) has a really neat looking title! It's not computer-generated, of course.... It's actually really simple.

the first part is a piece of glass with "THE THING" painted on it, in reverse, so only the letters are transparent.
Then there's a black plastic garbage bag, which is being set on fire so it melts slowly from the bottom up, revealing the light behind it

The final step is how it's made to cast rays, and glow.
In front of the piece of glass & garbage bag, there's a fishtank full of smoke.

It's a very neat, unique, and simple effect that you can totally see once you know how it's done.
It's really just a piece of thin plastic burning up!
But shot right, with the transparency in front of it, and the smoke? It looks AWESOME.