1/ The narrative around Facebook and web publishers continues to distort and polarize after each outlet encounters layoffs/shutdowns. Each one is tragic, with a real human cost, as well as a societal one. But a lot of this is normal, unavoidable and misunderstood

2/ Facebook has continually proven itself to be a bad partner (faulty metric, algo changes, swinging priorities/subsidies, content=commodity mindset). Everyone knows this when they CHOOSE to invest in FB + FB criticisms overlook that the network enabled these companies to exist

3/ Facebook made it uniquely possible to build a digital news/publishing brand (more in the last decade than ever in modern history). Audience/distro costs plummeted, a brand instantly had global reach, audiences quickly scaled to 10s of millions, making capital raises easy…

5/ Just look at how many youth-oriented, pop/culture media sites started in last 10 years. How many places post the newest Marvel trailer. In pursuit of traffic/scale, they all converged with no distinct editorial identity. Tech blogs quickly became digital culture outlets

For every 100 unique viewers, only 17 occasionally returned and 3 regularly. And up to 80% of regulars only came back from other social clicks, versus direct access /brand value 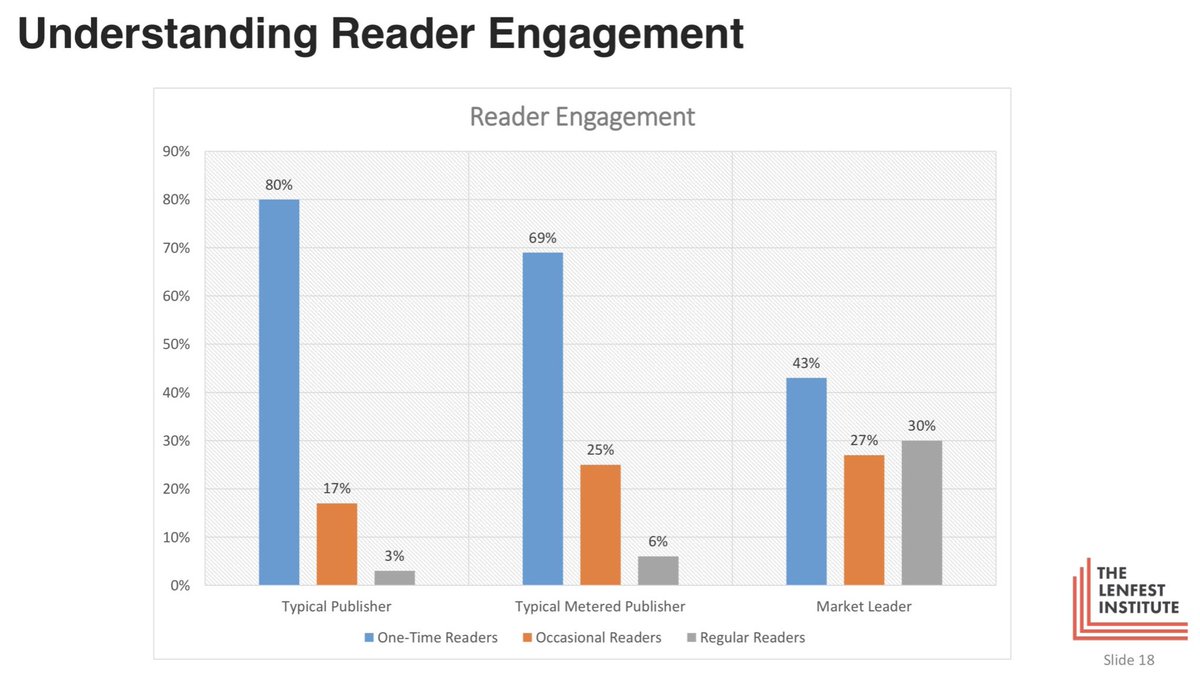 7/ This is where we conflate "popular" with "necessary" or "valued".

This doesn't mean the content was bad it often was superb – but if it doesn’t change viewer habits, if traffic is just a question of virality and timing and Facebook, that’s not a biz / audience you can sell

8/ Put another way, Facebook might have been unfair and a bad partner, but if an algo or priority change at the company costs a web publisher 30-50% of their traffic, who was really responsible for most of the publisher's success or revenue or value?

9/ FB and VC funding rarely kills a business that fulfills a real need. There are important proof points. The most scaled, best funded, most successful publishers (BuzzFeed, Vox) are still struggling to be profitable; it’s contrarian to assume smaller generalist can via editorial

10/ In fact, all of these brands are seeking profitability by getting out of D2C distribution, preferring high margin TV/film production businesses (e.g. selling a show to Netflix) or podcasts

11/ More broadly, even the most successful scaled publisher – New York Times – has only 2.5MM digital news subs (Netflix, Spotify, etc. add this almost monthly). That’s only $300MM in revenue, and a $4B enterprise value business.

12/ Few would say that a highly fragmented market where the clear leader puts up those numbers is a good one to enter.

13/ Compare this to other digital categories with a high volume of entrants, such as D2C consumer goods (e.g. Warby, Harry's, Gilt, Movement, Bevel etc.).

Many have failed, many more will – but they’re competing with an incredibly valuable category with $100B incumbents

14/ I don’t think Facebook has ever managed its media business well, especially with partners. And made many unforced errors. But no one *pivots* from a highly successful business to a speculative one. You pivot from one that doesn’t work in the hopes that another will

15/ When web publishers jumped after digital video, they were often promised an opportunity that didn’t really exist, but they pivoted because text wasn’t working. Else they’d have just *expanded* to video

16/ You can get here via back of the envelop. Many outlets overspent, but if you estimate their cost structures, it’s clear that they were unprofitable because they simply couldn’t generate an even modest amount of revenue.

The market is the final arbiter

17/ Ultimately, when companies don’t need to exist, or can't prove they should, they usually don’t.

This doesn’t mean their content shouldn’t exist. But there aren’t enough consumers who actively VALUE these brands, or care enough when they disappear. And thus they go away.

Fin/ This is really sad. I spend most of my day reading web-native essays, coverage, etc.

I love journalists and journalism. I support many for and not-for profits. It makes me smarter, more curious, better at my job.

Fin 2/ This thread isn't really that unique to the web either, just exacerbated by it. As @BenedictEvans has said, most of the value in journalism wasn't where we originally thought - it was local distribution at scale. (Con't)