Rogue or team player? The complex before and after reaction to He Jiankui in China.

“A milestone accomplishment China has achieved in the area of gene-editing technologies” -People's Daily, November 26th, 2018.

Since deleted from internet. 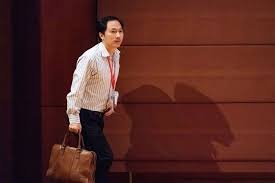 Everyone is condemning He Jiankui right now---everyone in China saying they knew nothing about the CRISPR baby project. Yet it is more likely that many, including in government did know.

JK He had started 7 biotech companies and had millions in research grants. That's the kind of person a lot of people will know. We also know in 2017 He widely advertised his interest in making a baby to US scientists and geneticists. Seems likely he did the same in China.

Have a look at this post from Jing-Bao Nie, a professor at Bioethics Centre, of Otago, New Zealand, on the Hastings' center blog. Ill tweet out parts of it.  https://www.thehastingscenter.org/jiankuis-genetic-misadventure-china/ …

Nie says He Jiankui 's CRISPR baby effort violated Chinese guidelines and shocked the world. So then: "Why then, did He dare to risk condemnation of the whole world (what Chinese would call “mao tianxia zhi da buwei”)? And why in China?

"He’s genetic misadventure is unsurprising. A series of political and social forces in China in the past several decades have created a fertile environment for Chinese researchers to undertake daring but unethical (or ethically problematic) “world’s firsts.” "

"He’s human experimentation constitutes one of the fruits of his personal ambition nourished and directly supported by China’s authoritarian pursuit for a nation strong in science and technology. The drive to be a science superpower is part of an even grander Chinese dream .."

He being portrayed as a renegade today. But actually:
*In 2018, nominated for China Youth Science and Technology Award
*part of Central Government’s top science program, Qianren Jihua (Thousand Talents)
*owner/shareholder of at least 7 gene companies worth >$.5bn

And He’s project outline for the babies had nationalistic tone. Will be a "standout" for China and bigger than IVF itself

“a milestone accomplishment China .. in the area of gene-editing technologies” it said.

What caused China to publicly reverse course and exactly when? May have started with strong condemnation from @kiranmusunuru in the AP story reporting the CRISPR twins. It's "unconscionable ... not morally or ethically defensible."

From there the condemnation grew on social media. And China started to delete websites and remove information. But what is the true Chinese position and aims?

Are *both* the CRISPR baby project itself and the changing official reaction to it reflections of the same phenomenon?

"The Chinese model of sciences is authoritarian and nationalistic. It often lacks transparency." _ Jing-Bao Nie (END)

What aspect of the the claimed CRISPR twins in China do you find most concerning?