Question: What’s up with Trump, Flynn, and Turkey?

2/ Lawfare explains the difference between failing to register under FARA and §951  https://www.lawfareblog.com/no-mariia-butina-wasnt-charged-violating-fara …

Both criminalize working for foreign entities without informing the government.

FARA basically applies to lobbyists working for any foreign organization or company.

3/ §951 requires that a person is secretly an agent of a foreign government (other than an official diplomat, etc.)

Remember: agent=spy (or, as Lawfare puts it, §951 is Espionage Lite)

4/ So . . .the facts: Flynn (“Person A”), Flynn Intel Group (“Company A”), Flynn, and Kian agreed to take $600K from "high level" Turkish officials to mount a smear campaign against a Turkish cleric (Gullen) living in Pennsylvania.

5/ The Turkish government accuses him of orchestrating an attempted overthrow of the government. They compare him to Khomeini.

The DOJ won't extradite Gullen because there isn’t evidence to warrant it, and obviously he’d be killed.

6/ Flynn and Kian's task: deliver findings and results including, but not limited to, making criminal referrals against Gullen.

Flynn was an active player in the scheme: He was copied on key emails, met with Turkish officials in NYC, slapped his name onto an op ed, etc.

7/ It's safe to conclude that Flynn wasn’t indicted with Kian because he cooperated with Mueller.

What does Trump have to do with all of this?

8/ Trump has gone to great lengths to defend Flynn.

After Flynn’s hearing (when the judge rebuked Flynn's claim of FBI misconduct) the WH stuck to the story: "The FBI broke standard protocol in the way that they came in and ambushed General Flynn.”  https://www.apnews.com/e783d26dc4a805a49222b4cd3f1a2ac4 …

9/ Turkey, remember, imprisons more journalists than any other nation:  https://www.statista.com/chart/3310/china-incarcerates-more-journalists-than-anywhere-else/ …

Consider also that Mattis mentioned one reason he was resigning: He thinks China and Russia pose a danger to the US. Apparently Trump doesn’t👇

11/ Consider also that Trump’s call with Turkey led to his decision to pull out of Syria.👇Meanwhile, he ignored Mattis.
https://apnews.com/ec2ed217357048ff998225a31534df12?utm_source=Twitter&utm_campaign=SocialFlow&utm_medium=AP …

People like to say that Trump does what authoritarian regimes want him to do because they have compromising material on him.

A lifetime of befriending, doing business with & laundering money for authoritarians created lots of compromising material.

Trump works with dictators because he likes them. That came first.

13/ Here’s the sobering part:
Trump fawns over authoritarians, hires and surrounds himself with agents of authoritarian governments, but he retains 42% approval according to 538 aggregate of polling (the aggregate I most trust):  https://projects.fivethirtyeight.com/trump-approval-ratings/?ex_cid=rrpromo …

14/ Why? Because America has always had a large strain of authoritarianism.

This is not to say that 42% of Americans are authoritarian. Some of the 42% don’t understand what they’re supporting, some are single issue voters, etc.

But a lot of them are👇

15/ Paxton, who wrote a classic book on fascism, argued that the world’s first fascists were not Italians. They were the KKK.

Andrew Jackson was elected twice. Liberals criticized his Trail of Tears, his embrace of slavery, etc. But he was relatively popular. 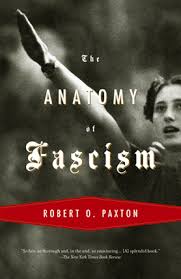 16/ Lincoln only won in 1860 because the pro-slavery vote was split 3 ways. (OK only white males could vote, but still)

FDR won the presidency in 1944 with only 53% of the vote, and that was after giving us social security, minimum wage, etc, and. . .
http://behindthescenes.nyhistory.org/happy-132nd-birthday-franklin-delano-roosevelt/ …

I see frantic tweets like “we can’t keep this madman in office for 2 years! We have to get him out sooner!”

Deep breath.
If you think the Senate will take out Trump and Pence and make Pelosi president, consider Nixon and Agnew.

18/ They resigned one at a time. Nixon selected a new VP with no criminal liability. IF Pence and Trump are ousted, expect the same.

The GOP will remain authoritarian and retain a lot of power.

So the next two years will be tough. But liberal democracy will win.

How do I know?

19/ Because of the midterms, because Pelosi will soon have lots of power, and because Mueller knows what he’s doing.

So don't wear yourself out with the constant spectacle and crisis, get involved in local politics, protest peacefully, and start planning for the 2020 election.