#BREAKING
Germany faces the biggest hacker attack in its history.
Private data of almost 1000 German #Bundestag, #Regional Parliament & #EU delegates was leaked.
I worked through the leaked data all night. It's shocking!
Not affected so far: #AfD.
https://www.bild.de/politik/inland/politik-inland/hacker-angriff-daten-von-politikern-gestohlen-und-veroeffentlicht-59349480.bild.html …
#BTleaks

The leaked data, which was illegally collected until October 2018 and released December 2018, but just found now, is still publicly available.
I searched through it 5 hours last night, read maybe 3%of it and already found cases of corruption and bad political scandals.
#BTleaks

It will be thus very hard for journalists to determine what they do with the data now.
We must act responsibly, but we must also not forget that if we do not report accurately on the info in the leaked data, others – right-wing extremists – will do it.
Unique situation.
#BTleaks

Also hacked were around 40 German public TV journalists and 10 artists, most of them known for their left-leaning political stance.
Also from the artists, comedians, moderators etc partially very private data was leaked, in some cases nonetheless only mobile number.
#BTleaks

You didn’t see me using the word “Russia” so far as there is no evidence for its involvement so far.
But what I can say is that hackers needed months if not years to collect, inspect, categorize and describe the leaked data, pointing at a group of high professionalism.
#BTleaks

The fact that the #AfD is not affected by the hacking scandal so far does not mean it is behind it.
My personal evaluation is rather that someone wanted to create exactly this discrepancy and increase political tensions among German Bundestag parties resp. left & right.
#BTleaks

The Twitter channel of the hackers - active since 2015 and posting the #BTleaks hacks all over December 2018 - has finally been suspended. 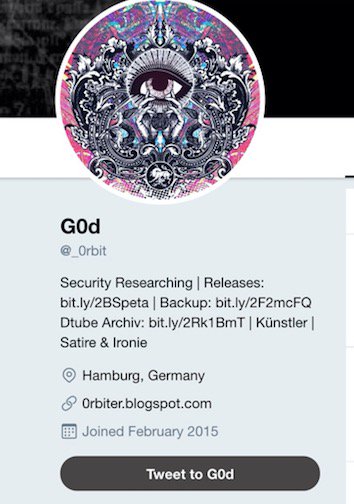 Government presser: German intelligence had NO IDEA of the #BTleaks until last night!
Also the chancellory was informed last night.
A Supergau.
Hacks were ongoing for months or years. 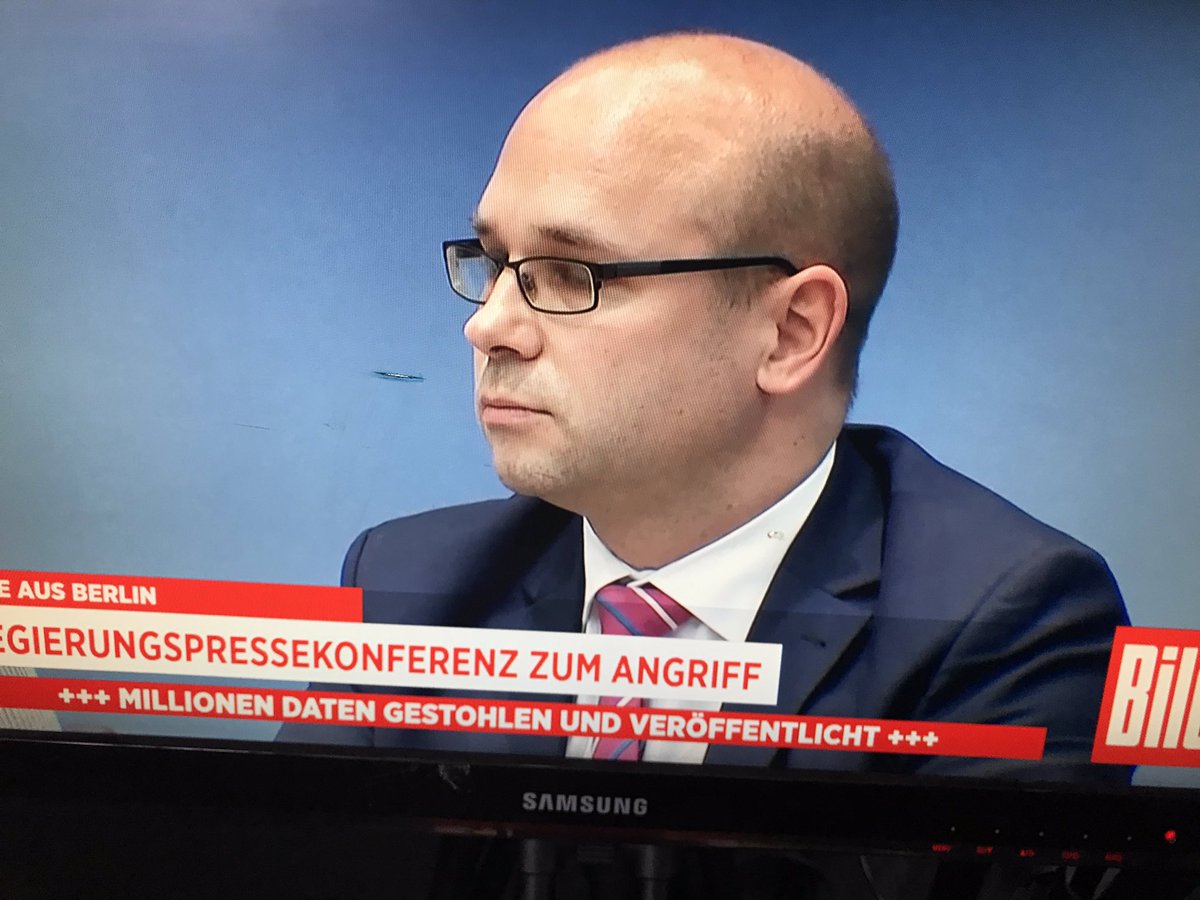 #UPDATE
We can now say that some of the data collection of former or current German MPs reach back to 2009.
We can also say that the hackers removed single data sets after they collected and screened them.
This raises the possibility of more, compromising, data being out there.

"We will not use such sensitive data in any way, not now and not in the future."

@BILD's editor-in-chief @jreichelt released a statement, explaining how we as Germany's largest newspaper will deal with the hacked and leaked private information.
#BTleaks

I was interviewed by the @BBCNewshour this evening, trying to make sense of the #BTleaks.
The 5 minute interview starts at 34:20.
https://www.bbc.co.uk/sounds/play/w172w25knzm06y5 …

#UPDATE 1/2
Day 2 of the #BTleaks and first accusation of dysfunctionality within the German cyber security structures arise.
The "Federal Office for Information Security" BSI was in contact with some hacked MPs since early December.
However, Germany's "Federal Police Agency" BKA

2/2
,Germany's Parliamentary Control Council, intel services and the public were not informed.
Before the BSI chief admitted the MP contacts yesterday evening, his spokesperson claimed at the govt. press conference that the BSI just learned about the #BTleaks on Thursday evening.

WHICH PARTIES ARE TO WHAT DEGREE AFFECTED BY THE #BTleaks AND WHERE DO THE LOCAL MPs COME FROME.
My colleagues counted and categorized the victims.
https://www.bild.de/politik/inland/politik-inland/opfer-des-datenklaus-halber-bundestag-von-hacker-attacke-betroffen-59363786.bild.html … 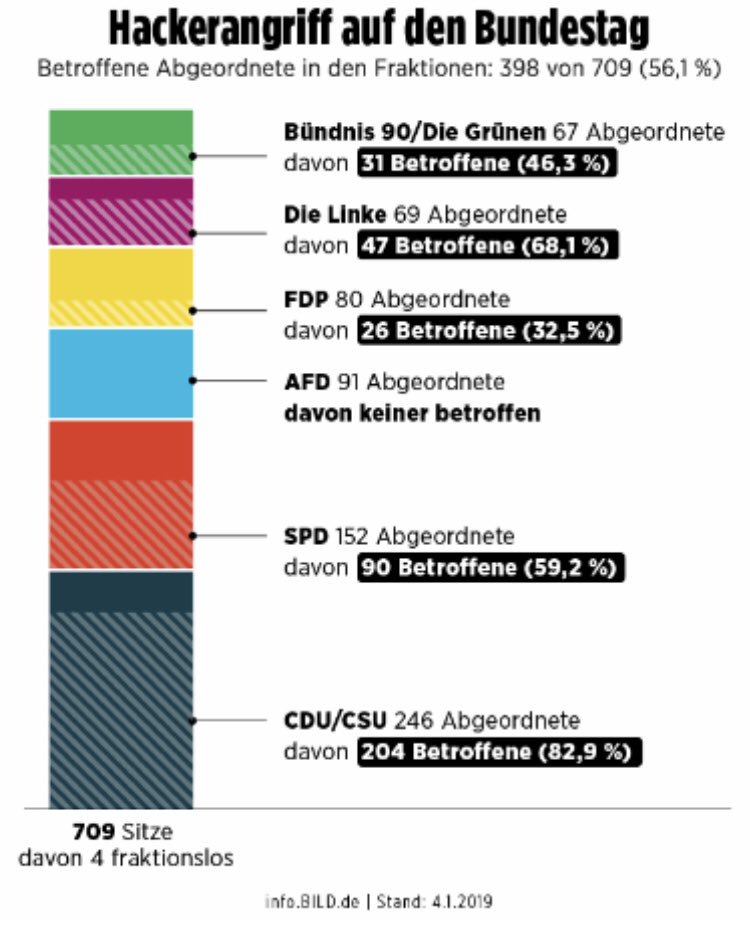 #BREAKING
We (with the help of 2 GER hackers) possibly found one of the hackers, responsible for the #BTleaks.
He shared the hacked & leaked information weeks to months before GER authorities & the public found out about the hack.
And it's still out there!
https://www.bild.de/bild-plus/politik/inland/politik-inland/cyber-alarm-in-deutschland-die-spur-der-hacker-59378514.bild.html … 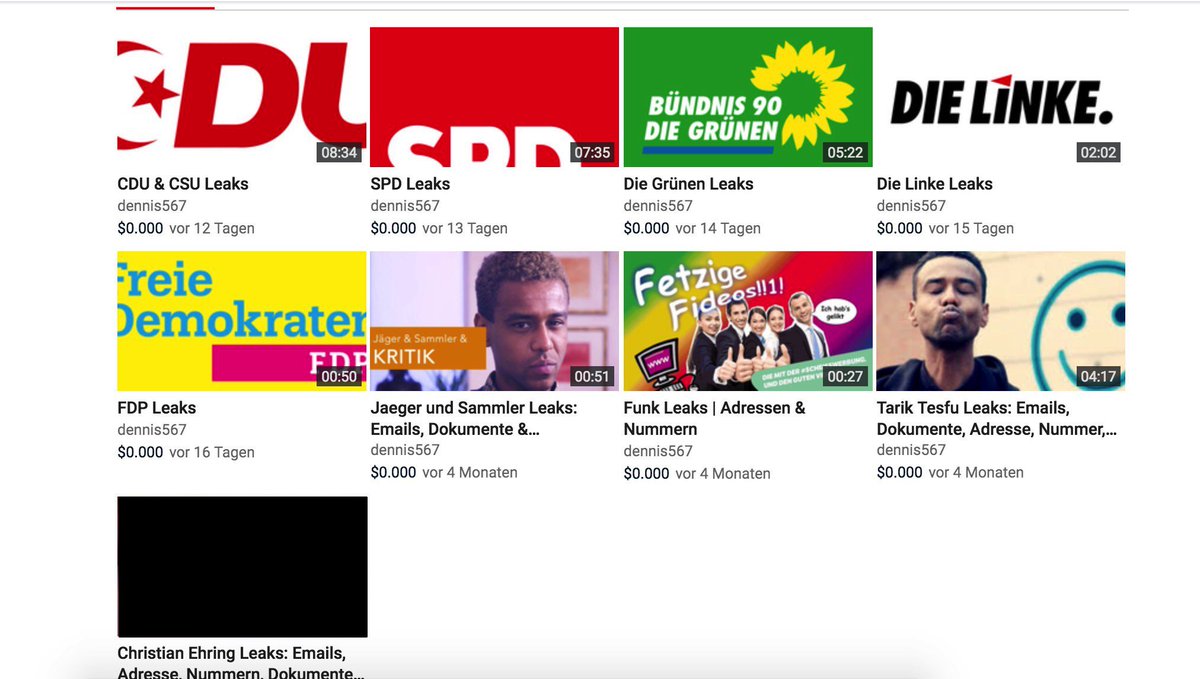 The suspected hacker seems to be a right-wing extremist from what he posted under pseudonyms in different forums.
He endorsed the NPD as well as the NSDAP and complained that the AfD "will not get away the clans" (with what he referred to all other parties in the Bundestag).

Disclaimer: All information according to our open source research only & must be verified by the authorities.
Because we did not hack anyone!

One Twitter account which we attributed to one of the #BTleaks hackers is still online!
It contains a link, leading to hacked data like an email list of the German Federal Crime Agency BKA & Skype contacts of YouTubers.
#UPDATE: It was suspended 2 hours after our story went live. 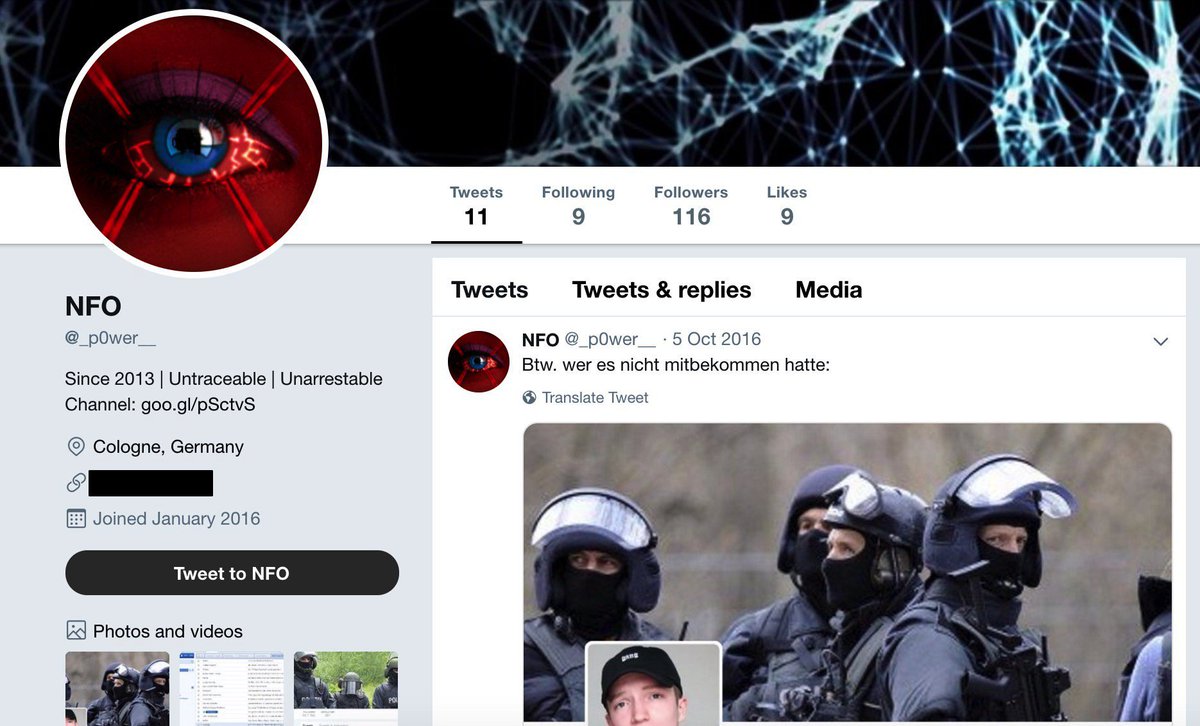