Tony Schwartz says the president has too much power.


This is only true because the GOP members of Congress are not acting as a check on presidential power.

2/ The GOP is obeying Trump as if he is an autocrat.

Example: The House and Senate pass (overwhelmingly) a piece of legislation.

Trump doesn’t like it because he wants a wall, so he exercises his veto power under Art. I, sec. 7.
https://www.history.com/topics/us-government/veto …

3/ Instead of overriding the veto, as it has the power to do, the GOP folds.

(Aside: this is why impeaching and removing Trump won’t solve the nation’s problems)

More and more Americans are waking up to the fact that Trump was installed in the WH by a hostile government.

4/ The drafters of the Constitution considered the possibility that a president might be elected who was beholden to foreign interests.

That’s why they included a remedy: Congress acts as a check on presidential power.

5/ At the first sign of corruption, fraud, or a foreign influence in the election, Congress SHOULD have stopped everything and conducted a meaningful investigation.

Instead, members of the Congressional GOP attempted to obstruct and delegitimize any investigations.

6/ By the way, the only reason we’re even talking about whether a sitting president can be indicted is because Congress failed in its job.

Had the president been removed when his involvement with Russia was uncovered, he wouldn’t be a sitting president at indictment time.

Over its 165 year history, the Republican party has gradually morphed from the anti-slavery party championing the values of liberal democracy to an authoritarian party.
More here👇

8/ Profs. Levitsky and Ziblatt in their book👇 explain what we’re seeing.

From the beginning Trump exhibited warning signs of an autocrat. He:
💠rejected democratic norms
💠denied the legitimacy of opponents (i.e. says they are criminals)
💠tolerated and encouraged violence. . . 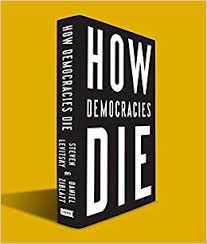 9/ and he was willing to curtail civil liberties, i.e. free press.

We now know, of course, that Trump has gone much farther. He has spent his lifetime breaking laws👇👇