Q: Can Trump declare a national emergency and then build his wall?

A: Of course not.

The real question is how to deal with Trump's very effective “flood the zone with shit" ploy.👇

Look what happens when Trump says things like that.

2/ Lawyers love to dissect these kinds of questions. Discussing hypotheticals is what we do!

Invariably a reporter will quote a lawyer who says something like: “it’s maybe not totally out of the realm of possibility.”
https://www.nbcnews.com/politics/donald-trump/fact-check-what-s-national-emergency-can-trump-declare-one-n954966 …

3/ “Not totally out of the realm of possibility,” is legalese for “You may as well worry about a lightening bolt.”

Of course he CAN declare a national emergency. Will he get away with using that to build a wall? No.

The law is for REAL national emergencies.

4/ And even then, it doesn't work. Look at Truman's attempt to seize steel during the Korean war.  https://www.law.cornell.edu/supremecourt/text/343/579 …

5/ As an aside, I used to worry Trump would start a war with, say, a nuclear power.

Now I suspect that a war against homeless and unarmed migrants is more his style.

6/ We’re still a long way from courts, the public, and the House getting behind Trump's made-up war against homeless and unarmed migrants.
(Notice I didn't mention the Senate)

Of course Trump will keep trying. So expect more crises and spectacle.

7/ The real problem is that these nonsense claims allow Trump to control the national conversation.

8/ There is a mountain of evidence that Trump & pals committed crimes👇—but instead of talking about THAT, we discuss the legal nuances of military eminent domain and conclude that no, Trump can’t declare an emergency and seize land for a wall.
https://russia-investigation-summary.com/crimes/

9/ We need a strategy so that each time Trump throws out another piece of nonsense we won’t go into a spin.

Trump wants to wear us out.
He wants to keep us from focussing on the real problems: The machine that put him into the White House, and his effective propaganda network.

10/ I’d like to suggest three resolutions for the New Year.

First: Don’t go down the “what if” rabbit hole.

Here's the best example of this.

In 2017, Trump unleashed a firestorm with this tweet⤵️
He sent everyone into a spin when he then suggested he can even pardon himself. 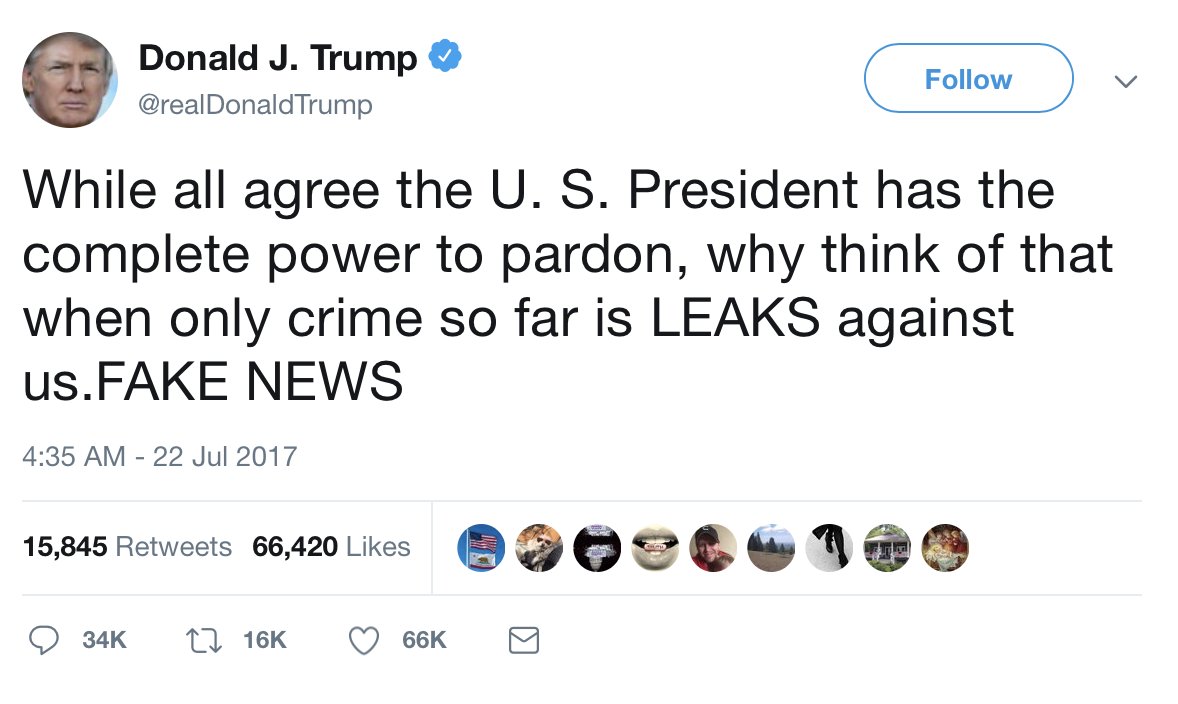 Cynical reason the courts won’t allow it: Why would they give up all their power and make themselves vulnerable to Trump’s tantrums?If he can pardon himself and associates, he becomes a dictator.

12/ He could even send someone to kill a SCOTUS justice and pardon the killer.

As best I can figure it out, the US v. Gamble panic started when an unnamed lawyer told a journalist that Gamble “might” enlarge Trump’s pardon power.

People then added layers of "what if?"

Next thing I knew, someone (not a lawyer) with 3 million followers tweeted this👇

There’s enough real stuff to worry about without going down "what if" rabbit holes.

14/ If you’re in a “what if” rabbit hole, you can’t pay attention to what’s really happening.

That’s why Trump keeps trying to send us into them.

Second: Don’t expect a quick fix. We didn’t get into this mess overnight. Getting out will take work, patience, and time.

15/ Trump isn’t the real problem. Impeaching or indicting him won't dismantle the machine that put him into the White House.

I’m not saying that indictment or impeachment won't or shouldn’t happen.

I’m saying they are not quick fixes.

16/ Third resolution: Keep Trump in perspective. Yes, things have been this bad before.
In fact, things have been worse.
Shall we talk about the trail of tears, slavery, Jim Crow, or the era of robber barons?
Everyone is worried about the Court. Through most of US history . . .

17/ . . . the Court was more "conservative" than now. The Supreme Court gave us Dred Scot, Plessy v. Fergusson, and struck down minimum wage as unconstitutional.

Trump still has better than 40% approval according to 538, the aggregate I most trust.  https://projects.fivethirtyeight.com/trump-approval-ratings/ …

18/ The 40% that still approves of Trump is descended from those who approved the Trail of Tears. We’ve been fighting this same fight for 230+ years.

I agree with this:

We need to educate people about what a right-wing America would really look like.

19/ Some people want to return to 1900. Many more don't—they just don't understand what's at stake.

I’ve noticed that Trump’s approval takes a dip when the conversation is about Manafort or Cohen, their crimes, and their relationship to Trump.

20/ Trump knows how to keep people from talking about that stuff.

That’s what Trump does well: Crisis and spectacle.