(Thread) What's in the Mueller docs?

@ggreenwald wants to know if anyone can answer a few questions, like if Mueller indicted any Americans for crimes in the 2016 election or for criminally conspiring with Russians.

🙋‍♀️I can answer your questions, Glenn!

His mandate was to find “links and/or coordination” between the Russian government and Trump campaign people. See⤵️

Let's keep the goalposts where they belong. OK?

2/ So we are looking in the Mueller docs for “links and/or coordination” between Trump campaign folks and the Russian government.

Papadopoulos, Trump campaign advisor, pleaded guilty to lying about his contacts with Russians during the campaign.  https://assets.documentcloud.org/documents/4776071/a106dd6d-64e2-43c0-9da1-a90a48ed8daa.pdf …

3/ Papadopoulos had a series of communications over a period of months with a “Russian national connected to the Russian Ministry of Foreign Affairs.”

4/ Papadopoulos also learned the Russians had dirt on Hillary Clinton in the form of “thousands of emails.”
He passed that info to the Trump team.
https://assets.documentcloud.org/documents/4776071/a106dd6d-64e2-43c0-9da1-a90a48ed8daa.pdf …
This is sounding a lot like “links and/or coordination” to me.
Wouldn't you agree?

5/ Flynn (Trump’s national security advisor) was instructed by a Trump campaign official to secretly negotiate with Russians in December of 2016 while Obama was still president.
https://www.lawfareblog.com/michael-flynn-plea-agreement-documents …
🤔It seems to me that would indicate more links and coordination.

6/ Richard Pinedo, an American, pleaded guilty to stealing the identities of Americans and selling hundreds of bank accounts to Russia to help them infiltrate the American electorate.
https://www.lawfareblog.com/document-richard-pinedo-plea-agreement-criminal-information-and-statement-offense …
There. An American pleaded guilty to a crime in 2016. With Russians.

8/ 13 Russians and 3 Russian companies were indicted for a massive and well organized campaign to interfere with the US election.

An “unnamed political” activist and person associated with a “grassroots” Texas-based organization knowingly helped them.
https://www.justice.gov/file/1035477/download …

A few interesting facts from the Netyksho indictment:

10/ “A person who was in regular contact with senior members” of the Trump campaign began communicating with Gucifer 2.0”

Here’s the oddest one: The Russian hacker received and responded to a request for documents from a candidate for US Congressman.
https://www.justice.gov/file/1080281/download …

11/ Gates, in his guilty plea, admitted to defrauding the US and committing crimes through 2017 — while Gates helped lead the Trump campaign and transition.  https://www.lawfareblog.com/documents-gates-superseding-criminal-information-statement-offense-plea-agreement …
There you go. More crimes. By Americans. In 2016.

13/ Michael Cohen also committed a campaign finance violation in 2016 at Trump’s direction.  https://www.lawfareblog.com/document-michael-cohen-plea-agreement …
The “at Trump’s direction” was offered under oath in court. But it was still a serious crime.
And it had to do with the 2016 election.
Satisfied yet?

14/ If not, that's okay. There's more we don't know about.
This is what an addendum to Flynn’s sentencing memo looks like⤵️

Perhaps you're confused, Glenn, because there are so many “links and/or coordination” that it’s hard to keep track of them all. 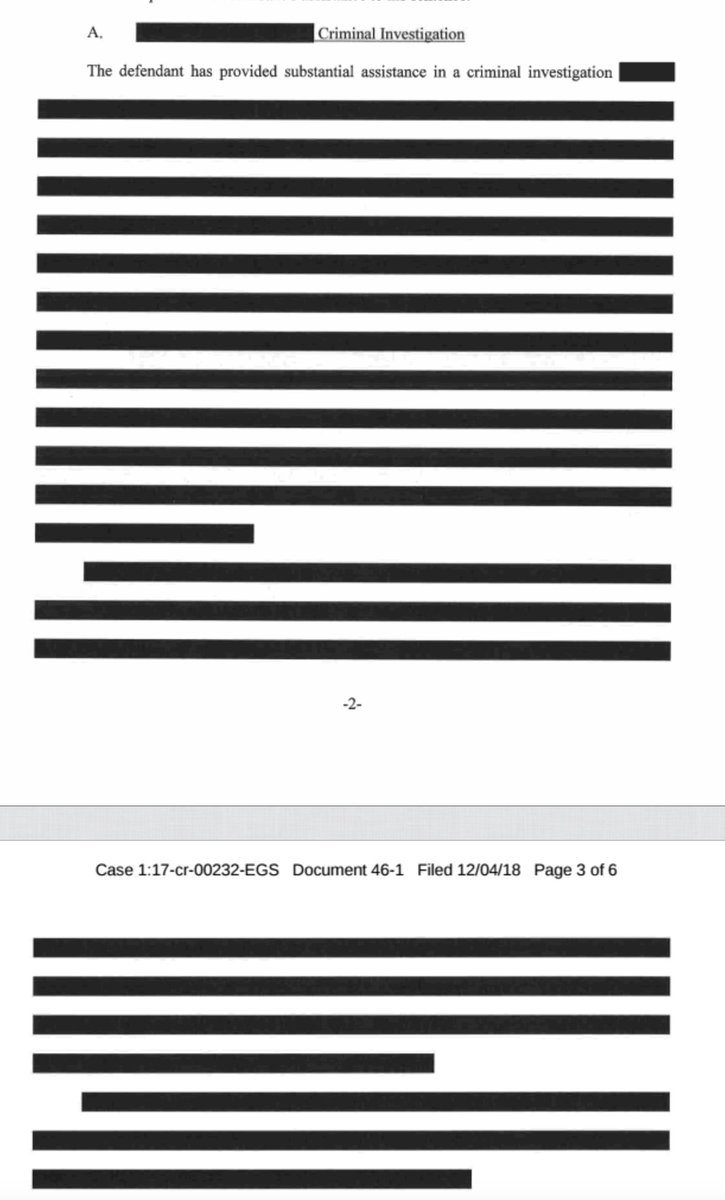 14/ It’s definitely easier to focus on a single lie (“her emails!) than genuine crimes — particularly when they're too complex for Fox News sound bites.

15/ You see, the question isn’t: “Did any top Trump officials have links to Russia?”

The question is: “Did any Trump officials did NOT have links to Russia?”

If you wonder how I came up with all of this so quickly, I've been keeping track here⤵️
https://russia-investigation-summary.com

All of my threads are now blog posts. You can view this one here:  https://terikanefield-blog.com/whats-in-the-mueller-docs/ …
If you haven't visited my blog, the threads are even categorized. (I feel like an Internet Whiz.)