Yesterday, Special Counsel filed a memo with the court describing Manafort’s lies (for the purpose of showing that Manafort violated his plea agreement).

A lot of the memo looks like this👇 But we learn a few new details. 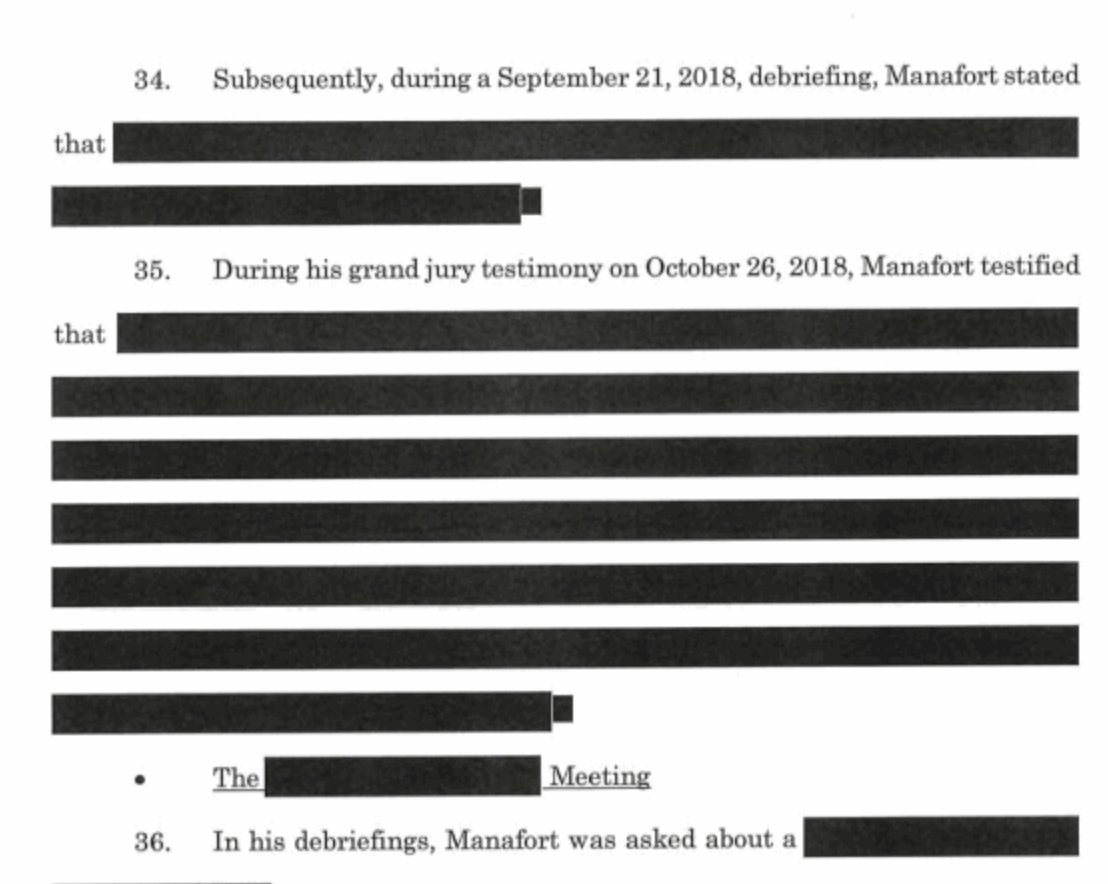 1/ I’ll work the new stuff into what we already know to give a big picture.

(All info taken from the Mueller docs)

Manafort was an unregistered agent of the Ukranian Party of Regions (the pro-Putin party) between at least 2006 and 2015.

The “at least” part is important.

2/ During the 2016 campaign, Manafort shared polling data with Kilimnik.

From the Alex Van der Zwaan docs we learn that Kilimnik (person A) has “ties to Russian intelligence service.”

3/ Between Feb-April, 2018, Manafort and Kilimnik engaged in some witness tampering:

They reached out directly to Persons D1 and D2 and pressured them to lie.

4/ Here we find out that the lies were intended to hide the fact that Manafort was an unregistered foreign agent. Oops.

I believe this statement is accurate:

Manafort is an agent of the Pro-Putin Party of Regions. Therefore: Manafort works for Putin. 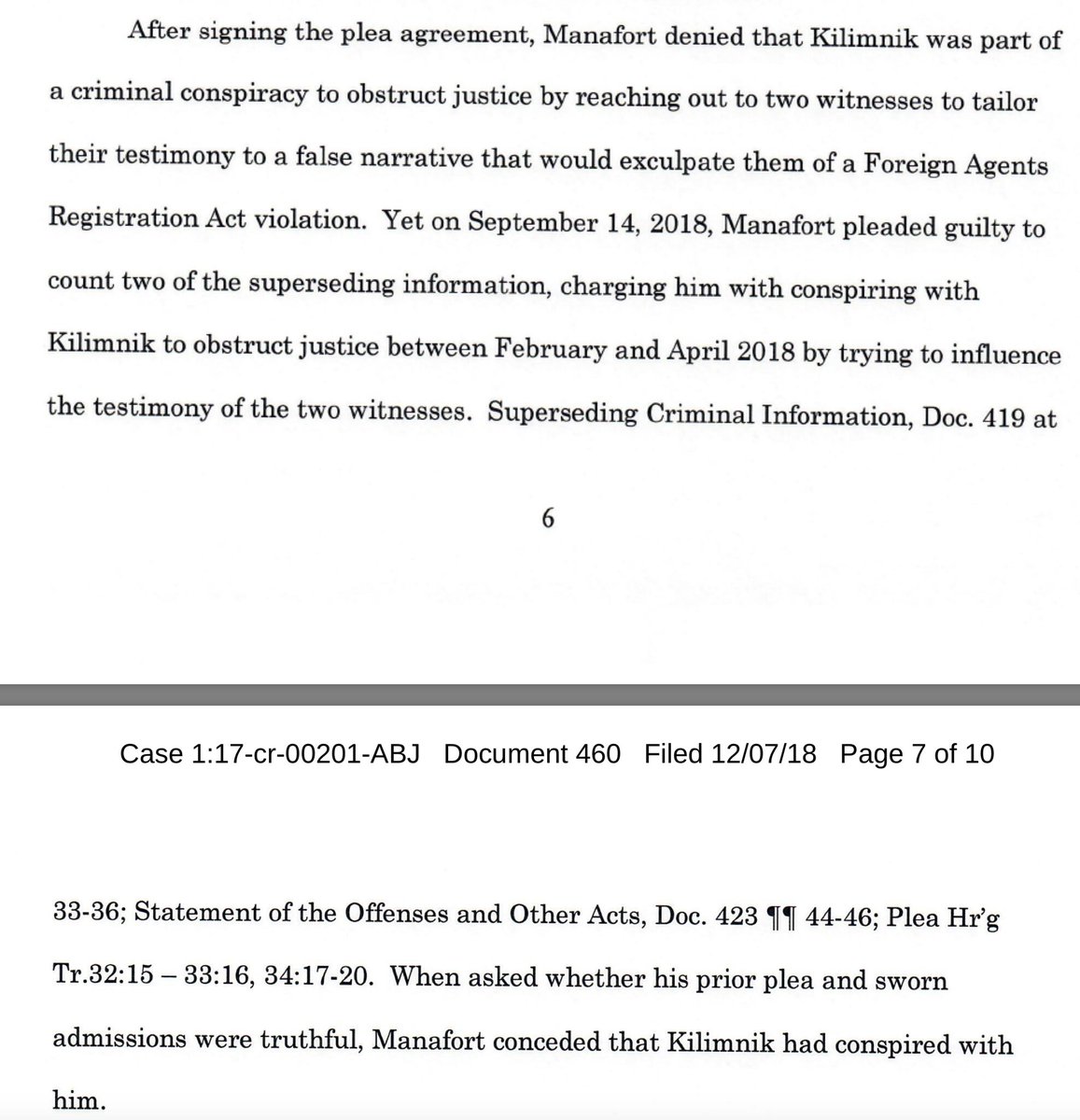 5/ Moreover, Manafort continued working for Putin through the campaign.

On Oct. 16, 2018, Manafort was still lying about Kilimnik’s involvement in the witness tampering👇

Now we come to the Ukranian Peace Plan. First, some background from outside the documents. 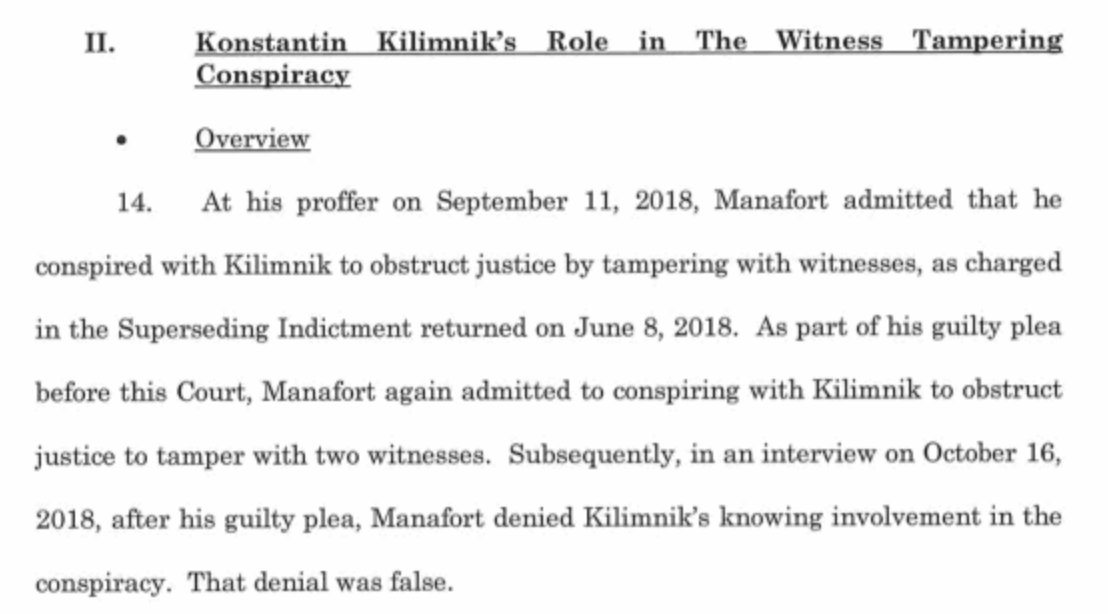 6/ In 2017 the NYT reported that Flynn, as National Security Advisor, received a Ukranian peace plan proposal from Cohen, which was put together by a Ukranian lawmaker who reportedly “received encouragement” from Putin operatives.
https://www.nytimes.com/2017/02/19/us/politics/donald-trump-ukraine-russia.html …

7/ From a faulty redaction, we learn that Manafort and Kilimnik discussed a “Peace Plan.”

Manafort then lied about it.
It's hard to deny Manafort was a pro-Putin agent during the campaign. Right?

There are two highlights here. You have to click to open it all the way👇 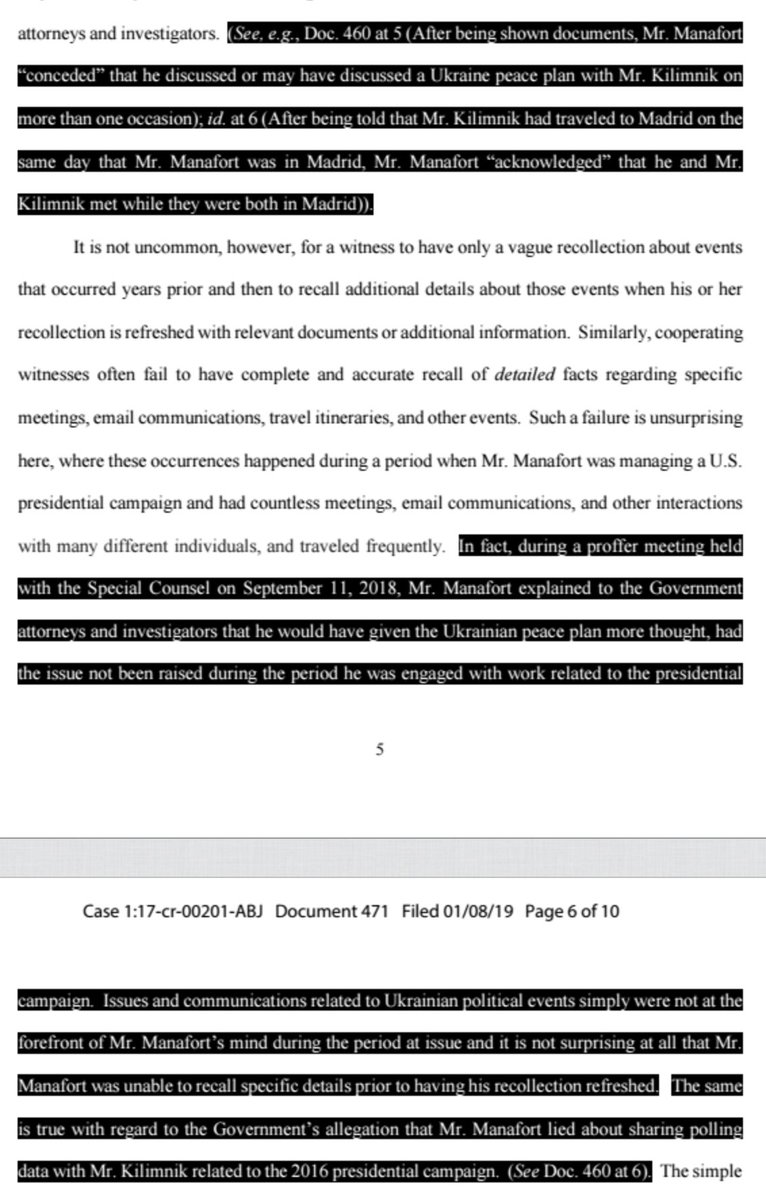 8/ Now we come to Manafort’s financial crimes. Discussing them all would fill a book, so I'll just hit the important point.

Between 2006 and 2017 (thus, while heading the Trump campaign) Manafort and Gates were hiding money.

They got the $$ “as a result of their Ukraine” work.

9/ Here's the screenshot about millions coming from Ukraine work.

Pause to consider where that $60 million came from.

(I have two attachments on this tweet, a link and screenshot) 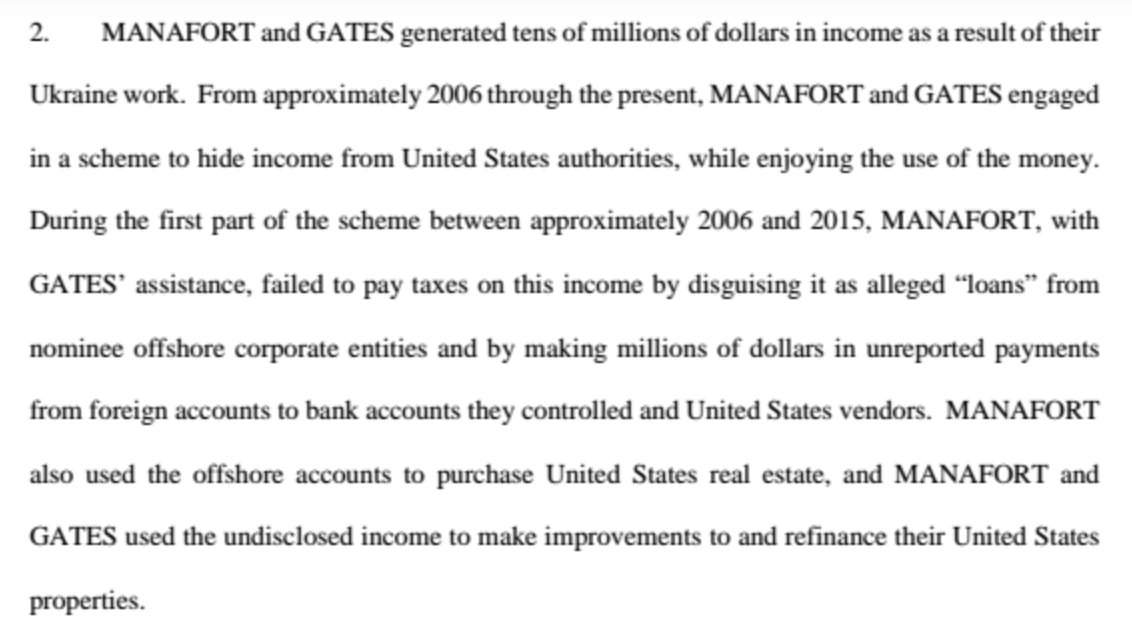 10/ After Manafort was outed as a foreign agent working on Russian interests, what happened?

In the 1-16-2019 doc, we learn that Manafort was using intermediaries to get people appointed to the Trump administration.

Manafort neglected to tell OSC about “other additional contacts” with the Trump administration.

12/ So a Trump "official" and Manafort are hiding their communication.

On May 26, 2018, someone texted Manafort and asked if he
could “remind” Trump of our relationship. Manafort said yes. 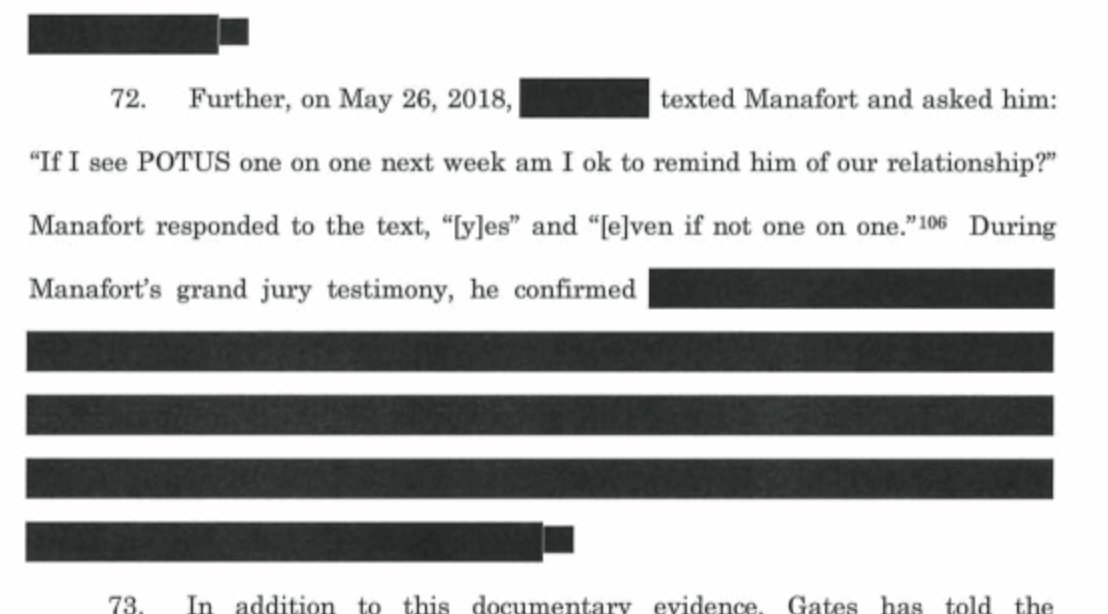 The similarities are not surprising, of course, given the fact that Pro-Russian Ukranian operatives (Gates and Manafort) were managing Trump’s campaign.

14/ As part Gates’ work on behalf the Party of Regions, he commissioned a report by an American law firm about the jailing of Yulia T. He disseminated it in the US.

From outside the docs: The chant “lock her up” was first used against Yulia T., who was jailed on made-up charges.

15/ Van der Zwaan spoke to both Kilimnik and Gates about the report. Remember much is redacted. But Mueller thinks that report is important.

Another thing that's interesting: Manafort’s financial crimes within the U.S. mirror the corrupt behavior of the Russian oligarchs.

16/ Manafort was found guilty of tax fraud and bank fraud. And he hid his dirty money.
https://www.cnn.com/2018/08/21/politics/paul-manafort-trial-jury/index.html …

Basically, Manafort and Trump both got rich the same way the Russian oligarchs got rich. What do I mean? . . . (see next tweet)

17/ They never added or produced anything of value. They worked for oligarchs, who took control of things that didn’t belong to them. Thievery money.

I think there are two ways to understand what is happening.

18/ First, the intention is to make the U.S. like Russia—ruled by oligarchs who get wealthy at the expense of the people. Be wary of the word "privatize"

Second, Manafort and Trump are part of a larger criminal enterprise. And neither are at the top.

19/ In a lecture Mueller delivered on 1-27-2011 (he was FBI director) he talked about a new kind of organized crime threatening the US. Today’s mobsters have gone international.  https://archives.fbi.gov/archives/news/speeches/the-evolving-organized-crime-threat …

21/ Sometimes people ask: Is everyone involved in the coverup going to jail? I don't think Mueller is going for all the extremely small fries. (Maybe medium fries)
I think he wants to topple the organization that worked to put Trump into the White House.

22/ Why isn’t this sinking into the public consciousness?

Because Trump is using the Russian strategy of creating a constant barrage of crisis and spectacle so that nobody can focus.

Flood the zone! Keep everyone spinning with outrage!

22/ Trump believes (as per @maggieNYT) that the Court of Public Opinion is the place where his fate will be decided.

That’s why he has no real legal strategy or defense. He's not preparing for a court battle. He doesn't think he's going there . . .

23/ . . . even if he has to burn the courthouse down before anyone can get him inside.

His focus is to hold onto his 40% approval.

[I get my numbers from the 538 aggregate, which is more reliable than individual polls. It’s also less swingy.  https://projects.fivethirtyeight.com/trump-approval-ratings/ … ]

All my threads are now blog posts. You can view this one here:  https://terikanefield-blog.com/why-manaforts-crimes-matter/ …