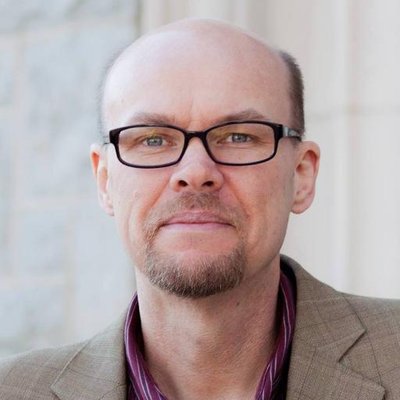 For those who aren’t quite sure why these media layoffs keep happening, or think “it’s the internet!” or “people don’t pay to subscribe,” there’s a lot more going on. Though that is part of that. Here’s a cliffs notes version - not exhaustive but it hits the highlights:

1. What is considered The Golden Age of Newspapers ended around the late ‘80s. Subscriptions began dropping in the ‘70s year over year, but not enough to show cracks.

Newspapers spent most of the 20th century consolidating into chains, but in the latter half of the century they became part of conglomerates and were publicly traded. Profit margins for companies like Gannett and Knight Ridder were commonly around 30-40%.

That’s an insane margin. For comparison, your local supermarket (which arguably is more necessary for you to live) is lucky to clear in the low single digits. Anyhow, most of those profits went to shareholders, who came to expect them over time.

Because of that, newspapers became, as the joke goes, a license to print money. So chains started gobbling up papers all over the country in the ‘80s and ‘90s. They took on debt to do this because with 40% margins, there wasn’t much downside in that model.

Then the Internet came along and the bill for shortsighted, quarter-to-quarter thinking came due. During the golden era, newsrooms didn’t invest in innovating their news product very much. They invested in technology to make it easier and require less hands.

So they were caught flat-footed. But not immediately. I remember as a college student in the ‘90s attending a journalism conference and hearing publishers boast that newspapers were here to stay. They believed their product (not the news, the physical object) was essential.

So by the mid-‘90s you had chains saddled with MASSIVE debt and already had readership shrinking year over year. Easy self-publishing on the Internet took a bit to come to fruition and required technical skill. Blogger was invented in the late ‘90s and that was your sea change.

Suddenly, publishers who weren’t used to competition and didn’t invest in innovation were competing with more than their crosstown newspaper rival (if they had one anymore …. consolidations and mergers killed those too).

Circulation levels continue to drop, and the trend accelerated in the early part of last decade. With less readership and huge debt service commitments, it became a vicious spiral that required more cuts to meet debt goals and satisfy shareholders who were used to big profits.

And less quality meant less people found value in the product, and so they subscribed less. This is what Phil Meyer famously called the Death Spiral. Newspapers ate their own seed corn during bumper crop days and then had no resources when it got tough.

Less subscribers didn’t just mean less subscription money. By early 2000 about 75-80% of a typical newspaper’s revenue came from display and classified ads. And while subscriptions only account for 10-15% of revenue, a loss of subscribers mean less ad revenue.

And then came free classified ads on Craigislist (among others). People have said Craig Newmark killed newspapers, but that is nonsense. I’m surprised it took people that long to invent free classifieds, tbh. SOMEBODY was going to do it. At least Newmark cares about news.

Classified ads were a damn boondoggle. $500 in a mid-metro to place a car ad. The more expensive your item, the more you got charged. No wonder people rebelled the minute they were offered the ability to do it for free. Newmark didn’t kill classifieds; news publisher greed did.

Anyhow, by 2006 the storms were gathered. Readership dropping, which meant less subscription/sale revenue and less display ads, classified ads as a business was decimated. And all the while, that debt service from the buying spree years was hanging like the Sword of Damocles.

This is a great illustration of it. I call it the Oh My God graphic in my intro course. 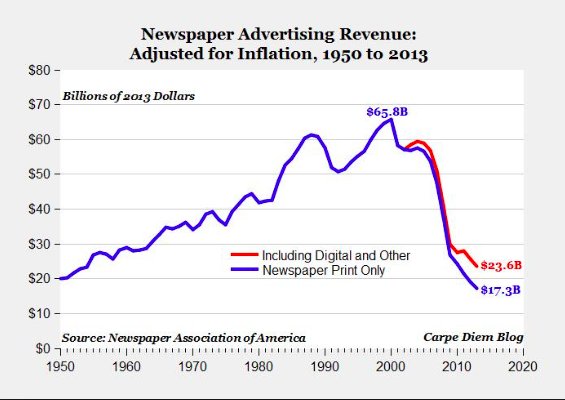 But advertisers weren’t spending less. They were redirecting it. The hope was they’d invest in digital, specifically newspaper websites. And while that did happen to some extent, the numbers never came close to matching display ads because how we get news online is way different.

First, social media changed distribution. A print newspaper controlled content and the way you got that content because it controlled distribution. You were basically paying it to point you to the best news. If that sounds familiar, that’s because it’s what Google and FB do now.

The value proposition for advertisers is in showing you the way. Consumers value curators. The newspaper was curatorial, it’s just we didn’t realize it because they had a monopoly on the content process from end to end.

So let’s go back to Oh My God, with revisions. 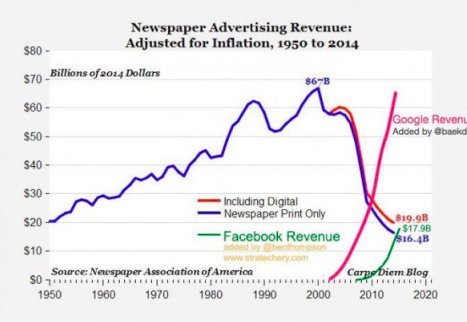 There is money out there. Google and FB have something print newspapers used to have: a reliable, captive audience. That’s what advertisers will pay for, because they know people will be there.

Since the middle part of last decade, newspapers and media companies in general have been accelerated their investment in innovation. There are some GOOD, profitable examples of new companies doing this well. What they have is no debt service millstone tied around their neck.

Some of the big players like WaPo and NYT, they have experimented with innovative products and also paywalls with some success. I think long term their brand and reach are big enough they’ll be OK.

Yesterday it was Gannett, HuffPo and BuzzFeed announcing layoffs. The latter two were a surprise, but those are digital-first companies that probably have some way through this. The real worry is Gannett.

Here’s what Gannett owns, according to CJR’s excellent Who Owns What database.  http://bit.ly/2Tf6xr2

They own newspapers big and small all over the country. This is the real crisis right here. Most of those small newsrooms have already been cut to the bone repeatedly the past 20 years. We’re way beyond trimming fat. This is a stab to the heart of democratic accountability.

And the crux of this thread is that’s the real worry. I’m less concerned about the national players or a lot of the digital-first operations. We are on the cusp of a country full of news deserts, medium and small communities with no newspaper to watch those in power.

And it’s not going to be solved by subscriptions alone, although that can help in big ways. The news model needs to be completely reinvented. Paywalls don’t work for local media, as @bpmoritz has noted.  http://bit.ly/2TdZuyK

And who’s moving in right now to pick through the scraps? Hedge funds. They’ve destroyed several papers, and are working their way through some biggies like the Denver Post.

When hedge funds are in the game, you’re being stripped for parts to sell off. They have no interest in growing the paper or finding a sustainable model. That’s not what they exist for.

And there’s a demographic bomb out there waiting to go off. The print product is still bringing in large amounts of revenue relative to digital. And guess who reads the print version? Old people (by and large).

But this isn’t something that perpetuates. That is, as people like me age up, our likelihood of subscribing to print doesn’t go up. For each successive generation, it’s diminishing returns. So to put it crassly, what happens when that generation of loyal subscribers dies?

And so there’s a limited window before that bomb goes off. But in truth? A healthy product likely would have solved some of this by now. I am resigned to the fear that existing small/medium newspapers are out of time and are simply playing out the string.

So, all that said, what can you do? First, we need to realize the greedy publishers that didn’t invest aren’t going to realize their mistake and plow money into the business now. So guess who needs to step up? US. If we value accountable democracy, that is.

Subscriptions, yes, but look for opportunities to support things like foundation journalism (what ProPublica is doing, for example) and moonshot ideas like what Civil tried to do.

As community members and citizens, we need to look at investments as things that might fail but also might succeed, as investments often do. But we need to invest for the sake of our communities and our democracy.

What I’d implore you to do, though, is look for ways to invest in local news because that is where it matters most. Good god, you think Washington is corrupt? Try City Hall. Some of the worst stuff I saw as a reporter happened there.

Your local paper might be toast or dying. So who’s stepping up, needs help creating a new way to do local/regional accountability. I’m seeing more of these than I used to. @RalstonReports is one example. Some of these are laid-off reporters that go-it alone. They’re good at this.

The people in industry, those still there and even those getting laid off, are trying like hell. They really are. But it’s not their fault. It’s not their bias, or mistakes, or them being bad. The seeds were planted decades ago by greedy, short-sighted owners. <END>

(Apologies for posting all those … thread got out of order and I deleted/reposted so it actually makes a bit more sense!)

Some of you asked for examples of good stuff, models that are working or are promising. I’d point you to a few:

On the heels of the layoffs news last week, I did an interview yesterday with @kcrw’s “Press Play” program about the local news crisis in the United States.  https://kcrw.co/2B5qGIS

If you want something that expands on this thread about newsroom cuts, I wrote this for @Slate.  https://slate.com/technology/2019/01/layoffs-at-media-organizations-the-roots-of-this-crisis-go-back-decades.html … (with huge thanks to @Lollardfish for the advice and encouragement).

Just throwing up a general apology to those who have replied and asked questions that went unanswered. I’m not ignoring you, it’s just I haven’t seen it among 2500+ mentions. My email backlog, I’ll get to that tomorrow.

This has been fascinating to watch. I teach my students that this is how social news spread/virality works conceptually but this is my first real personal experience at a big level. Went from 3K to 12K followers in three days. Should apologize now for how boring I am for real. 😂

p.s. I do know the difference between "less" and "fewer" but I was writing on the fly. But all you grammar nerds who COULD. NOT. RESIST. saying something ... I see you and I love you. I'd give you a hug but, come on, we're journalists. We don't hug.

Should've tacked this on to the thread yesterday, but I am Bad At This. The Slate piece above sketches out the thread argument, but this I wrote for @WIRED dives in how newspapers bungled their own business model, lost their community + how to get it back.  https://www.wired.com/story/medias-fatal-flaw-ignoring-the-mistakes-of-newspapers/ …