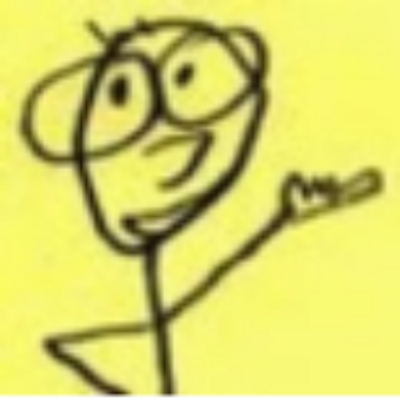 [1/23] A quick thread on #OpenSourceSocialMedia inspired by Molly’s tweet.

There’s more out there than you might think. Try something new, come join us! We have cookies. 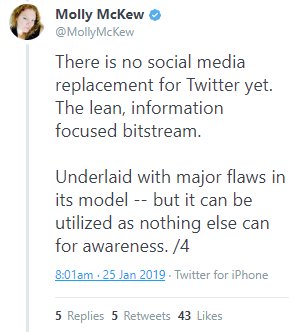 [3/23] And you don’t need to wear a ‘Digital Hairshirt’; think of the early days of the internet when it was just you and your pals. That’s where Open Source Social Media is at now. Millions are using it, but mostly 'early adopters.'  http://www.jweeks.net/welcome-to-open-source-social-media …

[6/23] I am trying out #OpenSourceSocialMedia and I'm enjoying it so far. There are TWO setbacks:

If you want to see what’s going on in government, newsrooms, celebrities, public figures? That’s simply where they 𝘢𝘳𝘦.

Setback One: (continued) Insta/Twitter/FB/YT know this, they love to be viewed as utilities, which is why David Duke / Richard Spencer haven’t been kicked off.

It makes them 𝘮𝘰𝘯𝘦𝘺 to get rage clicks; cements them as central discussion point.

[8/23] Setback Two: Insta/Twitter/FB/YT have billions to develop smartphone apps.
These are in shorter supply for Open Source social networks.

(Changing; there are some good apps for Mastodon, thankfully. I use TootDon for #Mastodon, the Open Source Twitter clone.) 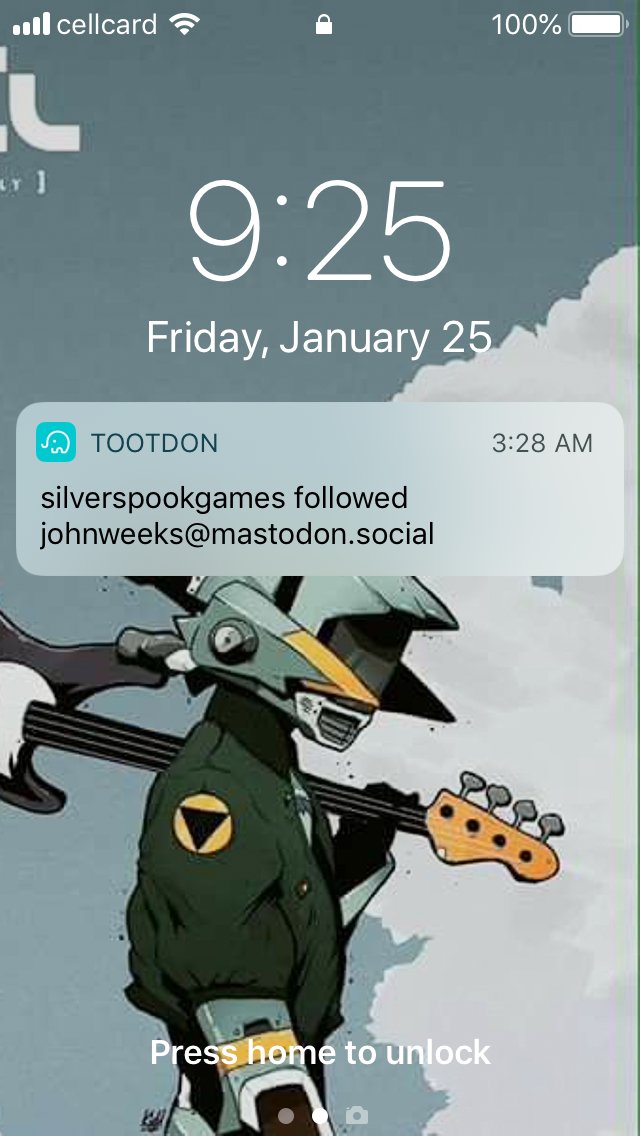 [9/23] (There is a small third setback: Open Source Social Media hosting is not at one central corporate site, it’s on MANY servers (‘instances’) & you choose what’s right for YOU. That’s a good but does affect initial uptake. Choice can 𝘪𝘯𝘵𝘪𝘮𝘪𝘥𝘢𝘵𝘦 people sometimes.) 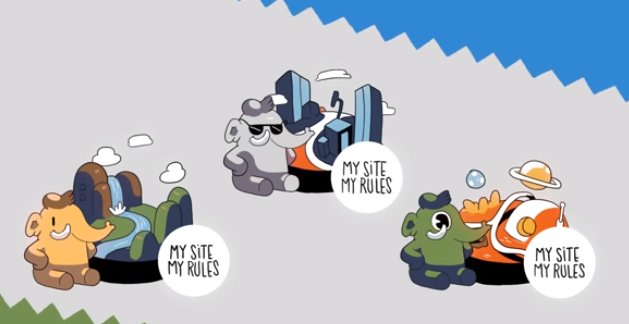 [10/23] Let’s see check out some alternatives. #Mastodon is analogous to Twitter, and it’s got good mobile apps.

[11/23] #Mastodon (continued) It’s not Twitter and doesn’t intend to be.
You can preview text/images with ‘content warnings’
Founder Eugen did not want to facilitate corporate interjections so there is no text search. The central instance maintains a robust blocklist. 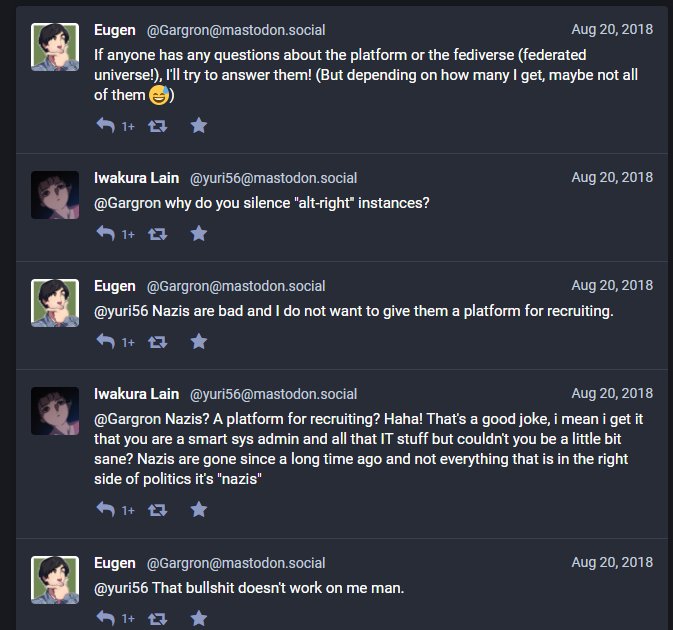 [12/23] #Mastodon: (cont.) All #OpenSourceSocialMedia is citizen moderated. Suppose you want to run an alt-right server? You can, BUT

Central servers (‘instances’) will block you & your hate can be TRACKED to server/host, unlike Twitter, FB, Insta, YT.  https://theoutline.com/post/2689/mastodon-makes-the-internet-feel-like-home-again?zd=2&zi=pkfnergv …

[13/23] Mastodon: (continued) here are some Masto tips and tricks.
Also: Masto has the best apps so far of all OpenSourceSocialMedia.
http://www.jweeks.net/mastodon-articles-tips-and-tricks … 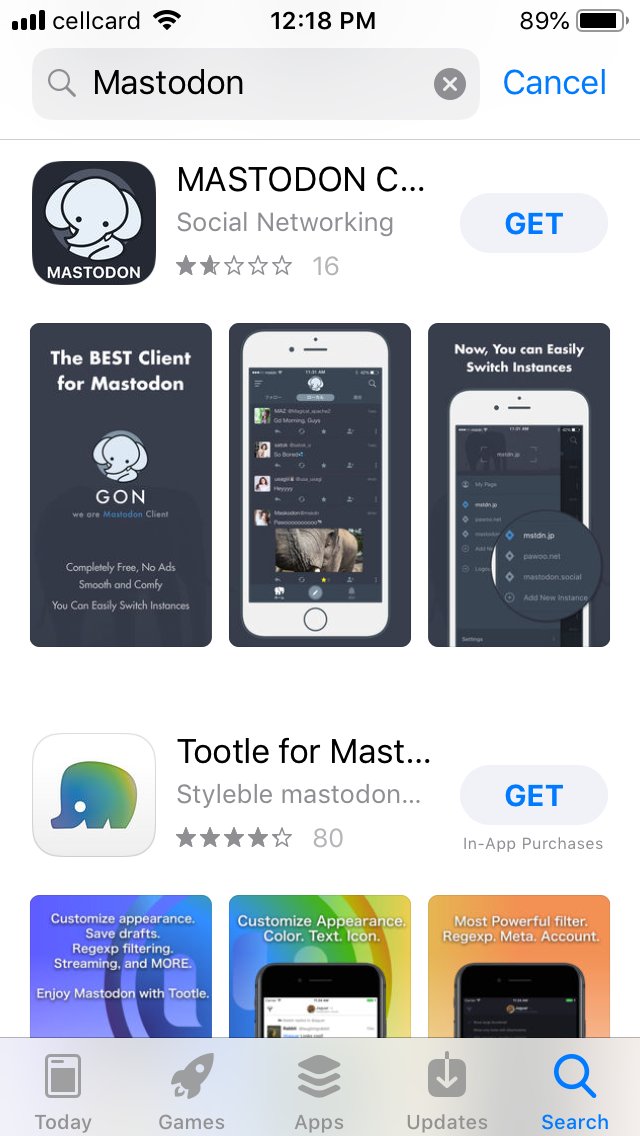 [14/23] #PeerTube is an Open Source YouTube clone. Many people dual-post at YT and PT.  https://www.youtube.com/watch?v=PJIsiuSdpq8 …

[15/23] Yes, #PeerTube is slower than YouTube, but it doesn’t have YT’s algorithm suggesting ‘Manosphere’ videos to teenagers.
https://www.salon.com/2018/09/18/how-youtube-became-a-powerful-far-right-propaganda-organ/ …  https://melmagazine.com/en-us/story/youtube-red-pill-men-right-wing-hate-radicalization … 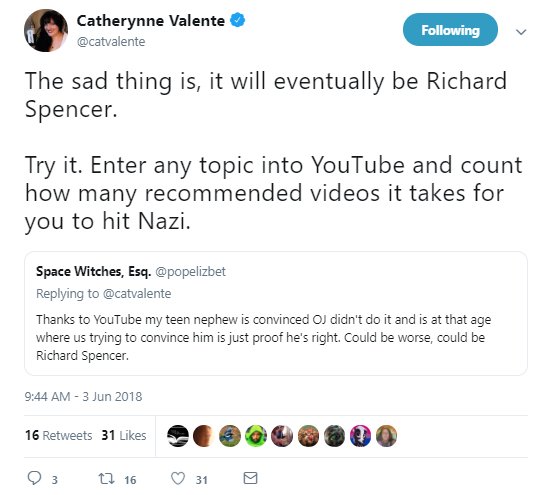 [16/23] #Pixelfed is analogous to Instagram. People love Instagram, and are slaves to the app. Pixelfed is relatively new, has similar functionality to Insta on the web. And they are developing a ‘stories’ feature like Insta has.  https://pixelfed.social/ 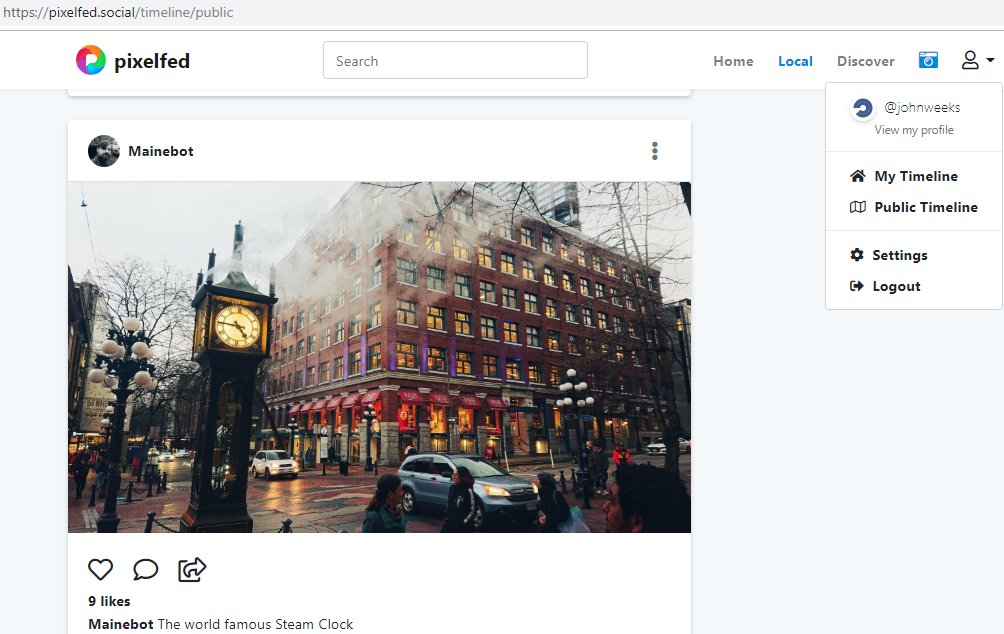 [17/23] Many attempted Facebook clones. I’m using #Friendica, a spinoff of #Diaspora. There are MANY FB attempts, and I’m keen on ones using ‘ActivityPub’ for interoperability. You can follow, like and repost between FB/YT/Twitter/Insta clones. 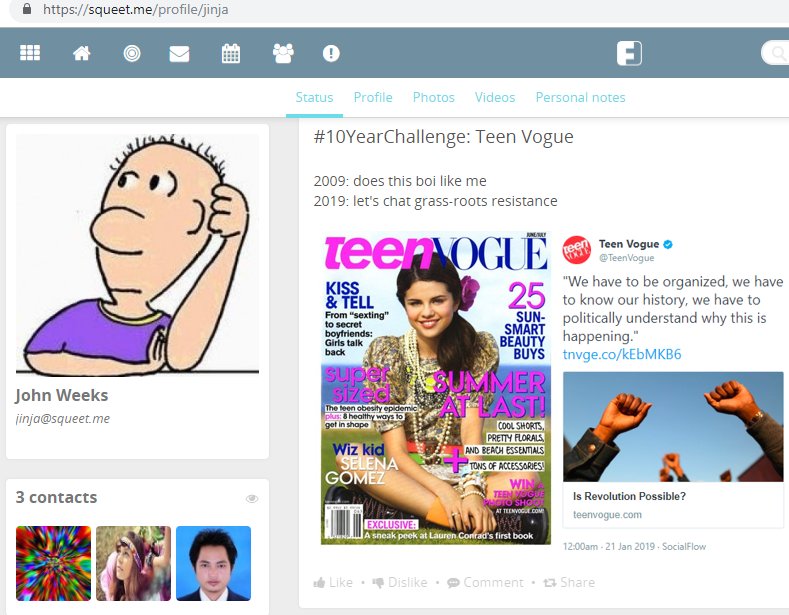 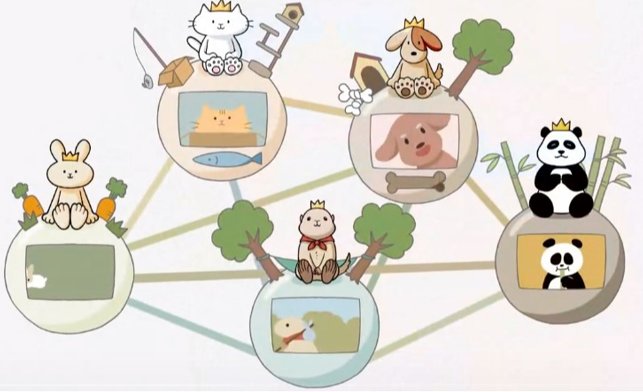 [19/23] Another particularly cool feature being developed: ‘Nomadic Identity’. Don’t like where you are hosted? You can TAKE your posts, up and leave. You can export them to a new server.  https://medium.com/@tamanning/nomadic-identity-brought-to-you-by-hubzilla-67eadce13c3b … 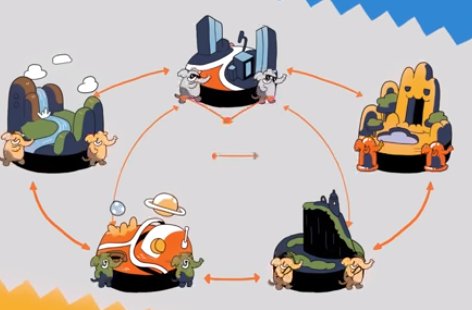 [20/23] For me the issue with FB/Twitter/YT/Insta is primarily a moral one. I don’t want to be monetized, be the product. And I’m uncomfortable with any platform that hosts hate. 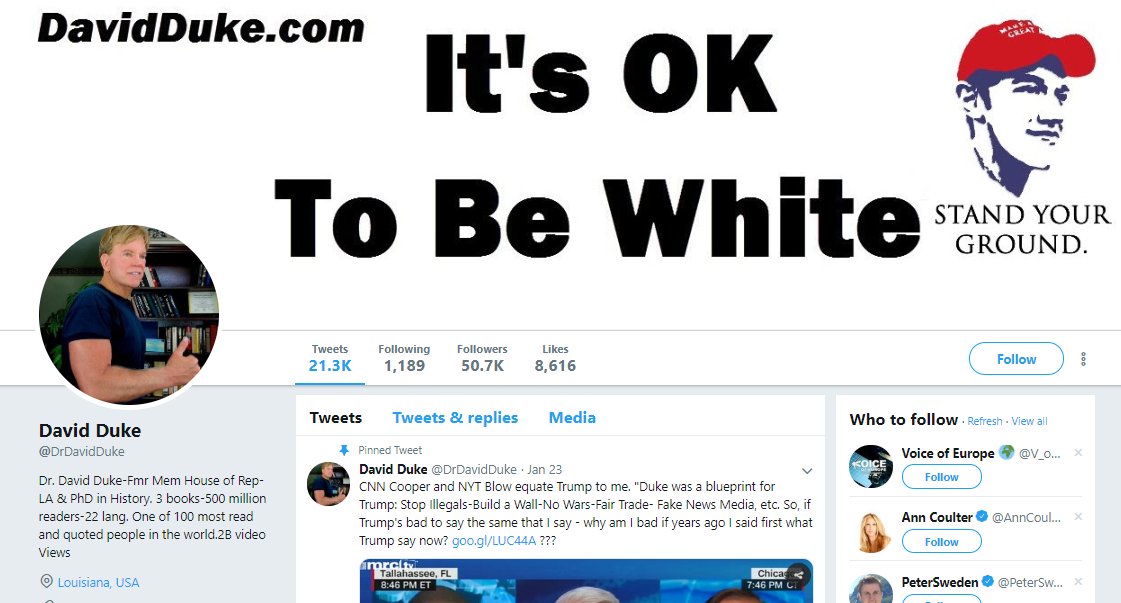 What new networks/apps will there be 10 years from now? Don’t hesitate to explore.

[22/23] I would like to encourage people who carefully choose where they shop, eat and work based on ethical reasons: maybe this should extend to your social media use, too! 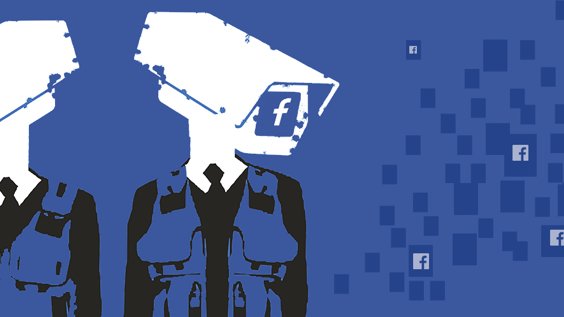 [23/23] I get it; nothing in this world is pure, we’re all compromised. But let’s think think aspirationally. #OpenSourceSocialMedia, is there, if you want to use it.

Also: it's fun to explore. 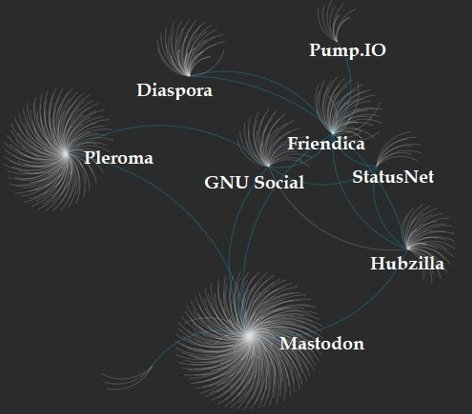 [Xtra/01] BTW This was cross-posted on @MastodonProject; note that it automatically threads it as a separate, stand-alone HTML page.