Utah man, 27, threatened mass shooting because he was a virgin and had never dated

Pennsylvania man, 21, fatally shot 3 men and injured an ex-girlfriend before shooting himself.

California man, 48, ambushed and fatally shot a woman officer as she adjudicated a traffic accident.

Pennsylvania man, 27, bludgeoned, stabbed and shot a woman who broke up with him.

Florida man, 60, fatally shot ex-girlfriend and shot her friend, saying he was trying to “get rid of the Devil”

Oregon man, 36, fatally shot a woman on a first date after meeting online

Florida man, 39, shot his wife and her parents after accusations of of adultery

Louisiana man, 26, shot and killed his girlfriend, a police officer, while she was preparing to leave for work

Alabama man, 19, shot a woman he was simultaneously assaulting while driving.

Four women shot at a Newark candlelight vigil for teen car crash victims. No arrests made.

Ohio woman fatally shot while walking dog. Her body was found by a woman shot in the head a few months prior.

Two Louisiana women were fatally shot near an apartment complex. No suspects arrested

North Carolina police found a woman shot to death after responding to a domestic violence call. A suspect is in custody

A New York woman was shot on a Buffalo metro bus. No suspects arrested

Gun violence is a women’s issue: An American woman is fatally shot by a current or former intimate partner every 16 hours; most mass shootings involve domestic violence; American women are 11X more likely to be murdered with a firearm than women in any other developed nation. 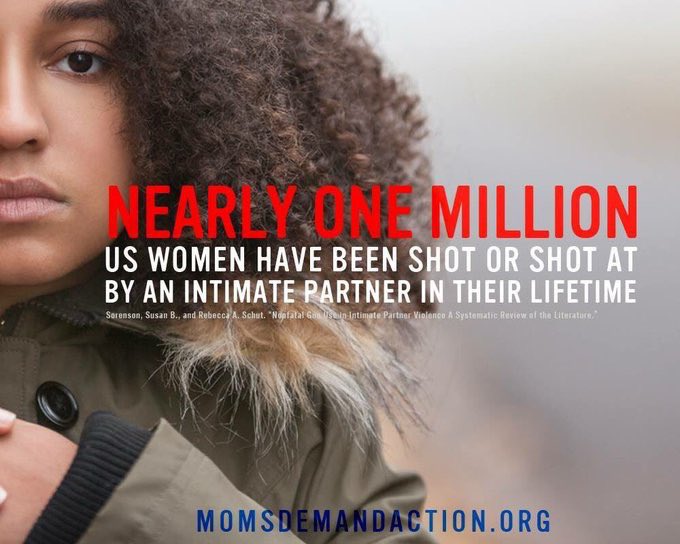