…
Reckoner, the same thing happened in California. During the years it took to correct the situation, people were frustrated.

The point of this story is to keep our current situation in perspective and tamp down panic.

1/California used to be Republican. We gave the country Nixon & Reagan.

He stoked fears of immigrants, running dark ads with scary people coming over the border, playing on fears that had been building in certain communities.

When I saw Trump’s ads, I thought of Wilson and wondered if what happened to CA in the 1990s was about to play out nationally.

Liberals were horrified by Pete Wilson’s scare tactics, and by the idea that . . .

3/ . . . our friends and neighbors with Mexican heritage were a threat to California’s security.


Those with Mexican heritage in CA were mostly Catholic, religious, committed to family, and naturally aligned with true conservatives.

Wilson’s signature law was the anti-immigrant Prop 187 ("Save our State”).

The state's liberals and minority communities denounced 187 as cruel and bigoted.

5/ The wheels of justice turn slowly (well, that’s true in our system, with lots of due process safeguards).

6/ Shocked into action, liberals and minority communities organized.
An energized Democratic base pushed CA blue faster.
By the early 2000, most CA voters were Democrats.

I then had a private appellate practice representing indigents appealing from averse rulings. I was appointed by the courts and paid through the state general budget. There were many times during the fiasco. . .

8/ . . . that my checks were delayed for months, something like the GOP’s national government shutdown.

It took a while, but eventually the will of the majority gained control.

Seems to me that states like Texas and Florida should be next. The key: Not becoming complacent. There is a lot of work to be done.

There are, however, no quick and easy fixes. 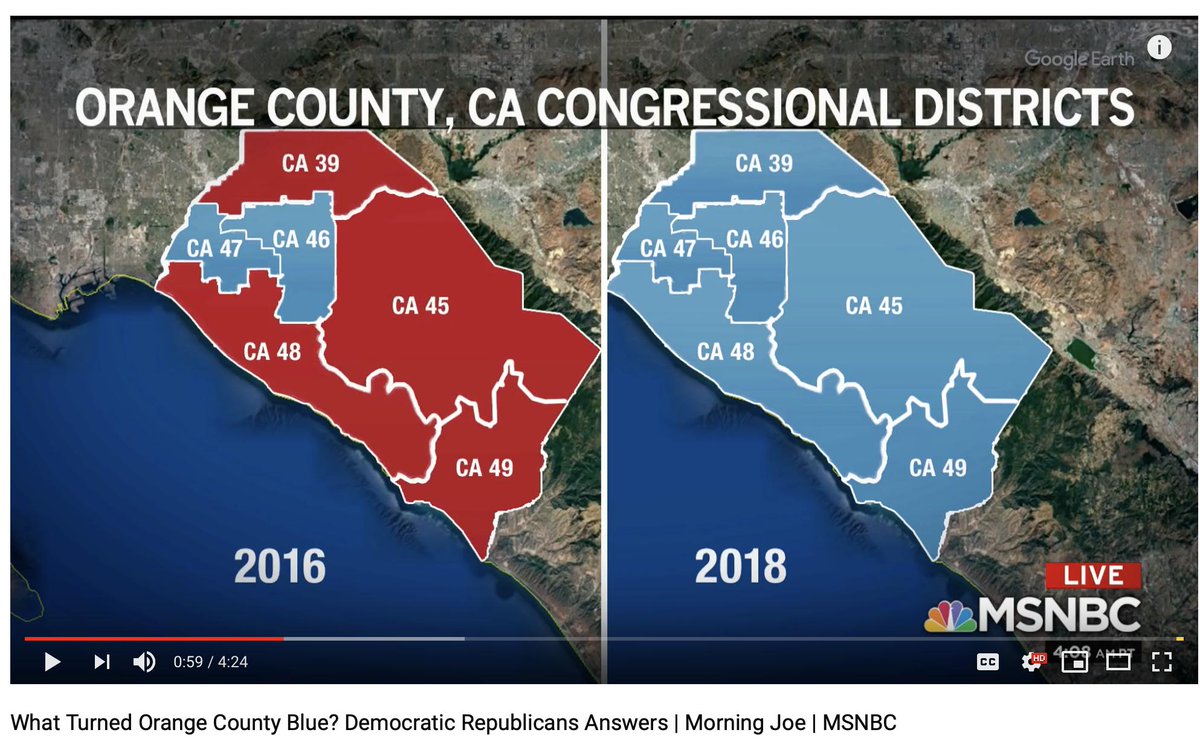 10/ People call for indictments as if they're a magic solution. They're not. Indictments are merely the start of lengthy legal proceedings. We have a presumption of innocence. As the holdout juror in Manafort’s case proves, trials are chancy.

Impeachment is similarly the start of a process. We’ve had 2 impeachments in our history, but no president has ever been removed by this process.

12/ As things stand, I can assure you that if the House impeached tomorrow, the Senate would acquit, and Trump would feel empowered by the victory.

Impeaching now without a plan for what to do after the Senate acquits would not be responsible.

13/ I can imagine evidence coming out of the current investigations that would force the GOP to remove. So far, nothing has budged them.
I think this is what Pelosi meant by “unless" ⤵️

14/ The drafters of the constitution deliberately made it hard to remove a president. Rule of Law means working within our constitution, even if it’s not giving us the results we want.

15/ My favorite fantasy is that both Pence and Trump are removed and Pelosi becomes president. I understand it’s fantasy.

Can we get out of this mess and turn the country around? Yes.
Will it take patience and hard work? Yes.

Impeachment = indictment.
Indictment requires a majority in the House.
The trial happens in the Senate.
Removal requires a finding of guilt with 2/3 Senate majority.

If Trump is impeached & the Senate acquits, he comes out with a finding of "not guilty."

I am not saying not to impeach. I can think of reasons to impeach anyway.
But it would be silly to keep impeaching each time new evidence comes out, so there is a good reason to wait until the investigations are complete.

All of my threads are now blog posts. You can view this one here:  https://terikanefield-blog.com/the-wheels-turn-slowly/ …