Graham— as a Trump ally—is behaving according to script.

After the house voted overwhelmingly to release a Mueller report, Graham blocked the Senate from voting & insisted that the Senate vote to look into alleged DOJ/ FBI misconduct . . .

1/ . . . particularly misconduct in the HRC investigation.
https://www.washingtonpost.com/politics/2019/03/15/house-voted-release-mueller-report-so-why-is-lindsey-graham-blocking-it/?utm_term=.779e8e2c44a7 …
This kind of maneuver is exactly what we can expect as investigations close in on Trump.

2/ How can he? Trump, Giuliani, Sarah Sanders, etc., lie and constantly change their stories, right out there in public.

Remember “I have nothing to do with Russia, folks.” Oct. 2016.
And all those denials about business deals in Russia?
https://theweek.com/speedreads/810185/8-times-trump-denied-doing-business-russia …

3/ Everyone knows that people who lie & change their stories aren't credible witnesses.

Plus Trump keeps obstructing justice (a crime) right there in plain sight.

4/ And what about all that witness intimidation? Right there in plain view.
https://www.washingtonpost.com/politics/2018/12/03/trumps-latest-tweets-cross-clear-lines-experts-say-obstruction-justice-witness-tampering/?utm_term=.09d79a3e2394 …
https://www.nbcnews.com/politics/donald-trump/democrats-warn-trump-not-discourage-or-intimidate-michael-cohen-testifying-n958171 … …
You can’t prepare a traditional legal defense while intimidating witnesses, obstructing justice & changing your story each time new evidence emerges.

5/ Trump’s critics conclude that Trump is losing his marbles, melting down, and that his lawyers are asleep at the switch.

People ask what Trump will do when he’s cornered. You're seeing it.

6/ I used to worry that Trump would start a war to distract from his misdeeds—but that is very 20th century. A war would likely harm Trump’s financial interests and he might even get hurt.

7/ 20th century autocrats immunize themselves from by torpedoing truth, undermining law enforcement, and dividing the citizens against each other. Then they keep the fighters fighting.

This one goes like this: Trump is being unfairly targeted by political opponents. The entire system is corrupt so we can’t trust anything that comes out of a law enforcement investigation.

That’s what these tweets are about👇

This involves persuading people that ALL politicians are dishonest (which makes going after Trump political). The “whataboutism” defense is steeped in cynicism, and results in the nation dissolving into tribes . . .

10/ If all politicians are lying cheats, each side prefers their own lying cheat to the enemy lying cheat.

This is why the GOP keeps talking about Hillary Clinton. She's the "enemy liar." Trump is "our liar."
https://www.foxnews.com/politics/former-fbi-general-counsel-thought-hillary-clinton-should-be-prosecuted-until-pretty-late-in-email-investigation …

Part of this strategy involves what Steve Bannon called “Flood the zone with shit” and what the Rand Institute calls a “Firehose of falsehoods.”

12/ If the news includes a constant barrage of lies & innuendos, people eventually give up trying to figure out the truth. As soon as they become persuaded that we’ll never really know who is guilty and who isn’t, fascism can take root.

13/ Timothy Snyder explains that fascism begins by clearing away factuality. As @jasonintrator says, without truth, you cannot speak truth to power. So there's only power.

Trump is working to divide the country into who is "for" or "against" him.

14/ That way, the battle isn’t about truth or justice, it is about loyalty and which side you’re on.

15/ Trump doesn’t want policy or decision making to be about truth and facts. he wants it to be about whether people are loyal to him.

Paxton refers to this as a cult of leadership.

Similarly, jury verdicts can be spun as political: “There were Democrats on the jury!” 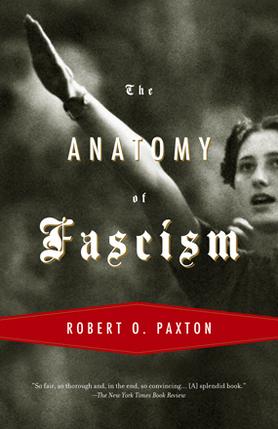 16/ As the investigation closes in on Trump he will cast this as a war between Trump and the Democrats. He will ask everyone to pick sides based on loyalty, not truth.

Dividing Americans is a goal that Putin and Trump share. (They're on the same "team")

17/ Remember just before the election when Wikileaks encouraged the Trump campaign to contest the results if he lost to HRC?
https://www.businessinsider.com/wikileaks-urged-trump-to-contest-the-2016-election-results-if-he-lost-2017-11 …

18/ Fox news commentators are casually informing their viewers that “it’s going to be total war.”

In an interview with Breitbart 👇 Trump said he has “tough” people on his side, and hinted that when they reach a certain point, things could get “very bad.” (emphasis added)

19/ To counter this, the left needs to keep cool. Do not add to the hysteria.

I suggest that an appropriate response is: “A few fringe kooks on the far right are talking about Civil War. That’s what we can expect from fringe kooks.”

20/ The far right wing has always resorted to violence when they feel threatened.

I also recommend not getting embroiled in the many inaccuracies and absurd statements in Tweets like this one👇
That is what Trump wants. The intention is to keep everyone playing “whack a lie.”

21/ Playing “whack a lie” adds to the confusion.

I suggest a simpler message: “The president is lying again & trying to undermine faith in our institutions. All Americans should oppose this. We don’t always like what law enforcement or courts do, but we accept their decisions.”

Tweet 7 should have been "21 century" (but that should be obvious). I keep looking for that edit button!

All of my threads are now blogposts. You can view this one here:  https://terikanefield-blog.com/trumps-endgame/

In my blog posts, I can make all the small corrections and tinkers that people point out, or I catch later.