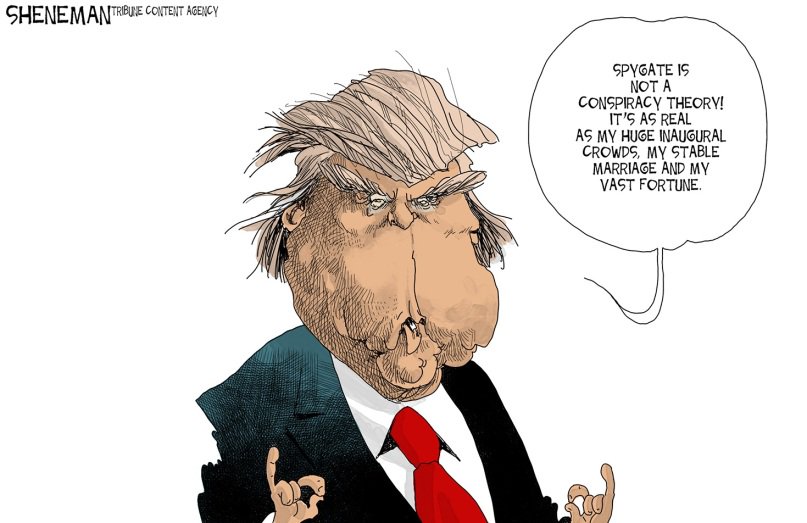 1/ Most normal Americans have never heard of "Spygate," and don't realize that most of the folks on the right who claim Russian election interference and hundreds of Trump campaign ties to—and lies about—Russia are a "conspiracy theory" actually *believe* that "Spygate" is real.

2/ The "Spygate" conspiracy theory begins with Chris Steele—a former MI6 Russian desk chief so hated in Russia for his work for a U.S. ally that he can't go to Moscow because he'll be assassinated there. In August '15, he's searching for derogatory information about Donald Trump.

3/ So far, all this is *actually* true. (I'll tell you when we get to the "conspiracy theory" Trump and his minions have been pushing.) Steele is being paid to search for derogatory info on Trump by a Republican who supports Jeb Bush. Steele finds evidence Trump is *compromised*.

4/ The info Steele finds in August 2015 about Trump being compromised—research paid for by Republicans who hate Trump—has to do with Trump engaging in private sexual conduct that the Kremlin recorded. The CIA will later confirm to the BBC this conduct occurred and was recorded.

5/ All this is still true. We haven't gotten to the "Spygate" conspiracy theory Trump believes in yet.

The next thing that happens is that Trump becomes the prohibitive favorite in the GOP primary, so the Republicans supporting Steele's research decide to stop paying for it.

6/ Steele works in business intel—the same field many of the foreign nationals (mostly Israelis) Trump will later collude with work in—so he's willing to work for whoever needs research done. Once Trump wins the GOP primary the Democrats start—*completely predictably*—paying him.

7/ This is where the "Spygate" conspiracy begins, and we enter a zone of insanity only someone tripping on acid can explain.

8/ TRUMP'S THEORY: While getting paid by the Dems—after being paid by Republicans—Steele is *actually* is cahoots with... wait for it... the *Russians*, who he spent his career fighting against and who'll have him killed if he travels to Russia. Steele strikes a deal with Putin.

9/ TRUMP'S THEORY: The deal Steele strikes with Putin has Putin feed Steele fake information about Trump through some of his top Kremlin agents. The information is designed to *hurt* Trump's chances of winning the election—because Putin wants Clinton to win (though he hates her).

10/ TRUMP'S THEORY: While no one has any idea why Putin wants Clinton to win—he's made clear to everyone he hates and fears her and thinks she'll continue Obama's sanctions on Russia—he feeds Steele the vilest lies about Trump and his aides to achieve that (self-harmful) result.

11/ TRUMP'S THEORY: Steele—a well-trained spy—wants desperately to get this fake Russian intel his pal Putin has given him (though Putin would kill him if he could) into American media (to hurt Trump—who has the most pro-Russia policy in U.S. history but who Putin wants to lose).

12/ TRUMP'S THEORY: This well-trained MI6 spy is *so* good at manipulating intel that—though he *desperately* wants to get his fake Russian propaganda to U.S. voters—he... can't find a way to do it. He has no means of leaking it to American media from *June to late October* 2016.

13/ TRUMP'S THEORY: Bear with me, friends, as it gets *sticky* here: though he's secretly working with Russia against America and could be arrested and jailed for countless federal crimes, the wily Steele decides to... {checks notes}... take his Russian propaganda to... the feds.

14/ TRUMP'S THEORY: It's good that Steele takes his Russian propaganda to the feds, because—wait for it—they're in the midst of a massive "deep state" campaign to ensure Trump loses. So—though he wanted to leak his info to voters—maybe it... uh... makes sense he went to the feds?

15/ TRUMP'S THEORY: So Steele, who wanted his propaganda in the hands of voters, gets it to—for some reason—the feds instead, but since the feds are in the midst of a massive conspiracy against Trump they (aha!) release the propaganda to the public!

No—they don't. They hide it.

16/ TRUMP'S THEORY: The agents who hide the anti-Trump propaganda so no one will see it—who also desperately want voters to see it so Trump will lose—are secretly writing each other about how much they hate Trump. They are—incredibly—the only people in America who feel this way.

17/ TRUMP'S THEORY: At some point, however, the agents are found out—oh no! But the good news for *them* is they're found out by superiors who *also* hate Trump and are part of a conspiracy to ensure he loses. So the secret texts get them promoted!

No—they don't. They get fired.

18/ TRUMP'S THEORY: For some reason—I'm fuzzy on why—the superiors then search through the entire case file on Trump (while continuing to hide the anti-Trump Russian propaganda they've received, which would've been so helpful to their plot to release!) to make sure it's unbiased.

20/ TRUMP'S THEORY: Okay, now I got it: the FBI, months before it ever speaks to Steele—who has the same idea, however!—is trying to make it look like Trump is coordinating with the Kremlin, so it gets a known Kremlin sympathizer to agree to be an FBI plant to entrap Trump aides.

22/ TRUMP'S THEORY: Flash-forward to mid-October '16, where poor well-trained MI6 spy Steele has been trying for *months* to get Russian propaganda into U.S. media, even as Russia—who Steele works for—is in the midst of the most uber-successful media-infiltration campaign *ever*.

23/ TRUMP'S THEORY: Despondent—feeling sorry for himself—well-trained MI6 spy Steele, after months of not realizing he could've just given Russia's propaganda to, uh... Russia... to release, as Russia's releasing tons of it already, has a new idea: he'll give it to @MotherJones!

25/ TRUMP'S THEORY: Trump and his family and aides have 100+ secret contacts with Russia—all of which they lie about—and Trump is secretly negotiating a deal with the Kremlin while pushing the most pro-Kremlin policy in U.S. political history, but it's all a red herring. The end.