Will Oremus @WillOremus oh-REE-mus. Senior writer for OneZero at @medium: onezero.medium.com/ Past: @slate. I write about how tech shapes us. DM for Signal. Mar. 29, 2019 1 min read

My final story for @slate is about the mystery of a seemingly random, 119-word local crime brief that somehow became Facebook's most-shared article of 2019 so far.  https://slate.com/technology/2019/03/facebook-most-viral-story-texas-child-predator.html …

I’ve probably written more about Facebook’s algorithm than any other topic in my 7.5 years at Slate. The most-read piece of my career was probably this 2016 deep dive into the news feed’s inner workings:  http://www.slate.com/articles/technology/cover_story/2016/01/how_facebook_s_news_feed_algorithm_works.html …

Last year it looked like Facebook was finally stepping back from the news. But a new study from NewsWhip shows that it has come roaring back in 2019. So I figured it was worth a closer look at what the algorithm is prioritizing *now.*

Clickbait is out. Upworthy headlines no longer work. Fake news has been nerfed. Yet for all those efforts, Facebook’s algorithm still doesn’t end up prioritizing quite what Facebook says it’s supposed to. (chart via @newswhip) 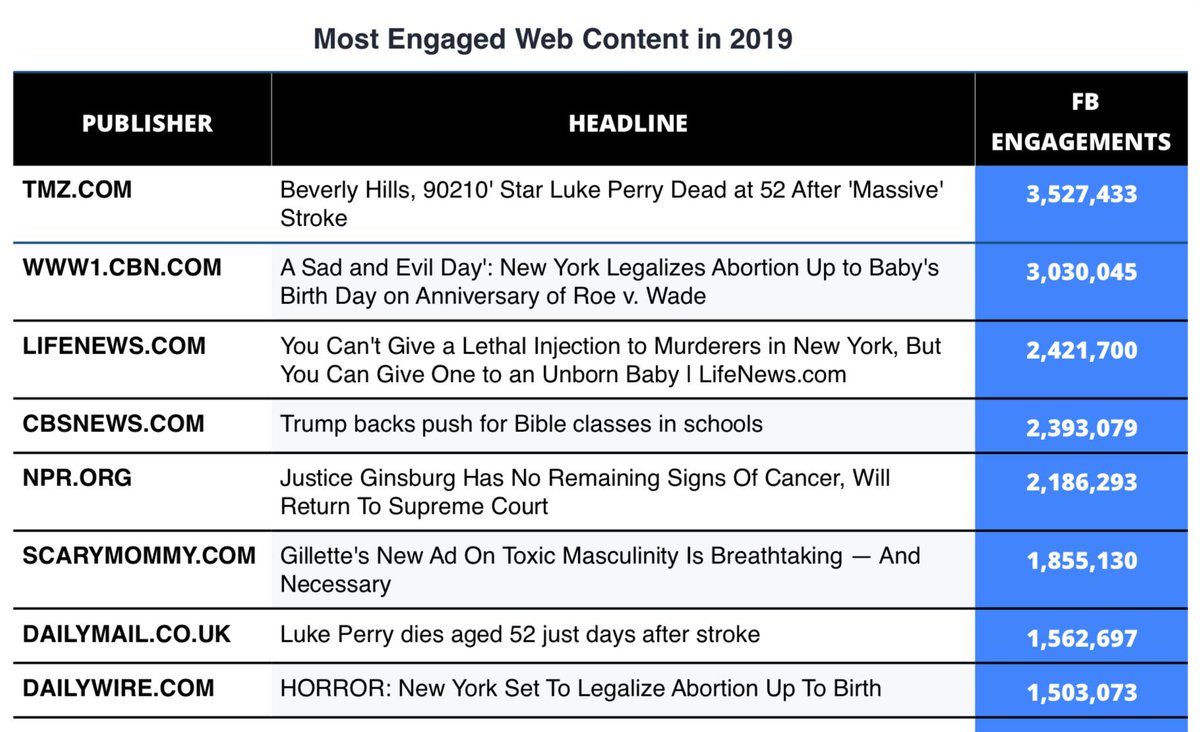 With Facebook showing you fewer stories from professional publishers and more from your friends, it matters more than ever what types of stories its *users* choose to share. Here’s what that looks like in practice (chart via @newswhip again): 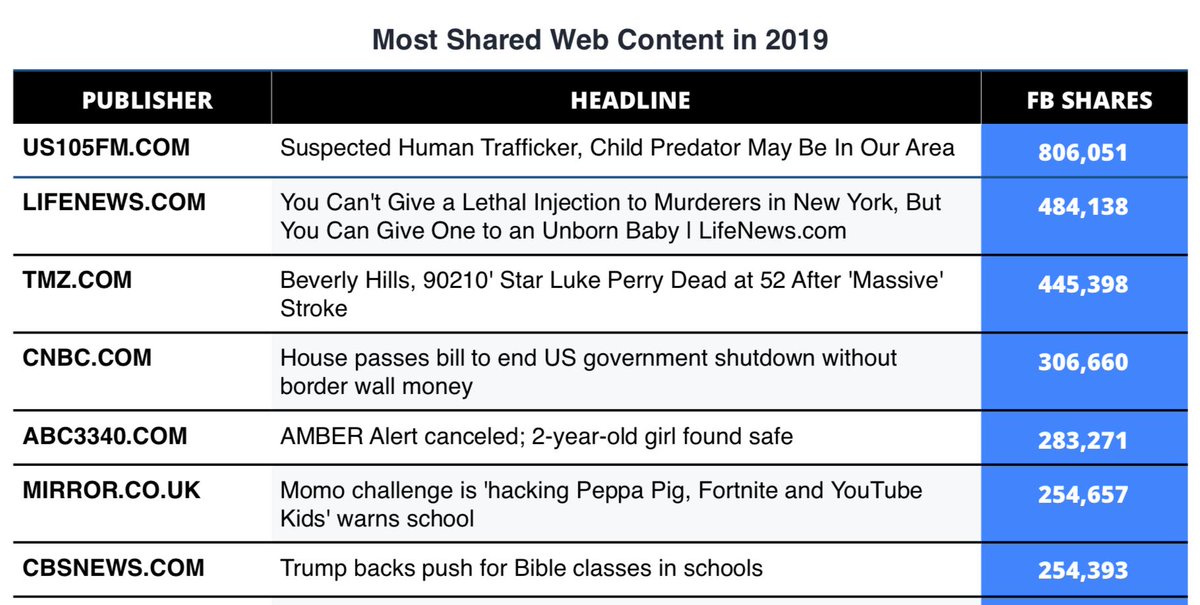 Which brings us back to the most-shared story of 2019—a rewrite of a rewrite of a press release, that managed to combine almost all the factors Facebook is boosting and yet still look nothing like the “high-quality content” it wants to prioritize.  https://slate.com/technology/2019/03/facebook-most-viral-story-texas-child-predator.html … 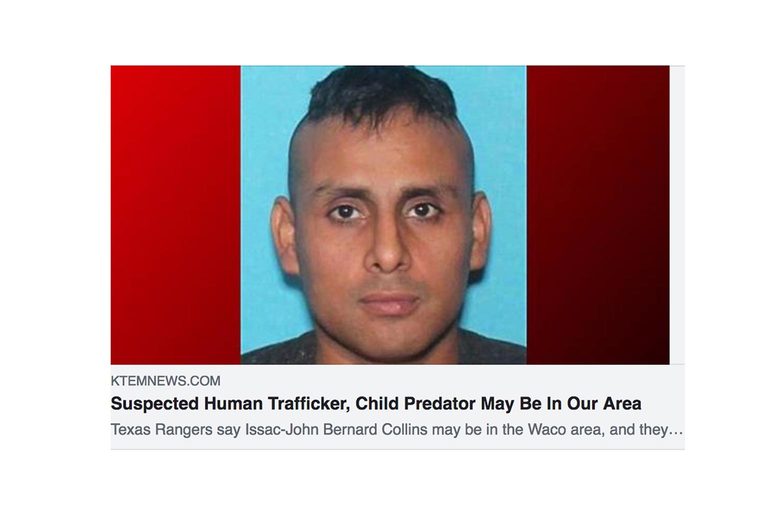 Oh and by the way... that suspected child predator? Texas authorities told me he was arrested nearly 2 months ago, and was safely in custody even as the story about him being at large was being shared to massive pro-Trump pages and terrifying Facebook users across the country. 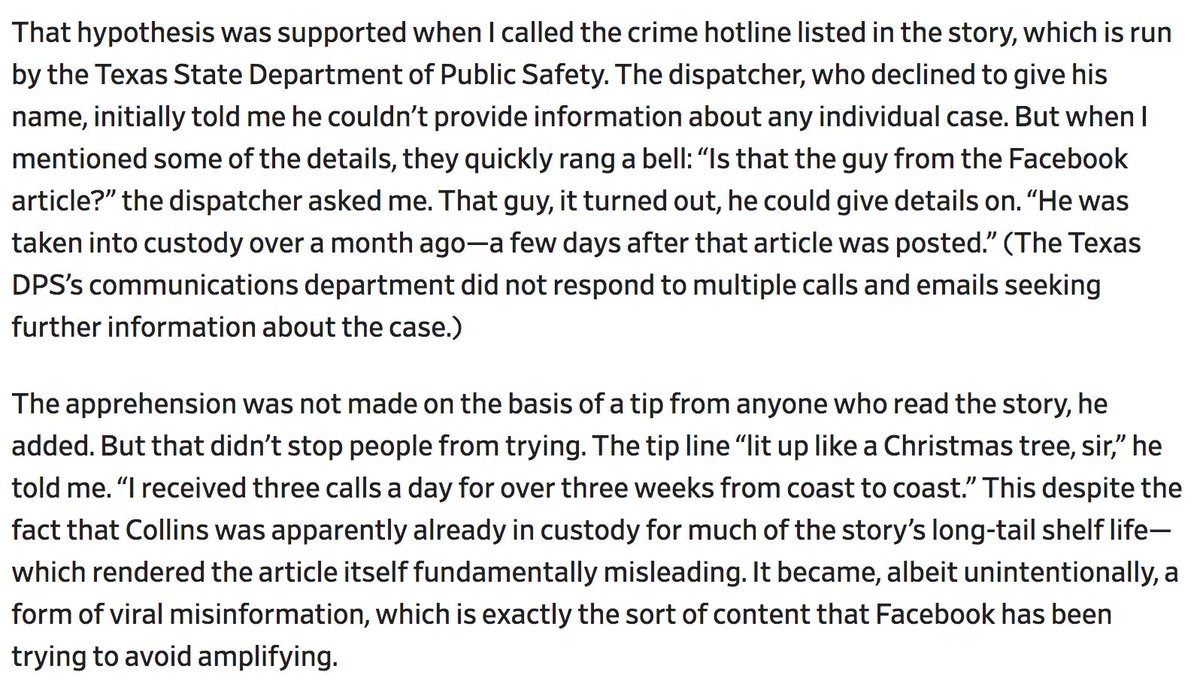