Solar, wind, and batteries are about to enter their third, most disruptive phase yet. There's reason to believe their growth will accelerate, not slow. & that we'll phase out fossil fuel electricity at an incredible pace. A threid based on this post:  http://rameznaam.com/2019/04/02/the-third-phase-of-clean-energy-will-be-the-most-disruptive-yet/ … 1/

Phase 1 - When renewables were completely policy dependent, lasted from the 1970s until about 2015. Before 2015, there was almost no place on planet earth where solar or wind - without subsidies - were cheaper than coal or gas. Their growth was entirely a factor of policy. 3/

By the end of the policy-dependent phase 1, solar was only 1% of world electricity, and wind power was perhaps 4%. The world spent hundreds of billions of dollars subsidizing them, but seemingly got little.

Except we got the most important thing: Their prices dropped >10x. 4/

Solar and wind (and storage) prices dropped so much because of the learning curve. Every doubling of solar scale drives prices 25-30% lower. Every doubling of wind scale leads to prices 15-20% lower. This is the whole point of policy. Policy is all about lower prices. 5/

Around 2015, solar & wind in some parts of the world entered Phase 2: Unsubsidized solar & wind were sometimes cheaper than new coal or gas. This was an incredible tipping point (which I first called in 2011). It changed everything. Growth was no longer entirely policy-based. 6/

You can see the massive effect the policy had on costs in this chart from IRENA. Just since 2010, we've seen an incredible price decline, and solar, in particular, become competitive without subsidies for the first time. 7/ 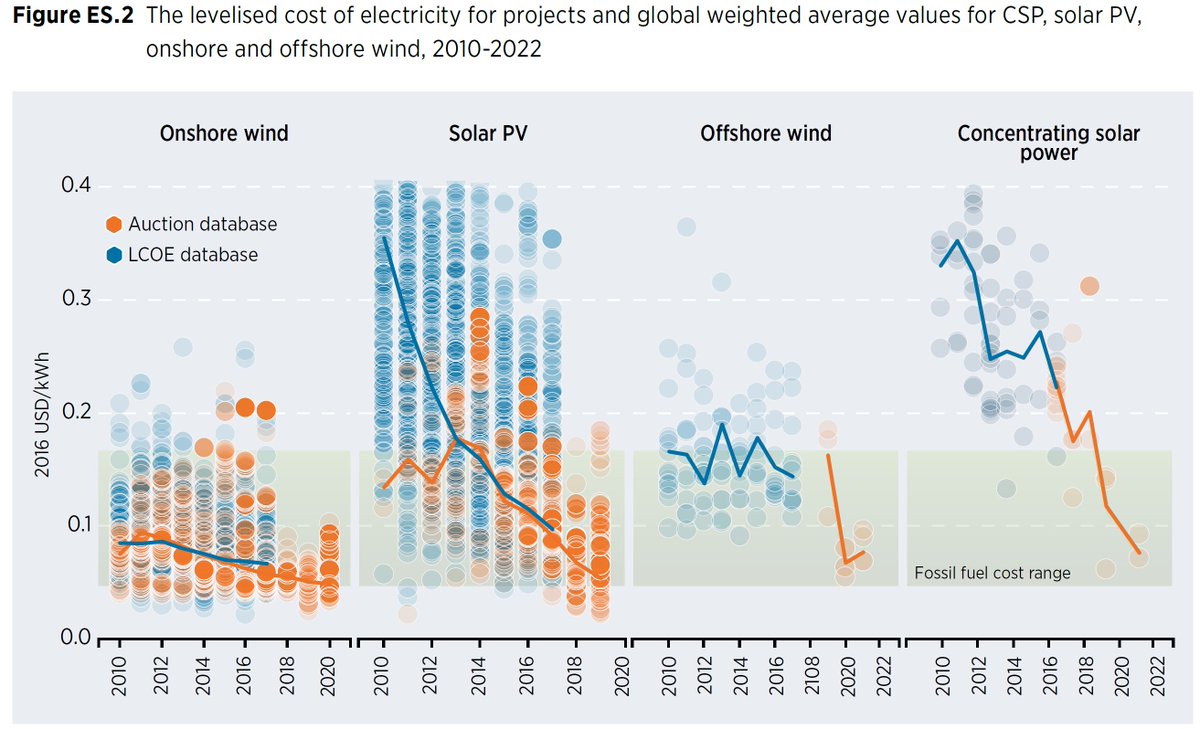 Now, just 4 years later, solar and wind are on the verge of Phase 3: New solar & new wind are sometimes cheaper than operating *existing* coal or gas. Holy shit. This is a tipping point almost no one saw coming. Don't believe me? Consider the following: 8/

October 2018: Indiana utility NIPSCO says the cheapest thing for their customers is to go from being 65% coal powered in 2018 to 15% by 2023, and eliminate coal entirely by 2028. Replacing it all with solar, wind, storage, and flexible demand:  https://www.utilitydive.com/news/even-in-indiana-new-renewables-are-cheaper-than-existing-coal-plants/540242/ … 10/

March 2019: Florida Power and Light says it will shut down two aging natural gas plants, replacing them with efficiency, distributed storage, and the biggest battery the world has ever built (so far), to shift solar from mid-day to the evening peak:  https://arstechnica.com/information-technology/2019/03/florida-utility-to-close-natural-gas-plants-build-massive-solar-powered-battery/ … 11/

Meanwhile, @CarbonBubble puts out reports showing that they agree with NextEra. By early 2020s, new solar will be cheaper than existing coal in the US:  https://www.carbontracker.org/reports/no-country-for-coal-gen-below-2c-and-regulatory-risk-for-us-coal-power-owners/ … 12/ 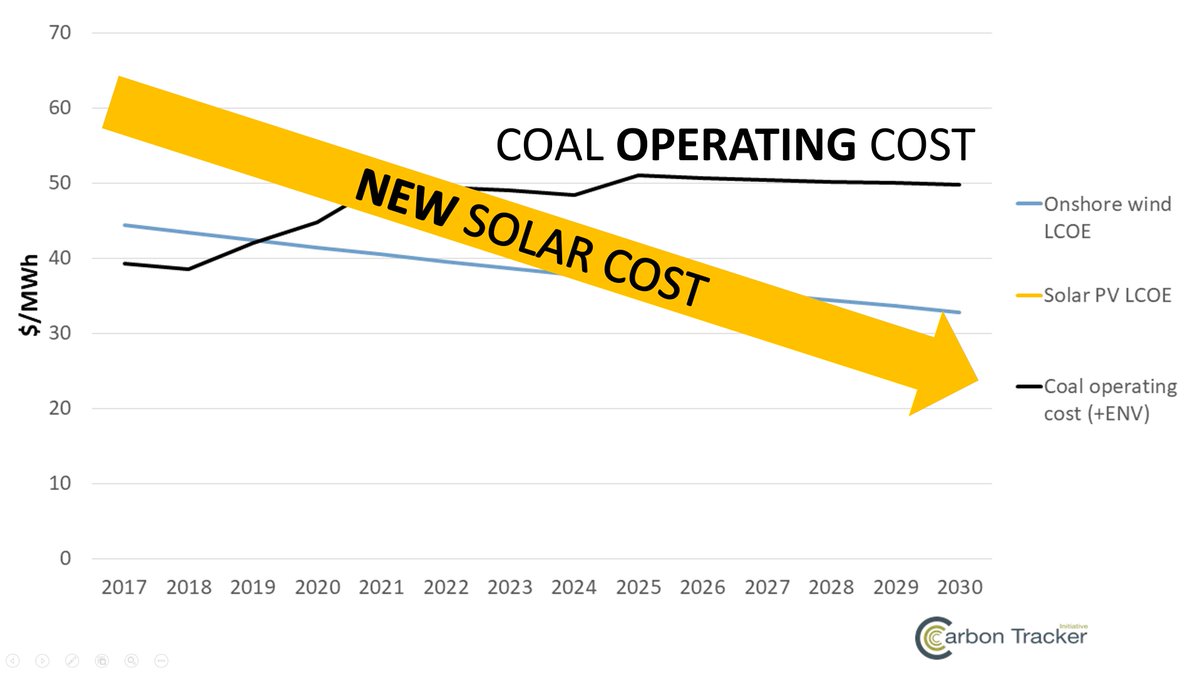 Much more importantly, @CarbonBubble finds that in CHINA, it will be cheaper to build new wind and new solar than to operate the existing coal fleet by the early-to-mid 2020s. China.  https://www.carbontracker.org/reports/nowhere-to-hide/ … 13/ 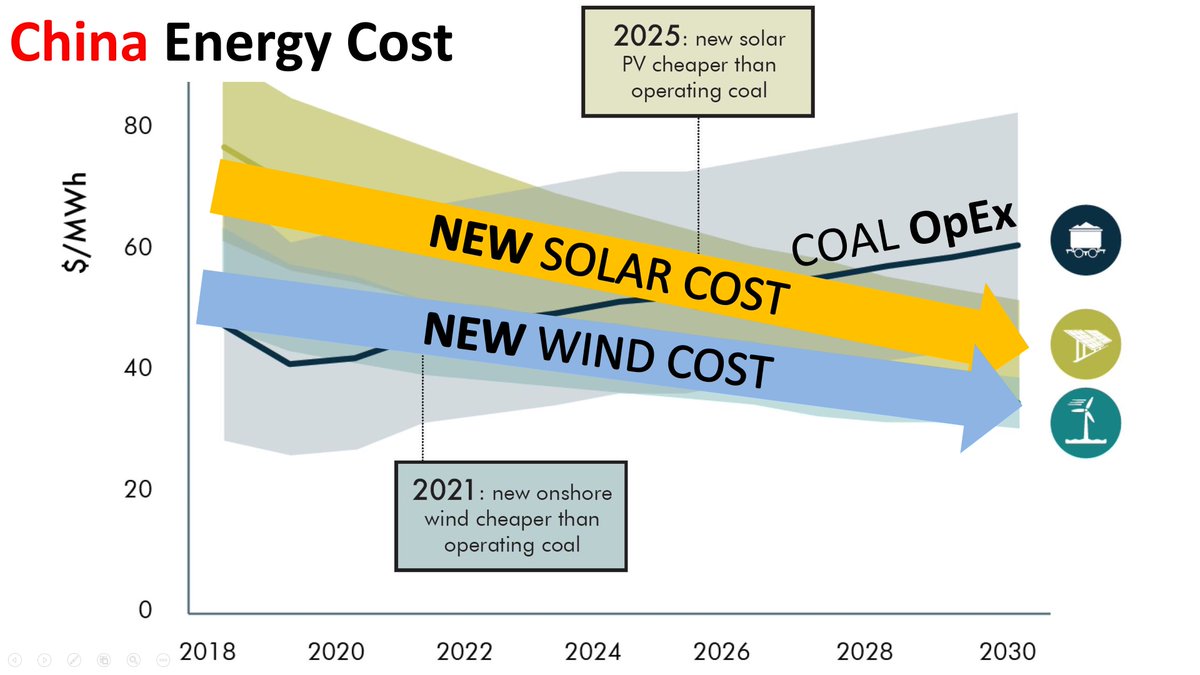 Okay. Maybe you think CarbonTracker is biased? Well, a couple weeks ago in their 2019 Global Energy Perspective, @McKinsey reports that new solar and new wind will be cheaper than existing coal or gas.... pretty much everywhere by 2030.  https://www.mckinsey.com/industries/oil-and-gas/our-insights/global-energy-perspective-2019 … 14/ 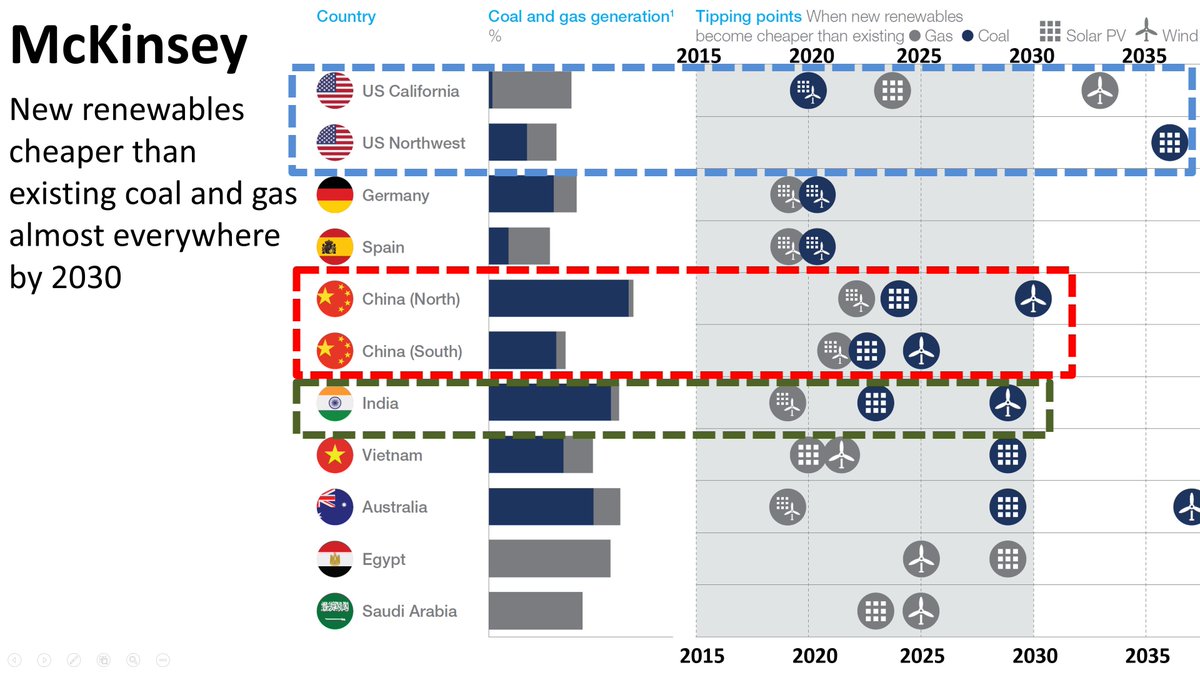 The implications of this can't be overstated. If building new solar, wind, & storage truly becomes cheaper than operating *existing* coal or gas plants this decade, than the pace of switching is bounded only by how fast we can build factories, train crews, & deploy capital. 15/

This Third Phase of renewables will be different than any other. Everything we know about growth rates is from an era when renewable growth was governed mostly by policy - and policy is fickle and changeable. This new phase will be driven by economics. 16/

And those economics have a major feedback loop in them. As country after country deploy more renewables, the larger scale will lead the price of renewables downward through the learning curve, making them more and more irresistible in a wider swath of the world. 17/

There will, of course, be a Phase Four of renewables. Value deflation is real. Too much production of energy at a given time drives down wholesale prices. And while daily storage of several hours looks likely to get cheap, we don't yet have a solution for seasonal storage. 18/

So we may very well reach that slowing phase of the S curve. But it's distant. It will hit us when renewables are 70%+ of the world's electricity, not when they're 8% as they are today. 19/

In short: Buckle your seat belt. There's every reason to believe that we're hitting an inflection point in renewables. That we're still at the low end of the S-curve and about to bend sharply upwards. 20/