In June 2017, I wrote a whole thread on Rachel Brand (then the #3 at DOJ) on the assumption that, per DOJ regulations, Rosenstein was about to recuse himself from the Trump-Russia probe. Of course Rosenstein never did that, and now we're seeing, 21 months later, the consequences.

Imagine if anyone had been listening to the many lawyers who said in June 2017 that Rosenstein overseeing Mueller would eventually become a big issue. And now Barr says Rosenstein helped him decide to *clear Trump completely* of obstruction. Rosenstein was like a delayed grenade. 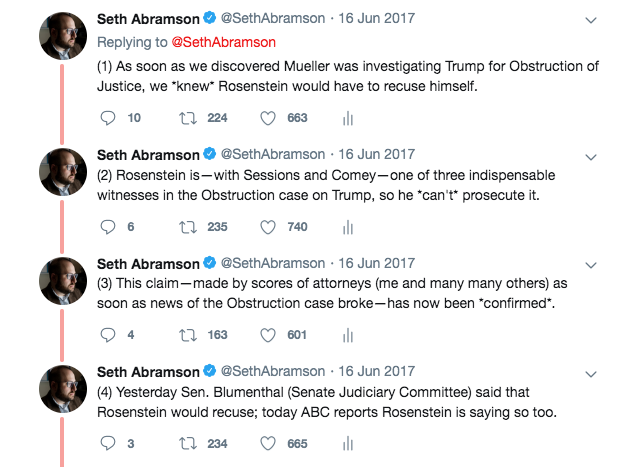 By helping make the decision to "clear" Trump on obstruction—when Mueller was *actually* trying to refer a substantial obstruction case to Congress for impeachment consideration—Rosenstein has cleared *himself* from being a witness or possible participant in a high-profile crime.

After the Barr Letter, someone found a December 2017 tweet in which I predicted Mueller would work as hard as he could to send a substantive obstruction case to Congress for impeachment consideration. I've been *savaged* for that tweet. And yet... 18 months ago... I was correct.

I said Rosenstein should recuse himself and that Mueller would send a substantive obstruction case to Congress for impeachment consideration. Then Rosenstein violated DOJ regs by not recusing and helped Barr *obstruct* Mueller (pun intended) in what he aimed to do on obstruction.

I haven't always gotten every observation or presumption right on Trump-Russia—not one journalist has even come close to doing that (nor could they) after 2+ years of the most complex federal case of our lives. But that December 2017 tweet is *not* one of the ones I second-guess.