(FACTS) In 1992, then-AG/current AG Bill Barr helped orchestrate a pardon of Bud McFarlane—co-founder of IP3, the outfit behind Trump's secret transfer of nuclear tech to MBS. McFarlane worked with Flynn on the latter plot; both men were at the Mayflower with Trump in April 2016.

1/ Yes—I'm saying that McFarlane and Flynn were working with the Saudis beginning in '15, then Trump invited both men to his foreign policy rollout in April '16, then 60 days later a Saudi cutout came to Gates offering pre-election collusion, then in August Trump Jr. accepted it.

2/ Then, after Trump won, Flynn and Kushner met with Kislyak on December 1—and Russia was *absolutely essential* to the IP3 plan McFarlane and Flynn devised—and then just 96 hours later, who comes to Trump Tower? Bud McFarlane. Folks—Russia is just a small piece of what's coming.

3/ Why don't you hear about this much in the media? Not because they understand it and don't think it's important, but because they don't understand it. They're going to do what they always do: wait for EDNY to indict and then claim either they were on it all along or no one was.

4/ I only understand it because I'm writing a book on it—and have just read 200 articles on it from around the world: Israel, Saudi Arabia, England, Russia, Qatar, and (yes) a few great pieces in American news outlets that unfortunately were never linked up to the Russia scandal.

5/ I was first to locate and post the picture below: Bud McFarlane and Sergey Kislyak entering Trump's April 2016 Mayflower event—where Trump rolled out his foreign policy. They're coming in from a 24-person VIP event with Trump. Hey media, maybe write about what's in Bud's hand? 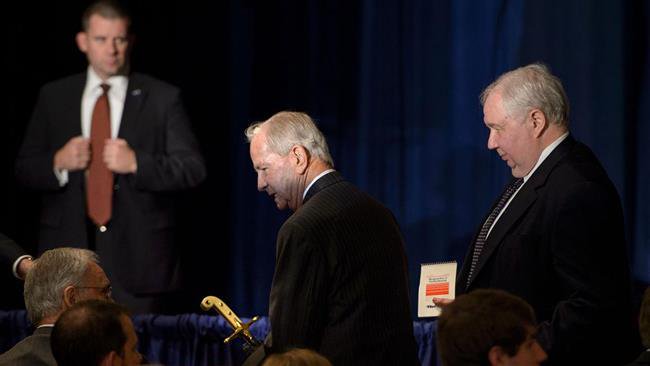 6/ As camera shutters start going crazy, the 24 VIP attendees to Trump's pre-Mayflower Speech event enter the ballroom. What an *interesting group* to have special access to Trump and his advisers for an hour—just before Trump unveiled his foreign policy.  https://youtu.be/eQA3n2YVtqM?t=1913 …