(THREAD) So much disinformation is being spread about the Mueller investigation—in some cases with uncritical repetition by the media—that it's time for some clarifications before the conspiracy theories Trump and Barr are selling become gospel. I hope you'll read on and retweet. 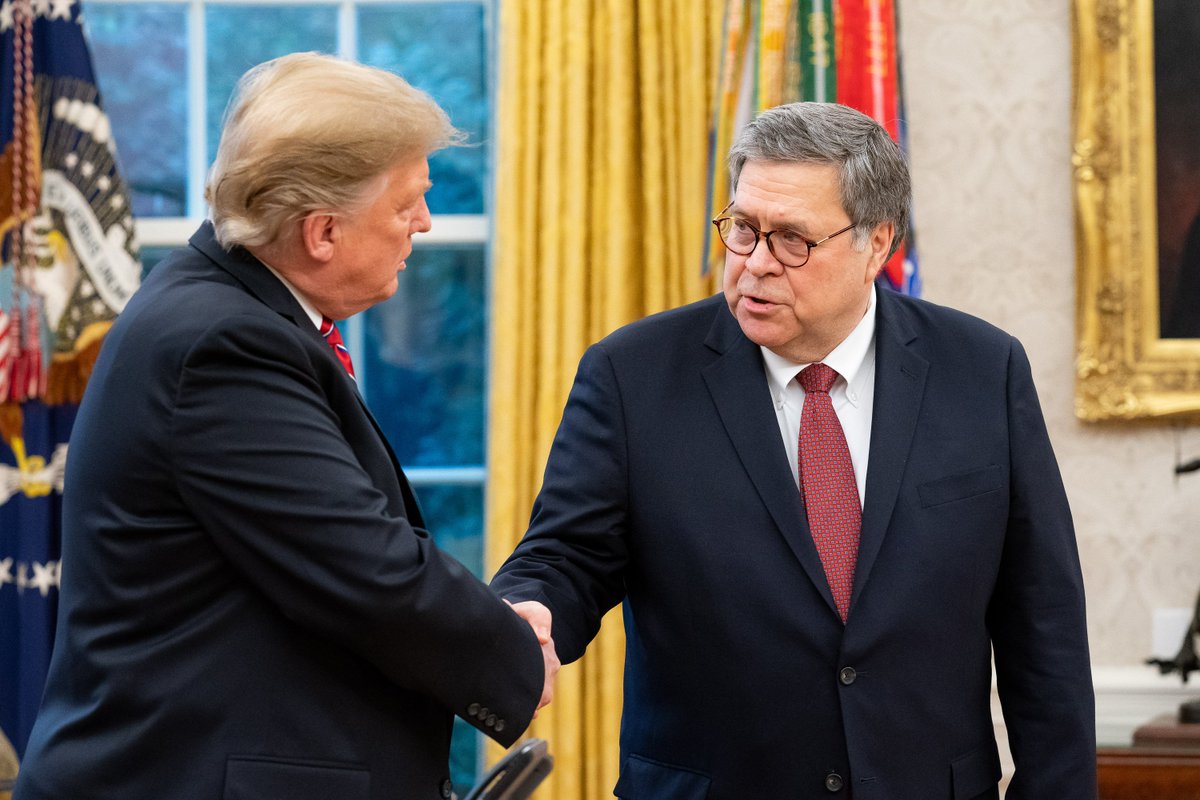 1/ In June 2016, American intelligence received intel from allied intelligence agencies—that is, we received information intended to safeguard U.S. national security from our longtime allies—indicating that Trump aides were having suspicious overseas conversations with Russians.

2/ When we learned CIA director Brennan had gotten such intel, the reports that came to us had plenty of euphemisms—that is, Western intel agencies were likely doing intercepts, so they had *some* sense of the content of such Trump-Russia conversations, not just their occurrence.

3/ Because it's illegal for a campaign to receive any financial or in-kind value from foreign nationals, and because any clandestine Trump-Russia meetup would therefore give the Kremlin blackmail material over the Trump campaign—the threat of revealing the meeting—a probe ensued.

5/ Separate from the intel received from Western intel agencies in June 2016, which intel apparently continued to be received into July 2016, U.S. intelligence knew that one of the men involved, Carter Page, had previously been suspected of being a Russian spy—with good reason.

6/ In a pre-2016 probe, Page was found to have procured info at the request of Kremlin spies, and then, after U.S. intel approached him and told him this, a) it was unclear whether he knew he'd been dealing with spies, but also b) he *continued calling himself a Kremlin adviser*.

7/ Another man U.S. intel began looking at, Paul Manafort, was known to have worked on Putin's behalf in Ukraine for many years, so here too there was Russia-related information already held on one of the individuals Western intel agencies were saying was having secret meetings.

8/ In July 2016, U.S. intelligence received *additional* intel from the Australians—which they'd been holding onto for 60 to 90 days—that George Papadopoulos told an Australian diplomat that he'd been in contact with a Kremlin agent who said the Kremlin had stolen Clinton emails.

10/ Again, *for the duration of the Trump campaign's existence*, the fact of a *federal counterintelligence probe* into certain members of that campaign *did not leak*. Indeed, not only did it *not* leak, the feds *lied to the NYT* in October 2016 by saying no such probe existed.

11/ There *should* have been a *massive* investigation into why U.S. intelligence *lied* to the New York Times in October 2016 about the existence of a probe of the Trump campaign, rather than simply saying it would neither confirm nor deny that. It *chose* to mislead Americans.

12/ Meanwhile, even as U.S. intelligence was lying to American media to protect Trump, we have *ample* evidence that rogue FBI agents in the New York field office were threatening to *illegally leak intel about the Clinton case* if FBI director Comey didn't agree to *reopen* it.

13/ So if you're counting at home, that's *two* systematic attempts to protect Trump and harm Clinton by federal entities *before* Election Day. Neither has ever been investigated, and needless to say Attorney General Barr has *no* interest in looking into either of those things.

14/ In the summer of 2016, federal law enforcement received *another* tranche of intelligence: in this case from the former Russia desk chief for MI6—an allied intelligence agency—who'd *repeatedly* worked with the FBI on past investigations and was considered a *trusted source*.

15/ That man's name was Christopher Steele. Steele went to someone he knew at the FBI from prior joint work, Bruce Ohr, and told him he had *raw intel* from sources he had developed in Russia when he was at MI6. *No one* told him to go to the FBI—he decided on doing so *himself*.

16/ Steele gave his raw intel to the FBI in the *very same spirit* of coordination between allied intelligence agencies that he had exhibited in *many* years at MI6 (note that Steele's reputation as a spy was *so* good that the MI6 tasked him with *training other British spies*).

17/ Aha! you might say. Surely *this* is the point at which the FBI does something to hurt Trump pre-election, which assault on democracy AG Barr is now upset about!

And the answer is...

...no! The FBI *also* buried the intel Steele gave them for the *entirety of the campaign*.

18/ Steele was mystified that the FBI was doing nothing with his intel—which he estimated to be 85% accurate, suggesting it was strong but still unprocessed—and so he chose, on his own, to get in touch with media. A turning point for Steele was U.S. intelligence lying to the NYT.

19/ So Steele believed his intel was *deliberately* being buried by US intelligence agencies—and his fears were *proven true* in the ten days before Election Day, when those agencies lied to the NYT about the existence of a counterintelligence probe rather than having no comment.

20/ At some point *after* Page had left the Trump campaign, and *without* leaking to anyone the existence of a counterintelligence investigation, the feds secured a FISA (Foreign Intelligence Surveillance Act) warrant on Page *partially* using the raw intel they had from Steele.

22/ But more importantly, *it was just a damn warrant*—not a conviction. The FISA court almost *never* denies a warrant application, and the standard of proof required is essentially an elevated form of probable cause—a low standard—because a U.S. citizen is involved. That's key.

23/ In other words, federal law enforcement had *way* more than the evidence it needed to secure a surveillance warrant on the (post-Trump campaign, remember!) Carter Page. And yes, it transparently indicated to the FISA court the origin of Steele's work and his raw intelligence.

24/ So what the hell—you may ask—is Barr talking about in referencing "spying" on Trump's "campaign"? And why is he talking about *that*, not anti-Clinton leaks from the NYC FBI field office or anti-Clinton lies told to the NYT about the existence of a counterintelligence probe?

25/ So far, the *only* even *possible* event Barr could be referring to is a claim by George Papadopoulos—a *self-identified* "Kremlin intermediary" during the Trump campaign who was *secretly trying to set up a clandestine Trump-Putin summit*—involving a man named Stefan Halper.

27/ So, *at worst*, while U.S. intelligence was carefully and studiously protecting the fact of a well-founded counterintelligence probe against certain Trump aides (not Trump) it had a cooperator talk to a Trump aide who was then acting—per its sources—as a Kremlin intermediary.

29/ So of *course*, what's the *one thing* Trump's handpicked AG wants to investigate? The thing US intelligence did *right* in the pre-election period.

This should distress all law-abiding Americans who love our democracy and our rule of law—because it's *chillingly* political.

30/ Meanwhile, Barr *also* undercut DOJ regs by opining on obstruction—a probe *Trump* initiated by his own conduct in 2017—when it wasn't his place to do so. And *now* he's going to distract attention from Mueller's findings with—it sure seems—an unwarranted new Special Counsel.

CONCLUSION/ When journalists know certain facts are wrong from prior reporting, they're *obligated* not to *amplify* the voices of those spreading disinformation—but rather, to stay focused on the *truth* and U.S. national security. Barr and Trump are playing media like a fiddle.

PS/ Keep in mind the Halper-Papadopoulos conversation—even if orchestrated by the FBI—would in no way whatsoever be spying, but rather a fairly conventional investigative method as part of a validly established counterintelligence operation. There were no unauthorized intercepts.