"We noted, among other things, that the President stated on more than 30 occasions that he does not 'recall' or 'remember' or have an 'independent recollection' of information called for by the questions."

Trump had "no independent recollection" whether he spent any time at Trump Tower during these days.

Did Trump chat with his old friends from the Miss Universe beauty pageant in Moscow, the Agalarov family, between June 3, 2016 and the end of the campaign?

Trump has "no independent recollection" of that either.

He didn't even know her name, he added.

Trump to Mueller: "I have no recollection of being told during the campaign that Vladimir Putin or the Russian government 'supported' my candidacy or 'opposed' the candidacy of Hillary Clinton."

In fact, Trump told Mueller: "I have no recollection of being told during the campaign that any foreign government or foreign leader had provided, wished to provide, or offered to provide tangible support to my campaign."

Apparently leaving open the possibility that it may have happened, Trump claimed: "I do not recall being provided any information during the campaign about the hacking of any of the named entities or individuals before it became the subject of media reporting."

When asked by Mueller why he made the "Russia, if you're listening" remark, Trump said he made it "in jest and sarcastically" before adding that he did not "recall" talking about it with anyone before the press conference.

Trump's memory failed him again when it came to Roger Stone. 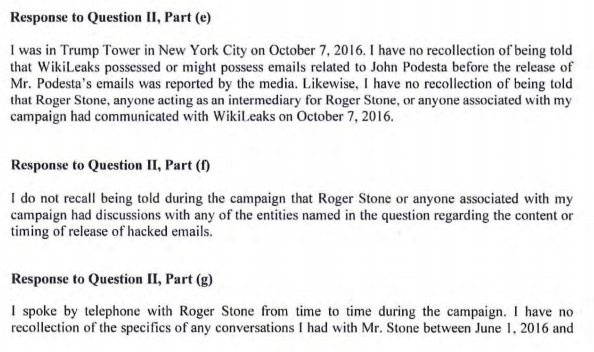 Trump: "I do not recall being aware during the campaign of specific efforts by foreign individuals or companies to assist my campaign through the use of social media postings or the organization of rallies."

Did Trump talk to Cohen about Trump Tower Moscow?

"I had few conversations with Mr. Cohen on this subject. As I recall, they were brief, and they were not memorable." Trump additionally claimed he didn't recall discussions, travel plans, or Sater-Cohen communications about it.

"l had no knowledge of Mr. Manafort offering briefings on the progress of my campaign to an individual named Oleg Deripaska," Trump claimed, adding he didn't know whether Manafort shared internal polling data with Kilimnik. (without saying Kilimnik's name)

Did Trump know about efforts by Russian officials to meet with him and senior campaign members?

Why did the GOP change its platform on the Ukraine with Trump's nomination?

"I have no recollection..." 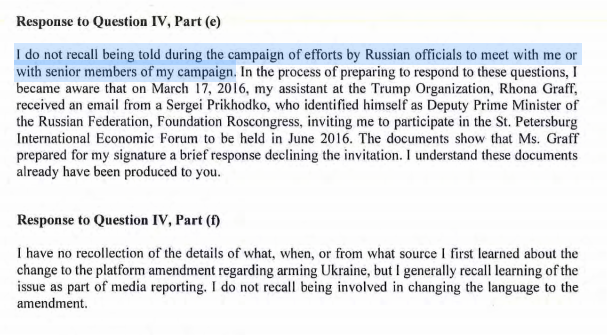 "I do not remember having been asked to attend the World Chess Championship gala, and I did not attend the event." 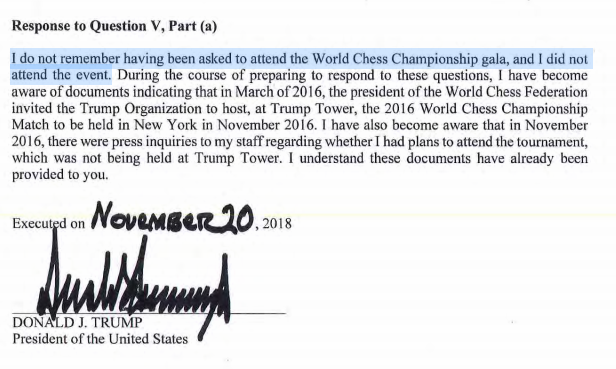