While the Russian government was busy interfering in the presidential election in “sweeping and systematic fashion,” 👇what were members of the Trump Campaign doing?

1/ They were busy establishing Russian links and contacts, eagerly anticipating profiting and benefiting from all that Russia love—and lying through their teeth about these links to the American people and investigators.

2/ Part of Mueller's mandate was to find “links and/or coordination” between the Trump campaign and Russia.

3/ There were so many links you’d think English was the campaign’s second language.

There are too many to list them all, so I’ll jam a few details from each category into a tweet, with page numbers if you want more details.
https://dataviz.nbcnews.com/projects/20190415-mueller-report-embed/assets/full-mueller-report.pdf …

Trump told Cohen that his campaign would be a significant “infomercial” for Trump-branded properties.

5/ Papadopoulos (80-95): He met Prof. Mifsud & two Russian nationals, learned the Russians had “dirt” in the form of Clinton’s emails, and—as a Trump campaign national security advisor—pursued relations with Russians and kept the campaign informed about his outreach to Russians.

6/ Carter Page (95-103) touted his “high level contacts in Russia,” traveled to Russia and cultivated those (and more) contacts.

Special Counsel “was unable to obtain additional evidence or testimony,” so Page’s activities in Russia are “not fully explained.”

CNI had contact with Jeff Sessions and Kushner, and hosted a Foreign Policy Speech at the Mayflower Hotel. Kushner and Simes stayed in contact after the speech.

8/ Trump Tower Meeting (110-123). Goldstone relayed to Trump Jr. that “The Crown prosecutor of Russia” offered to provide docs and info that would incriminate HRC “as part of Russia and its government’s support for Mr. Trump.” (More on the meeting in a later thread). 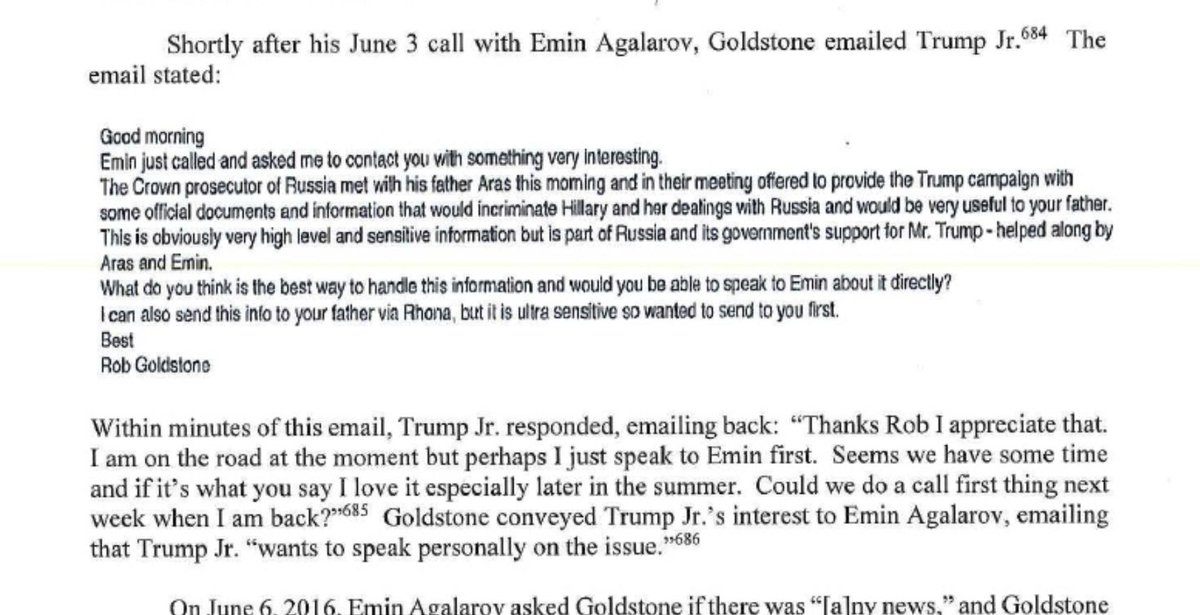 Kislyak (Russian ambassador) met with Sessions and J.D. Gordon. Changes were made to the GOP platform to keep consistent with what they knew to be Trump’s wishes. The campaign asked for a single change.

10/ Manafort (129-141).
Special Counsel has evidence that Kilimnik is a Russian spy.
Manafort instructed Gates to provide Kilimnik with updates about the Trump campaign, including internal polling data and strategies.
Manafort was evidently acting for his own gain and profit.

11/ “As soon as news broke that Trump had been elected President, Russian government officials and prominent Russian businessmen began trying make inroads into the new administration.”

"began trying" is an understatement from what I can see. "Rushed" is more accurate.

12/ Seychelles (151-158): Nader, Prince, and Bannon gave conflicting accounts of what happened after the meeting, so Special Counsel (SC) could not determine precisely what happened.

This happened a few times: SC could not get enough hard evidence to determine what had happened.

This was just a sampling.
There were more than 100 pages of links—but the list isn't comprehensive. SC did not investigate all publicly reported contacts.

14/ What’s most striking—aside from the dizzying number of links and contacts between Russians and Trump Campaign officials—is how hard the campaign tried to cover up their links with Russia.

15/ Meetings with Russians were cancelled when the news reported that Trump was pro-Russia with Russian contacts (mustn’t have people thinking THAT!)

When the news reported Manafort’s ties to Russia and Ukraine, he left his position as campaign manager, but he continued on . . .

16/ . . advising the campaign and even communicating with Trump.

Campaign members lied to the public about the extent of their links, lied to Congress, and several of them (Papadopolous, Manafort, Flynn) lied to Special Counsel.