Sometimes lying and obstructing is a crime.
Sometimes it isn’t.

It’s time for some Fun With Criminal Law.
(That means more IRAC)

---
Part I begins here:
Or here if you prefer blog posts:  https://terikanefield-blog.com/category/mueller-probe/mueller-report/ …

1/ To review, IRAC is a method of legal analysis.

Let’s start with this one:

2/ For the Rule, we plug in the elements of the crime of obstruction of justice:

To get a conviction a prosecutor must prove each element beyond a reasonable doubt.

3/ To do the analysis, we look to see if there are facts to support each element beyond a reasonable doubt.

The facts are given more fully in Vol. II, 113- 110.
(I don’t have room here to list them all)
https://www.nbcnews.com/politics/politics-news/read-text-full-mueller-report-n994551 …
June 2017: Trump ordered McGahn to fire Mueller;

4/ McGahn refused;
January 2018, the media reported the story;
Trump, through his personal lawyer and two aides, “sought to have McGahn deny” the story and create a false record;
McGahn refused because the story was true and he wouldn't lie.

Trump, in media interviews, denied that he had tried to fire Mueller.
Mueller looked at all the evidence and concluded that "the weight of the evidence" is against Trump. [Straight talk: Mueller concluded Trump was lying.]

6/ Evidence includes multiple witnesses (who testified under oath) and contemporaneous notes and records.

7/ To establish a nexus, the prosecution must show that Trump’s actions would tend to hinder, delay, or prevent communication of information to investigators.

Mueller concludes the answer to Element 2 is yes, from this evidence:

8/ Trump knew that Special Counsel was investigating obstruction-related events, and that the investigation wasn’t complete;

McGahn changing his story would undercut McGahn's “credibility as a potential” witness;

9/ Trump specifically wanted McGahn to produce a written document: Trump wasn’t simply engaging in a media strategy, or he would have given an interview denying the story. Instead he specifically asked McGahn to write a letter “for our records" 10 days after the stories ran.

Several facts support the conclusion that Trump “acted for the purpose of influencing McGahn’s account in order to deflect or prevent further scrutiny” of his “conduct toward the investigation.”
These include:

11/ Trump had “laid the groundwork” for “pressing McGahn to alter his story” by telling others that it might be necessary to fire McGahn if he didn’t deny the media story.

12/ Trump’s statements to witnesses reflect his understanding that the events of the past summer (when he ordered McGahn to fire Mueller) would be part of an obstruction of justice inquiry.

13/ The Report explains that obstruction doesn’t have to succeed for it to be obstruction. (v.II 11-12)

[This makes sense, right? If it succeeds, there won't be any charges. Kind of like: Treason never prospers, and what is the reason? If it prospers, none dare call it treason.] 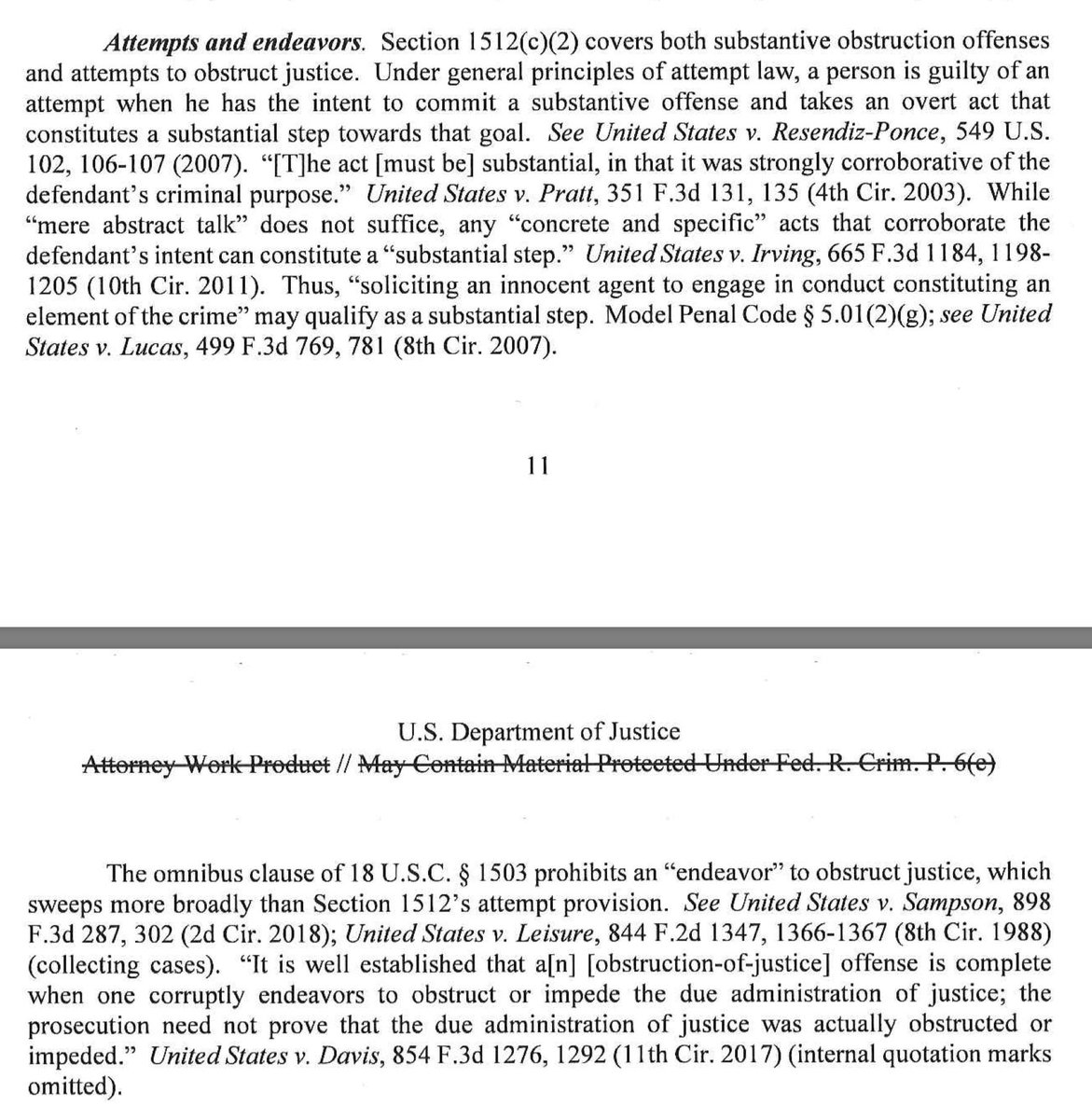 Issue: Did Trump obstruct justice when he tried to prevent the relevant emails setting up the June 9, 2016 Trump Tower meeting from being disclosed, and when he dictated a false letter about the events?

15/ We look at each of the three elements of obstruction.

💠Was there an obstructive act? Yes.
On at least three occasions, Trump directed Hicks and others not to disclose the information, and he edited a misleading response for Trump, Jr.

💠Was t here a nexus to an official proceeding: No.

The evidence (given more fully on Vol. II, pages 98-106) shows that Trump was trying to mislead the press, not investigators. The lying was a media strategy.

💠 Was there corrupt intent? No.

Evidence established that Trump's intent was to minimize public disclosure about his campaign’s connection to Russia, but there was insufficient evidence that he intended to interfere with an investigation or proceeding.

18/ In other words, he corruptly intended to lie to the media, not obstruct a judicial proceeding.

Lying to the press isn’t a crime (and it shouldn’t be) because it would be too easy for prosecutions to be political . . .