Did you read Report?

The problem isn’t that Trump stood by and expected to benefit from a foreign criminal attack on our elections.

The real problem is U.S. Senators telling bald-faced lies to the American people.

The report stated: “while the investigation identified numerous links between individuals with ties to the Russian government and individuals associated with the Trump campaign, the evidence was not sufficient to support criminal charges.”👇

2/ Lots of links, but “evidence not sufficient to support criminal charges” is different from “no collusion.”

But of course, you already knew that. You’re distorting the Report on purpose.

As it turns out, the report establishes a few things that are worse than "collusion."

3/ While Russian Military Unit 74455 was hacking Democratic computers in an attempt to tip the election to Trump—and while Russians were weaponizing stolen materials—Trump and his campaign knew what was happening, and did nothing.

4/ What's even worse is that the investigation established that Trump and his campaign “expected it would benefit electorally from information stolen and released through Russian efforts . . .”

That passage is on Page 5 of Vol. I, in case you missed it.

Are you OK with the Trump campaign standing by and failing to report a criminal attack from a foreign government, all the while expecting to benefit in the election from those crimes?

Or do you like winning so much it doesn't matter how?

6/ You said “no underlying crime.”

Yes, there were underlying crimes. Lots, including Trump’s campaign manager, who was passing inside information from the Trump campaign to Russian intelligence. Also, Trump’s personal lawyer, a few of his senior level campaign staff, etc.

7/ Having loyalties to other countries over the U.S. almost seemed to be a job qualification if you wanted to work for Trump.

8/ Special Counsel specifically said he would not declare Trump guilty of a crime because he’s a sitting president, and instead, would refer the matter to Congress.

If you had trouble reading and understanding that part, I broke it down here:

9/ Special Counsel detailed several instances where all the elements of obstruction were met.

Mueller referred to this as a President’s corrupt use of his authority. (See, for example, Vol. II, p 8)

Are you okay with corrupt use of authority, Senator?

10/ You said the president and administration “overwhelmingly cooperated with the Mueller investigation.”

Mueller said something else👇

Notice the part about how Special Counsel couldn't get the whole story because Trump Campaign staff deleted "relevant" communication. 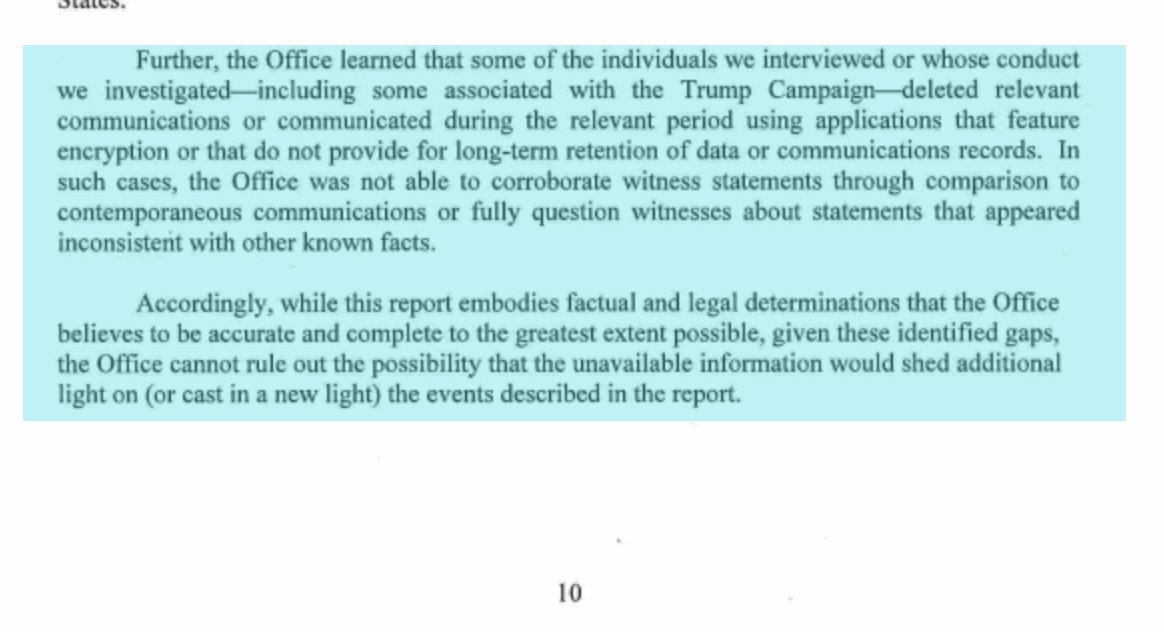 11/ Now, Senator, shall we talk about your baldfaced lies?

I’m sure you understand that the Russian propaganda method is to torpedo truth through what the Rand Institute calls a Firehose of Falsehood.
https://www.rand.org/pubs/perspectives/PE198.html …

12/ Prof. @TimothyDSnyder discusses at great length the method of autocrats everywhere, which is to undermine “factuality.”

Our task—fighting the lies—is difficult. Lies are always more compelling than the truth, because the liar is free to fashion the lies anyway he chooses.

Also lies can fit into a soundbite because you don’t have to trouble yourself with facts.

14/ Our only hope is for enough Americans to understand that you lie freely and just stop believing anything you say.

One startling aspect of the Mueller Report was how many times Mueller documented Trump’s lies.

15/ When you and your GOP pals reel off lies in rapid succession, it isn’t possible for defenders of democracy to refute each one.

All we can do is hope that enough voters understand that everything you say is a lie, tune out what you say, and read the Report for themselves.

16/ Here's why I say your lies are a bigger problem than Trump encouraging a foreign attack.

Your lies can shield Trump and encourage more such behavior in the future.

More importantly, lies like yours are capable of unraveling American democracy.