This is another big win against Republican gerrymandering in one of the absolute worst states for it. Republicans have won kept control of a legislative chamber despite losing the popular vote in 6 of the last 9 elections  https://docs.google.com/spreadsheets/d/1qTxxrLQlnrEl9ocgwUM7EL4PasH-5lmyf7sttn2GSMg/edit …

Michigan Democrats likely would have taken full control of state government in 2018 without Republican gerrymandering. This court ruling striking down these unfair districts could pave the way for a Democratic legislative majority in 2020 if upheld

Michigan voters passed a state constitutional amendment at the ballot box in 2018 to ban gerrymandering by creating an independent citizens' commission, but it won't redraw the maps until 2022, which is why this ruling is a victory for #FairMaps in the upcoming 2020 elections

This was a total victory from the plaintiffs, with the court striking down every challenged district. The first set were struck down under both the 1st & 14th Amendments, & the latter set under the 1st Amendment  https://www.dropbox.com/s/whas0yu761rmpqm/2019-04-25%20-%20Gerrymandering%20-%20ORDER.pdf?dl=0 … 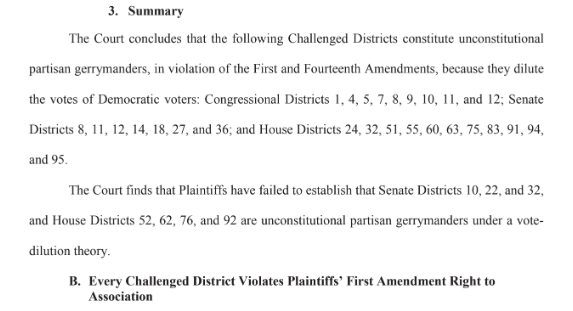 This is huge: The court that just struck down Michigan's congressional & legislative maps for illegal GOP gerrymandering has ordered 2020 special elections for the Senate, since it normally wouldn't be up for election again until after the next round of redistricting in 2022 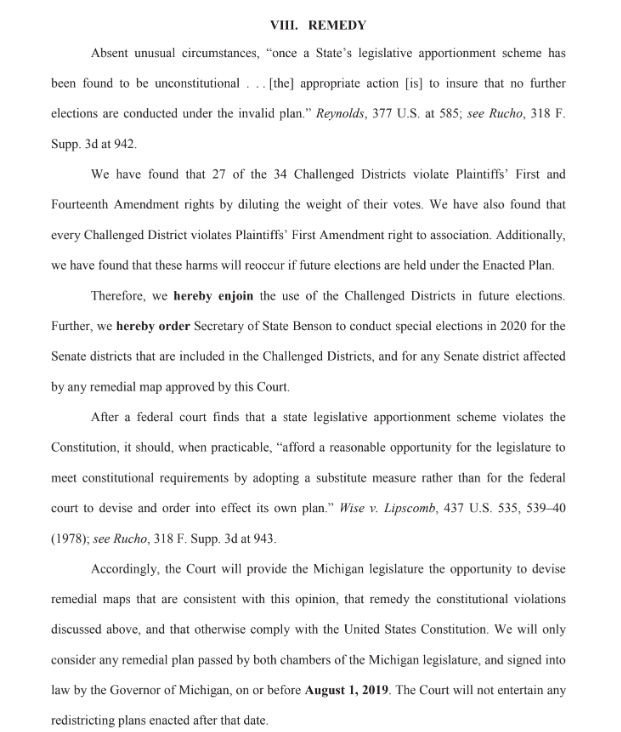 If this ruling is upheld, #FairMaps in Michigan could give Democrats a chance to win full control of state government in 2020. That would be their first unified govt in nearly 4 decades, something GOP gerrymandering likely cost them in 2006, 2008, & 2018

Michigan's legislature, where the GOP holds gerrymandered majorities despite losing the popular vote in 2018, will get a first shot at redrawing the maps. But Dem Gov. Gretchen Whitmer could veto replacement gerrymanders, meaning the court would draw fairer districts instead 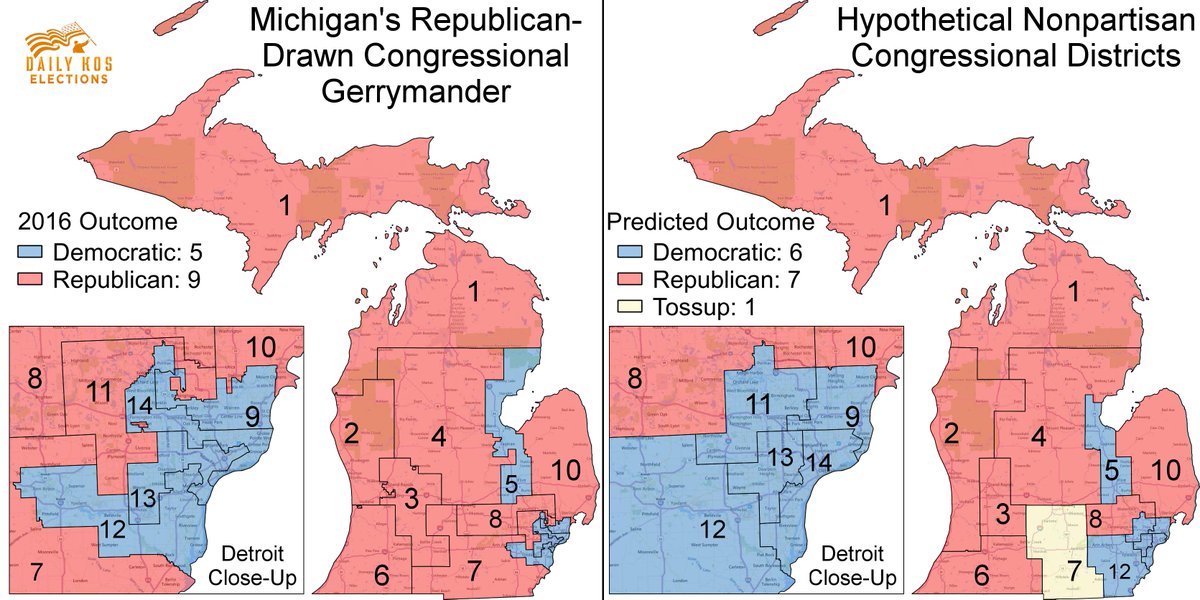 Here's how a nonpartisan Michigan congressional map could look if this ruling survives & requires fairer districts for 2020. Dems would likely have little trouble holding onto 7 of 14 districts, in sharp contrast to 2012-2016, when gerrymandering gave the GOP a 9-5 majority 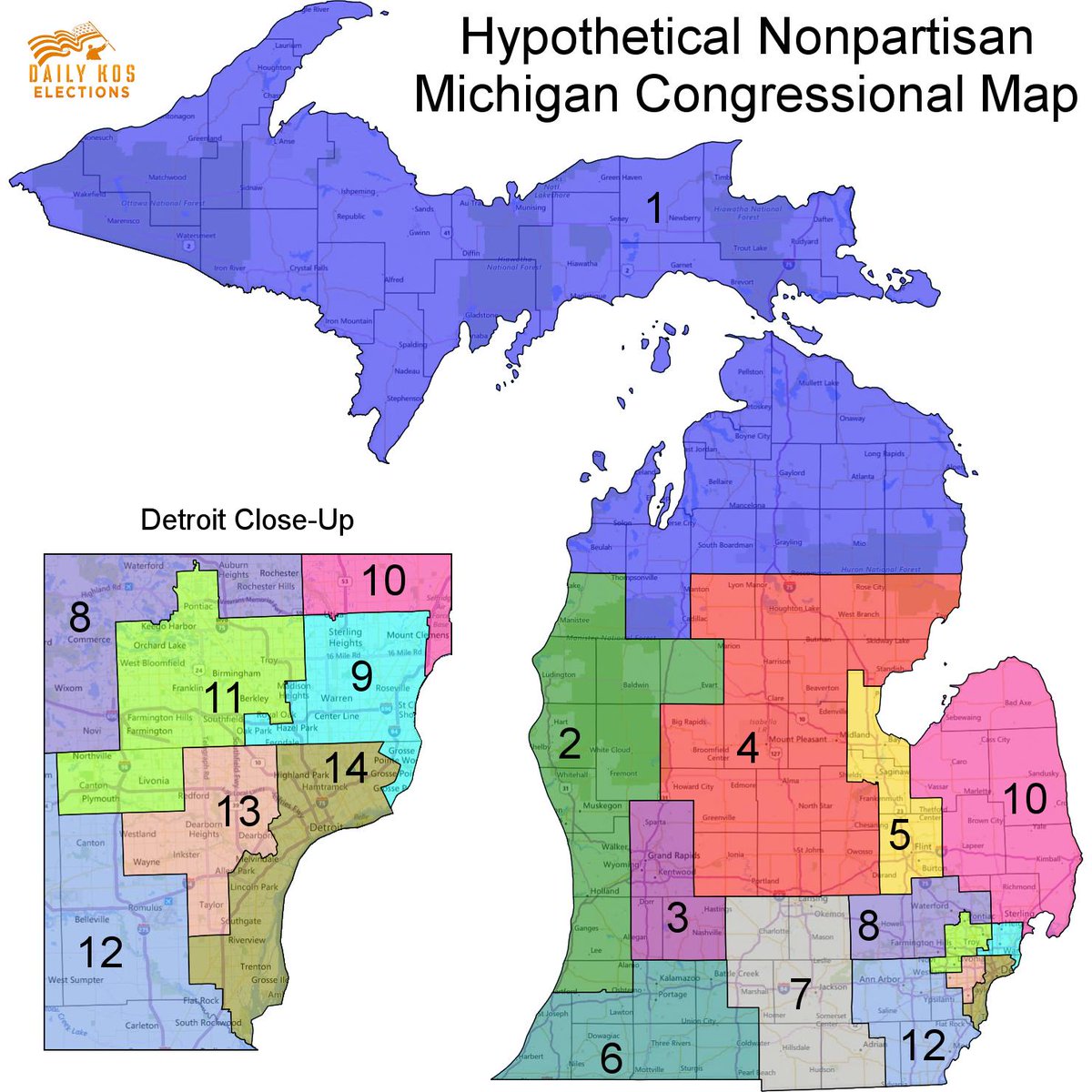 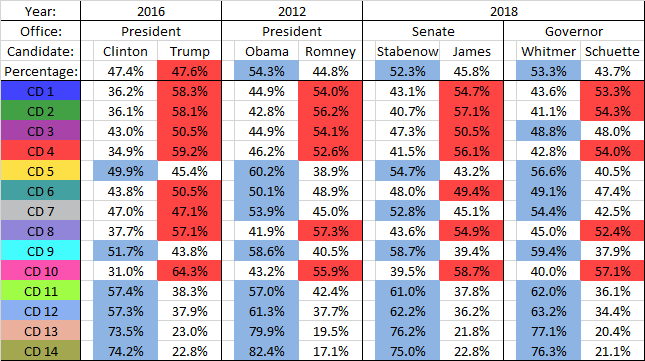 Unfortunately, there's a real risk that this ruling gets overturned thanks to the partisan Republican majority on the Supreme Court. We'll have more insight on that likelihood by June after the court rules on two key cases on Maryland & North Carolina partisan gerrymandering

State constitutions are a crucial protection against GOP gerrymandering when the U.S. Supreme Court won't act. Michigan voters recognized this when they created an independent redistricting commission, & these 2020 state supreme court elections will be key

This map shows the 10 Michigan state Senate Districts & 15 state House districts that a federal court struck down earlier today (along with 9 congressional districts) because Republican gerrymandering violated the Constitution. My story on it is here:  https://www.dailykos.com/stories/2019/4/25/1853150/-Court-strikes-down-Michigan-GOP-s-gerrymanders-and-orders-fairer-House-and-legislative-maps-for-2020 … 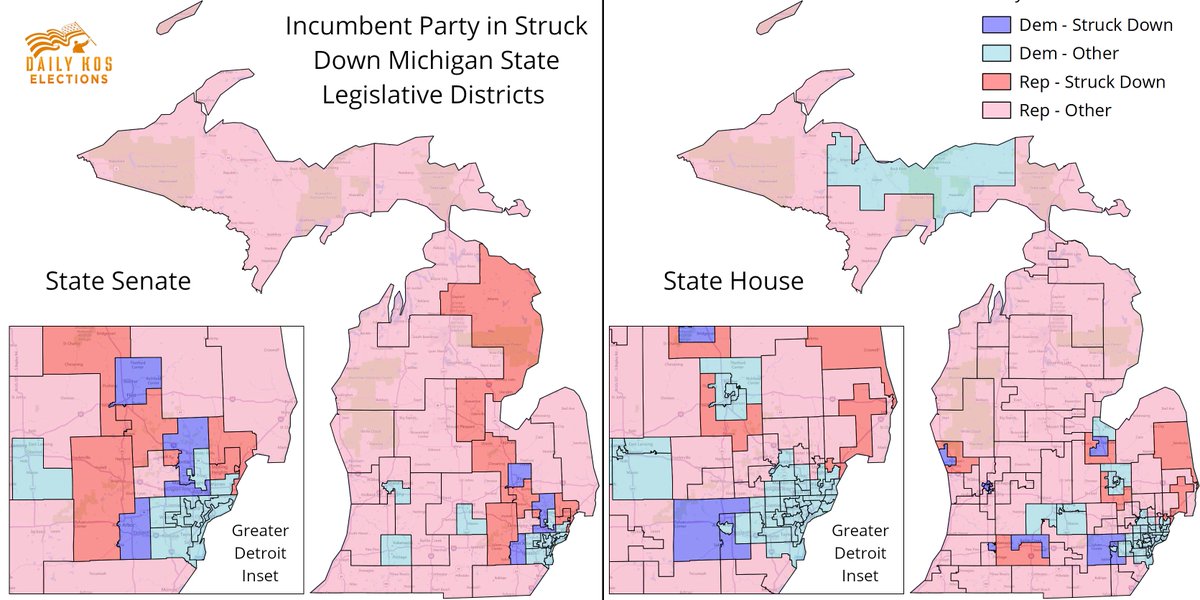