Tribe and Matz👇 explain what constitutes an impeachable action:

An impeachable action is one that involves "corruption, betrayal or abuse of power" that is serious enough to "subvert the core tenets of the U.S. governmental system." 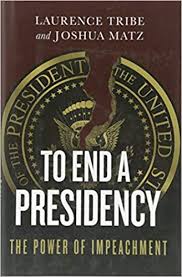 This is because (1) the criminal code isn’t designed with presidents in mind and (2) it isn’t possible for legislatures to foresee all possible ways a president might engage in corruption that threatens the government.

Trump will lie and use his power as president to obstruct the impeachment proceedings.

3/ We can expect this surely as we expect the sun to rise.

That depends on what you mean by "succeed."

Trump is likely to remain president until 2020 simply because 2/3 of the Senate is required for removal. This Senate is unlikely to remove.

(Legislators using these words too soon is like a judge announcing "guilty" before the trial.)

We are still at the public hearings stage.

Of course he is! What does he have to lose at this point? He knows he has rabid support among his base.

7/ The House and the Executive Branch are now in battle.

One battle is over Barr’s testimony.
Another is Erik Prince:
And Trump’s lawsuits to avoid his records going to Congress:

With 2 branches in battle, the 3rd will weigh in.

8/ Someone yesterday told me Trump has already turned the U.S. into an autocracy.

I say our institutions holding out, despite several years of Trumpian onslaught.

Six months ago, we had meaningful elections. (Those don't happen in an autocracy).

9/ Yesterday the DC Court of Appeals ruled for Mueller, against Andrew Miller, who has been fighting a subpoena.
https://www.politico.com/story/2019/04/29/robert-mueller-roger-stone-associate-court-ruling-1292498 …
Yesterday the NY AG, who is suing the Trump Foundation for “persistent and willful self-dealing” made this statement:

These are federal courts ruling against Team Trump.

So how do we respond to the frustrating situation of Trump obstructing these proceedings, and the slow grinding pace of democracy?

If you don’t believe democracy always grinds slowly, run for local office and try to get something done.

12/ Those who want to destroy democracy attribute the slow pace of democracy to “corruption.” Don’t listen to them. It's easy to become frustrated with the slow workings of democracy, but having a democracy is worth the aggravation.

13/ I’ve had people tell me that we can’t wait until 2020 to remove Trump. I also get comments like this one:

There are very few legal means to remove a president before the end of his term.

I think it goes without saying that we must stay within legal means.

14/ The only way to save democracy is through democratic means.

So how do we respond to the frustration and survive until 2020?

Please see my thread on the Outrage Dilemma👇


Also avoid “what if” rabbit holes. They will wear you out.

15/ For those who say, “We never had a president trample norms or human rights this way,” my answer is: “Let me tell you about Andrew Jackson.”

This isn't to minimize the human rights violations and norm violations of Jackson or Trump.

It’s just to say we’ve been here before.


Remember, Trump is working hard to wear you out and cause you to lose faith in democracy. That's how he will win. Don't let him do it.

I'll answer a question.
Technically the House can impeach more than once. As a practical matter, it would be a disaster. Consider finishing the lengthy process, the Senate acquits, and the House says "Wait! Let's do it all again! We have more evidence."

Another comment.
It's possible that public opinion will turn on Trump as proceedings continue, but there's a problem with comparing to Nixon.
Nixon didn't have Fox. It's been said that he would have survived if he had right wing media, and in fact, it developed because of Nixon.