I keep returning to this, because the stagnated productivity growth is the most misunderstood issue in the world economy at the moment.

This tells us that something has gone seriously wrong, as productivity should grow during expansions. 1/
@GeoffCutmore @CNBCJulianna 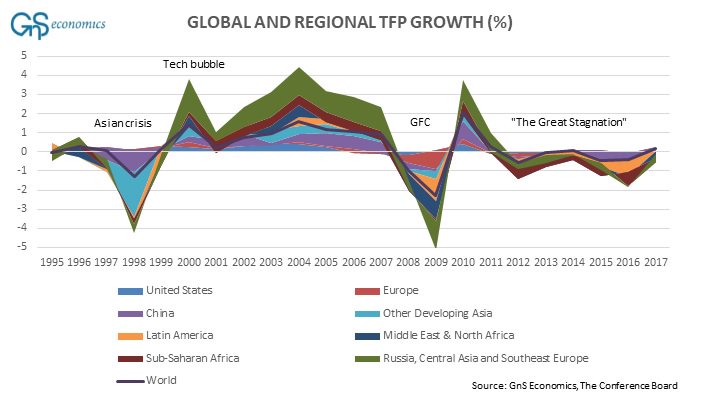 We discovered this about 1½ years ago, and have been analyzing it ever since.

Our analysis has led us to the core of the modern macroeconomics. It seems that bank bailouts and low interest rates have basically led to the breaking down of the process of creative destruction. 2/

This is something that modern macroeconomics has failed to acknowledge mostly because economies are assumed to sustain growth momentum. The only things that has thought to require adjusting are the 'shocks', i.e. recessions and crises. 3/

The thing is that since early 2000's, we have known that this basic assumption of modern macro is false.

The bailout of the Japanese economy after its crash in early 1990's brought this into light, also in academic research. 4/
https://gnseconomics.com/en_US/2019/03/18/the-world-economy-the-way-of-japan/ …

This process has been coined as 'zombification' of the global economy.

We do not yet know how wide-spread this "zombie problem" is, but it may be very extensive. Academia is slowly waking into this, but the damage has already been done.