(EXPLAINER) Dimitri Simes, Ed Cox, Carter Page, and George Papadopoulos: four men tied together by the Kremlin-linked Center for the National Interest in DC and the Kremlin-linked Valdai Discussion Club in Moscow. The below summary of their ties is fully sourced from major media. 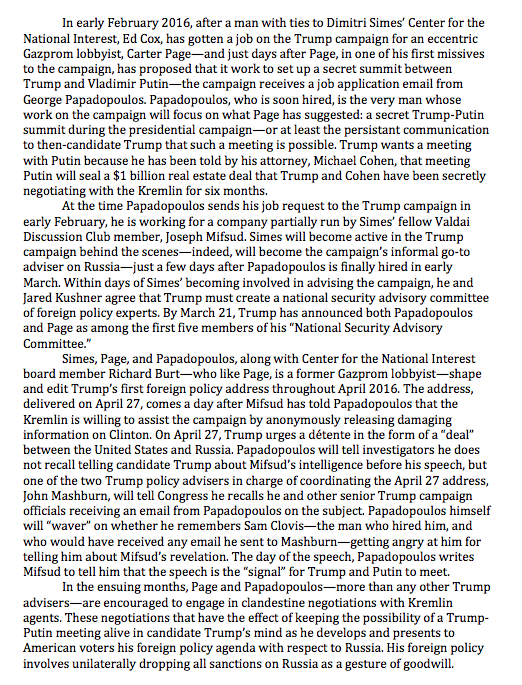 1/ If you can read the above and have any confidence that Trump's Russia policy wasn't the result of machinations by the Kremlin—via Putin "friend" Dimitri Simes—and not see a fact pattern indicative of an underlying bribery, you've read more than the 2,000 police reports I have.

2/ We wondered how and why a whack-a-doodle like Page got a campaign job, or why a desperately under-qualified guy like Papadopoulos got a job. It turns out you only had to look at the Kremlin's top Moscow think tank and its top DC think tank—it wasn't more complicated than that.

3/ Incidentally, the Trump campaign's former top communications adviser, Michael Caputo, says that the man more responsible than anyone else in America for putting Donald J. Trump in the position of finally deciding to run for president was...

4/ If you *really* want your mind blown, how about this: Dimitri Simes was friends with Richard Nixon, and was given his job at the CNI by Nixon himself (back when it was called the Nixon Center). Want to know who Nixon's son-in-law is? Ed Cox.

5/ I really hope you'll RETWEET the first tweet in this thread. Anyone who spends the 5 minutes it takes to read this "explainer" is going to ask themselves—as I and many others are asking ourselves—what the *hell* is going on? Why have we not already had public hearings on this?

PS/ This "explainer" is the tip of the iceberg—the shortest possible explanation of the connection of these four Kremlin-linked Trump advisers. The full story...it's twenty times longer, and again, all fully sourced. What I was trying to do was write the shortest summary I could.

PS2/ My favorite fact that I left out: in the 30 days after Mifsud told Papadopoulos of the Kremlin having Clinton emails, Papadopoulos twice told a *total stranger from a foreign country* this info, but implies he never told the supervisors he wanted to get a permanent job from.

PS3/ Papadopoulos ultimately had a 6 month-long record of checking in with the campaign whenever he had any info at all, and sometimes even when he had no new info. And he's a convicted liar. *No one* believes he didn't tell the campaign. I bet he told them same day, pre-speech.