Jennifer Gunter @DrJenGunter The Gray Lady’s gynecologist (@NYTStyles), sexpert, appropriately confident, lasso of truth, I speak for no one but me. The Vagina Bible (8/27), Jensplaining. May. 08, 2019 4 min read

I was very ill about a day after my c-section. I had an infection in my uterus, so everyone should have expected I could get sicker. I was on antibiotics and spiking high fevers. 2.

I had a super fast heart rate, low oxygen on room air, and was developing acidosis. I was put on oxygen. No one checked to see how I responded. The work up for a blood clot was negative so it seems it was a 🤔 3

The 2nd night I was so ill. Shaking chills and drenching sweats. Having a hard time breathing. I called my future ex husband and told him I was dying. He accused me of being hysterical as my babies were in the NICU. 4

Saying “I am dying” is actually a sign of sepsis. And let me tell you all the primitive alarm bells are sounding because the ship is fucking going down and your body knows it. When someone says they are dying believe them. 5

So I called the nurse. She gave me a blanket when I had chills and ice when I was burning up. My bed was soaked with sweat and oh my fucking god the pain. As bad as when I had a ruptured spleen. Blankets and ice don’t treat sepsis FYI. 6

Several people who saw me, doctors and nurses, thought I should be getting better so when I wasn’t (despite objective evidence that was ignored, fever, low oxygen) the answer was my hysteria. Or that any minute I’d turn the corner. 7

I was hysterical, I would like to point out, because I was dying. 8

I sweated and shivered the whole night. I had a hard time breathing. I basically willed myself to see the morning. I could not have walked out of my room for help. I told myself you can’t sleep. You’ll die. 9

In the morning I screamed hysterically that I needed more intensive care, imaging to rule out an abscess, and an ID consult. I was hysterical. I mean I screamed. A lot. 10

I got oxygen, intensive nursing and guess what? The E. coil in my blood was resistant to the antibiotics. Antibiotics were changed, I got supportive care, and I gradually got better. 11

My case demonstrates failure to escalate. Nurse to OB/GYN as well as OB/GYN to ID or intensivist. Also, multiple people - family, doctors, nurses - thinking I was hysterical when I was *blinks* dying. 12

Computer hard stops might have helped. Such as forced escalation and alerts. Also, many times colleagues are fails to refer because they are worried the specialist will look down on them for not knowing. We need drills so everyone knows how to handle these events. 13

No one rechecked my blood gases after I was initially put on oxygen to make sure I wasn’t deteriorating. Young women look pretty good, medically speaking, right up until they die. Labs can help. 14

And being labeled hysterical. I mean my own future ex did! So if no one believed me when I said I was dying just imagine what it is like for people who don’t know the hospital system, are ignored because of racism, or don’t know how sick they are because the’re not a doctor 15

And I was a very healthy person. Because of poverty and racism many women going into hospitals have health challenges that even put them at greater risk. 16

When anyone postpartum tells you they are dying — I mean I hope we get to every woman before then — for God’s sake believe them. 17

For the medical folks out there by HR was 117, my PO2 was 49 on room air before the first and only blood gas. I was a 37 year old runner who had never smoked. 18

You know what sucks. I included my PaO2 and HR because even now I was worried I will be labeled hysterical. But here, here is objective proof I was as sick as I said. 19

We need sepsis drills, cardiomyopathy drills, pre eclampsia drills etc. we need to identify high risk patients, but understand anyone can be high risk. Also, we need to care at least as much about moms getting out of the hospital as we do their milk coming in 😒 21

Please it’s TIME we all learned these signs of sepsis. Speak up if they are affecting you or someone else. And medical professionals, failure to consider sepsis, anchoring to another diagnosis, failure to escalate, not listening. We are all guilty. 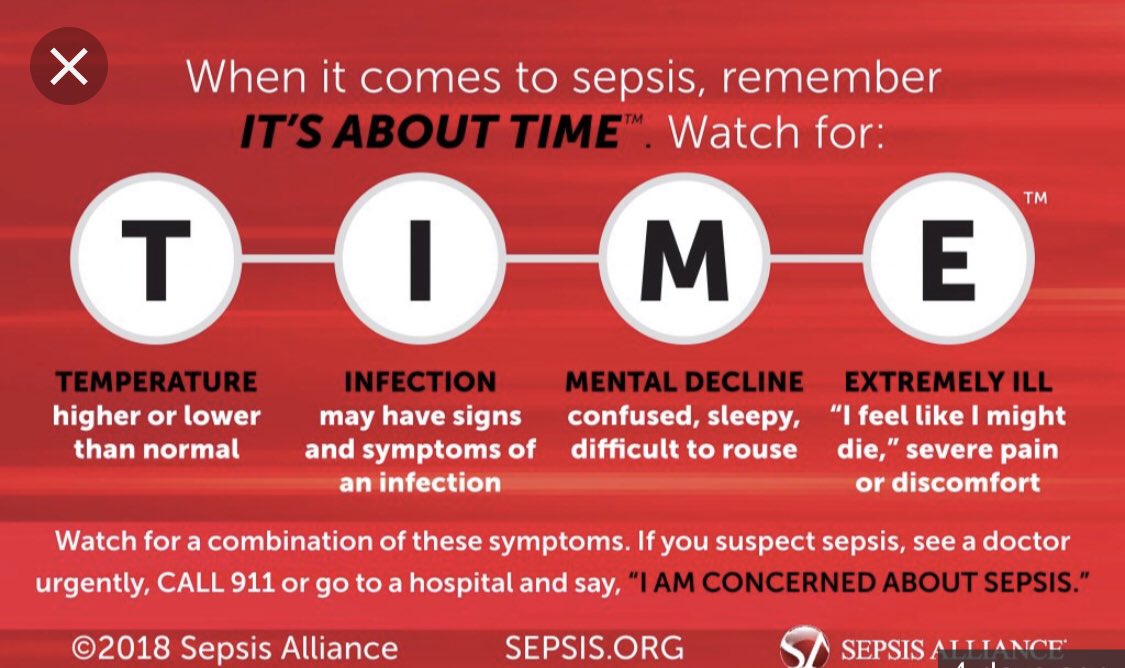