Will Oremus @WillOremus oh-REE-mus. Senior writer for OneZero at @medium: onezero.medium.com/ Previously: @slate. I write about how tech shapes us. DM for Signal. May. 17, 2019 1 min read

I argued last year that the scandal over your phone's location-tracking data, broken by @nytimes, @motherboard, et al., should be bigger than Cambridge Analytica:  https://slate.com/technology/2018/05/the-locationsmart-scandal-is-bigger-than-cambridge-analytica-heres-why-no-one-is-talking-about-it.html … (1/3)

A year later, we find that the FCC investigation appears to have gone nowhere, and chair Ajit Pai won't tell anyone what's going on with it—not even his fellow FCC commissioners.  https://gizmodo.com/ajit-pai-warned-lying-to-congress-is-a-federal-crime-a-1834799010 …

Now the statute of limitations may be in danger of expiring, and Pai is trying to shift the blame to a new FCC commissioner, onto whom Pai tried and failed to offload the investigation in February. That commissioner says he declined bc it didn't seem to be proceeding properly.

(Sorry this is taking more than the 3 tweets originally promised. You should really just go read the whole piece by @dellcam but I'll try to wrap up my summary in one or two more. Here is the piece, go read it!  https://gizmodo.com/ajit-pai-warned-lying-to-congress-is-a-federal-crime-a-1834799010 … )

Now Pai is insisting to Congress he never withheld info from his fellow commissioners—which it seems pretty clear he did—yet he still won't promise to give them the info! A fed-up Rep. Eshoo warns him that "lying to Congress is a federal crime." 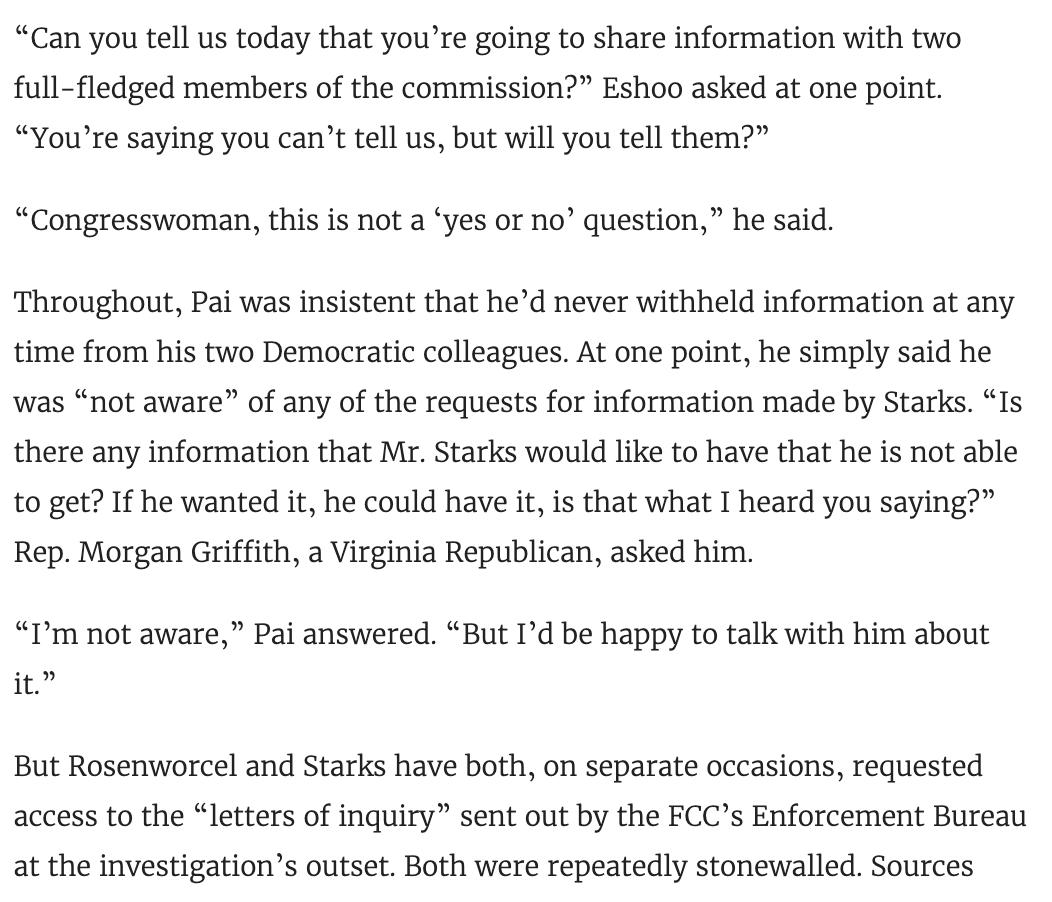 What could explain this bizarre behavior by the FCC Chair? No one knows! But hey, just by the way, he used to represent the company at the heart of the scandal. This story is weird already, but has the feel of one that could yet get weirder—and bigger. (fin)