1/ The big failure in #GoT finale was yada yada-ing of post-war power/statehood/allegiance. These notions underpinned the entire show/books, GRRM’s very interest in writing epics.

To point, his core criticism of LOTR was Tolkien’s conflation of a “just king” w/ a "good king"

3/ But at the end of the show, all kingdoms and provinces but The North are simply cool with submitting to the rule of Bran Stark, with no debate nor concern for consequences. Several Kingdoms are just reassigned.

This betrays the show’s logic, principles and recent history.

4/ Dorne was the last to join the Seven Kingdoms (they resisted for 150 years after Aegon’s Conquest! Despite dragons!) They acceded via marriage + promise of independence (hence “Prince” v Warden titles).

They had no participation in the wars against The Night King or Dany...

5/ By time of the council meeting, they have a full unharmed army, they’re protected by a shield of mountains that held off Targaryen dragons for decades, no relationship with the Starks and a deep history of independence/betrayal (hence Robert's Rebellion)

But they just accede.

6/ Even after The North says “nah, thanks” they’re still okay with submission. And it’s not as though an independent North would have even tried to invade Dorne for The Six Kingdoms (nor would Bran try - nor did he even have an army left...)

7/ The Iron Islands took a deal with Dany for quasi-independence, then were independent in the weeks after her death and disagreed with Jon’s amnesty for killing the Queen.

Then they just accede to Bran Stark’s rule - even as Sansa frees The North!

8/ Dany gave Gendry one of the Seven Kingdoms, then she is overthrown. Yet after her death, he simply walks into Storm’s End (which he’s never seen and no one even knows of him) and becomes it Lord. And everyone is cool with it. There's not even a King or Queen at that time!

9/ And Bronn got The Reach (another Kingdom’s Seat)… because the dead traitor Jaime, jailed traitor Tyrion previously said he could (at arrowpoint) when Dany won? It wasn't even their's to give.

And he gets it with no leverage, no allies, no proof, no relationship to king?

10/ The very idea of who gets what after a conquest and battle was central to governing policies and fealty. You ask your lesser Lord to fight for you, you reward them and their people for losses. Yet all the lesser Lords are just cool with this and their leaders' submission.

11/ We saw how nasty this was over and over with the Karstarks, The Boltons, The Lannisters, The Freys. You can’t just give up kingdoms and castles, that prompts multi-generational conflicts.

12/ That’s without getting to the fact that Jon, the rightful king, killed the tyrannical prior Queen (who had a worse claim), and thus forfeit? This is literally how it works in history, and in GoT. And he’s banished?

13/ He’s also banished to keep peace with the Unsullied… who leave Westeros altogether. Keep in mind, too, Jaime killed the prior King too – and he stayed as Head of the Kingsguard!

Why? Because his sister was Queen. Power rules.

14/ These are all individual plot nits, but the macro story is that the show ended with nothing to say on the very issues that drove the rebellion, the War of (Many) Kings, The Boltons (and Karstarks and Freys) to betray the Starks, and so on

15/ In the show and the books, peace is temporary. Independence and chaos is an opportunity for ascendance. It didn’t matter if one’s ancestors got along with a rival Lord or Kingdom, or were conquered. When the opportunity arises, conflict and betrayal happens. That’s the point

16/ How do each of the “Kingdom’s” leaders return to their provinces/Lords and justify their submission, especially after the North separates and no succession plan set? King’s Landing has no army, no authority. Any rebellion would be unchallenged.

17/ It’s fine to want a quick ending and a clean ending. But this is deeply inconsistent. It instills the very issues GRRM criticizes about LOTR. 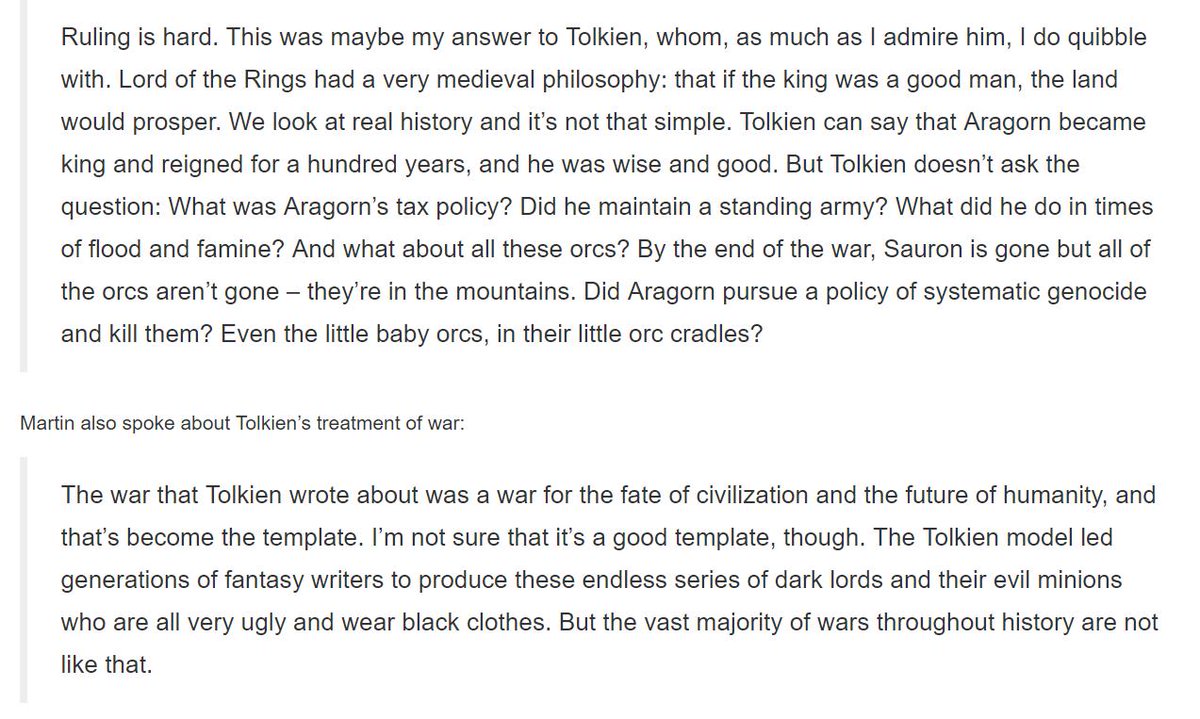 18/ The only consistent read of the show's lessons and end state is that Westeros becomes a federated kingdom of independent states. More likely is that multiple kingdoms promptly rebel and incur internal civil wars between their houses, if not immediately, within 3-5 generations