Because my thoughts on @naomirwolf's @ViragoBooks Outrages are scattered in threads, and I'm being asked about details, I thought I would put them all in one place. Hope everyone thinks this is okay. You'll find our @BBCFreeThinking interview here.  https://www.bbc.co.uk/programmes/m00057k4 …

For the record: Outrages says that the Victorians executed men for having sex with each other. This is a big claim that goes against every history of the subject I have read, and it is wrong. No Victorian man was ever executed for sodomy.

What I thought I would do is pick a short passage from the book (pp. 71-2) and go through it in detail. @naomirwolf is taking a second look at her work, and, I think, with great generosity, has offered to share her findings as she goes. This is pretty decent of her, I think.

Very few of these cases were reported, so this was a very faint drumbeat. In 1858-60, there were only 8 successful prosecutions for sodomy at the Old Bailey. We can add 3 more if we include bestiality. Figures here:  https://www.oldbaileyonline.org/search.jsp?form=searchHomePage&_divs_fulltext=&kwparse=and&_persNames_surname=&_persNames_given=&_persNames_alias=&_offences_offenceCategory_offenceSubcategory=sexual_sodomy&_verdicts_verdictCategory_verdictSubcategory=&_punishments_punishmentCategory_punishmentSubcategory=&_divs_div0Type_div1Type=&fromMonth=01&fromYear=1858&toMonth=12&toYear=1860&ref=&submit.x=47&submit.y=13&submit=Search …

Thomas Silver, as @naomirwolf now agrees, was not executed. The understandable confusion is produced by this "death recorded" category, which is a way of acknowledging that sodomy has been a capital crime since the 1500s, but no longer enforced. Death on paper only.

So let's look at these cases. Richard Roche's case sounds consensual, but it is from 1870. Symonds was 30 years old by then, so it would not have troubled his teenage self.

If Symonds read about Silver he might have done so in the Windsor and Eton Express. Seems to be the only place it was reported. This clipping is from @BNArchive. 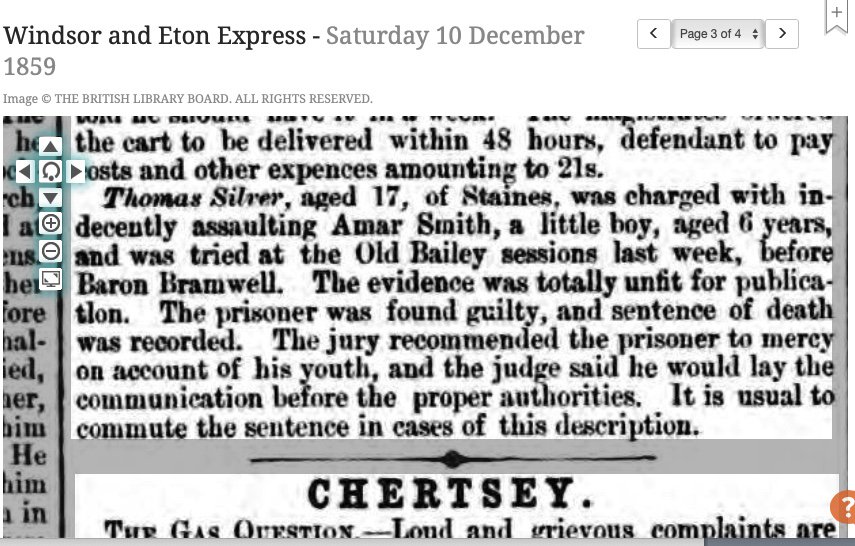 This rise in prosecutions. I think this statistic is not evidence for the big cultural turn in attitudes that @naomirwolf identifies occurring in 1857. As we've seen, the total number of successful prosecutions was 8. And the cases - what can we really say about Mepham & Dunlop?

Well, Mepham had no co-defendant. @OldBaileyOnline contains very scant information - not enough, I think, to say that this was a consensual act. Thomas Silver was a child rapist, and his name stands alone in the register, just like Mepham's. We just can't say.

Same for Dunlop: "WILLIAM DUNLOP (27), was indicted for an unnatural offence. MR. PLATT conducted the Prosecution, and MR. LILLEY the Defence. GUILTY of the attempt. — Confined Eighteen Months." Can we really be sure "the attempt" describes a consensual act?

John Spencer, though, was definitely a wrong 'un. His case was reported in the papers. He was guilty of "felonious assault" on 3 schoolboys in his care. The trails were conducted on 9 July 1860. No men were involved. Again "death recorded" does not mean execution.

The other defendants mentioned here, James Grover and Joseph Brackhouse, are both cases of what @OldBaileyOnline lists as "b—st—y". It *might* be a euphemism for consensual sex with another man, but it seems more likely to be an offence involving an animal.

So here is the next paragraph. It is not, I think, an image to which this evidence can reasonably be said to lead.

I'm really, really glad that @naomirwolf has been generous enough to revisit her research. I've devoted a lot of energy in the last 20 years to dispelling misconceptions & prejudices about the Victorians. I know that she and @ViragoBooks share this aim and will act accordingly.

I know sometimes academic disagreements can get a bit overheated - especially on twitter. I'm delighted that this one isn't going that way.