1. Lots of tweets about @maggieNYT over the past few days. Plenty of folks have weighed in criticizing her/defending her.

I want to note from the start that I think vigorous criticism is great.

But, I feel like I have to put two falsehoods to bed that have been bugging me.

2. First, I've seen some accuse Maggie of shaping her coverage to please potential sources for her book. I can start making an argument about why she doesn't operate that way, but there's no point because Maggie pulled out of her book deal months ago.

3. Yes..that book deal that was announced towards the end of 2017, that I keep seeing people reference on Twitter, she walked away from that months ago. So when people have been tweeting Maggie wrote a story to please Hope who is a source for her book, that book doesn't exist

4. Second, a bizarre/untrue conspiracy theory that I ignored for a while (II know others did too) until I saw it being shared by big accounts this past weekend. That Maggie's mom, Nancy, who is a PR exec is somehow tied to Kushner/Trump & that that impacts Maggie's coverage 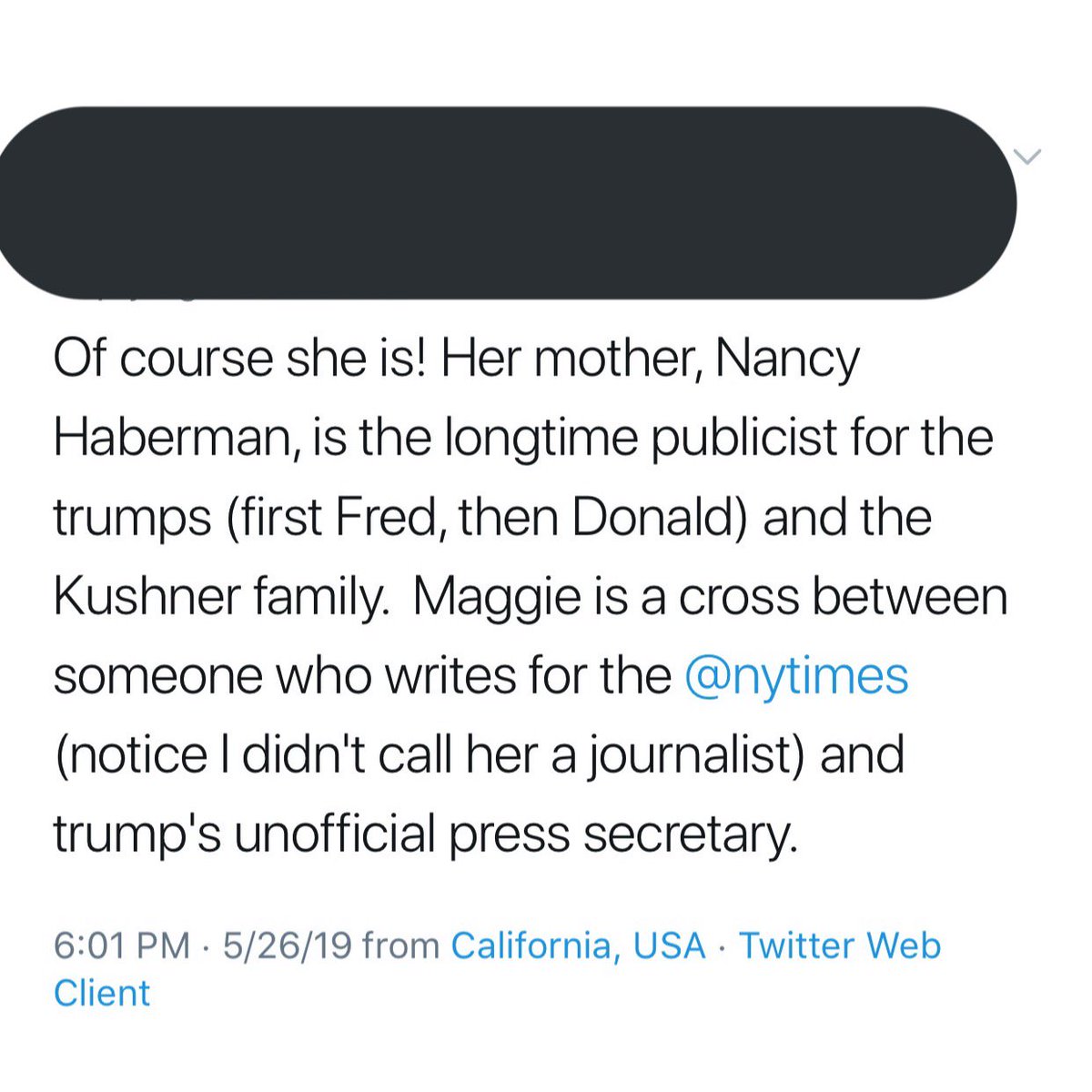 5. I want to note that lots of people who criticized Maggie over the past few days actually took a second to call this conspiracy theory dumb, but, again, it was shared by enough people I feel compelled to just explain why it's untrue and absurd.

6. Rubenstein is one of the oldest PR firms in NY and represents over 400 clients. The firm reps a wide group of clients including Jerry Seinfeld, Netflix ,Walt Disney Corp, Stand Up For Cancer, The Cher Show, NewsCorp, MOMA, and Refinery 29!

7. Rubenstein once repped Trump, but hasn't repped him in over a decade...he infamously left to return to one of his former PR guys. They stopped repping Kushner in 2012. But somehow folks think an old client relationship at a massive firm her mom works for impacts Maggie's work.

8. The Rubenstein's are prominent Dems. As an example, Steve Rubenstein donated over $31k to Clinton, most of it in the 2016 election. In fact, in 2017, Big League Politics said Maggie had ties to McMaster (who was seen as deep state) through her mom. LOL.  https://bigleaguepolitics.com/mcmaster-deputys-husband-works-reporter-maggie-habermans-mom/ …

9. Anyway, this may have been silly to some but I just feel like people should criticize someone based on facts and not silly conspiracies. And like I said, even though I may disagree with it at times, I think vigorous criticism is great.