Today’s Yearling of the Day has always been a sensitive boy. 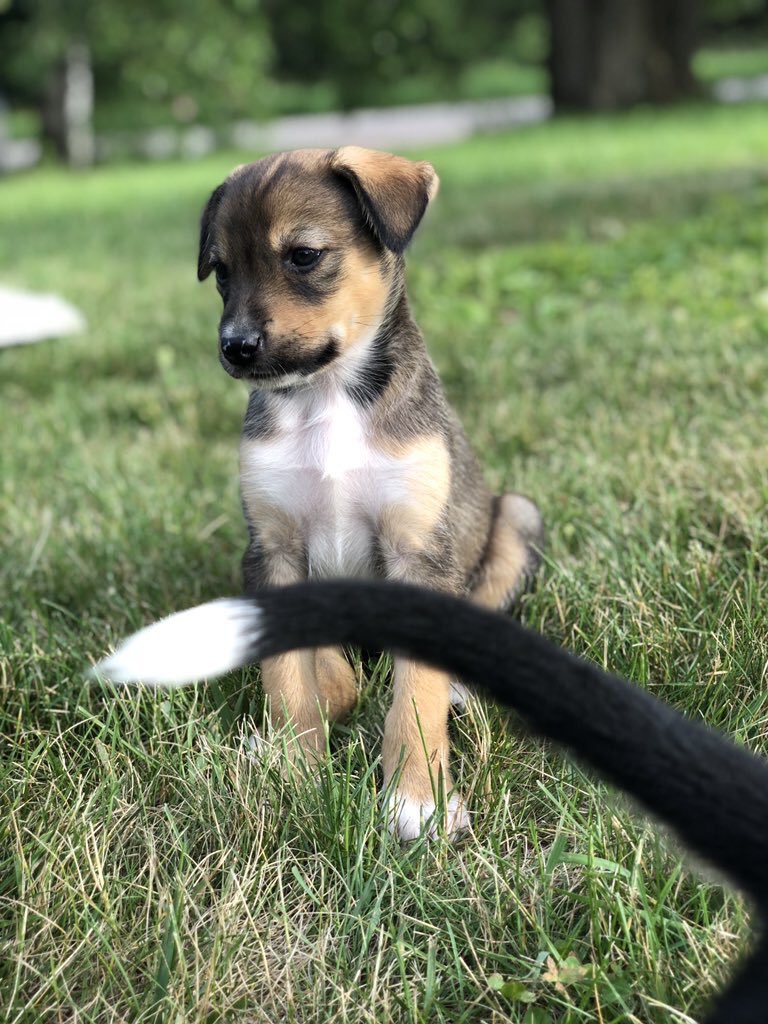 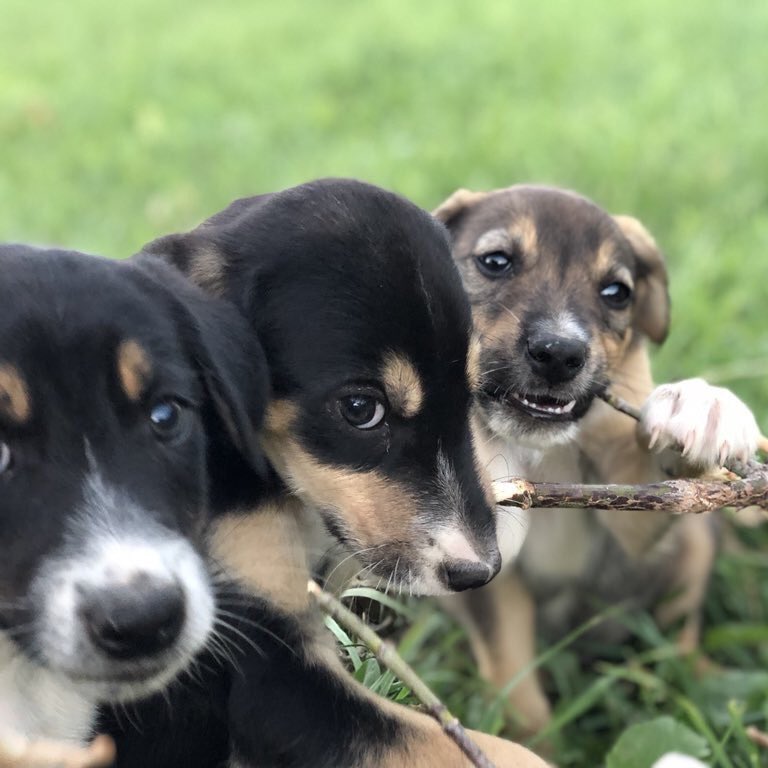 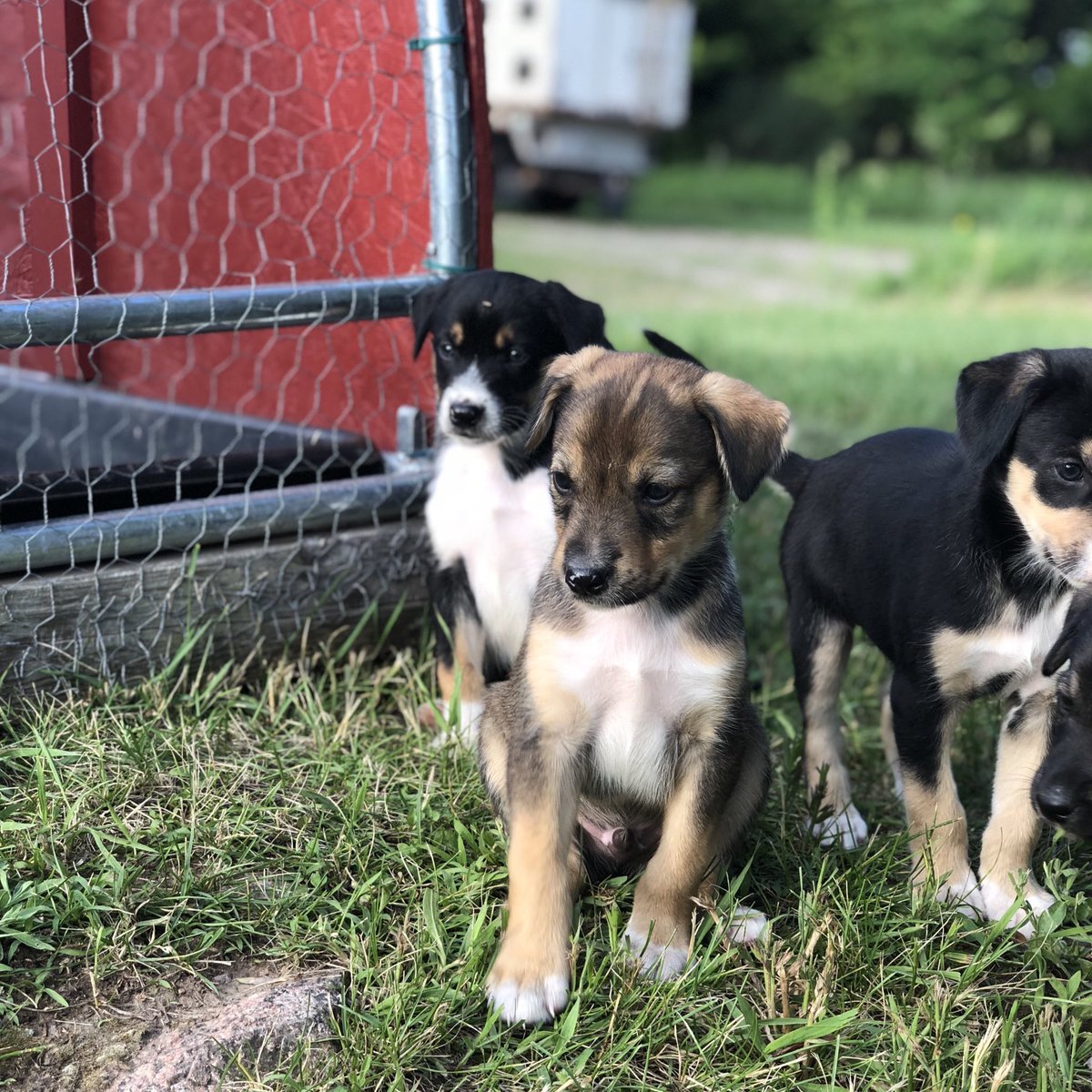 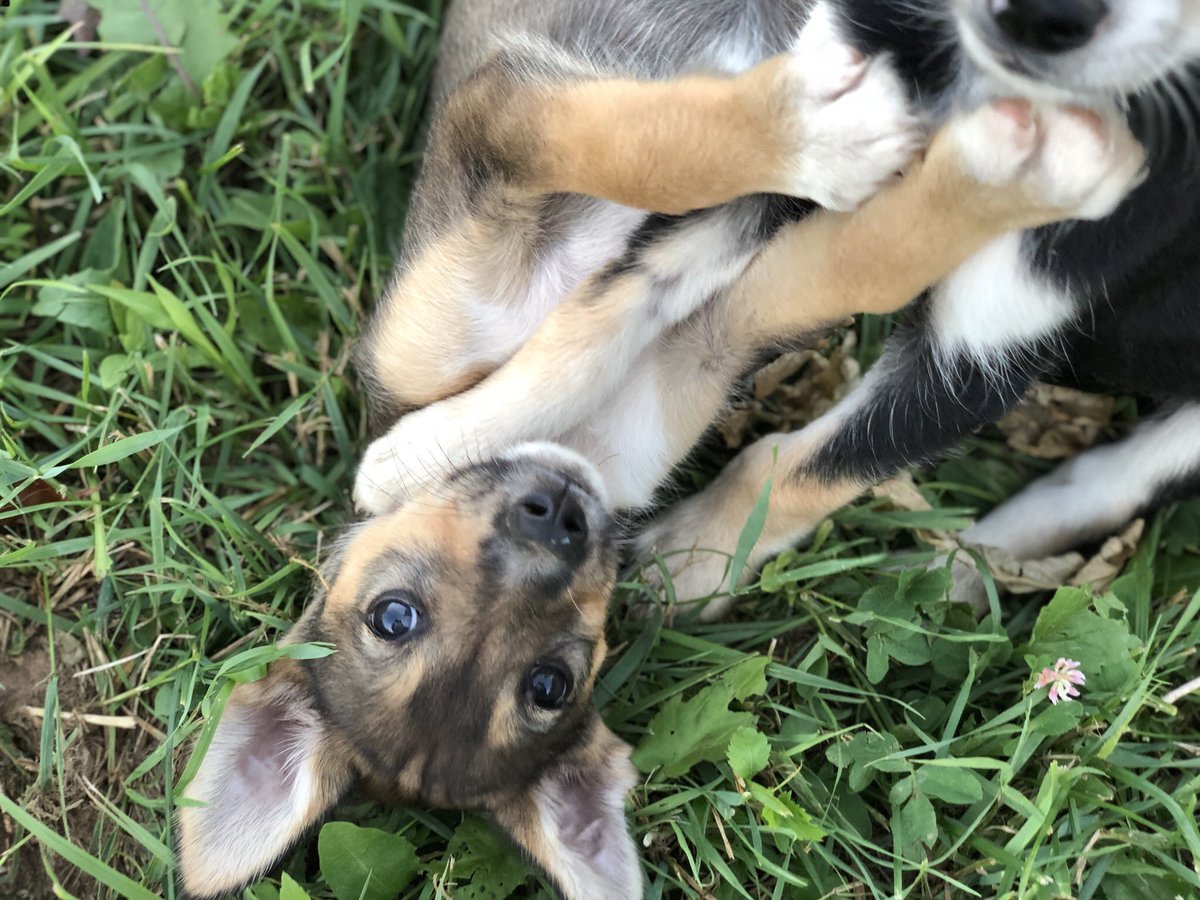 He is, and has always been, a total pleasure. 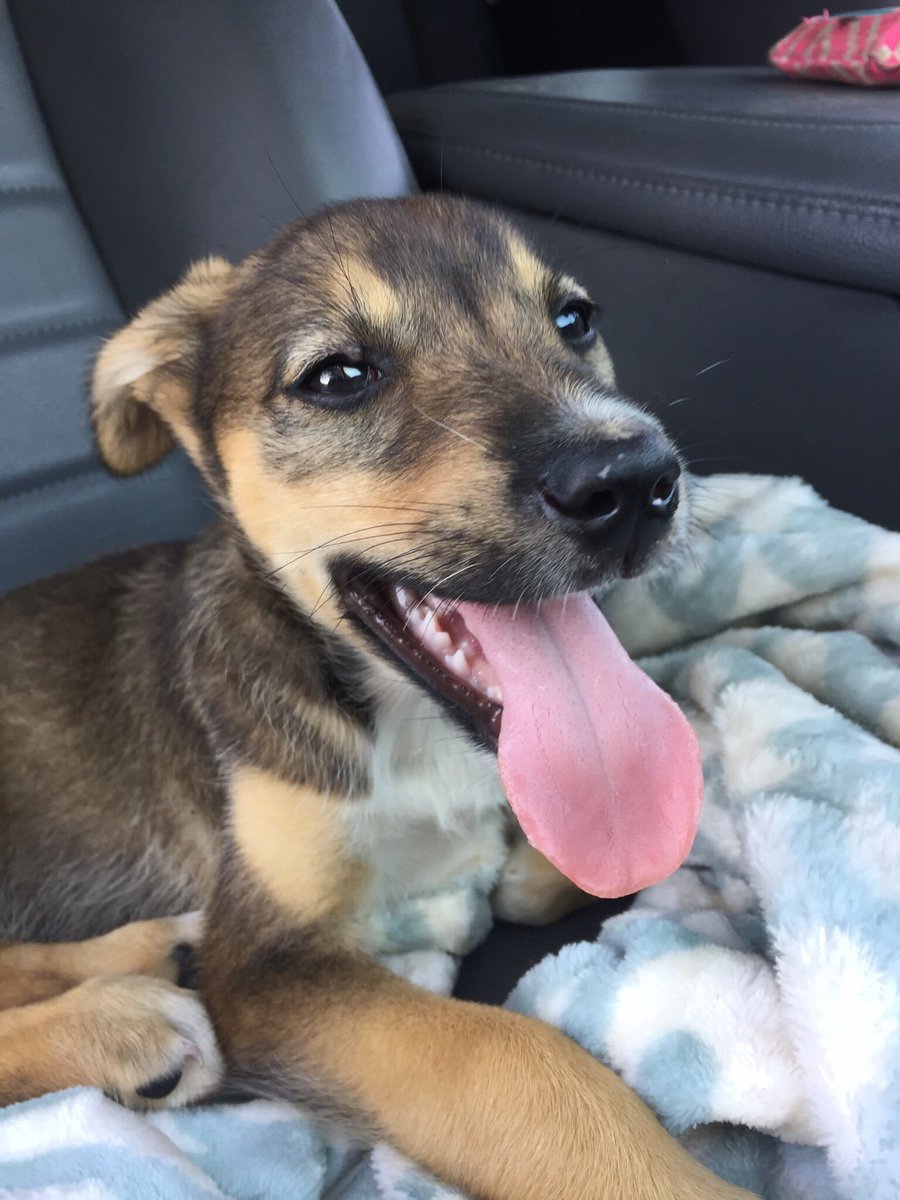 In fact, he’s been almost too good to be true. From the time he was small, he liked to come sit on the porch with Jenga and Flame, cautious without being fearful, exploring without getting into trouble. 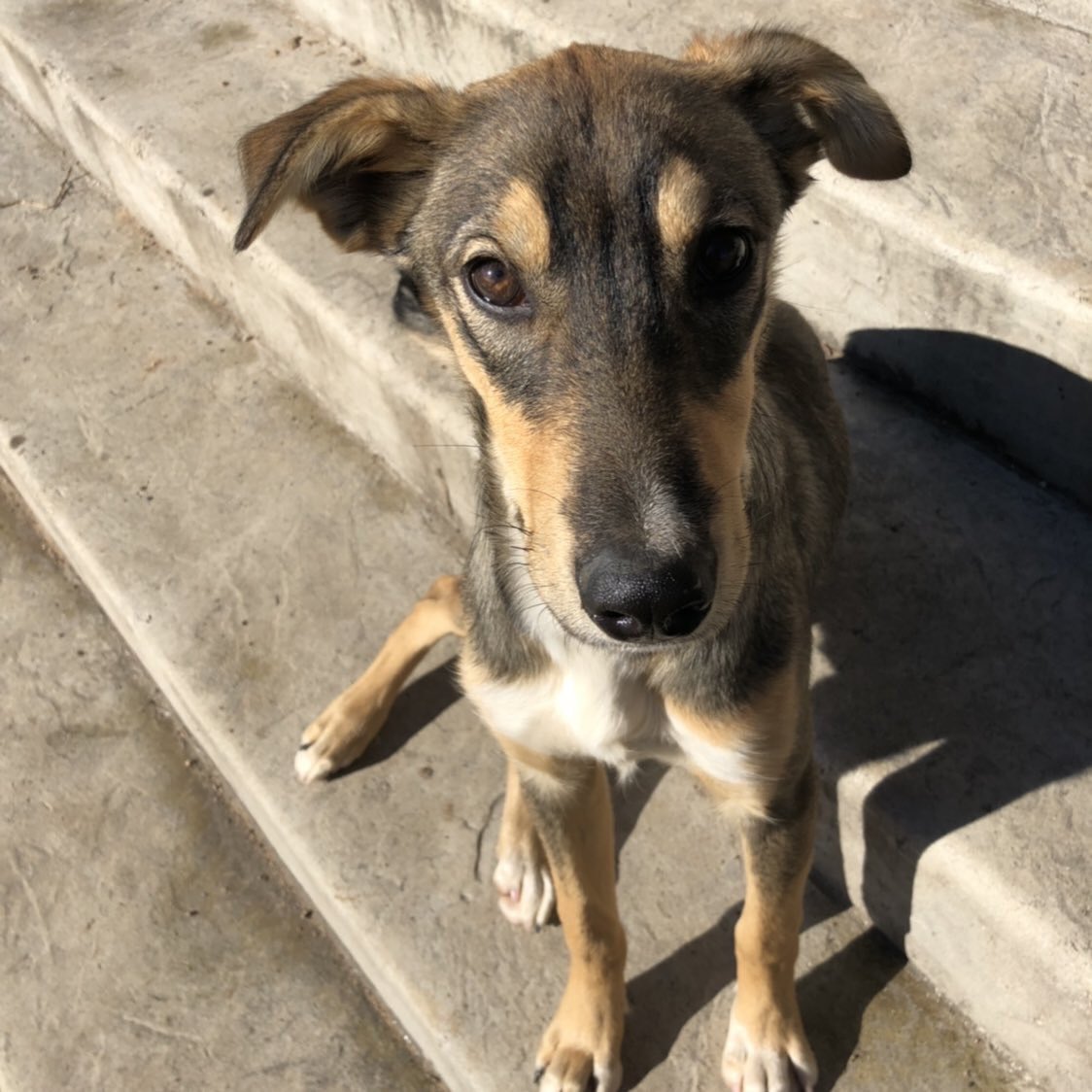 His name is Weegee.

And it’s a good thing he’s so polite, because fences cannot contain him. 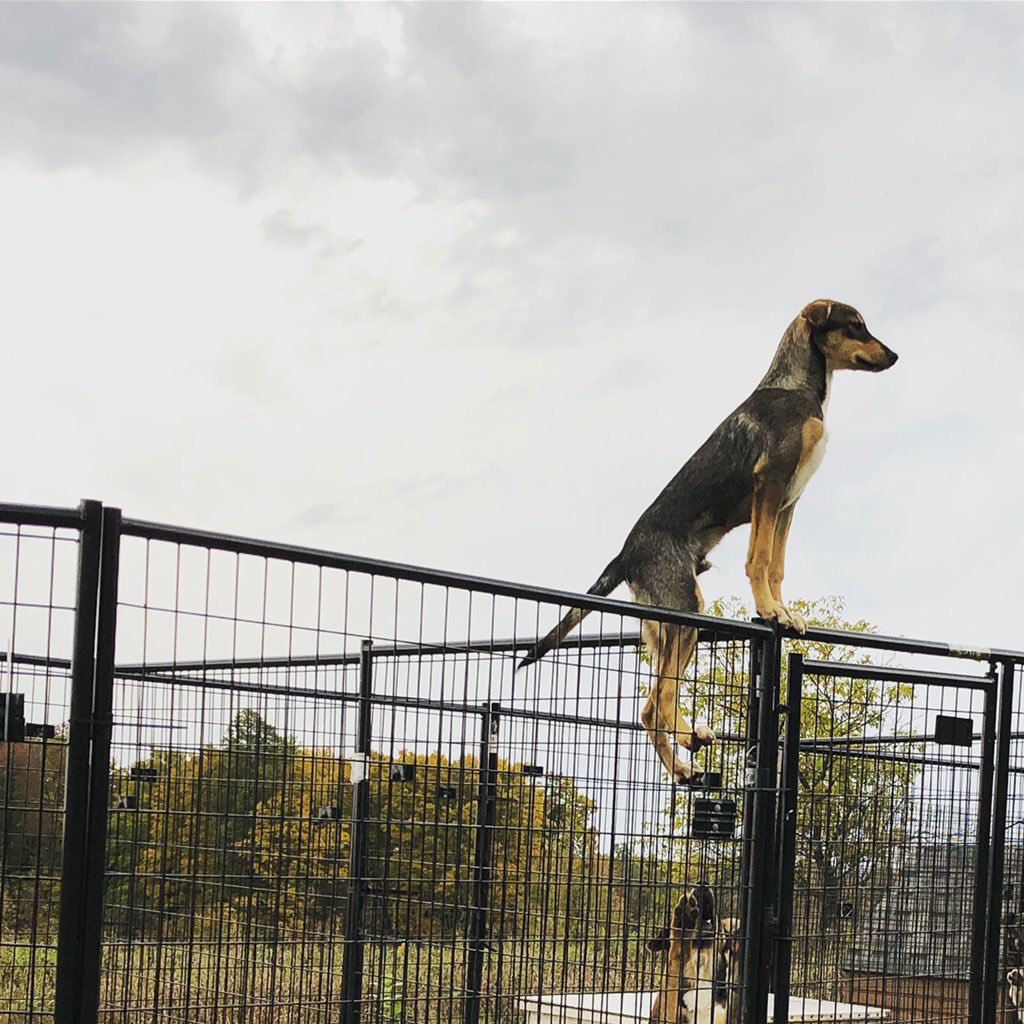 Seriously, Weegee laughs in the face of fences. 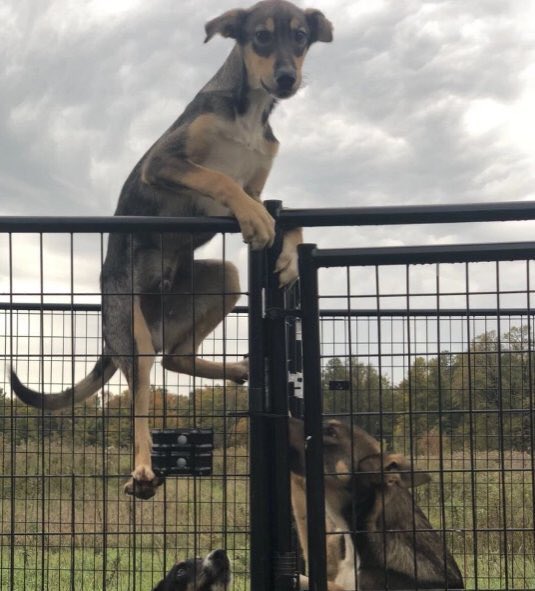 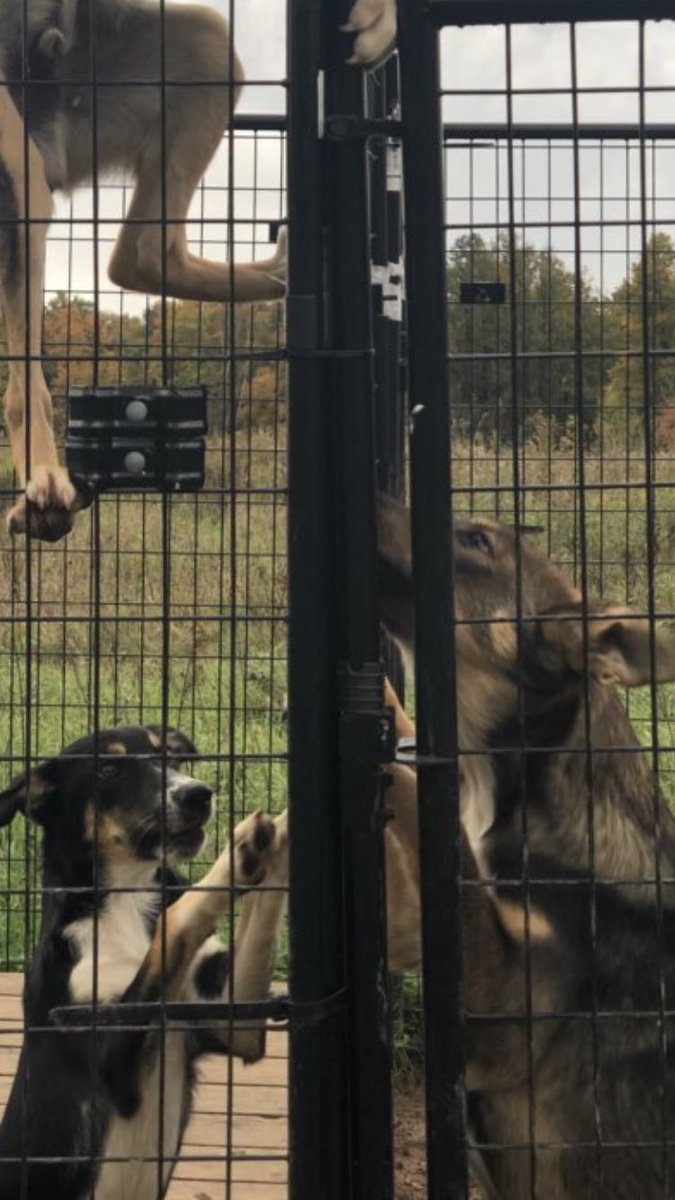 As he grows, he’s kept his mellow attitude. Here’s @CharlotteCox329 giving him a boost when he was shy about walking past the big dogs. 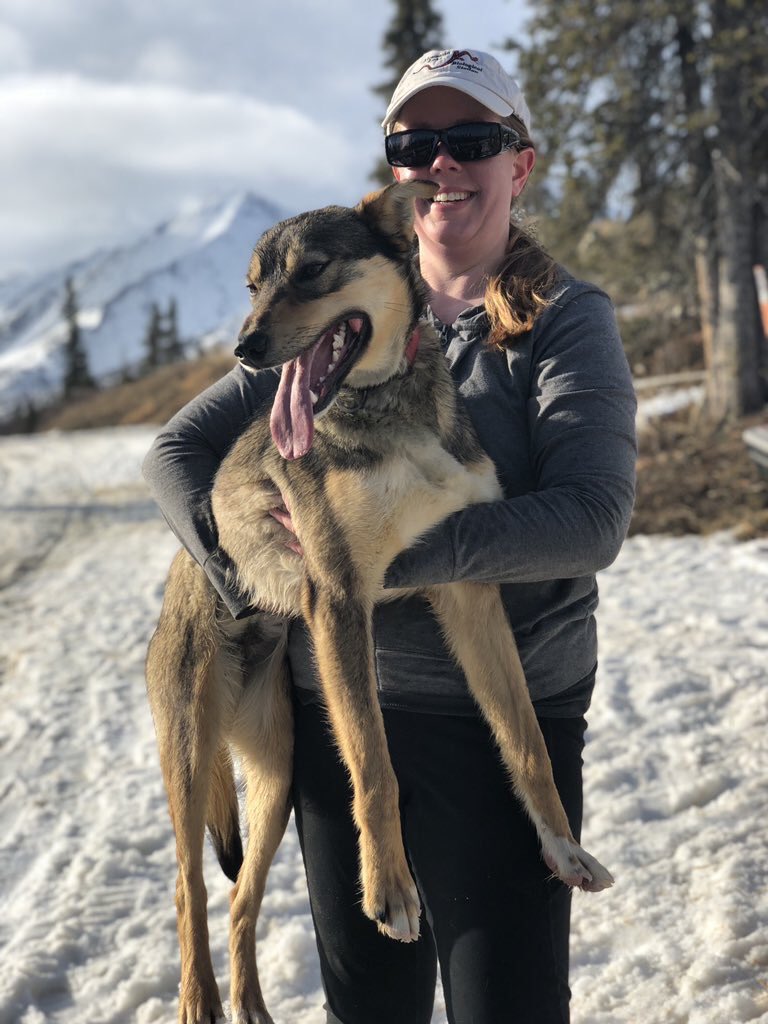 Because he’s so people-oriented, he’s had some special privileges compared to the other yearlings. When we’re on the road, Weegee gets to run around off-leash with the older dogs because we know he’ll stay close to us.

For that reason, I decided to do his training session today a little differently. Instead of running around in the garden with Hari and Refried, we went for a walk with porch sisters Jenga and Flame. 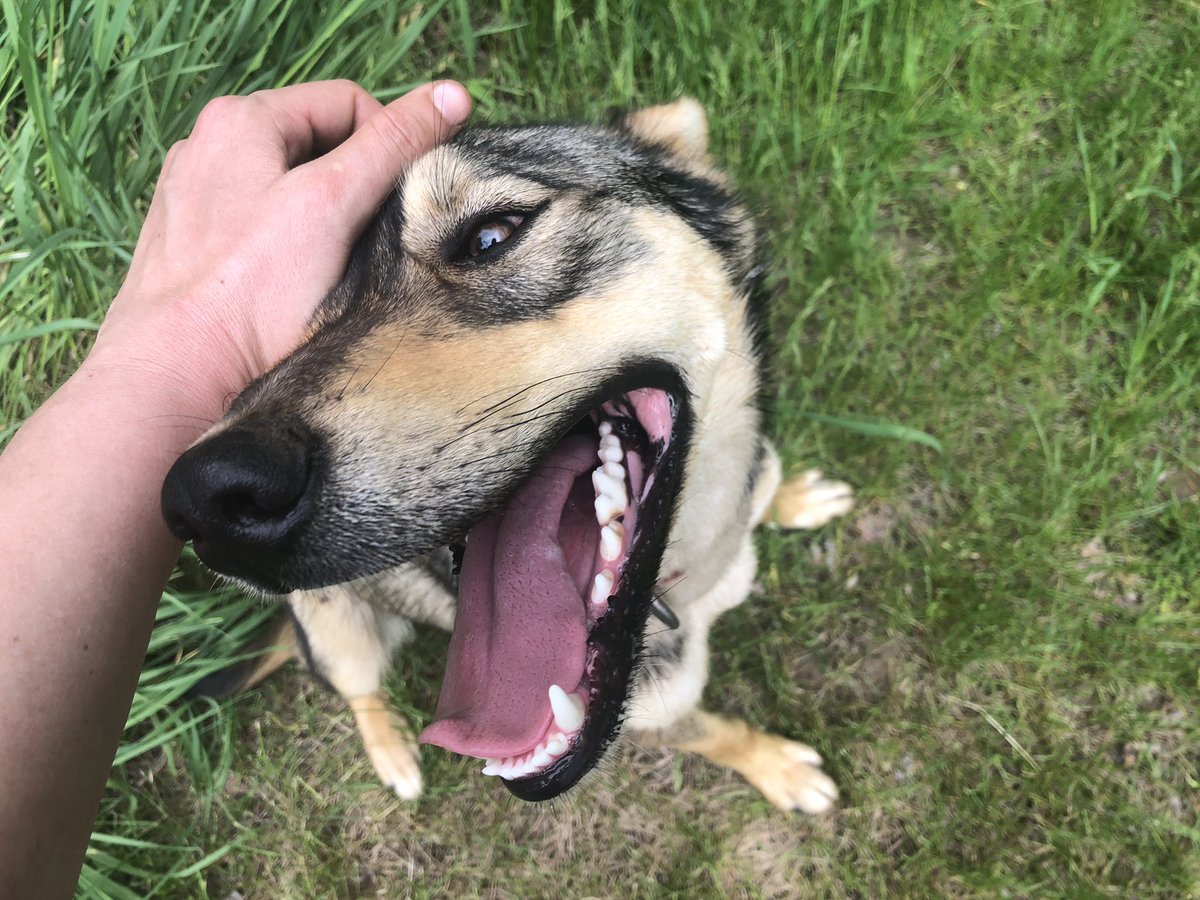 The walk started with some general sniffing. 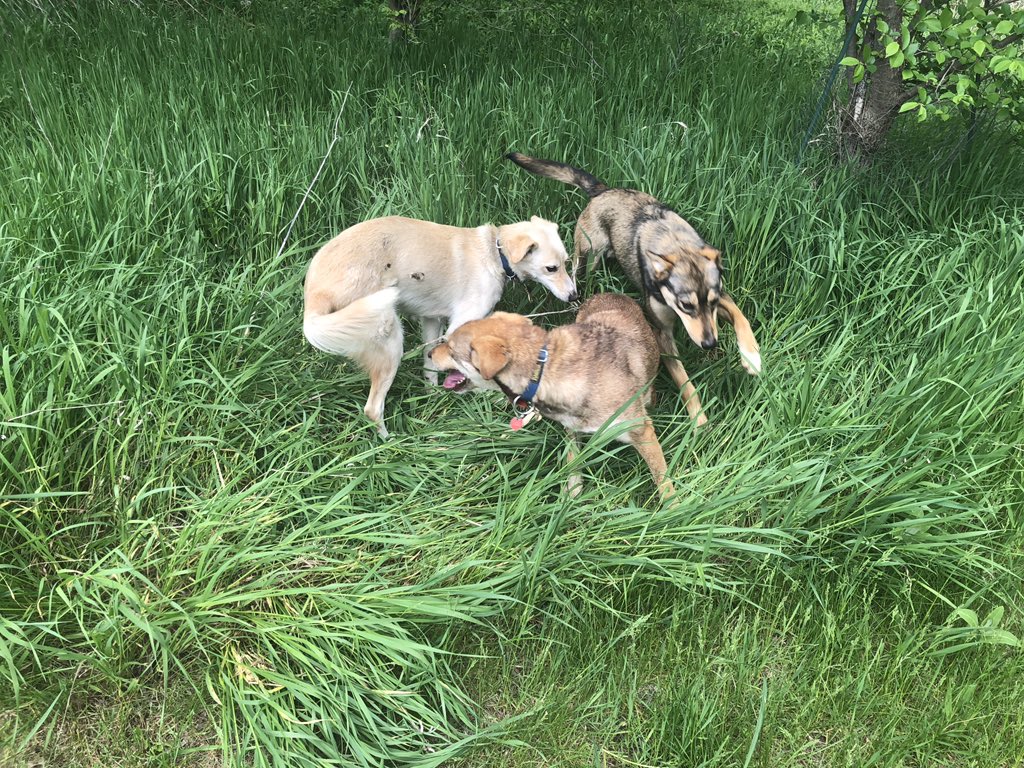 This is probably because they have actual dog social skills, whereas Flame spends all her energy trying to keep other dogs from getting too close to me. 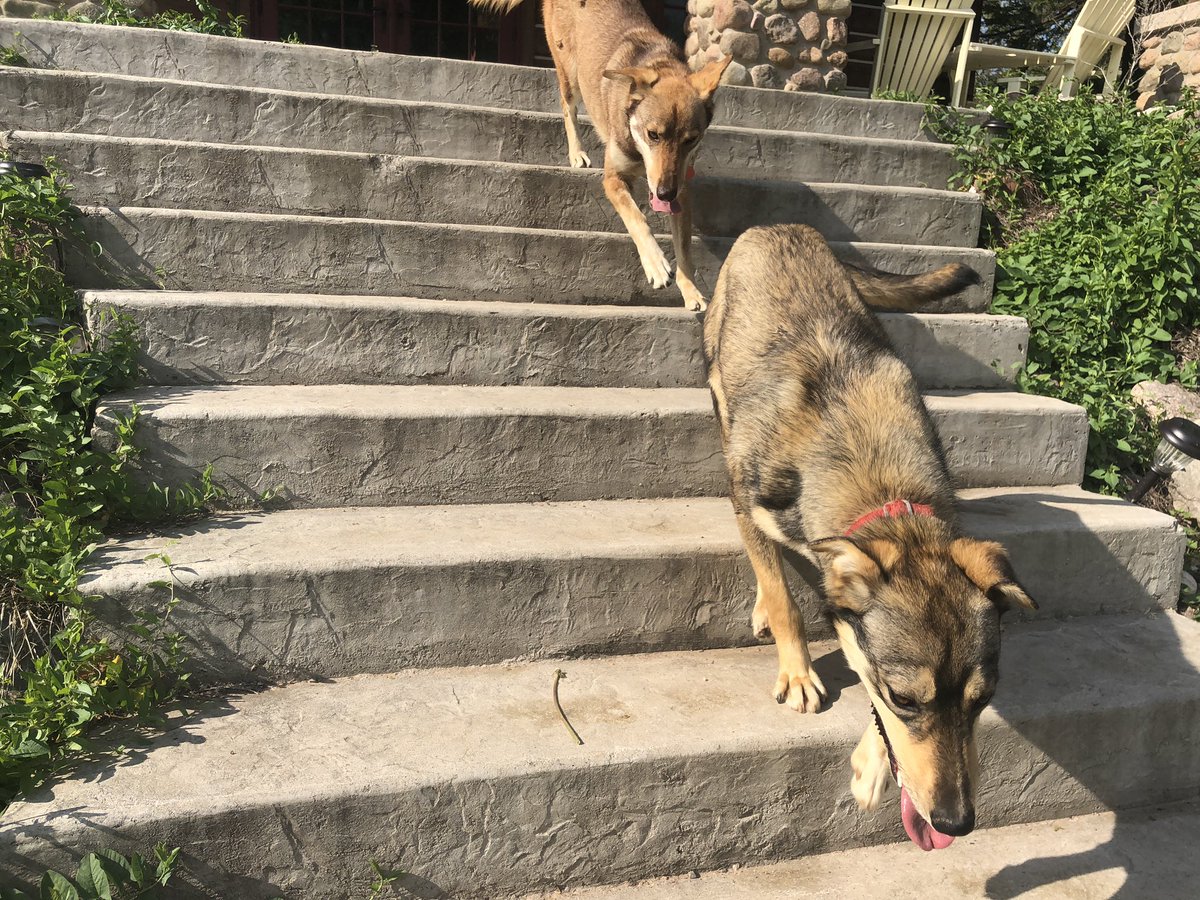 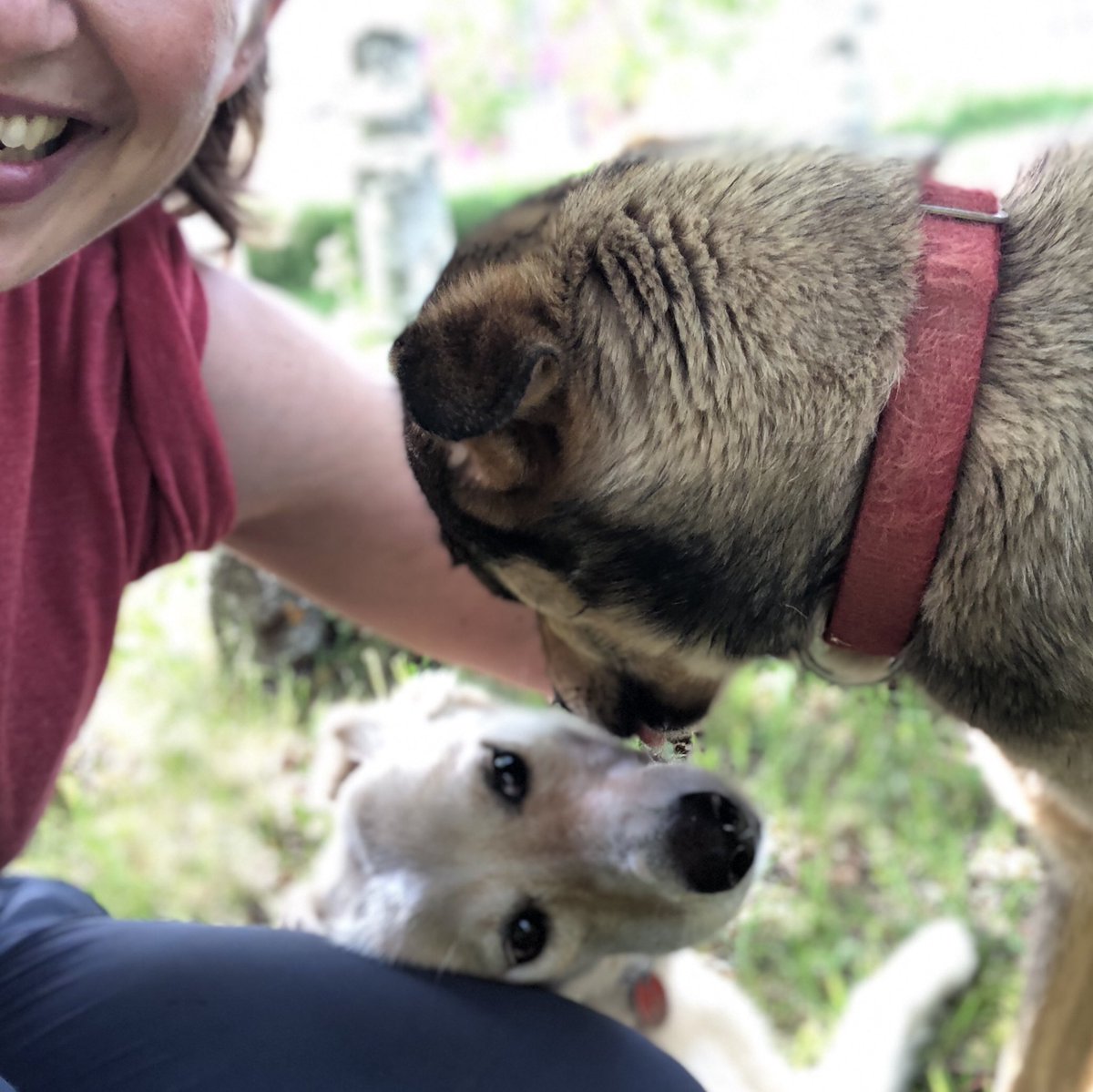 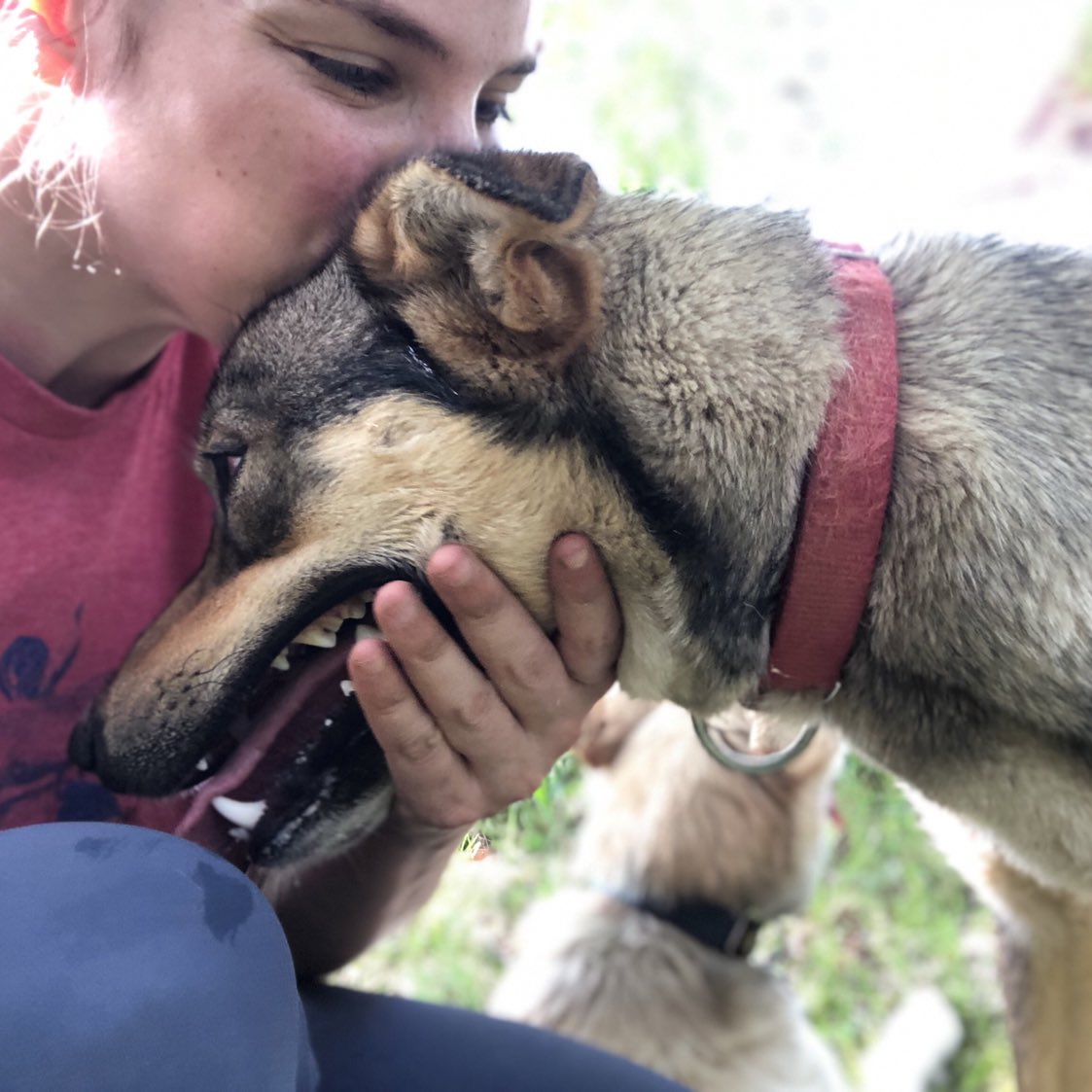 Weegee and the sisters stayed close on the walk, just like I wanted them to.

You may recall that most sled dogs have double-layer coats, with long, water-resistant guard hairs and short downy hairs underneath.

Weegee has interesting fur because he has way more downy hairs than guard hairs. When you look at him, most of the color you see is from his super-soft brown fluff, rather than the long black hairs on top of it. 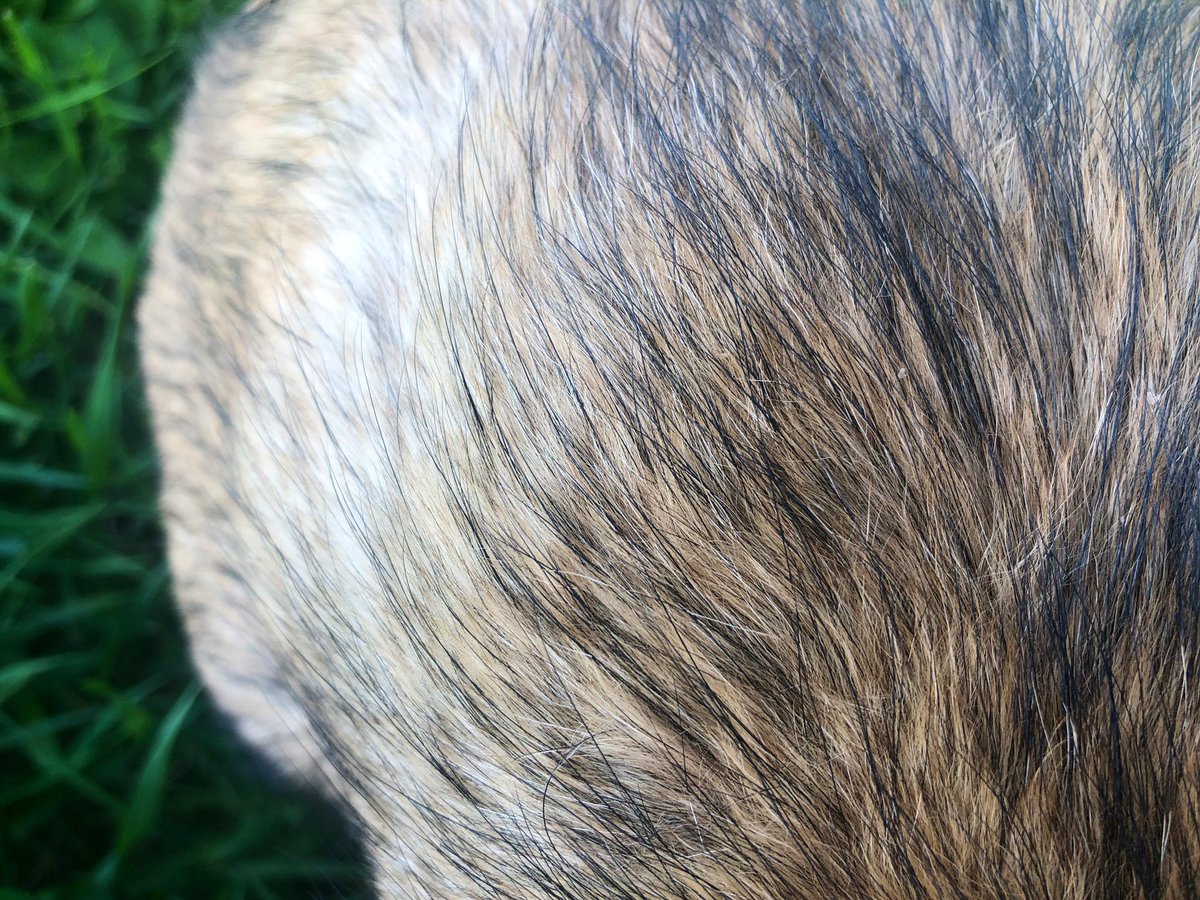 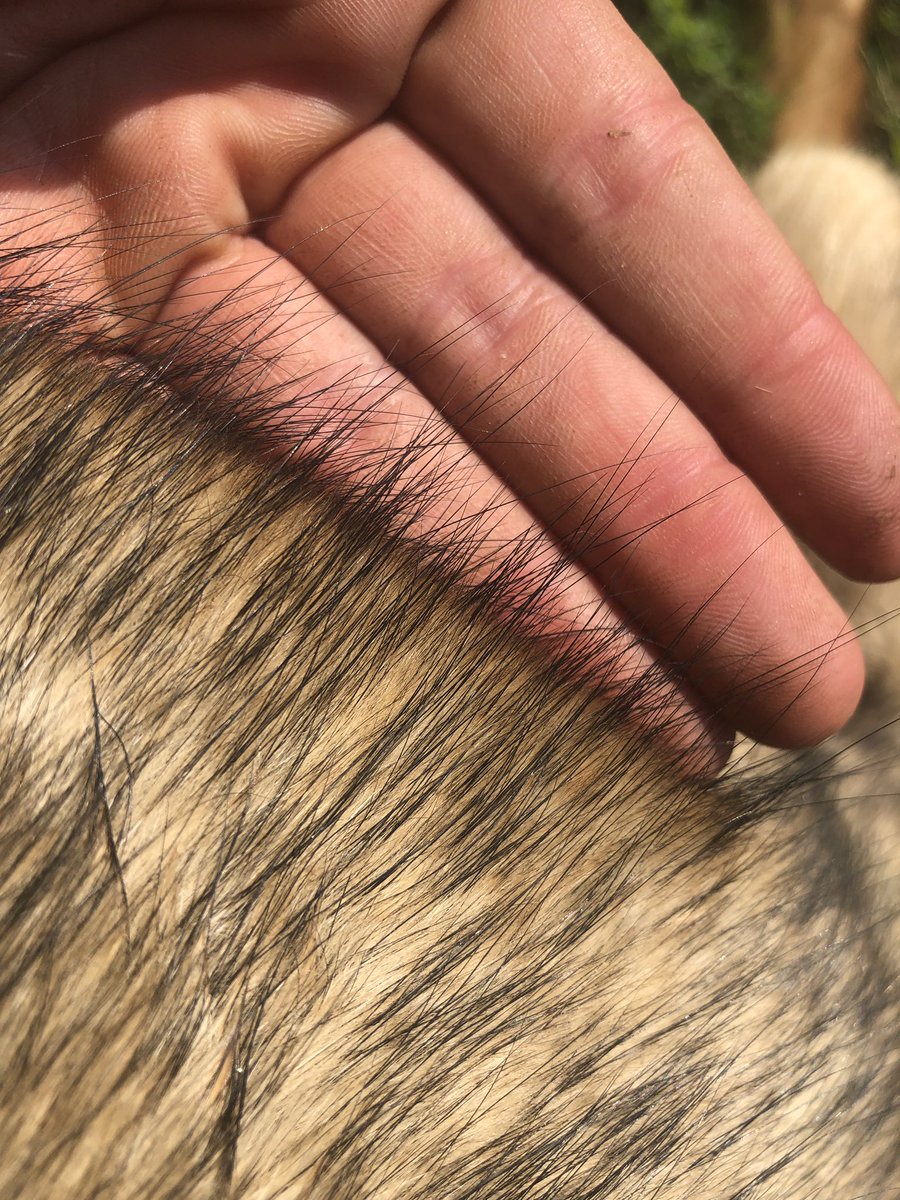 This gives him an exceptionally high Sled Dog Softness Index, scoring an all-time high of 14 in the winter, when his fluff is most developed.

In the summer, when he has less fluff, he scores a respectable 10. 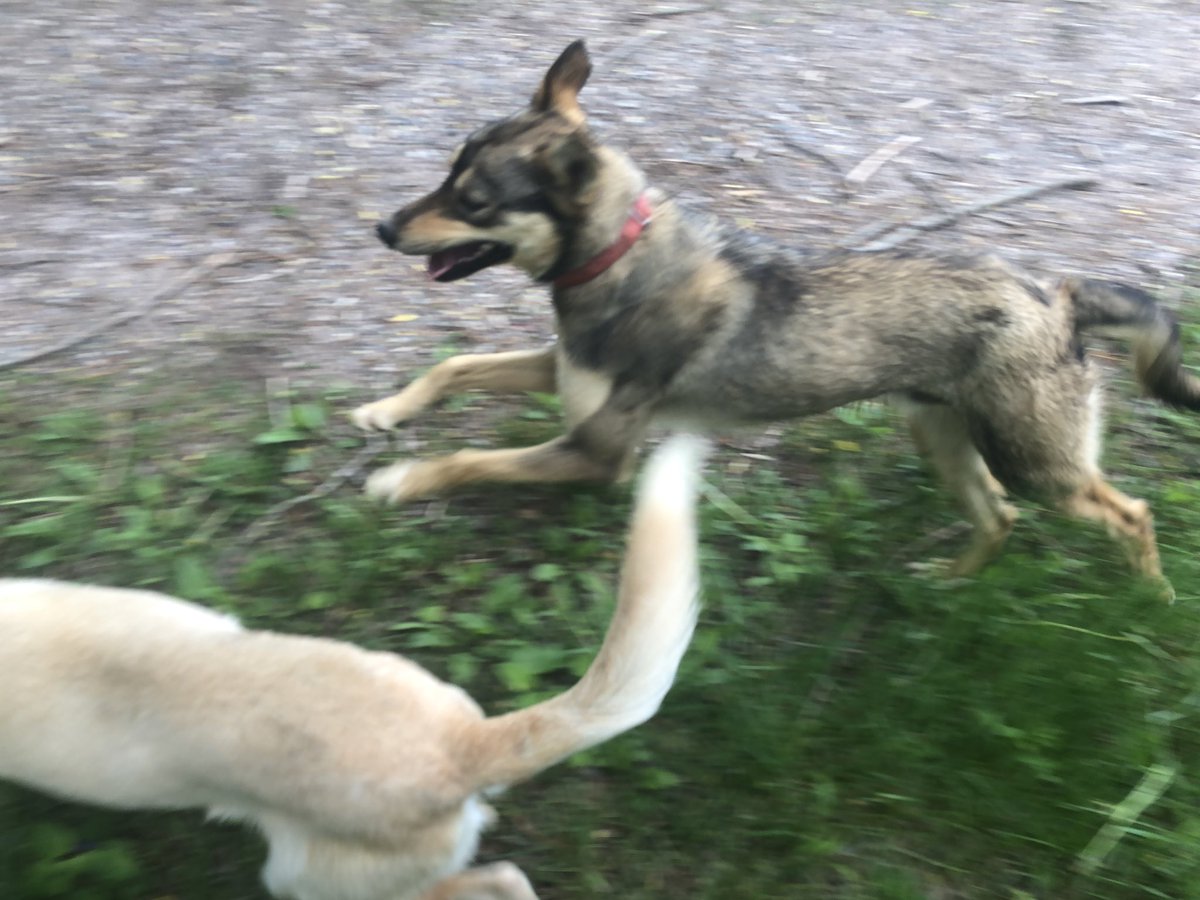 After our walk, we came back to the yard to cool off and pee on things. 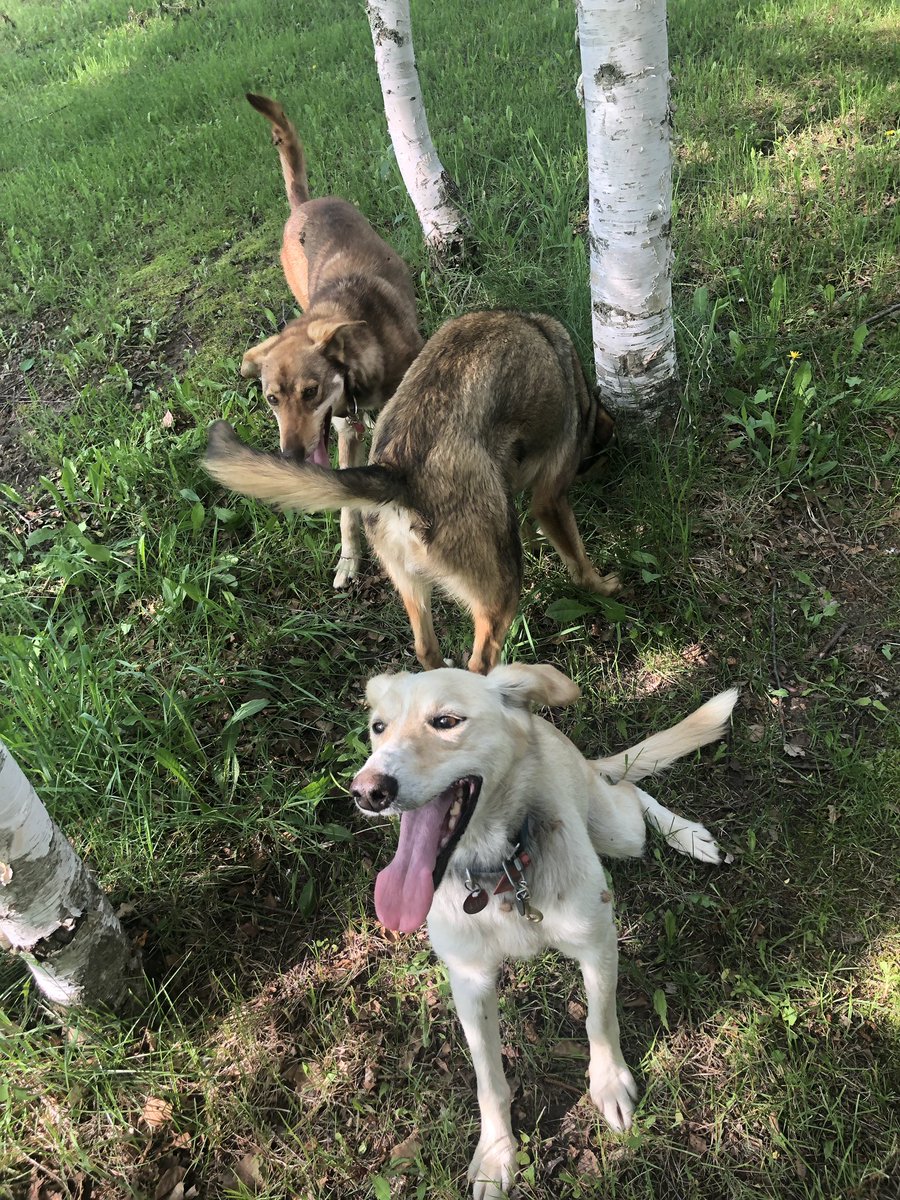 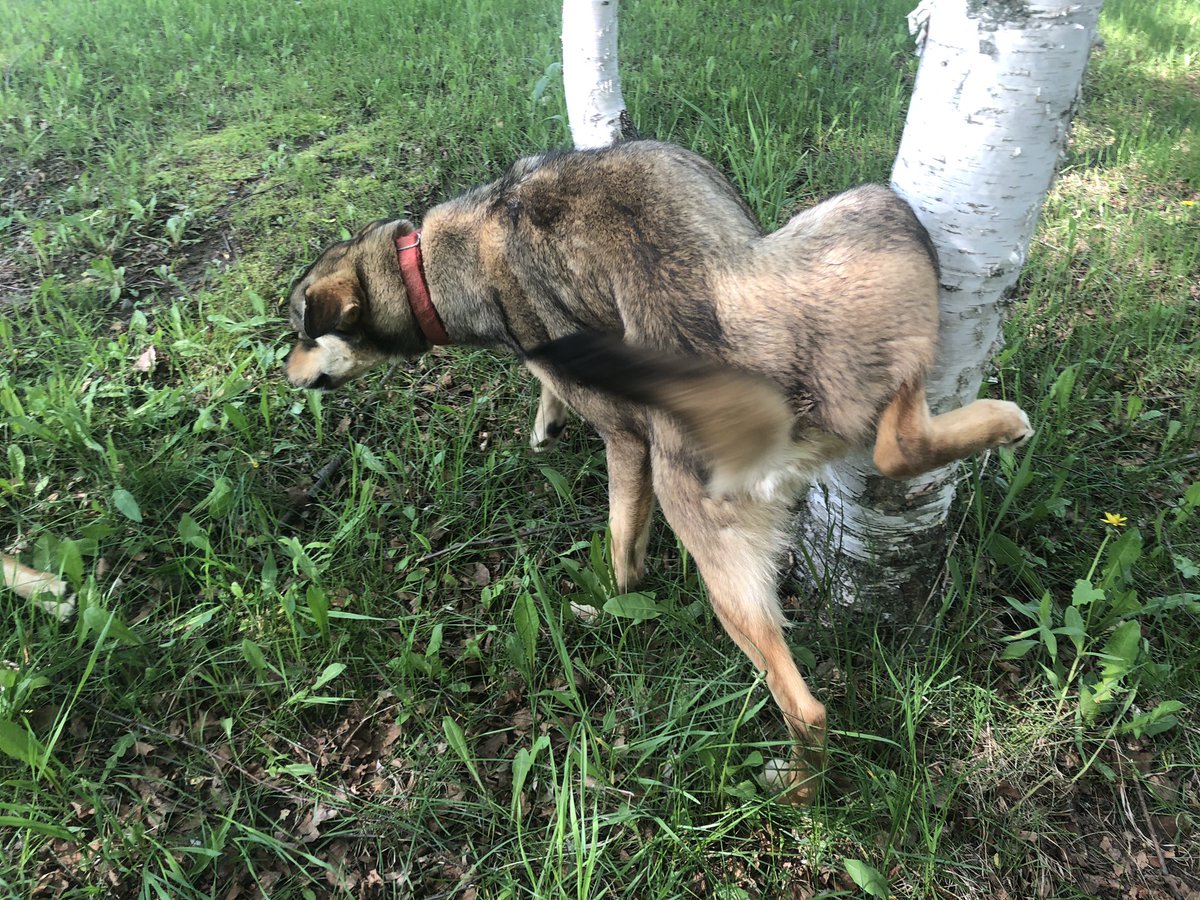 The dogs had gotten into a patch of burrs, so I worked on removing those, too. 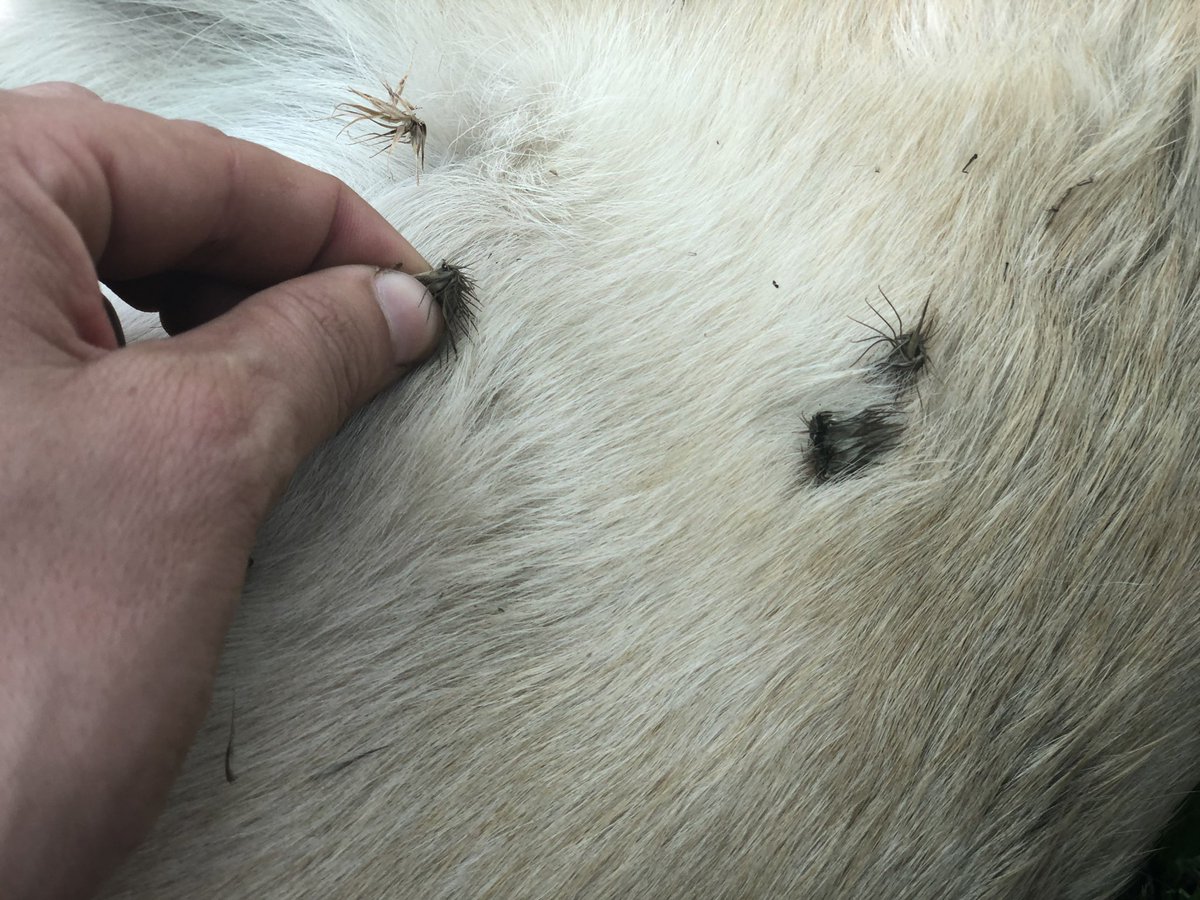 Then something important happened. I’ve noticed lately that Flame hasn’t always been on the porch, but she shows up within seconds when I call her.

Well, she led Jenga and Weegee to her SECRET HIDING SPOT. 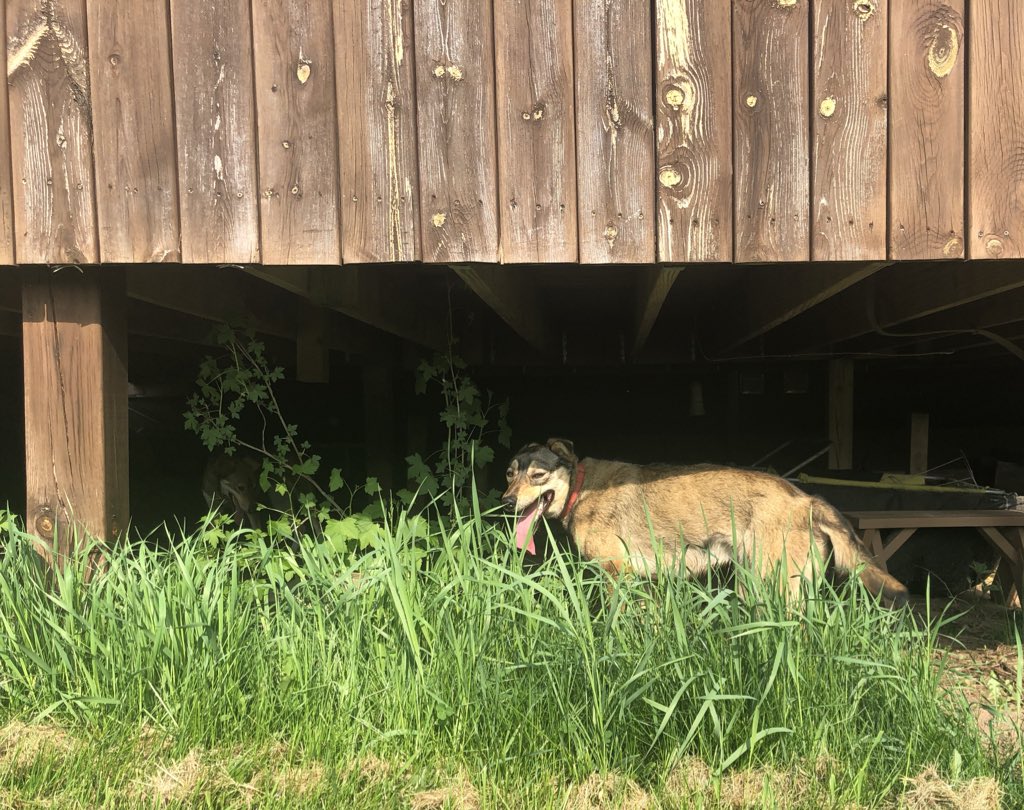 Look at the cool spot they’ve got under there! Flame had already dug a hole to nap in, so Jenga had to make one, too. 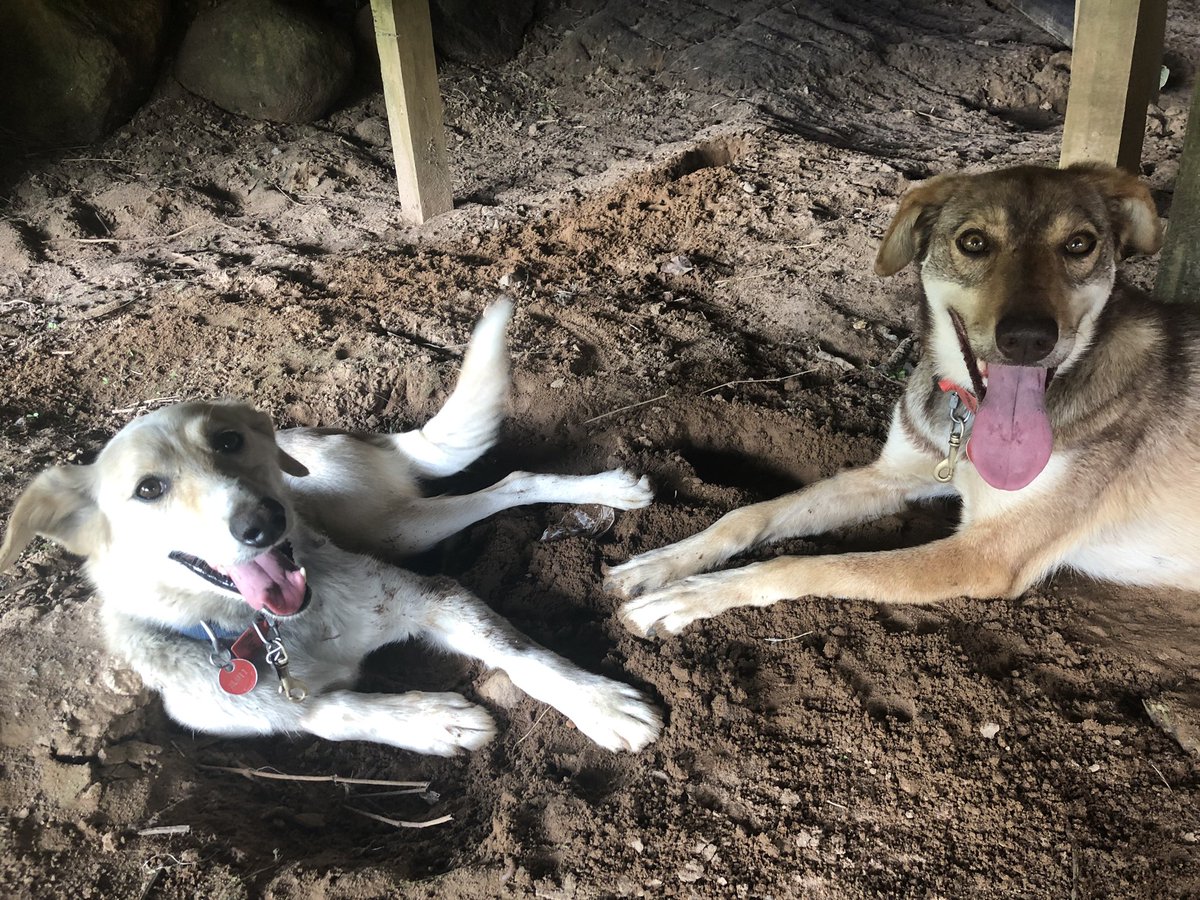 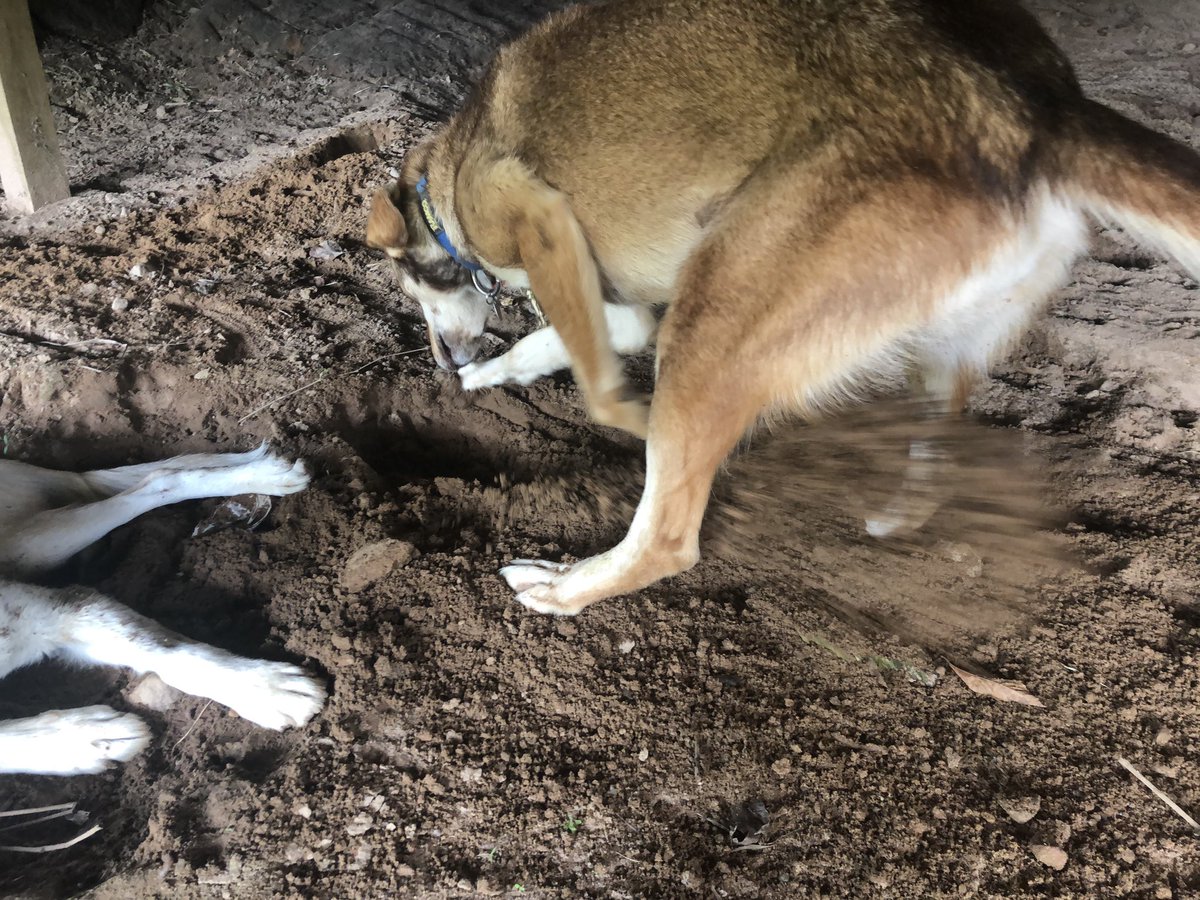 Meanwhile, I gave Weeg a belly rub. He’s already a champ at getting belly rubs. Of course he is, because he’s a very advanced little boy. 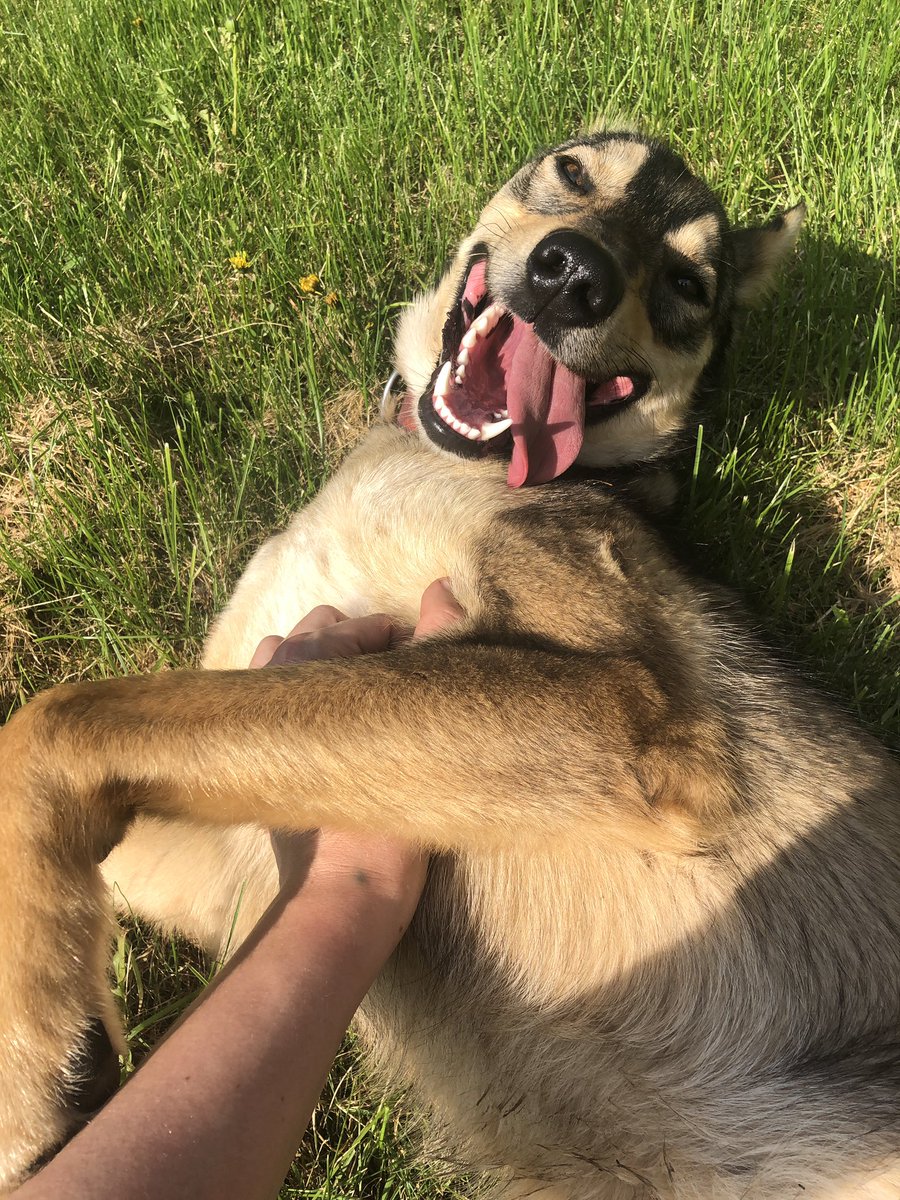 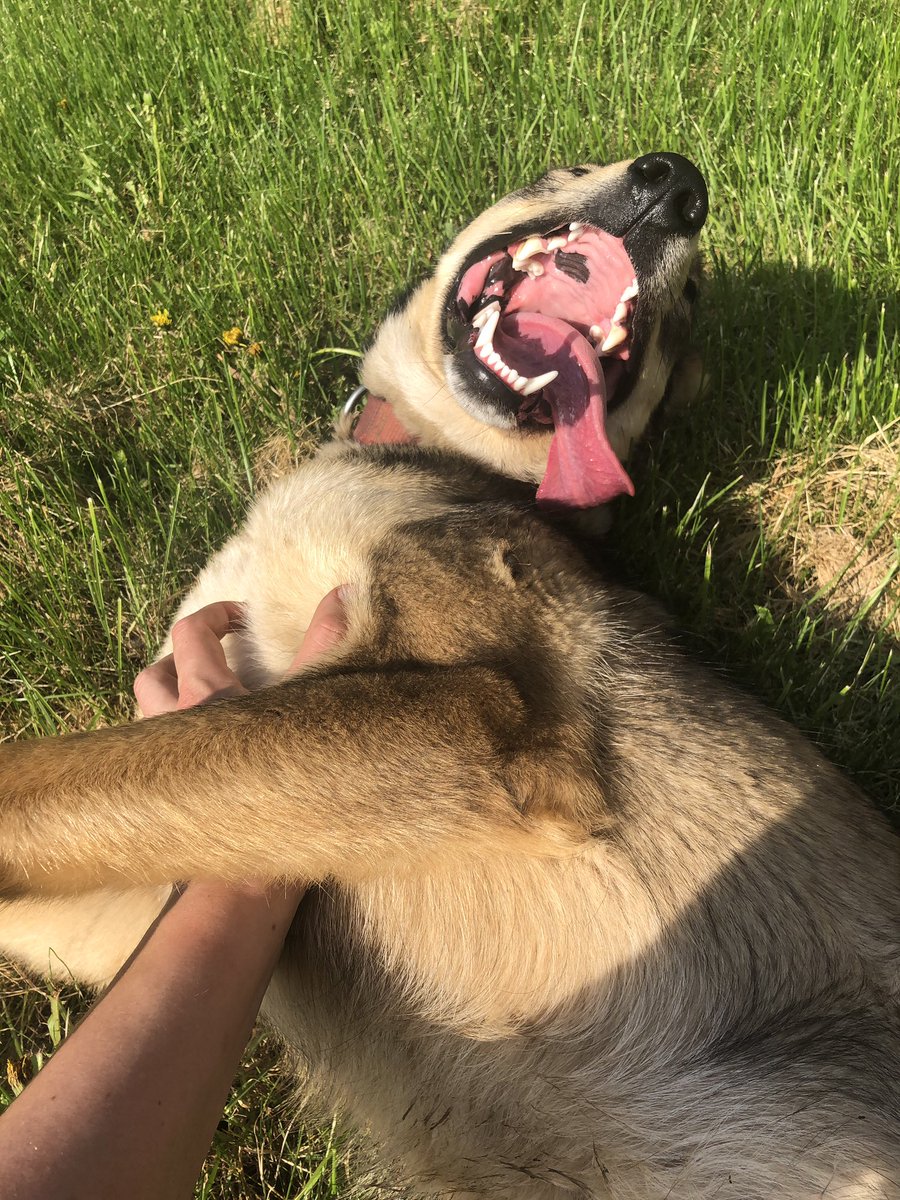