Have you ever wondered why Cyberpunk as a genre is so steeped with Japanese imagery and references? Well it's not just flavour text, it's xenophobia! That's right, I'm here to put politics in your videosgame! 👺

If you've watched the Cyberpunk 2077 cinematic it kinda pops out at you, Japanese imagery, not just the main character having this cyber-oni samurai jacket, it's there in billboards and company names. It's basic cyberpunk imagery you'd seen before in Blade Runner or the like. 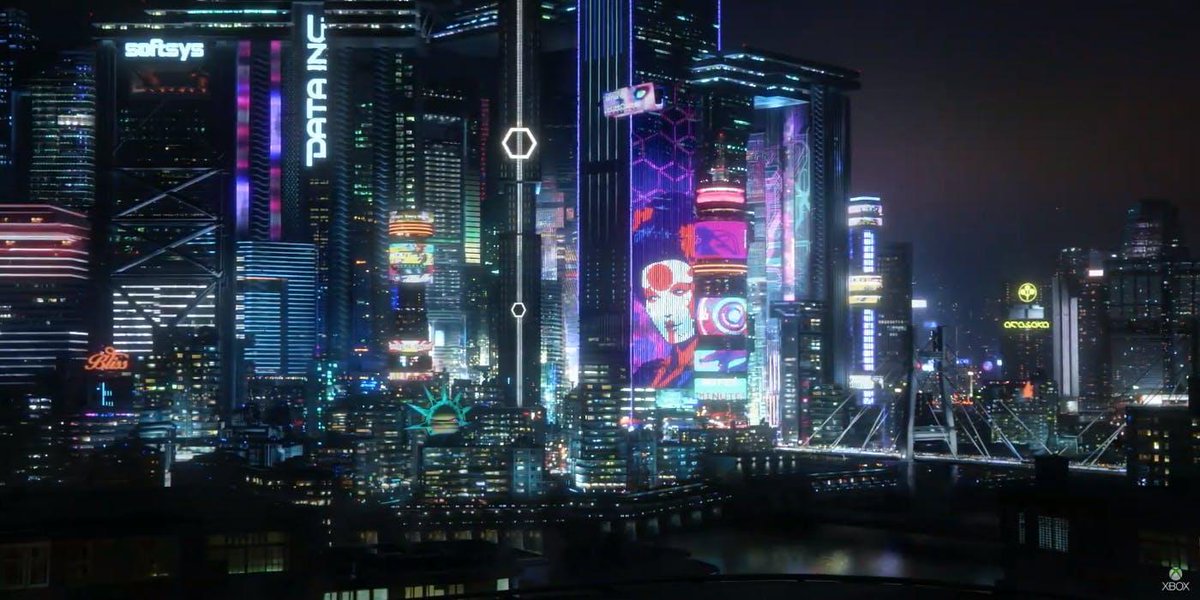 Now I want to be clear that I'm not just talking about the game, but the cyberpunk genre as a whole. See for example Shadowrun and the "Street Samurai" class. It's part and parcel of the genre, there's allusions to Japanese cultural influence over the settings. It's a thing. 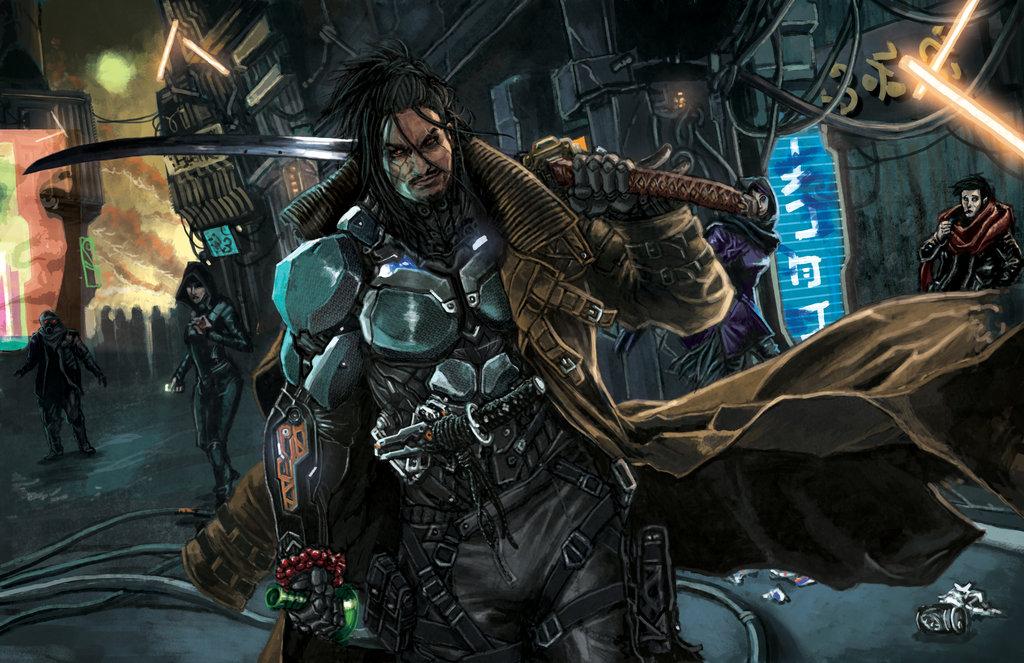 Also, I would point out that I am *NOT* saying that Cyberpunk is racist, not that that's going to matter to anyone who wants to have a bad-faith reading of what I'm saying and decides to do a 30-min Youtube rant about how "SJWs call Cyberpunk racist!"

But what I *AM* doing, is trying to provide a little context for why the prevalence of Japanese imagery as flavour in cyberpunk media is a thing. And for this, you need to cast your minds back to the 80's, when Japan was seen by many as a terrifying and aggressive economic force.

This is something that was everywhere in media during those days so let's use Die Hard as a touchstone here, the newly constructed Nakatomi Plaza being the setting, they were the company Hans & Co. wanted to steal from. Subtext; the Japanese company had the big moneys.

Die Hard aged really well, and if watched today you probably wouldn't pick up on the... how shall I say, "economic anxieties" of the day. Other films are a little more on the nose.

See for example Black Rain and yakuza just murdering people in the open.

Another example being Rising Sun, which is... wow, it's something. That fear of Japanese influence, it is steeped with xenophobic notions of Japanese business bringing crime, of Yakuza being lawless and untouchable by the cops? In a word, yikes.

The 1989 Punisher movie was even more blunt with this, and I kid you not, saw Frank Castle put aside his differences with the mafia to team up and take on the Yakuza. Like, that's actually the plot. Japanese companies as fronts for organised crime is a running theme in the 80's. 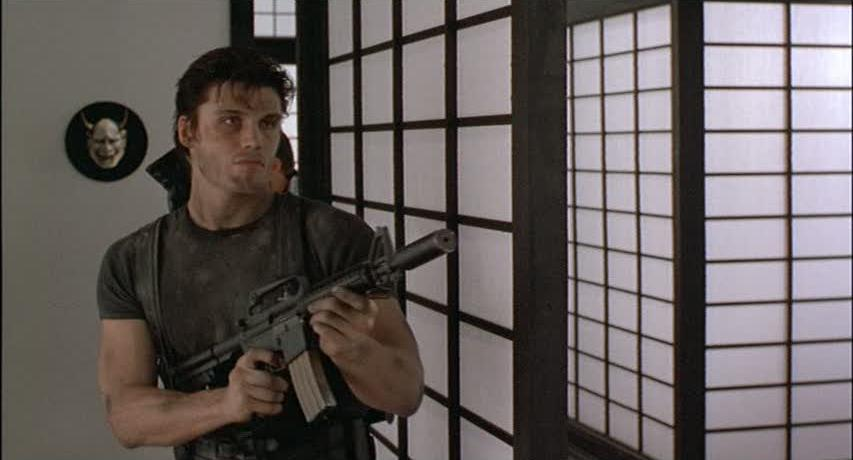 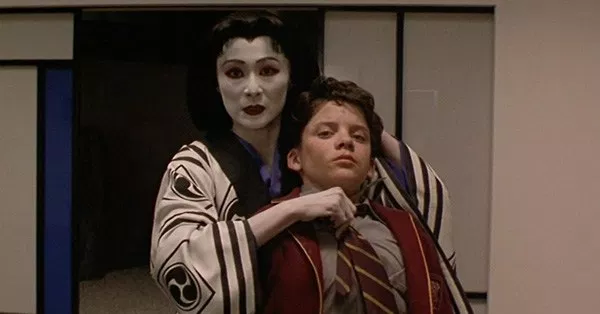 Now, I could go on all day with this, setting the tone of 80's paranoia about Japan as a cultural and economic force, and while I say 80's it continued into the 90's and there's plenty of examples in the 70's too... But I need to move along already, so let's talk dystopia.

You see, a lot of science fiction from that era extrapolated that Japan was a behemoth that would never stop, Japan would eventually own everything and become the dominant cultural force. That's what we often see in cyberpunk dystopia; Japan owns all this shit now.

Those massive billboards in Blade Runner? They came out of a culture of fear that Japan would subsume America, and that Japanese women would supplant white American women as the standard of beauty. This was meant to be scary and dystopian to 80's audiences.

The idea of the average joe eating with chopsticks? That's your dystopia; that everyone would be forced to conform to foreign cultural norms. Now we might look at a scene like that and not even blink, but back then? 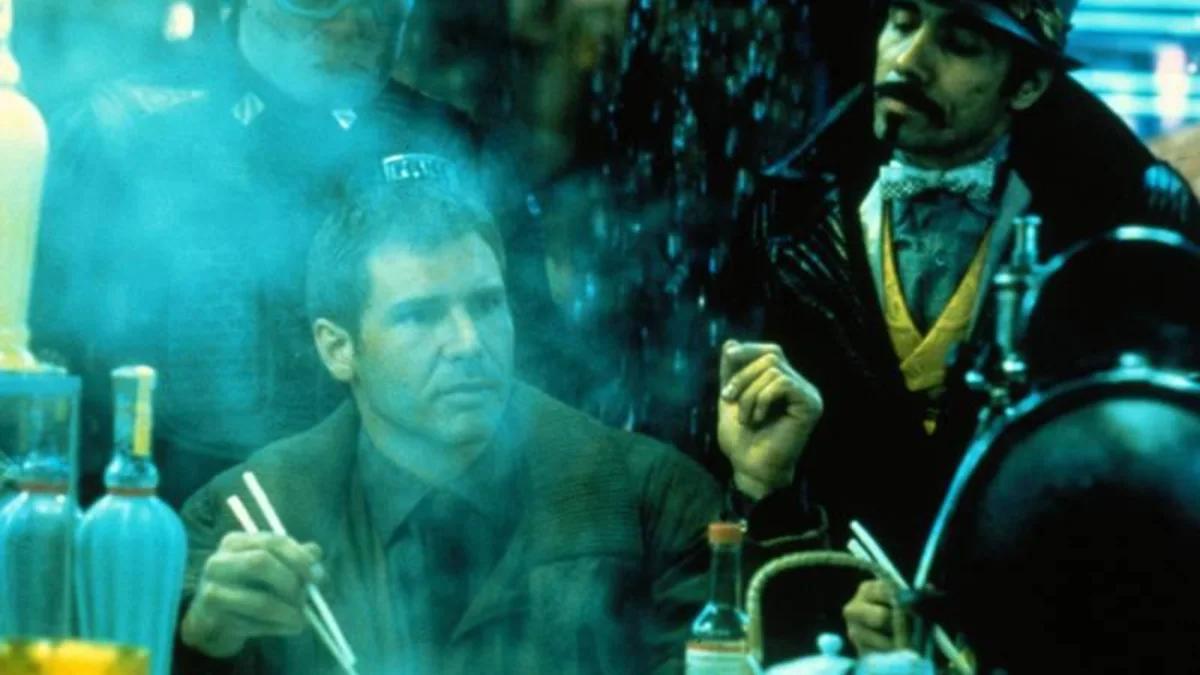 Cyberpunk settings, with the glowing neon billboards and dense cityscapes, it comes from a cultural fear that everything would look like Osaka eventually. 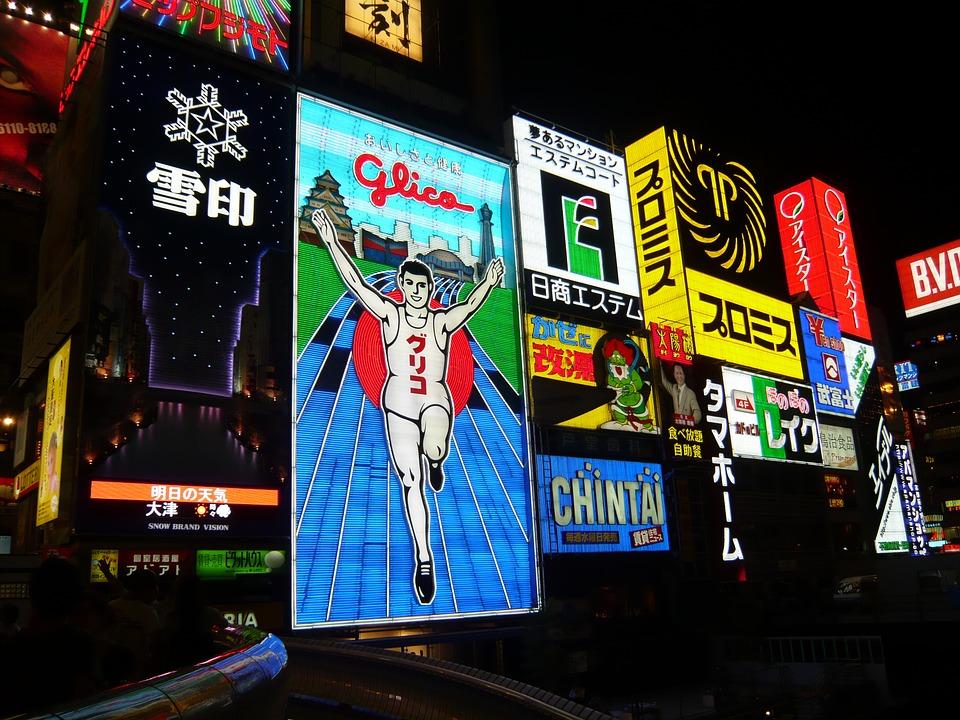 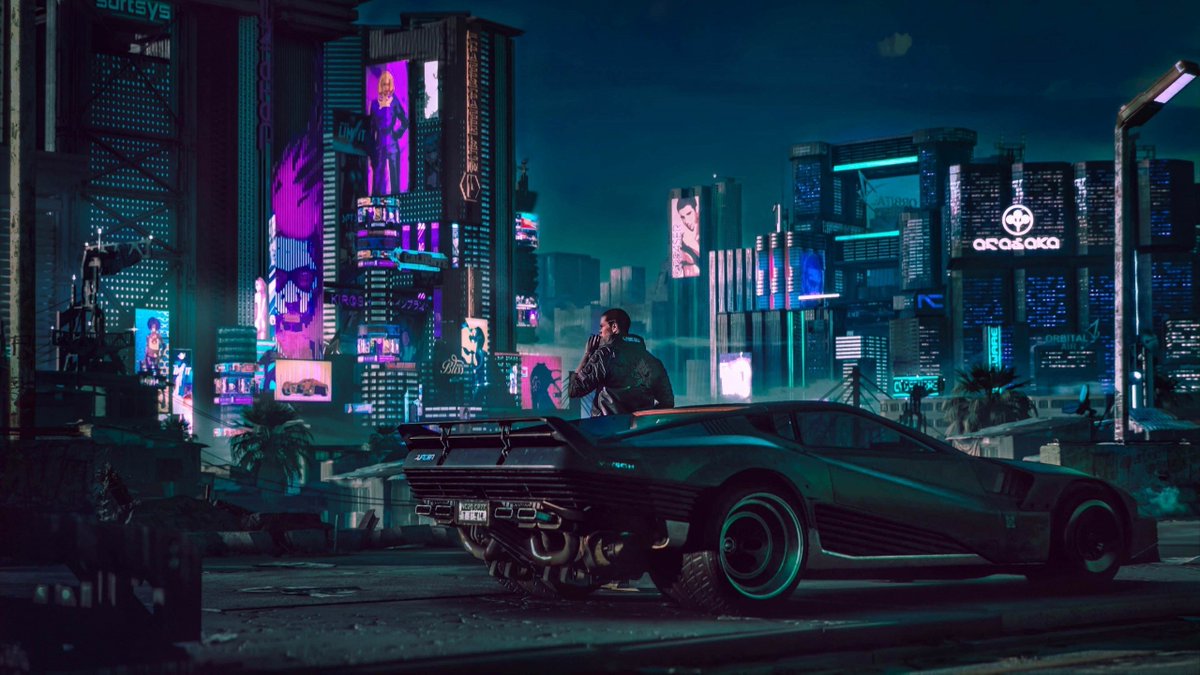 As a genre, I feel Cyberpunk exists as retro-futurism.

It's a continuation of what 80's culture thought the future would look like, and as such it is extremely referential to 80's imagery, without necessarily copying the xenophobic cultural commentary that it was steeped in. 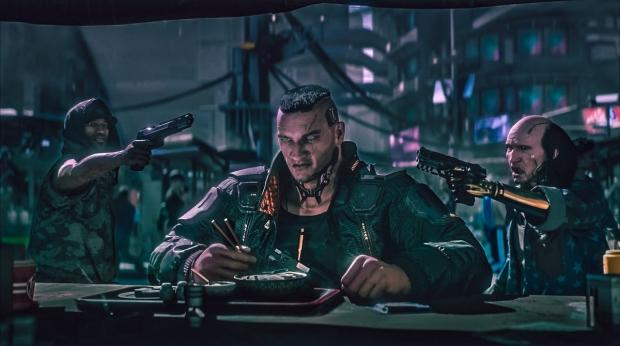 And I kind of think that a lot of people today don't realize just how racist people were about Japanese people back then, someone I know has an uncle who because he took a job with a Japanese company, his own father wouldn't speak to him for over a decade.

Again, I cannot underpin how freakin' weird 80's culture was about Japan... I mean, I'll leave this here with no further commentary.

So, if you've ever wondered why Cyberpunk as a genre is so steeped in Japanese imagery, this is why. The 80's was freakin' weird about Japan, and the cultural anxieties of the day fed into imagined dystopian futures where Japan was the dominant economic and cultural force.

Wow this continues to absolutely explode!

Please consider giving me a follow on Twitch! I play games and talk about stuff, sometimes I have guests on.

As an addendum, I'd like to talk a little bit about where anime fits into this, because a lot of folks are asking about Akira or Ghost in the Shell, and I think the advent of anime as a cultural phenomenon in the west largely reframed how we read Japanese imagery in older media.

I didn't touch on this because the thread was focused on foundational work and the cultural attitudes it was produced in. The genre had already been well established before western audiences were introduced to anime.

Keep in mind, Akira only got a limited US release in Dec 1989.

For most folks seeing Akira in the west for the first time, it was well into the 90's already and it was on VHS. In terms of establishing the genre tropes, Blade Runner was a mainstream film and theatrically released in 1982, it had the best part of a decade on Akira.

Keep in mind, Ghost in the Shell came out the same year as Johnny Mnemonic, and the overly tropish nature of the story was by then already dated; Yakuza enforcing corporate law. Western cyberpunk by then was somewhat oldhat, and well established. 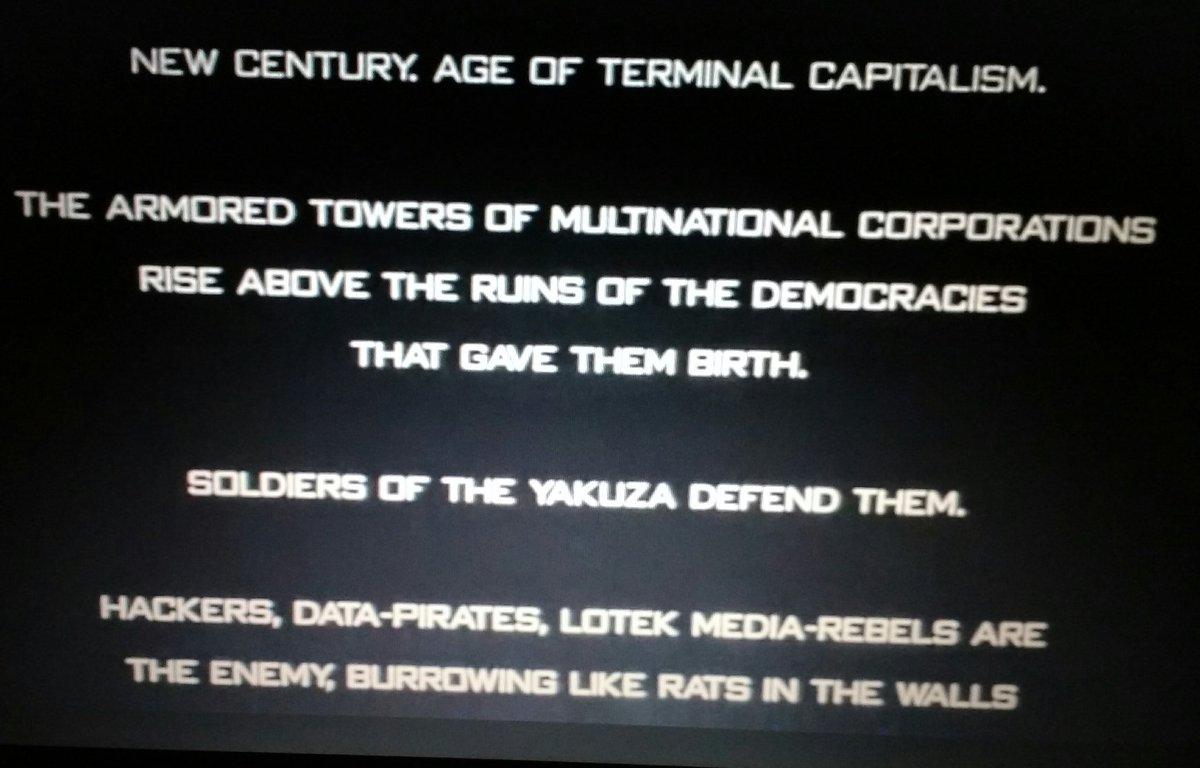 That is by no means to undercut the profound influence Ghost in the Shell had on sci-fi and popular culture since. Don't me started, 'cos I could go on at length about how anime has influenced mainstream cinema, in fact I have done plenty in the past...