NBC News+ Your Authors @NBCNews The leading source of global news and info for more than 75 years. Jun. 17, 2019 1 min read + Your Authors

This story was produced in partnership with @CivilEats, a nonprofit news organization focused on the American food system.  https://nbcnews.to/2XlCGT2  (1/6)

Years of climate change-fueled drought and a 240% increase in dust storms appear to have led to a swift rise in the number of people diagnosed across the Southwest. (2/6)

Getting an accurate count of the number of people affected is a challenge because many of those infected never know they have it.

However, new cases are especially concentrated in the San Joaquin Valley, home to the farms that produce 2/3 of the nation’s fruit and nuts. (3/6) 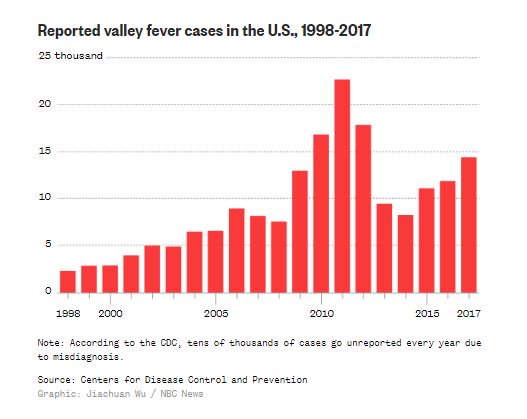 The region is also home to the two cities with the worst particle pollution in the U.S. and most of the state’s farmworkers. “The valley fever fungus might actually expand its territory with climate change,” says Antje Lauer, a microbial ecologist. 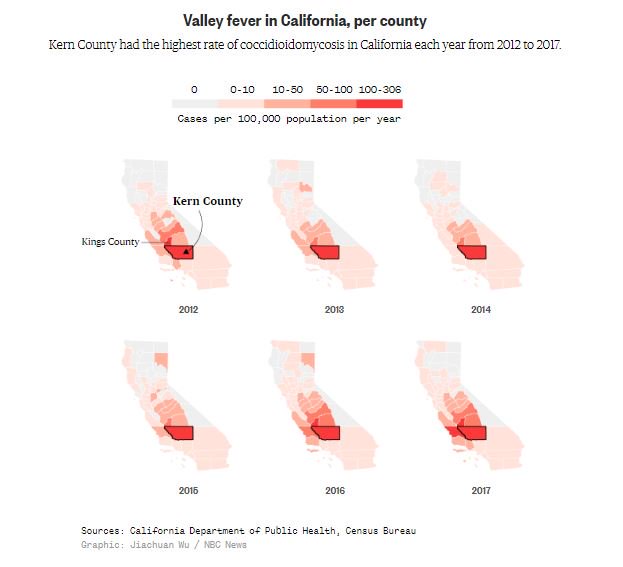 An estimated 49% of the state’s farmworkers lack work authorization and most live under the federal poverty line in unincorporated communities with few public services.  http://nbcnews.to/2XlCGT2  (5/6)

Vaccines are in the works, but it’s unclear how close they are to being tested on humans. 3 members of Congress recently introduced a bill in effort to increase awareness of the disease.